What Indonesia can teach the world 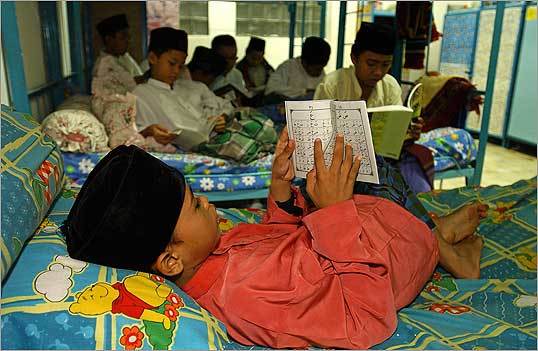 At times this summer, much of the Muslim world seemed at war with itself. In Iran, protesters furious over what they viewed as a stolen election spilled into the streets and were met with a brutal security crackdown. In Pakistan, powerful Taliban-type militant groups battled the army. In neighboring Afghanistan, opposition leader Abdullah Abdullah and local tribal leaders accused President Hamid Karzai of stealing the national election.

Farther south, the world’s largest Muslim nation, Indonesia, received far less attention. Yet what happened there in July ultimately could prove far more important than the meltdowns in Afghanistan or Pakistan or Iran. Some 100 million Indonesians, spread across a vast archipelago, went to the polls, and in a free and fair vote, they reelected president Susilo Bambang Yudhoyono, leader of the secular Democrat Party. Hard-line Islamic parties fielded candidates as well, but they barely registered at the polls, gaining less of the vote than they had in the previous national election five years ago.

Yudhoyono’s reelection was only the capstone of a triumphant decade for Indonesia. Despite its vast size and remote terrain - it is the world’s fourth-largest nation by population, its 240 million people spread across thousands of islands between the Indian Ocean and the Pacific - Indonesia has become a rock of political stability in a turbulent region. After decades of military dictatorship, and the threat of Islamism in the late 1990s, Indonesia is today ruled by a coalition that mixes secular and moderate Islamic parties and protects minority rights. And at a time when countries from Japan to Singapore are struggling, Indonesia posted some of the strongest growth in Asia this year. The nation’s occasional terrorist attacks haven’t succeeded in destabilizing the government, which has steadily built a reputation for good governance and an effective battle against militant groups.

“If you want to know whether Islam, democracy, modernity and women’s rights can coexist, go to Indonesia,” Secretary of State Hillary Clinton said on a trip to Southeast Asia earlier this year.

Though Indonesian leaders themselves are hesitant to lecture other countries, their model could offer lessons for nations from Pakistan to Morocco. It has managed to create a stable political system without using its military to guarantee secular rule, as does Turkey. The militant Islamic groups that once seemed to threaten the country’s future have been crushed or co-opted. And it has adopted modern anti-terrorism techniques that appear to be working. In its success, Indonesia also offers the United States, constantly seeking ways to help build stable societies in the Arab-Muslim world, a model for cooperation and moderation.

Just a decade ago, few would have seen Indonesia as a model of any kind. The country was an economic and political basket case, riddled with graft from the era of its longtime dictator Suharto. Its heavily export-dependent economy collapsed in the Asian financial crisis of the late 1990s, plunging the country into political chaos.

Riots constantly blocked the streets of Jakarta, with many protests targeting the ethnic Chinese community. Warfare erupted in outlying provinces like Aceh, which long had wanted to secede. Hard-line Islamist groups preyed upon this unrest, promising cleaner government against the corruption of Indonesia’s traditional political parties. Islamic schools, known as pesantrens and similar to madrasas, expanded to fill the void left by underfunded public schools. Some of these became notorious for promoting militant Islam, according to an analysis by the International Crisis Group, developing into feeders for the terrorist organization Jemaah Islamiah.

In the late 1990s and early 2000s, this and other expanding militant groups seemed on the verge of threatening the government’s control of parts of the country, a situation similar to Afghanistan or Yemen today. In 2002, Jemaah Islamiah masterminded a bombing in Bali that killed over 200 people, and then allegedly bombed the JW Marriott hotel and the Australian embassy in Jakarta, among other sites. Indonesia seemed on the verge of disintegrating, torn apart by separatist movements and inter-ethnic battles.

By the time of Yudhoyono’s reelection, this past summer, many of these fears had vanished. The economy had recovered, the archipelago no longer appeared on the verge of fragmenting politically, and terror groups had been prosecuted and weakened. The country had held three successive free elections.

How did Indonesia develop into a success, while countries such as Egypt, Pakistan, and Saudi Arabia still struggle just to build the fundamentals of democracy? For one, Indonesia’s presidents have not allowed sharia law, the religiously derived legal system that prevails in numerous Muslim countries, to gain a foothold, except in a few isolated regions. Neighboring Malaysia, by contrast, allows several of its states to apply sharia to many issues of family law and other civil cases - a system that can alienate non-Muslim minorities, undermining the principle that democracy protects minority rights. (Recently, the Malaysian blogosphere has been fixated on the case of an Indian Hindu woman who, under sharia law, has been sentenced to caning for drinking beer.) In Indonesia, where an ethnic Chinese minority coexists warily with an ethnic Malay majority, the assurance of minority rights is critical to preventing the kind of internal violence that has racked other Muslim nations, from Pakistan (Shia vs. Sunni) to Yemen (northernerns vs. southerners). Assurance of minority rights boosts the economy, too, since the ethnic Chinese, though a minority, control an outsized percentage of powerful companies in Indonesia.

Unlike many other Muslim countries, Indonesia’s leaders have also resisted the temptation to use the national treasury to promote their preferred version of Islam. Yudhoyono and his two predecessors, Megawati Sukarnoputri and Abdurrahman Wahid, took pains to emphasize that there was no state-preferred mosque or spiritual leader. This strategy stands in sharp contrast to Saudi Arabia, where the government plays a major role in overseeing clerics - or even to Pakistan, where former president Mohammad Zia ul-Haq used the power and the purse of the state to institute laws consistent with sharia and pack the courts with Muslim scholars he considered allies.

Even more important, the Indonesian government has also set out to undercut the popular appeal of militancy. Rather than letting Islamic parties run on promises to improve the lives of the poor, Yudhoyono has overseen a massive national anti-poverty program, increasing direct cash transfers and rice subsidies to the poor. Besides winning hearts and votes, these handouts sparked consumer spending, critical at a time when exports to the West are lagging. They also reduced poor families’ dependence on Islamic boarding schools for a decent education, a point not grasped in, say, Pakistan, where politicians frequently vow to reform madrasas but spend little time investing in public education to give families other options.

Under Yudhoyono the Indonesian government also has allowed some of its power to devolve to provinces and cities throughout the archipelago, giving them greater shares of the national budget, more control over local natural resources and more money back from direct investment in their area. Devolution takes guts, especially in regions of the world accustomed to a strong, centralized government. But it also pays several rewards, reducing separatist tensions and giving average people more personal investment in the democratic process. Devolution also encourages provinces and cities to become more economically competitive.

Yudhoyono’s government has also denied the Islamists another of their biggest recruiting tools: public anger at corruption. The president has backed the national counter-corruption agency, and unlike his predecessors, has stayed out of the courts’ way. Last spring, just before the presidential election, a close relative and former governor of the Bank of Indonesia was convicted of embezzlement and sentenced to jail time, shocking many Indonesians who were accustomed to seeing the powerful protect their relatives and inner circle.

Indonesia also has pursued a novel strategy against militant groups. The president has made a strong public case that terrorists threaten average Indonesians, not just the West. By pressing this theme, Yudhoyono has managed to turn opinion against militants while deflecting claims that he was just serving the interests of the United States. (In one poll of Indonesians by the organization Terror Free Tomorrow, 74 percent said that terrorist attacks are “never justified.”) The country also has a cutting-edge “deradicalization” policy to stem the growth of militancy. Former terrorists appear on national television to describe the brutality of their crimes and express remorse for killing fellow Indonesians; former militants also approach convicted terrorists in prison, using religious arguments, compassion, and other softer tactics to win them over.

Plenty of problems remain. Conflict still erupts among Indonesia’s many ethnic groups; in the province of West Papua, separatists attacked foreign workers over the summer. Despite Yudhoyono’s poverty programs, much of Indonesia’s population lives below the poverty line. And its military can still make trouble.

Even where they have been successful, many Indonesian leaders are reluctant to be seen as an example to other nations, especially in the Middle East. Indonesia isn’t Arab, and many Arab leaders regard it as a kind of backwater in Islam, making them loath to take lessons from Jakarta. The archipelago also historically practiced a more moderate version of Islam, a religion brought by traders and mixed with local folk practices. The country’s major religious organizations, with tens of millions of members, have been run by leaders committed to the separation of mosque and state.

Still, other Muslim nations are beginning to look at what Indonesia has done right. Saudi Arabia, Yemen, Egypt, and other nations have adopted deradicalization programs of their own. Clerics from across the Muslim world have descended on Indonesia to study its religious organizations and their role in society.

Indonesia’s success offers lessons for the United States as well. Most importantly, it shows that Islam and democracy can mix easily, provided the government can separate mosque and state, and religious leaders are willing to go along. The resulting stability leaves far less room for militant groups, and reduces the need for the US to throw its weight behind iron-fisted military leaders like Pakistan’s Pervez Musharraf just to keep militant Islam from expanding.

In addition, the example of Indonesia suggests that in many cases, America would be wise to intervene less. President Yudhoyono’s counterterrorism policy succeeds in part because local people perceive the policy as run by their president, not pushed on him by any foreign powers. The US, meanwhile, has pitched in by quietly helping fund and train Indonesia’s elite counterterrorism force, known as Detachment 88. But unlike in Pakistan or Yemen or the Philippines, American assistance isn’t prominently covered in the press, or a flashpoint for public anger. It doesn’t hurt that President Obama spent some of his childhood in the country, and today his administration is hugely popular in Indonesia. Almost as popular, that is, as Yudhoyono’s.

Joshua Kurlantzick is a fellow for Southeast Asia at the Council on Foreign Relations. Contact him at jkurlant1@hotmail.com.