Birth of the cooled

The invention of fresh food

Think of the issues people are talking about now in the food world: A healthy diet. Food safety. "Food miles," the ecological cost of transporting what we consume. Locavores, who eat only locally grown food. Seasonal food, organic food; farmed fish, overfished fish; how and where vegetables and meat are grown or raised. All of these have roots in the modern concept of freshness, according to Susanne Freidberg, author of the new book "Fresh: A Perishable History."

It might seem strange to talk of freshness as a modern idea rather than a natural quality, but the notion didn't take shape until the early 20th century, when Americans began keeping perishables in iceboxes and then refrigerators. It's a term that's ever-shifting - what we now consider fresh exists because of the most current technology, treated with chemicals and packaged in materials designed to maximize appearance. Previous generations would have eyed plastic bags of "fresh" pre-cut broccoli or cubed butternut squash with suspicion.

Today freshness wouldn't be possible without a complex web of human tinkering. The calcium citrate formula NatureSeal keeps cut apples pristine for up to 28 days so we needn't slice them ourselves; the company Eggfusion lets producers track each egg's age using laser technology. Refrigeration, one of the food-related technologies we most take for granted, was itself controversial when introduced. To understand freshness, Freidberg argues, is to understand how taste, commerce, and innovation have influenced one another over a century.

"At bottom, the history of freshness reveals much about our uneasy appetites for modern living," writes Freidberg, an associate professor of geography at Dartmouth College who divides her time between Hanover, N.H., and Cambridge. "This culture promotes novelty and nostalgia, obsolescence and shelf life, indulgence and discipline. It surrounds us with great abundance, but not with much that feels authentic or healthful. It leaves many people yearning to connect to nature and community but too busy to spend much time in either." A complicated relationship, to be sure.

Ideas spoke with her by phone from Hanover, N.H.

IDEAS: Can you unpack the term "fresh" for us a bit?

FREIDBERG: As a word, it's kind of like the refrigerator itself in that it contains many things we hope are good{hellip} better taste, health, less handling, more connection to the earth somehow.

IDEAS: But sometimes it's just the opposite, yes?

FREIDBERG: A lot of work and labor and sometimes technology go into making food seem natural.

IDEAS: When did we start relying on refrigeration?

FREIDBERG: We were using ice from the 19th century. The electric refrigerator for the home took in the 1920s. Refrigeration was used on an industrial scale for urban cold storage and transport before it was a domestic technology. Partly there were practical considerations. There were large distances in the US as opposed to European countries; there were extremes of weather. But also, refrigerated freshness appealed to the American sensibility of better living through technology: keeping up, keeping modern, but not losing touch with what's natural and authentic. The modern notion of freshness captures that paradoxical American ideal.

IDEAS: And it's patriotic, to boot.

FREIDBERG: Yes, in World War I certain foods had to be sent to the front, meat and wheat. We were taught that civilians should eat everything that was too perishable to ship to the front, and make sure it didn't go to waste{hellip}For the icebox industry, it was a good deal.

IDEAS: Why did you decide to write this book?

FREIDBERG: The idea came to me when I was finishing researching my last book ["French Beans and Food Scares"] and doing some research on the early days of long-distance perishable food trading between Africa and Europe. One of the main controversies was the technology that made it possible: refrigeration. One of the things that bothered people was the notion that when things were refrigerated, it was impossible for consumers to tell if they were really fresh. Today we assume if something is in the refrigerator, it must be fresh. That's where we go to look for freshness. It felt like one of these ideas I couldn't not write a book about it.

IDEAS: Reading this book, I kept thinking about the use of the slang word "fresh" in the '80s to mean something was really great. It seems like such a random word to adopt - though I guess no more random than "wicked."

FREIDBERG: I talked about this book with someone who formerly worked in advertising who said that in the ad industry, it's kind of the word. It's the Holy Grail. It doesn't matter what you're selling - it has to seem fresh.

IDEAS: Our obsession with eating the freshest food can seem like magical thinking, as if we can ingest the food's life essence.

FREIDBERG: It's no coincidence that they're called "vitamins." The discovery of vitamins in the 19-teens really corresponded to concerns that the industrial food supply stripped us of vitality. We were working in office jobs separated from nature. This notion that there were these micronutrients particularly concentrated in perishable foods appealed to this concern at the time, and it still does: If these foods contain vitamins, they're going to make us feel more alive somehow. This was very explicit in the marketing of fresh food.

IDEAS: When we look at the fruit displays at the front of the supermarket, they look like art, pretty and colorful and carefully arranged. But what are we actually looking at?

FREIDBERG: We're looking at generations of breeding to make fruit look beautiful. We might be looking at a lot of wax, and a lot of times pesticide applications. The funny thing is, even the organic produce is very pretty. A couple of years ago, organics looked flawed. Now organic producers are expected to hold to the ideal of beautiful food. A lot goes to waste because of that ideal.

IDEAS: And sometimes taste. I'm thinking of those great heirloom apples that are brown and mottled.

FREIDBERG: A lot of varieties that are less beautiful don't make the cut. They're delicious tasting, but they're considered commercially unviable. Some varieties that took over supermarket shelves in the mid- to late-20th century, like Red Delicious apples, they're so tasteless consumers started turning away from them altogether.

IDEAS: Why are we so taken with local food? You compare locavores with utopians.

FREIDBERG: It's not a perfect fit. The locavores of today are saying we have to renounce something. We have to give up freshness at certain times of the year. I've been lectured by locavores about the evils of eating salad in the wintertime. But it's utopian in this notion that we can go back to a time when we knew all the producers of our food and lived in these supposedly harmonious communities. That's what utopians tried to do, but trying to live in closed communities, they found they didn't always get along. Locavores tend to romanticize the notion of local communities, as if they're egalitarian and made up of like-minded people. Even the people in my condo complex aren't.

IDEAS: Hell is other people.

FREIDBERG: Sartre was not a locavore.

IDEAS: Is it ever greener to buy packaged foods than fresh?

FREIDBERG: Yes, depending on how "greener" is defined. But measuring the overall footprint of specific foods is extraordinarily complicated and contentious.

IDEAS: What surprised you most in researching this book?

FREIDBERG: There's the whole trend in the seafood industry toward superfreezing. I hadn't been aware till I was talking to these salmon fishermen in the Pacific Northwest that frozen was now considered the new fresh. In some markets, fishermen have been very good at convincing restaurants and diners that fish that has been frozen on board at very low temperatures will actually arrive tasting fresher than fish that's "fresh" and put on ice and shipped from, say, the North Sea. But eggs were definitely the biggest surprise. A., I didn't realize they lasted so long. B., I didn't realize they were so seasonal. People of my mother's generation did not realize that either. The vast majority are laid in springtime.

IDEAS: Did writing the book change your notions of food or what you eat?

FREIDBERG: Not radically. Doing all that research on chickens, because I spent so much time reading about the life of the hen, I go out of my way now more than I did in the past to get the "humane" eggs. If anything, I became less concerned about absolute freshness. I guess I became less anxious.

Devra First reports on food for the Globe. E-mail dfirst@globe.com. 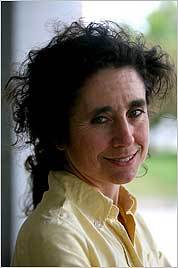 (Cheryl Senter for The Boston Globe) Above, Susanne Freidberg.
Your comment is subject to the rules of our Posting Policy
This comment may appear on your public profile. Public Profile FAQ