The past, and reshaped present, of New England's iconic stone walls 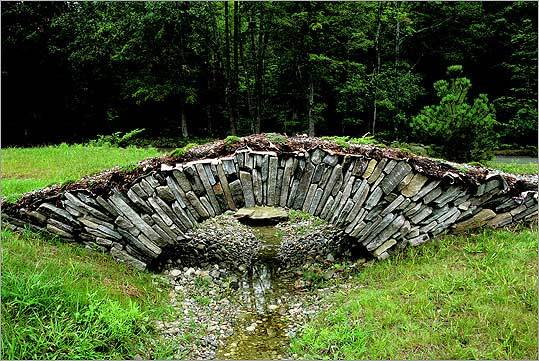 The author's creations include a bridge built with flat stones. (Photo by Peter Mauss)
By Dan Snow November 16, 2008
Text size – +

WHEN VEGETATION RETURNED to the land that is now New England after the retreat of the last Ice Age, it slowly created new soil over the glacial till and bare bedrock. For 12,000 years, forest litter decomposed and mulched itself into humus. Season after season the soil incrementally built until it was a lofty 4 feet deep, even on the slopes of Vermont's Green Mountains. When European homesteaders cleared the virgin forests and began cultivating, the topsoil was light and free of stones. It wasn't until erosion cut into the opened ground, and livestock compacted the soil, that stones began to appear.

Winter frosts drove deeper into the exposed landscape and lifted loose stones to the surface. Every spring the farmer's plow turned up more and more stones. They were tossed onto stone boats and dragged behind ox or horse to the edge of the fields. There, the first crop of the year was turned into a dry stone fence.

Stone fences were an important tool of order for early American farmers. They were the warp and weft of the cultural fabric. Rules for height, location, and maintenance of fences were strict. The laws of the day were truly written in stone. A town's "fence viewer" held a powerful position in the community. Even now the office sometimes survives as an unpaid, symbolic appointment.

Today, the stone fences of rural New England have lost their purpose but not their impact. They still draw our attention as we pass them by. We think of them as endless and immutable. In fact, they have changed. Over time, many have disappeared. And some are being reshaped into other things entirely.

By 1900, 5-foot-high, livestock-proof, dry stone fences had shrunk and become 3-foot-high stone walls. Over many seasons of exposure to the elements their bases had spread apart and sunk into the ground, sod had built up around them, and the stones that had once defined their crisp top line had toppled and tumbled. The animals they were intended to confine also played a part in reducing their stature, with agile sheep attempting to scale the walls and laconic cattle using them to scratch their behinds.

Where farmland reverted back to forestland, the walls were further disturbed. Dead trees and harvested timber crashed down on them from above. Thick root growth heaved them from below. The stone walls were disassembled into stone piles. The collection of stones that were once 2-foot-wide, 5-foot-high fences became 2-foot-high, 5-foot-wide mounds. As the walls became piles, evidence of their original handmade structure all but disappeared.

A derelict old wall can be restored to its original profile, but even when the same stones are used, it can never be the same wall twice. Every builder will handle the stones differently, resulting in a unique creation every time.

I've been building with stone in the landscape for 33 years, a good while from a human perspective but barely a blink in geologic time. The craft, the abundance of loose stone, and the heightened awareness of place within the community have combined to encourage me to go beyond simply building stone walls to creating works of art in the landscape.

Whether I am rebuilding an old wall or fashioning a new work of my own design, the stones are only mine while I hold them. My handling stone affects me more than it does the stone. I may have the latest say in where they go, but I don't have the last word. They'll be just as ready to be picked up by the next person who comes along.

In less than three centuries, stones were raised up out of the earth and built into fences, the fences devolved into obsolete walls, and the walls spilled themselves back across the ground. Before many more centuries go by, the piles of stones will be thoroughly remixed into the earth's ecological stew. Unless, of course, we choose to take stones back up in our arms, and with them create anew.

Dan Snow is an artist and dry stone waller living in Vermont. He is also the author of "Listening to Stone," recently published by Artisan, from which this essay is adapted.