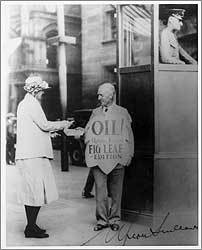 One of the hottest pictures at next week's Academy Awards, with eight nominations, is "There Will Be Blood," a sweeping tale of the rough-and-tumble early oilfields of California. Informed moviegoers will know that the film is adapted from the bestselling novel "Oil!" by Upton Sinclair. But they might be surprised to learn that it was the buttoned-up city of Boston that helped catapult Sinclair's book - inadvertently - to worldwide success.

When the novel was published in 1927, more than 20 years after Sinclair's landmark "The Jungle," it was immediately hailed as one of the author's best works. And almost as quickly, the book was banned in Boston, the victim of the city's famous self-appointed moral censors. Offended by the book's erotically charged love scene in, of all places, a roadside motel, they declared "Oil!" obscene and suppressed its sale in Boston.

Sinclair, the consummate showman, leaped into action. He had his publisher print 150 copies of a "fig leaf edition" of "Oil!," substituting a black leaf silhouette for the offending passages. Wearing a fig leaf sandwich board, Sinclair hawked the special edition on Boston Common, the city's traditional ground for protest. Hoping for a court trial on the obscenity issue, Sinclair had already received testimonials in the book's defense from authors and public figures such as Lewis Mumford, Norman Thomas, and D.H. Lawrence.

The officials ignored his grandstanding. But the photo of Sinclair selling a fig leaf copy of "Oil!" to a well-heeled Boston matron hit the front pages of newspapers everywhere, including Europe, and the book took off. Sinclair had another international bestseller, thanks to Boston.