THIS STORY HAS BEEN FORMATTED FOR EASY PRINTING
Robert David Sullivan 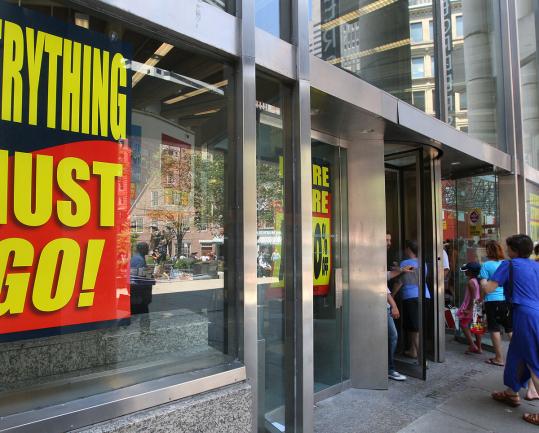 THE LIQUIDATION of Borders Books is the latest in a decade of bad news for retail in Boston’s Downtown Crossing. Still, there’s something new in the air along Washington Street. I think it’s cilantro.

will soon occupy the Old Corner Bookstore on Washington and School Streets - a few doors down from the Boloco burrito shop that Mayor Menino touted two years ago as a sign of Downtown Crossing’s revival. Between Chipotle and Boloco are a cupcake shop that replaced a souvenir store and a bistro at a former women’s clothing outlet. As retailers disappear, new restaurants and bars, from a cheapo Subway to trendy Petit Robert Bistro, are popping up all over downtown.

None of this is any comfort for store owners who have gone under. But it’s a sign of urban vitality all the same. Even as our economy shifts away from “Hoarders’’-style consumer-product consumption, we still like to get out and be with other people.

Shopping was never just a matter of buying things. In the 1970s, my mother would get dressed up, as if for a party, when she took the subway to the downtown department stores. (You never knew who you might see.) When I was a college student, bookstores and music stores were great places to meet up with friends and make new acquaintances. They still are, but they don’t pay for themselves. Food is now a better business model; after all, people don’t ask to taste ice cream flavors, then go home to order their scoops on the Internet.

As the economy slowly recovers, noshing is far ahead of shopping. Massachusetts gained 12,700 jobs in “food and accommodations” from June 2010 to June 2011; the 4.9 percent jump was higher than in any other employment sector. Meanwhile, job growth in the retail sector was a paltry 3,300.

This can’t just be explained by people being too lazy or busy to cook. Look at the long lines at an Anna’s Taqueria, and you’ll see enough sociability to rival . . . well, a church supper. Indeed, one big selling point for food trucks - the latest gastronomic craze - is that they encourage informal interaction. A study cosponsored by the city of Portland, Ore., found that patrons at mobile eateries were prone to striking up conversations with truck operators and each other. Boston, which has given the green light for food trucks to do business at 15 spots across the city, will likely see similar results.

The city has always been about the spaces where people can run into each other. So cocktail bars and food trucks will fill the gap left by Filene’s Basement and Tower Records. Instead of checking out the new record releases every week, we can now peruse the city’s increasingly inventive cocktail menus or see what’s new on the board at J.P. Licks.

This probably isn’t great for our waists or our productivity. Downtown office buildings will have to offer nap rooms for workers who can’t resist three-taco lunches. But psychologically, a new emphasis on eating rather than buying things may be a healthy trend. In a Cornell University study published last year, people reported more long-term satisfaction from experiences (such as vacations) than from cars, TVs, and other consumer goods.

Plus, Boston’s embrace of food trucks is an unexpected sign of progress in a city known for its resistance to public revelry. Alas, lifting the cap on liquor licenses in the Hub is a tougher sell (especially since the state has to approve), and the return of happy hours is probably an impossible dream. But the effort to site a large public market for farmers and other food vendors downtown is another good sign.

There’s nothing more thrillingly urban than coming across something new to eat or drink, then sharing it with friends. I’ll miss Borders, just as I miss Filene’s and Woolworth’s and all the other ghosts of Downtown Crossing, but the corner burrito shop is just as healthy for Boston’s civic life. Now if only it could stay open all 24 hours. . .

Robert David Sullivan is a freelance writer living in Malden.