THIS STORY HAS BEEN FORMATTED FOR EASY PRINTING
Joshua Green 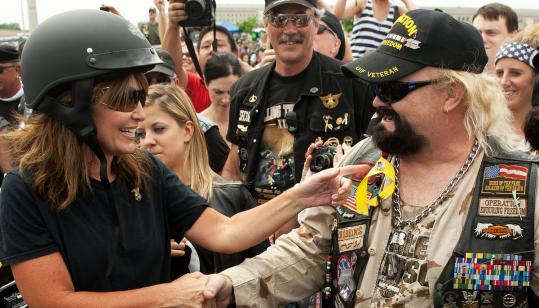 WASHINGTON
EVEN BEFORE donning biker leather and mounting a for a motorcycle rally in Washington last weekend, Sarah Palin had seized the political spotlight once again. A few days earlier, word had leaked of a gauzy biographical film soon to debut in Iowa. Then came news of a cross-country bus tour. Suddenly, the entire Republican presidential field was upended. Palin had gone rogue again, and the media were in a tizzy.

Most analysts agreed this was bad for the other candidates, save perhaps for Mitt Romney, who might benefit by the comparison. Tim Pawlenty had been drawing good reviews in his first week as a candidate until Palin upstaged him. Michele Bachmann, Herman Cain, Jon Huntsman, and the others would find it harder to get noticed with the media’s favorite distraction back in the picture. Even Romney, for all his money and familiarity, could wind up getting overshadowed. He’ll formally enter the race today in New Hampshire, which happens to be where Palin’s bus is headed. But what about Palin herself? Is crashing the race really her best shot to win the nomination, if that is indeed her goal? Most analysts ignore the question, content to marvel at her chutzpah. But if Palin wants to win, there’s a strong case to be made that she’s going about it all wrong — that she would be better off running a more traditional campaign.

Going rogue has one principal benefit: it draws attention. But she would never have lacked for that, and following the established course of a presumed front-runner would have given her a number of salutary benefits.

To begin with, she’d probably be leading in the polls. After the 2008 election, Palin was the GOP’s hottest commodity, a bona fide sensation who had captivated a party brought low by George W. Bush. Had she taken on the role of leader-in-waiting, she would have been difficult to challenge. Instead, she kept everyone guessing and let other candidates emerge, and, in Romney’s case, overtake her.

Palin’s greatest vulnerability is the impression that she’s erratic. A well-orchestrated campaign like the one that Karl Rove rolled out for Bush ahead of the 2000 primaries could have mollified some skeptics. Like Palin, Bush was regarded as callow and not quite up to the job. Those doubts mostly vanished after a carefully arranged regimen of policy conferences, thematic speeches, and personal appeals to major GOP donors. By contrast, Palin’s support among Republicans has declined steadily since the last election. As her bus zigzags between national landmarks, trailed by an army of reporters mystified about her plans and intentions, she seems more erratic than ever.

Palin’s stunt, while drawing attention to her, probably won’t draw many new supporters because it appeals to precisely those people who are already on her side, people who intensely dislike the White House and the media, who adore her spontaneous engagement with the people, and who care little about matters of qualification and temperament. To win, she’ll need more of that.

Although the press is loath to admit it, a disciplined campaign can drive a message and thereby shape how it is covered. More than a decade on, many Americans can still recall Bush’s theme of compassionate conservatism. Palin, too, has a message, although it has been lost amid the chaos and confusion she is stirring up. She’d like to focus on her record as governor of Alaska, where she took on the powerful oil and gas industry and helped clean up a corrupt legislature (a theme of the forthcoming movie).

A professional operation with strategists and surrogates and talking points could have amplified a compelling message. How many people know, for example, that Palin’s major accomplishment as governor, reforming the state’s oil-tax structure, is largely responsible for creating Alaska’s $12 billion budget surplus? Or that, at a time when the US credit rating could actually be cut, Moody’s recently raised Alaska’s rating to AAA, citing its fiscal health?

Before he decided not to run, Indiana governor Mitch Daniels had made fiscal probity the centerpiece of his incipient campaign and made himself a top-tier candidate. He did this despite the fact that social conservatives distrust him and Indiana faces a $270 million budget shortfall (and he still got to spend plenty of time on a Harley). Palin’s fiscal stewardship of Alaska should allow her to make a similar argument, one that would build on her popularity with social conservatives. Instead, what most people know about Palin’s governorship is that she abruptly quit it.

Despite this, she doesn’t look in such bad shape. A recent Gallup poll put her two points behind the front-runner, Romney. And she’s sure to get even more attention. But as Hillary Clinton and Howard Dean discovered, that only gets you so far. It takes an experienced, organized campaign to win the nomination. Soon, Palin will point her bus toward Iowa. Coverage will reach a fever pitch. She may imagine that she’s on her way to the White House. But it’s much likelier that she’s on the road to nowhere.

Joshua Green is senior editor of The Atlantic. His column appears regularly in the Globe.