THIS STORY HAS BEEN FORMATTED FOR EASY PRINTING
Mark Erlich

Why is the middle class demonized when Wall Street is the problem? 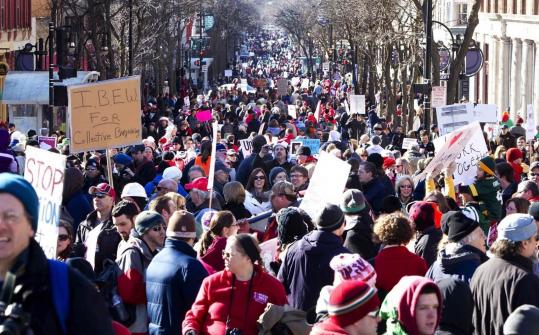 WE ARE in the third winter of the recession; 26 million Americans are out of work, cannot find full-time work, or have given up looking for work, and $11 trillion in household wealth has vanished.

As winter turns to spring, there is an evolving perspective on the crisis, shifting from an attempt to identify the causes to blaming the victims.

Congress is aggressively looking to eliminate regulatory excesses that are presumably hindering economic recovery only weeks after the Financial Crisis Inquiry Commission, appointed by Congress in 2009, issued a report concluding that the crash was caused by 30 years of deregulation, the stripping of key safeguards, and an overly optimistic reliance on self-regulation by large financial institutions. If the Republican approach were part of a homicide investigation, it would be as if the detectives had removed the smoking guns from the perpetrators’ hands and arrested the corpses.

Wisconsin is only the most dramatic site of a broader strategy of absolving Wall Street and scapegoating public employees and their unions. While there are legitimate and critical public policy issues about education reform, spiraling health costs, and pension liabilities at a time of state and municipal budget deficits, why is the fault laid at the feet of teachers, police, and firefighters? Today’s pension obligations are the product of massive investment losses, not excessively generous public pensions that, in fact, average about $19,000 a year. For that matter, a 2010 Economic Policy Institute study showed that, controlled for educational achievement, public sector workers actually earn less than their private sector counterparts.

With corporate profits at record levels, strong bank balance sheets, along with the return of large compensation packages in the financial sector, the commission’s reminder that the continuing devastation of the crisis was entirely avoidable is worth remembering. It was not the invisible hand of the free market but rather “the result of human action and inaction,’’ a reckless environment in which the five major investment banks had leverage ratios (assets protected by capital) as high as 40 to 1.

For a brief moment after the economy fell off the cliff, the excesses of financial manipulations put broader social and economic questions back on the table. Why, for example, does the United States rank 31st out of the world’s 33 most advanced economies in terms of income inequality, more unequal than Third World countries such as Guyana, Nicaragua, and Venezuela? Why, according to the Census Bureau, has inequality increased by 22 percent, and why have the wealthiest 5 percent expanded their share of total income by 32 percent since 1980? And why, during the same period, has average family income climbed less than 1 percent a year, especially when there are far more two-income earners in most families?

The emergence of an American middle class coincided with the growth of unions, and the rise in inequality has accompanied their decline. The myth of the American dream, of the United States as a meritocracy in which economic opportunity is universally available, has never been more in question. Children from upper income families are now 20 times more likely to have high incomes of their own than children from low income families. Classic rags-to-riches stories are limited to professional athletes, celebrities, and fortunate individuals who manage to beat the odds.

Why does the gulf in economic equality matter? Research has repeatedly shown that negative indicators for health, educational performance, economic mobility, and a broad array of social issues are correlated with income inequality. The more unequal a society, the less likely its citizens will have a stake in pulling in the same direction. A generation ago, non-union workers often welcomed news of improved wages and benefits for unionized employees, recognizing that a rising tide lifts all boats. But today’s waters are murkier. At a time of sacrifice and insecurity, many would prefer to sink their neighbor’s slightly bigger boat while wistfully hoping for a glance at a yacht in a gated marina.

The demonization of public employees is a calculated strategy to steer the political spotlight away from those who brought us the recession. If the focus is not shifted back to the root causes of the crisis, in the words of the commission, it will happen again.

Mark Erlich is executive secretary-treasurer of the New England Regional Council of Carpenters.