Debt default is no laughing matter 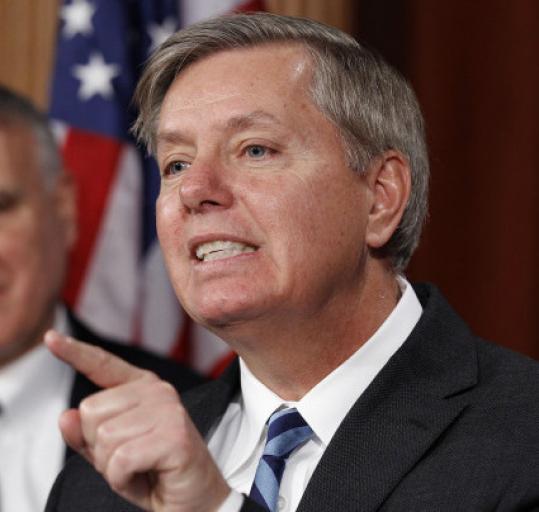 SOMETIMES LIFE imitates art — and sometimes life imitates silly art. So last week, when Senator Lindsey Graham said he’s prepared to let the United States default on its debts unless Social Security is fixed, it brought to mind a scene from the Mel Brooks classic, “Blazing Saddles.’’ In the scene in question, the new sheriff, played by Cleavon Little, takes himself hostage, demanding at gunpoint that the hostile townsfolk back down from their threats — or else!

Audiences got the joke, the absurdity of threatening to shoot yourself unless someone obeys your orders. With regard to the full faith and credit of the United States, however, the Chinese, to say nothing of the global financial markets, will not be so amused.

No one is happy about our $14 trillion national debt. Voter rebellion in November was driven largely by the perception of runaway spending and government expansion. But the debt-ceiling vote isn’t about what will be done in the future; it is about the integrity of America’s commitment to support the bonds we issue. Elected officials have an obligation to maintain that integrity, regardless of whether they voted for the programs that required the borrowing in the first place.

A default would trigger panic selling, skyrocketing interest rates, and damage to our credit markets that would make the crisis of 2008 look like a rounding error. Despite rhetoric about foreign ownership, the vast majority of Treasury bonds are held by American pensions, retirement plans, financial institutions, and local governments.

Thus, after everyone has had a chance to bluster, posture, and pontificate, we are left with one basic question: under any foreseeable circumstance, would it be in our national interest to default on our debt? The answer is unequivocally no. So where does that leave Senator Graham and his colleagues in the House and Senate?

Unfortunately for Congress, this is not — and never has been — a negotiation with the executive. President Obama, like all before him, will simply insist that Congress act responsibly and raise the ceiling. As senator, he voted against raising the limit once, and missed similar votes twice. The lesson? Being president is a much better job than being in Congress.

In fact, raising the debt ceiling probably ranks as the most unpleasant vote any member of Congress has to take. No one wants to explain support for “raising the national debt.’’ That is precisely why the House used the “Gephardt rule’’ for years to avoid voting altogether; the ceiling was raised automatically when the budget conference report was approved. That should never have been an option. The only rational course now is to get the job done quickly and transparently, while making the best of a difficult situation.

First, the floor debate should be used to explain why legislation to raise the limit is necessary. The debt ceiling is simply an artifact of our need to finance government operations. In order to avoid the legislative chaos of legally authorizing every bond issuance one at a time, Congress must establish broad authority for Treasury to issue bonds up to a certain limit.

An open, public debate provides a stark reminder that spending more than we collect from taxpayers each year has very real implications. The difference must always be borrowed. Over the long term, if we wish to avoid raising the limit, we can take more from taxpayers or spend less. Those are the only choices.

Second, congressional leadership can use the need to pass a bill as leverage to begin addressing the growing deficits. In defense of my friend Senator Graham, this is where he was heading; but a reform of Social Security in the next 90 days is simply not in the cards. More realistically, Congress could return unspent stimulus funds, set a firm cap on next year’s spending, or even adopt modest portions of the Bowles-Simpson deficit reduction plan.

Households and businesses cut expenses every day. Passing a financial down payment alongside the debt limit sends the right message to the public, and gives members of Congress greater comfort, or cover, depending on your perspective.

Finally, Congress needs to bite the bullet and raise the limit. In an ideal world, it would be a bipartisan effort. In the world of Congress, precedent has always been that the party controlling the chamber produces the votes. Maybe that’s why the leaders get paid more.

Most of the analysis leading up to this debate has focused on House Speaker John Boehner’s headaches, but Harry Reid may have bigger problems in the Senate. He has 23 caucus members up for re-election in 2012, Lindsey Graham playing the Cleavon Little role, and investors around the world waiting impatiently for him to do the right thing. But as sheriff, he can’t play for laughs or politics — he’s got to corral the votes needed to keep America’s economy from stampeding off a cliff.

John E. Sununu, a guest columnist, is a former US senator from New Hampshire.