The darkness of our wars

As celestial alignment calls to mind irrational beliefs, what could be scarier than reality? 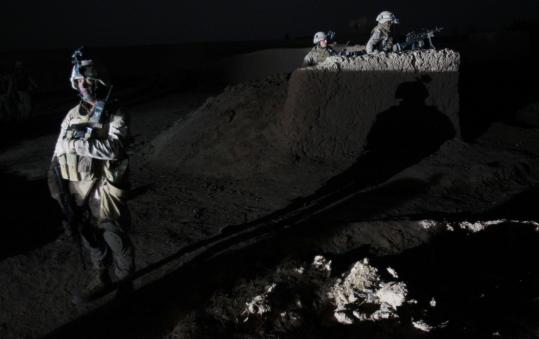 US Marines guard the entrance to a compound where they stopped for the night in Marjah in Afghanistan’s Helmand province in February. (Associated Press)
By James Carroll December 20, 2010

TONIGHT AND tomorrow mark the rare conjoining of a full moon, a total lunar eclipse, and the winter solstice. Hear the dogs howl! The shortest day; the deepest night; the Earth adjusting the tilt in its rotation; the sun seeming ready to return; the shadow of our planet falling upon the moon: all of it at once can set animals howling and strike the human heart with primitive anguish. Such heavenly alignments have long been taken as portents, prompting prehistoric sacrificial rituals designed to appease deities and ward off pestilence and war. But what if war is already the given fact of a people’s life? And what if long-suppressed irrational impulses still define human longing, even when science readily explains what causes full moons, eclipses, and the winter solstice?

Lunatic is a word we have from the Latin for moon. Last week, America’s Taliban enemy in Afghanistan seemed to manifest a lunatic mumbo-jumbo when a spokesman lumped the tragic heart failure of Richard Holbrooke in with an unrelated litany of other misfortunes that befell Taliban antagonists — from the similarly fatal heart troubles of Soviet leaders Yuri Andropov and Leonid Brehznev to General David Petraeus’s passing out while testifying before Congress and even the coming resignation of Defense Secretary Robert Gates.

In the words of New York Times reporter Alissa J. Rubin, the Taliban statement depicts Holbrooke’s death “as only the most recent example of the deadly spell that Afghanistan casts on outsiders who try to dominate the country.’’ It’s not just that Taliban fighters are wily and determined. No, there are apocalyptic forces at work, dooming America as they doom any who violate taboos, ignore warnings of the gods, or tread on forbidden sacred soil. From the moonscape of rugged mountains and desert plains stretching along the Eurasian tectonic plate, the solstice eclipse phenomenon must seem a portent, indeed.

But Washington, too, shows itself to be in the grip of the irrational. In last week’s White House review of US strategy in Afghanistan, President Obama claimed to be “on track’’ toward fulfilling the goals of the war. Yet the conflict will last years more, and its essential stakes for America are no more clear after this review than they were before. Pentagon leaders use the phrase “strategic patience’’ as if it were a magical mantra, designed to change blood into water. And speaking of ill-fated alignments, the Obama review came just one day after news surfaced of National Intelligence Estimates on Pakistan and Afghanistan that painted a very different picture. Representing a consensus of the entire US intelligence community, the NIEs warned that large parts of Afghanistan can yet fall to the Taliban, and that covert Pakistani support for the Taliban continues. The out-of-control corruption of America’s partner in Kabul makes the Taliban appear a lesser evil to Afghans.

The gloomy intelligence estimates point to one ever-more likely conclusion: US efforts, no matter how selfless or earnest, are going to be swamped. Pentagon leaders predictably denounced the assessments as outdated or the product of mere analysts, yet the CIA, a main author, is fully engaged in the war both on the ground and from drones. Strategic patience seems to require strategic denial.

Humans are only ever partly conscious of what motivates behavior and choice, and what can seem like a prudent program may actually run along buried currents of mindless superstition. War above all succumbs to this rule, for it requires the literal sacrifice of human lives, and ancient impulses remain very much in play. When young people die in service to their country, those deaths themselves can become justification for further deaths, a leaving behind of whatever war aims sparked the conflict in the first place. Who now knows why we are fighting in Afghanistan — except that we are fighting there? Grief for the fallen ones compounds itself. President Obama promises to end the war in some years, a constancy that could be admirable but for its removal from the actualities both of the Taliban enemy and the Kabul friend.

When the moon, Earth, and sun fall into a mystical pattern, one recalls the power of the primitive. Howl! We Americans kid ourselves to imagine that we are free of such dark impulses. We are the dogs of war.