A call for help in flood-ravaged Pakistan 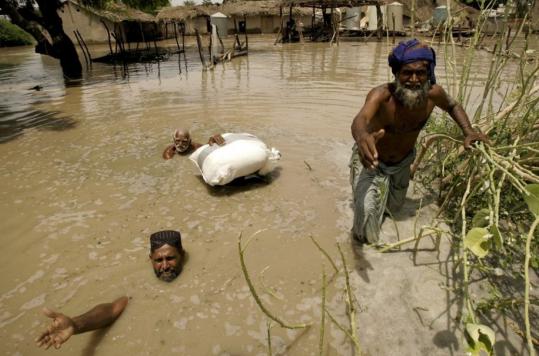 THIS IS Pakistan’s Katrina. I just returned from that country, where the devastation created by the recent floods was gut-wrenching. Five years after floods washed over the southern United States, Pakistan is suffering from an epic disaster. And we turn away from Pakistan in its hour of need at our own peril.

It’s not just that one-fifth of the country — an area about the size of New England — is submerged. Nor is it that, with weeks left in the monsoon season, it could get worse. More than 1,600 people have been killed, 6 million are homeless, and more than 17 million have been affected in some way.

Those chilling numbers don’t convey what I saw when our helicopter touched down in Multan on the Punjab plains. This is no isolated hamlet, but an ancient city, a district capital with a population of over 1.5 million. And it’s inundated with water.

As people told their stories, their desperation for food and drinking water was evident. I saw children orphaned by the floods. And I saw joy when American helicopters arrived with food, water and medicine. The scale of the disaster was clear from the air, where miles of agricultural plains looked like a massive lake. Any flat surface high enough to escape the waters became a life raft, packed with people willing to bake in the hot sun rather than face the flood waters.

So far, the world isn’t keeping up with the challenge. The United States government is doing its part by leading international donor efforts with $200 million so far, including money from the “Kerry-Lugar-Berman’’ aid package for Pakistan that Congress passed last year. Much more needs to be done by foreign governments and private citizens alike.

The danger of the floods extends beyond a very real humanitarian crisis. A stable and secure Pakistan, based on democracy and the rule of law, is in all of our interests. Pakistan has made enormous strides in combating extremism and terrorism — at great sacrifice by its soldiers, police, and citizens. But its ability to keep up the fight requires an effective response to this crisis.

To its credit, the Obama administration understands the need for a multi-faceted approach. For the past year and a half, it has pursued a policy that goes beyond traditional security issues. With the Kerry-Lugar-Berman aid package of $1.5 billion a year in civilian assistance as the cornerstone, the administration has sought to help the Pakistani people overcome the political, economic, and security challenges that threaten Pakistan’s stability and regional stability.

This is a long-term, people-to-people effort. The floods only raise the stakes. Already, there are concerns that extremist groups will provide aid to exploit the crisis and increase their influence over a vulnerable population.

We have to be strategic. First, we have to understand the limits of aid. US assistance alone won’t improve our image in the long run. While our standing improved in Pakistan after the 2005 Kashmir earthquake, the effects were temporary. A Pew poll taken before the floods showed only 17 percent of Pakistanis view us favorably, and 59 percent described the United States as an enemy. The good news is that 64 percent want better relations with us.

Second, we have to rethink how we communicate. Most Pakistanis receive their news from Urdu-language TV or, for the displaced, from cell phones. We need to target these media more effectively. We need a sophisticated communications strategy tailored to specific audiences — such as lower- to middle-class Punjabis, where the bulk of anti-American, anti-Indian, and pro-Taliban rhetoric is centered; young people, particularly on university campuses where radicalization takes place; and opinion makers in Lahore and Karachi who drive the news cycle, particularly in local languages like Urdu and Pashto. The message also matters; it must resonate with Pakistanis.

Finally, we have to be transparent about how we are spending money in Pakistan and tailor our assistance to what Pakistanis want. They need to feel tangible benefits from US aid and see that we are spending our money to help them. Some remain suspicious of US efforts to channel money through the Pakistani government, which they view as corrupt or inadequate.

We have an opportunity with the Kerry-Lugar-Berman aid package to improve our long-term standing and make a real difference — if we communicate effectively and spend efficiently. If we fail to reverse the tide of public opinion, no amount of aid will succeed.

Pakistan’s Katrina has put enormous pressure on the Pakistan government. It will take years and billions of dollars to recover. By helping Pakistan do it right, we can have a positive and lasting impact.

John Kerry is the chairman of the US Senate Foreign Relations Committee.