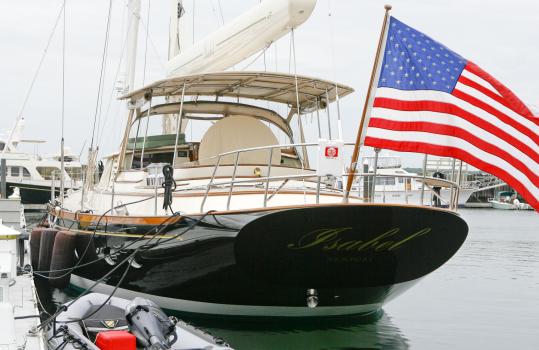 NO ONE IS ever likely to mistake me for the president of the John F. Kerry Fan Club. I rued Kerry’s election to the Senate in 1984, I have voted faithfully for his opponents ever since, and when he ran for president in 2004 I was impolite enough to describe him as a “tedious blister.’’

But I didn’t join in the big horselaugh that everyone had at Kerry’s expense after learning that he had avoided nearly half a million dollars in Massachusetts sales and excise taxes by keeping his new yacht tied up in Rhode Island. And I’m not gloating over his decision yesterday to put a stop to the media feeding frenzy by voluntarily sending the Department of Revenue a check for $500,000, “whether owed or not.’’

As the Boston Herald first reported, Kerry’s $7 million yacht “Isabel’’ boasts “an Edwardian-style, glossy varnished teak interior, two VIP main cabins, and a pilothouse fitted with a wet bar and cold wine storage.’’ Had it been berthed in Nantucket, where Kerry and his wife have a home, the senior senator from Massachusetts would clearly have had to pay the Commonwealth’s 6.25 percent sales tax. By mooring the yacht in Rhode Island, which abolished its sales tax on boats 17 years ago, Kerry appeared to have saved himself a huge amount of money.

That was perfectly OK with me. Kerry may be a tedious blister, but even tedious blisters are entitled to hold down their taxes. Vice President Joe Biden calls it “patriotic’’ to pay higher taxes, but a far more sensible view was expressed by Learned Hand, one of the most admired and influential federal judges in American history.

“Anyone may so arrange his affairs that his taxes shall be as low as possible,’’ Hand wrote in a 1934 opinion. “He is not bound to choose that pattern which best pays the treasury. There is not even a patriotic duty to increase one’s taxes.’’ In a 1947 case, Hand amplified the point. “There is nothing sinister in so arranging one’s affairs as to keep taxes as low as possible. Everybody does so, rich or poor; and all do right, for nobody owes any public duty to pay more than the law demands: taxes are enforced exactions, not voluntary contributions. To demand more in the name of morals is mere cant.’’

Granted, Kerry has never been averse to mere cant; his Senate career could be fairly described as an endlessly flowing river of the stuff. And Lord knows it is a temptation to cry “Hypocrite!’’ at a senator who is always ready to disparage tax cuts, yet deftly manages to cut his own.

But the temptation should have been resisted. What was the point of browbeating Kerry into paying higher taxes? Or rubbing his nose in his own history of laments about “tax-cuts-for-the-rich’’ and how “abusing offshore tax loopholes is wrong’’? It would have been far better to seize the moment to make Kerry see that by arranging to enjoy his yacht without paying the Bay State’s onerous taxes, he was acting not badly or selfishly, but rationally. Maybe Kerry could finally have absorbed the fundamental economic reality that human beings respond to incentives — and when taxes are too high, taxpayers and their money have an incentive to go elsewhere. Even fabulously rich taxpayers like Kerry and his wife.

Enticing as it can be to think otherwise, reality isn’t optional. Tax something less, and you get more of it; tax something more and you get less of it. People will always find ways to minimize their tax bill, and it is absurd to expect anything else.

This isn’t just about yachts and boatyards. If Congress allows the Bush-era tax cuts to expire at the end of 2010, tens of millions of Americans will change their economic behavior to avoid giving up more of their income to the government. Some will respond by working fewer hours, others by not expanding their business, or by looking for ways to shelter their income, or by moving to someplace where taxes aren’t so high. Few of us are zillionaires with teak-paneled yachts, but most of us become less productive when productive work is taxed more steeply.

No one should be taking pride or pleasure in having railroaded Kerry into forking over $500,000 he likely never owed. I’m no fan of the senator, but he showed good sense in seeking to keep his taxes low. If only he would do the same for the rest of us.