As the world’s ice melts, the Navy’s role grows 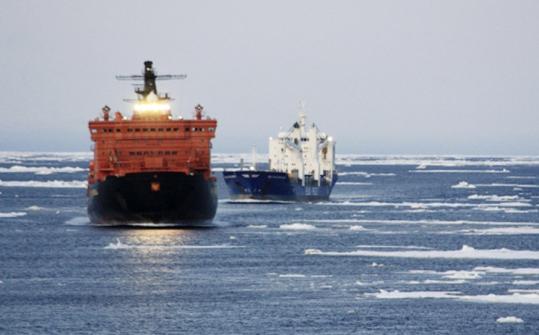 WHEN THE chief of naval operations of the United States starts rattling off global fishing statistics without notes and frets about climate change like an MIT scientist, we should all stand at attention. If Admiral Gary Roughead had his way, it would be full speed ahead toward a military strategy that considers not just nukes and nutty dictators, but also oceanic food resources and melting Arctic ice.

“All I know is that there’s a lot more water out there,’’ Roughead said in a meeting last week with the Globe editorial board.

Roughead joked that lots of water is great for a Navy guy, but he otherwise was quite serious. He noted how the growth of China’s navy runs parallel to the explosive growth of that nation’s fishing operations, similar to how the British and Dutch royal navies of centuries past grew to protect their seafaring mercantile trade. Roughead said China now accounts for nearly a quarter of the world’s fishing. According to a 2009 United Nations report, China’s marine and inland fish captures reached 17 million tons, equaling the next three countries of Peru, the United States, and Indonesia combined.

Roughead also said the potential for conflict is growing, with fishing fleets of many nations now traveling around the world to plunder waters after depleting stocks close to home. The UN says 52 percent of the world’s fish stocks are already fully exploited and another 27 percent are overexploited or depleted. But in a world where marine and inland capture was worth $91 billion in 2006, the exploiting will still go on without global cooperation, and many developing countries are already angry that more developed countries are conducting industrial-scale fishing off their shores.

Parallel to that, Roughead said that the melting Arctic creates all kinds of issues as more water is freed up for fishing, shipping and mineral exploration. The United States, Canada, Russia, Norway and Denmark (via Greenland) have made new claims for territory, prompting Chinese naval Rear Admiral Yin Zhuo to say four months ago, according to the China News Service, “The Arctic belongs to all the people around the world as no nation has sovereignty over it . . . China must play an indispensable role in Arctic exploration as we have one-fifth of the world’s population.’’

For Roughead, that means that the United States needs to become an indispensable player in the global marine legal arena. The first step, he said, is for Congress to finally approve the UN Law of the Sea Convention. The convention has 160 signatories, but not the United States. It creates a global structure for using the oceans. The Obama administration and the preceding Bush administration, as well as other military leaders, support the treaty. But hard-line conservatives and some business interests have blocked passage in the Senate, saying the United States would cede too much to the UN in territorial sovereignty and resource rights.

Roughead said these burgeoning sea issues mandate that the United States sign the treaty “so we have a seat at the table. The Arctic makes it imperative.’’ In congressional testimony in March, he said, “Not being a party to this Convention constrains efforts to develop enduring maritime partnerships, inhibits efforts to expand the Proliferation Security Initiative (the United States-led effort to stop trafficking of weapons of mass destruction, including sea smuggling), and elevates the level of risk for our sailors as they undertake operations to preserve navigation rights and freedoms.’’

Roughead argued that a more orderly ocean would actually allow the United States to “expand its sovereign rights to the increasingly accessible outer continental shelf areas of the resource-rich environment of the Arctic.’’

When the Navy’s head of operations talks about the continental shelf as well as how much fish is being caught by whom and can see melting ice having a direct impact on geopolitical relations, that is all the more reason we need to understand that our vast waters have their environmental and political limits. We need to understand those limits before water becomes a source of war.