A nation under post-traumatic stress 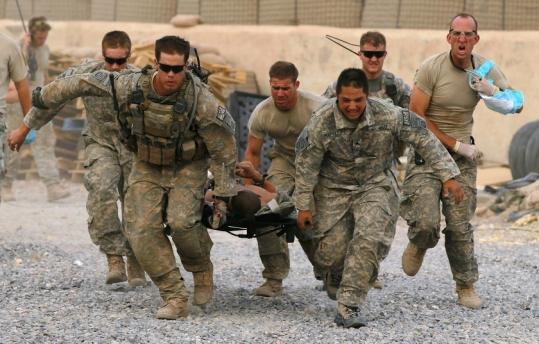 IT BELONGS to every citizen to have in mind what the nation’s present wars are doing — not only to US troops, Iraqis and Afghans, and the faceless enemy, but to the American character. We have come to understand that the brutalities of combat can shatter participants psychologically as well as physically.

A psycho-medical diagnosis — post-traumatic stress syndrome — has gained legitimacy for individuals, but what about whole societies? Can war’s dire and lingering effects on war-waging nations be measured? Can the stories of war be told, that is, to include aftermath wounds to society that, while undiagnosed, are as related to civic responsibility for state violence as one veteran’s recurring nightmare is to a morally ambiguous firefight? The battle zones of Fallujah and Kandahar are far away, but how do their traumas stamp Philadelphia and Kansas City — this year and a decade from now?

The US Civil War did not end in 1865. Its unleashed spirit of total destruction went west, and over subsequent decades Blue and Gray veterans savaged the remnant native peoples. The Indian Wars built upon Antietam and Shiloh. World War I was only the beginning of industrialized nihilism, with the decadence of the 1920s and the global collapse of order during the 1930s Depression coming in train with the civilizational suicides of the Somme and Verdun. The extremities of World War II generated a pathological paranoia in the Soviet Union, and a debilitating American insecurity that spawned, on one side, cultural banality, and, on the other, a garrison state. After Vietnam, citizens of all stripes proved permanently unable to trust their government. That killed shared meaning. America’s wars left moral wreckage in their wakes. The chop continues.

In describing what he calls “PTSD and the ruins of character,’’ psychiatrist Jonathan Shay cites an official definition of the disorder as it affects individuals. The characteristics include “a hostile or mistrustful attitude toward the world; social withdrawal; feelings of emptiness or hopelessness; a chronic feeling of being ‘on the edge,’ as if constantly threatened; estrangement.’’ The catastrophic experience of war, to put it most simply, can completely change the personality.

But it is impossible to read that catalogue of symptoms belonging to traumatized persons and not recognize notes of the contemporary public scene in the United States. Political discourse — “hostility, mistrust’’ — suffers from the same ruins of character. A general “social withdrawal’’ into the solipsism of, say, Twitter is matched in the blogosphere by infinite self-expression for its own sake. “Hopelessness’’ attached to economic dislocation goes even deeper than worries about mid-life job loss or the vocation stymied at graduation. There is no “emptiness’’ to compare with the loss of a feel for the purposefulness of work.

Always, television is a mirror, with ads for drugs displaying how “on the edge’’ we are, whether the presenting issue is sexual performance, staying asleep at night, or awake in the afternoon. The way to sell beer is to show young men aroused only by six-packs. Boy meets girl. Boy loses girl. Boy could care less because he has his Coors. If that’s not “estrangement,’’ what is?

Not every manifestation of human finitude is a symptom. But we kid ourselves if we think we can be a people at war for a decade without suffering consequences precisely as a people. Mostly, prescriptions for American disorder cite public issues like health care, education, the environment, and the recession. Expressing disappointment in Barack Obama has become a universal therapy. In private, we might obsess about the retirement fund, the boss’s recent coolness, a child’s place in school, or the spouse’s depression. Troubles aplenty, and plenty mundane.

But looming over all unease is the shadow of American wars that are, at best, hard to justify, difficult to understand, and steadily going, by every measurement, from bad to worse. The generals buckle. The president mystifies. Troops come home in bags or wheelchairs. Individual PTSD is back. An ever-growing population of far-off strangers equates America with Satan. The killers among them are empowered. And how could our quietly traumatized nation not be screaming, even if, at this point, the nation is still only screaming inside?