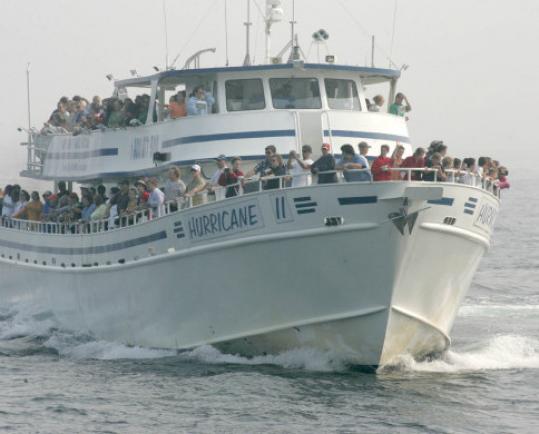 “You can have your whales, and benefit from them socially and economically, too’’ said Rashid Sumaila, a marine and fisheries researcher for the University of British Columbia. Sumaila is a co-author of a study this month in the journal Marine Policy that found that whale watching, already a $2.1 billion-a-year business that employs 13,000 people worldwide, has the potential to generate another 5,700 jobs and $400 million more in revenues.

The study makes a strong case “for sparing whales, which can be a source of significant benefits sustainable over time.’’ As the study noted, whale-watching fans certainly eclipse the relative handful of people who enjoy the taste of whale meat. In an interview, Sumaila added, “Some countries say we have to keep hunting whales for economic benefit. The data shows you don’t have to settle for economic crumbs.’’

Promoting whale-watching as international policy is not a joke, since nothing else works to protect the marine mammals. International Whaling Commission talks fell apart this week, with pro-whaling nations Japan, Norway, and Iceland continuing to harpoon the 1986 moratorium on commercial hunts. Japan says it does it for “research,’’ though everyone knows the research is a taste test at sushi restaurants. Iceland whaling magnate Kristjan Loftsson told Agence France Presse, “Whales are just another fish for me, an abundant marine resource, nothing else.’’ He claims that without the hunt, fin whales “would become a pest,’’ bullying other fish for food.

Some anti-whaling countries, including the United States, tried to offer whalers official blessing for their industry if they would accept sharp reductions and stop plundering pristine Antarctic waters, where 80 percent of all whales feed. The whalers, particularly Japan, which took 508 whales out of the Antarctic last year, rejected the compromise. This leaves the effectiveness of the IWC moratorium in doubt and whales in uncertain waters. Decades of protection have helped the humpback in the North Atlantic to rebound after the near-disastrous industrial whaling of the early 20th century. But other species remain rare or critically depleted, such as the blue whale and northern right whales.

Besides harpoons, whales also have to deal with climate change. The latest projections are not good. This week, the Zoological Society of London released a new assessment of the effect of climate change on food and breeding habitats for wildlife. Compiled for the United Nations’ Convention on Migratory Species, the report determined that whales comprise five of the nine sea or land mammals that are highly vulnerable to climate change. They are the North Pacific and Northern Atlantic right whales, the bowhead whale, the Southern right whale and the blue whale

The assessment said those species “will not respond to conservation measures in the long term if action is not taken to mitigate climate change.’’ Global warming means dramatic declines in zooplankton and krill, big changes in how the ocean circulates food, and more dramatic disruptions of food supply by more frequent and intense storms. The blue whale, down today to a few thousand from a preindustrial whaling stock of up to 200,000, is a krill eater. The turbulence of storms is already known to disrupt krill supplies. “It is likely that this will also negatively affect other baleen whales and the basking shark,’’ the report said.

So far, none of this has moved enough hearts and minds in Japan, Norway, or Iceland to stop their hunts. It all may come down to how much the rest of us can turn the “pests’’ into a magnificent public resource. “It is becoming increasingly obvious that animals such as whales have intrinsic value,’’ the whale-watching study said. With the failure of the IWC meeting, it falls to us to set the value, by proving that the sight of a living whale is worth more than one that is dead.