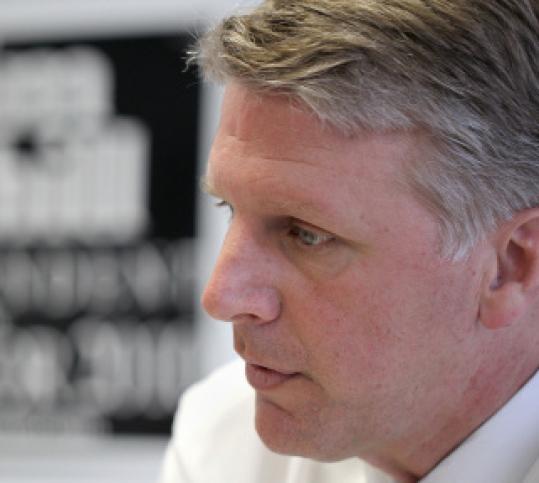 TREASURER TIM is nothing if not an entrepreneur and inventor.

Speaking yesterday to the Greater Boston Chamber of Commerce, that protean pol presented himself as a champion rushing to the rescue of the state’s business sector — all the while dodging the real world choices his own plans would entail.

Cahill proposed waiving the state income tax on a start-up’s founder, exempting its business expenditures from the sales tax and forgoing the unemployment tax on its first five employees, all for a period of three years.

But when chamber President Paul Guzzi asked Cahill what his tax relief package would cost the state, the treasurer slipped the surly bonds of substance.

There’s one small problem here: The state income tax rate was actually 5.3 percent in both years Cahill cited. What the stronger tax collections really reflects, of course, is an improved economy. In 2003, the US unemployment rate was 6 percent; in 2007, it was 4.6 percent. As things improved nationally, they did here as well.

Cahill’s new proposals come atop his call for rolling the sales and income tax rates back to five percent. That alone would cost $1.5 billion in yearly revenue. He also wants to reduce the capital gains tax and the corporate income tax.

But when I asked him if he planned to specify where he’d cut the budget to accommodate his tax breaks, Cahill was noncommittal.

When I noted that the fiscal situation was considerably different when Deval Patrick first ran four years ago, and that the budget now has a sizable structural gap, Cahill maintained that the state had long had such problems.

“We’ll deal with that as we go forward,’’ he said.

That sort of vagueness is par for the course for Cahill. As he positions himself as an alternative for those put off by Democratic incumbent Patrick but suspicious of Republican Charlie Baker, Cahill is obviously trying to finesse issues that might alienate potential supporters.

When I inquired recently about his positions on several reform matters, the written answers his campaign provided either embraced an anti-reform status quo or were nebulous enough to be almost meaningless.

For example, though Cahill said he favors “the eventual movement of all municipal employees’’ to the state’s Group Insurance Commission to help reduce local health-care costs, he stipulated that “the terms should not be dictated but negotiated through collective bargaining.’’ That’s basically what we do now — and it hasn’t worked.

On flaggers versus police details, Cahill said he backed any ideas that would bring real savings, but then asserted that using flaggers hasn’t done so. (The Patrick administration says it has saved $10.9 million over 18 months.) “Given the choice of a flagger vs. a member of public safety if costs are the same, I would choose the public safety official,’’ he concluded.

What about repealing the anti-privatization Pacheco law? “If legislation expanding the concept of the Pacheco law is forwarded to me by the legislature, I will not oppose it if [it] promotes competition and keeps unqualified vendors from receiving tax-funded contracts,’’ Cahill said. Translation: Never fear, you union voters looking for a home, if lawmakers won’t act, I won’t either.

As Cahill showed yesterday, he’s an affable guy with a pleasant Main Street manner. But his dodging of difficult realities reduces his political pitch to little more than campaign-year cotton candy.

Also on The Angle: Rubbing salt in the FDA's wounds