Banking on the unbanked 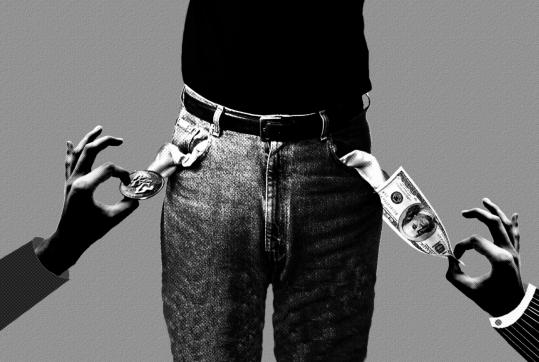 FORMER US Representative Joseph Kennedy once described the garishly-lit check cashing outlets that dotted Boston’s poorer neighborhoods in the mid-1990s as, “the worst predatory beast in the urban jungle.’’ Today, these check cashers look like a bunch of fuzzy alpacas compared to mainstream banks, credit card operators, and mortgage companies.

Take a glimpse into the maw of Boston Checkcashers at the corner of Massachusetts Avenue and Tremont Street in the South End. In the main cavity of this “beast,’’ people are waiting politely to pay utility bills, buy T passes, load phone cards, and cash payroll checks. An elderly woman who lives in Symphony Plaza is buying six money orders for 39 cents apiece. That same service would cost $3-$7 apiece at a reputable bank. A cab driver is wiring $100 via Western Union to his wife in Haiti. The fee is $9. It seems pretty expensive until a teller in a downtown branch quotes a $45 fee for the same service. And the money would take a lot longer to get there.

Financial experts refer to these customers as the “unbanked’’ - men and women who live from paycheck to paycheck or scrape by in cash economies. But don’t feel sorry for them. Feel sorry for the customers of commercial banks who will pay more than $38 billion in overdraft fees this year. They are penalized $25-$35 without warning for overdrawing their accounts, sometimes as many as three or four times a day. The Federal Reserve and Congress are finally starting to crack down on the problem. So look for banks to recoup their money through new monthly fees and financial gimmicks.

No one, however, seems to be pulling a fast one on the unbanked at the Boston Checkcashers on the corner of Blue Hill Avenue and Columbia Road in Dorchester, which stays open until midnight and has a gumball machine, to boot. Like other check cashers regulated by the Massachusetts Division of Banks, it is required to post its fees up front: 1 percent of face value for a payroll check; 4 percent for an insurance claim check; 10 percent for a personal check. The unbanked know the deal going in and understand they can only spend the money they have. Unwitting customers of traditional banks foolishly thought so, too.

People in lines at Boston Checkcashers cite distrust of banks as a main reason for using the service. They have a lot of company. Nationwide, there are about 13,000 check cashing sites serving 30 million customers each year, according to Financial Service Centers of America, the trade association for the check cashing industry.

No one is saying that check cashers are in the business of brotherhood. One trap they set for the unbanked across the country is the so-called payday loan. The borrower gets an unsecured, short-term loan at unconscionable rates exceeding 200 percent by writing a postdated personal check corresponding with the next pay day. In Massachusetts, however, regulators cap the interest on such loans at 23 percent.

Meanwhile, mainstream credit card companies still get to push rates to 30 percent or higher and pull back credit lines, even on borrowers with good credit scores. A recent study by the Pew Charitable Trusts found that the nation’s 12 largest banks, responsible for issuing more than 80 percent of credit cards, engage in practices that the Federal Reserve deemed “unfair or deceptive.’’

Bankers can point out that check cashers don’t put people on the path of homeownership. But check cashers could point their fingers at major financial institutions whose loose lending standards drove the nation’s subprime mortgage crisis. The country is buried in home foreclosures and economic uncertainty courtesy of major banks, mortgage companies, brokerage houses, and regulators - not check cashers. And the guy who cashes his payroll check for a small fee and buys a money order for pennies to pay his landlord is probably sleeping better than the nearly one in 10 Massachusetts mortgage holders who is now delinquent on their payments.

Check cashers know they always will be derided as bottom feeders. But bankers should consider that these late-night outlets with their pulsing pink and yellow signs probably engender more trust in some neighborhoods than many of the city’s buttoned-down financial institutions.

The beast turned out to be pretty tame, even accommodating. If you doubt it, just try walking into to pay your next gas bill.