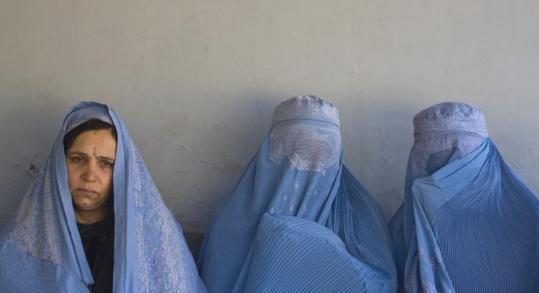 IT’S BEEN 11 years since I looked through a photo album smuggled out of Afghanistan by a brave young woman. “This is a doctor,’’ she said, pointing to one picture. “This is a teacher.’’ It was impossible to tell one woman from another under the burqas enforced by their Taliban rulers.

Back then, the world had turned a cataract eye on Afghan women. Under virtual house arrest, they were forbidden from work, from school, from walking alone or even laughing out loud. It was arguably the greatest human rights disaster for women in history.

After 9/11, when we went after Al Qaeda and the Taliban who had hosted these terrorists, many saw collateral virtue in the liberation of Afghan women. Indeed, President Bush played this moral card in his 2002 State of the Union speech when he declared to thunderous applause: “Today women are free, and are part of Afghanistan’s new government.’’ Mission accomplished.

Many women shed their burqas, opened schools, entered Parliament. Equal rights were written into the constitution. But slowly, as America turned to the disastrous misadventure in Iraq, Afghan women’s freedoms were casually traded in like chits for power.

Now again, we’re focusing on this beleaguered country and its sham leader. The discussion is cast in military terms - more troops, less troops. Yet I keep thinking about the women who are once again pushed to the outskirts of the conversation, as if they were an add-on rather than a central factor.

The options are so chilling that even Afghan women’s groups are divided. RAWA, the Revolutionary Association of the Women of Afghanistan, wants us out. WAW, the Women for Afghan Women, “deeply regrets having a position in favor of maintaining, even increasing troops’’ rather than “abandoning 15 million women and children to madmen.’’

American women seem equally torn - ambivalent is far too gentle a word. The Feminist Majority Foundation, which championed Afghan women long before it was popular, has stopped short of asking for more troops. Ellie Smeal’s anger at American funding of warlords is matched by the fear that if we back out, it will create “terrible human suffering,’’ the return of the prison state. Ann Jones, author of “Kabul in Winter,’’ confesses to agonizing about deserting Afghan women while fearing that Karzai’s henchmen and the Taliban are “brothers under the skin.’’ And Susannah Sirkin of Physicians for Human Rights says ruefully, “I don’t think if you ask women and girls that they would easily say their lives are better since 2001. The best you could say is that there is more cause for hope.’’

We shouldn’t be surprised we have come to this pass. It happened on our watch. We barely noticed when Karzai signed a law that would have, among other things, allowed Shi’ite men to withhold food from wives who refused sex. It didn’t take a rigged election to show a shallow respect for democracy. If by democracy, that is, you include half the population that is female.

I find this a bleak and demoralizing set of choices. The least unbearable may be to protect the population centers while rebuilding Afghan civil society, one city, one school, one health center at a time. But this works only if we include women in a debate that has been as militarized as war itself.

Afghan women are not the “add-on,’’ the incidentals in this process. Women are civil society. We’ve learned all over the world that the only way to develop a stable society and economy is with the education and inclusion of women. There is no democracy without women.

So, here we go. This is our last chance. And theirs.