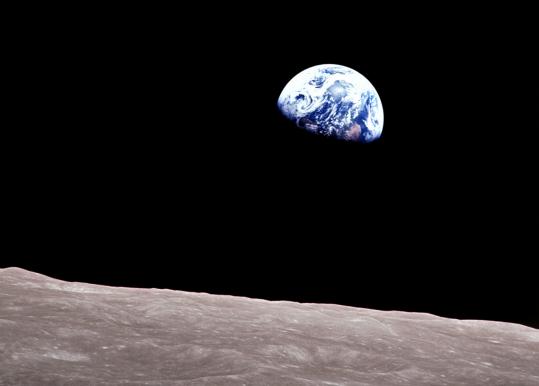 IT HAD BEEN a wretched and demoralizing year.

In April, Martin Luther King had been murdered in Memphis; in Los Angeles two months later, Bobby Kennedy was struck down. The fighting in Vietnam ground bloodily on, pushing the American death toll past 30,000 and fueling massive antiwar demonstrations at home. The United States was humiliated when North Korea captured the USS Pueblo and imprisoned its crew for 11 months. Racial tensions worsened, as segregationist George Wallace launched a third-party campaign for president. Outside the Democratic convention in Chicago, TV cameras broadcast appalling scenes of chaos and police brutality. "Seldom," Time magazine observed, "had the nation been confronted with such a congeries of doubts and discontents."

But in its final days, the annus horribilis of 1968 was unexpectedly redeemed by a dazzling display of intrepidity and ambition and nerve: Apollo 8's flight around the moon - the first human voyage to another world.

Afterward, the decision to send Apollo 8 to the moon would be called the greatest gamble in the history of the space program. The mission had originally been scheduled to test the new lunar landing vehicle while orbiting the Earth; the first moon-orbit mission wasn't planned until 1969. But the lunar lander wasn't ready. And the CIA was reporting that the Soviets were on the verge of upstaging the United States by sending a manned Soyuz spacecraft around the moon.

So NASA decided not to wait. Apollo 8 would go all the way to the moon. It was a gutsy, dangerous decision, and not just because flying without a lunar lander meant that Apollo 8's crew - Commander Frank Borman, James Lovell, and Bill Anders - would be stranded without a lifeboat if anything went wrong. Houston still didn't have the software Apollo would need to navigate to the moon. And the huge Saturn V rocket required to launch a spacecraft beyond the Earth's gravity was still being perfected, and had never been used on a manned flight. By today's standards, the risks were unthinkable. Apollo's program director, Chris Kraft, figured the odds of getting the crew home safely were no better than 50-50.

Yet in the end, it was a triumph. Apollo 8 lifted off on the morning of Dec. 21. The massive rocket, as tall as a 35-story building and burning 20 tons of fuel per second, performed flawlessly. Two years earlier, Pete Conrad and Dick Gordon had flown Gemini 11 to a record-breaking 850 miles above the Earth. Now Borman, Lovell, and Anders were on their way to beating that record by more than 230,000 miles.

They reached their target on Dec. 24, easing into orbit around the moon just 69 hours after leaving home. As an Earthbound audience of hundreds of millions tuned in, the astronauts of Apollo 8 - the first humans to view the lunar surface up close - described what they were seeing.

"The moon is essentially gray, no color," Lovell reported, according to a transcript. "Looks like plaster of Paris, or sort of a grayish deep sand." Borman described it as "vast, lonely, forbidding," a "great expanse of nothing that looks rather like clouds and clouds of pumice stone."

But it was only when they turned their camera away from the moon and back to the heavens that the full emotional impact of their achievement began to sink in.

"Oh, my God," Anders gasped. "Look at that picture over there!"

"What is it?" asked Borman.

"The Earth coming up. Wow, is that pretty."

Rising above the horizon, over a bleak lunar surface, was the world they had come from, a delicate marble of blue and white, floating alone in the darkness, home to everyone and everything they or anyone had ever known - "the most beautiful, heart-catching sight of my life," Borman later said, "one that sent a torrent of nostalgia, of sheer homesickness, surging through me." It was like a glimpse of Creation - like seeing the Earth as God might see it.

For their Christmas Eve broadcast from lunar orbit, NASA had instructed the astronauts simply: "Say something appropriate." And so, as half a billion people watched and listened 40 years ago this week, they did. Anders began:

Lovell took up the reading after Anders, and then Borman brought the broadcast to an end.

And God called the dry land Earth, and the gathering-together of the waters called He seas. And God saw that it was good.

"And from the crew of Apollo 8," Borman finished, "we close with, Good night, good luck, a Merry Christmas, and God bless all of you - all of you on the good Earth."