Harvard’s ‘step forward’ in Allston seems more like a tiptoe 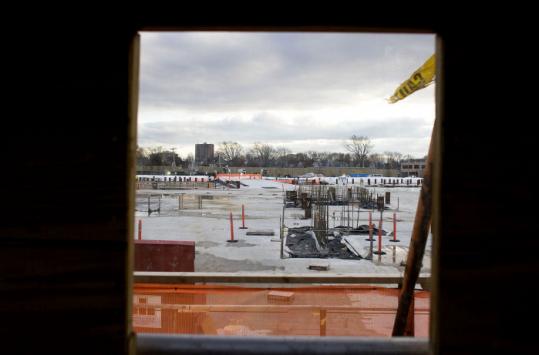 Harvard has reasserted its commitment to building a science center in Allston, where work on a planned complex had stalled. (Yoon S. Byun/Globe Staff/File 2009)
March 26, 2011

THE MARCH 24 editorial “Harvard wisely keeps its faith in science center in Allston’’ states that Harvard University has taken “an important step forward’’ regarding its stalled expansion into Allston. But Harvard President Drew Faust’s recent letter to the Allston community is, at best, an elusive step sideways.

Harvard has announced no timetable to resume construction at the 5-acre site on Western Avenue that it abandoned more than a year ago. Similarly, Harvard has offered no details about what will eventually get built there, other than Faust’s vague reassurance that it “will undoubtedly be tied to one or more science-based uses.’’

Boston residents still hope that Harvard will make good on its promise to create the “thousands, if not tens of thousands, of jobs’’ mentioned in your editorial. The university can keep repeating its hazy predictions for a brighter future, but until Faust provides specific plans and dates backed by the necessary financial resources, her letters just seem like more spin.