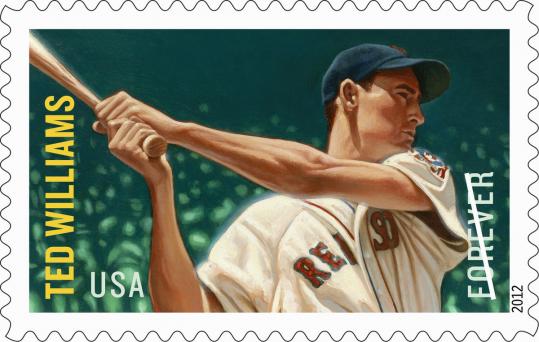 In his final at bat, Ted Williams hit his 521st home run, jogged around the bases and then disappeared into the dugout forever. Fans begged for a curtain call, but Williams famously never emerged. John Updike wrote of that day, “Gods do not answer letters.’’ But starting next year, gods can be used to mail letters, as the US Postal Service announced that the man known as Teddy Ballgame will be featured on a stamp.

This is a fitting tribute to Williams, not just because of his accomplishments on the field, but off the field as well. He missed five years of his career in World War II and the Korean War, serving as a Marine fighter pilot with dozens of combat missions.

But Ted Williams is not going on a stamp for his war heroism. He’s going on a stamp because he achieved his ambition “to have people say ‘There goes Ted Williams, the greatest hitter who ever lived.’ ’’ Many generations of Bostonians already know that, and the state has honored him by putting his name on the tunnel to the airport. But a stamp flies further.