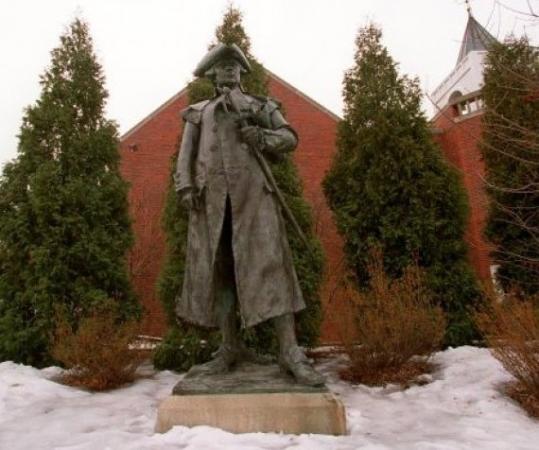 This statue of Joseph Warren has stood inside the courtyard entrance of Roxbury Latin School in West Roxbury since 1969. Some Roxbury residents want it returned to Warren Street. (The Boston Globe/File 2001)
February 21, 2011

A LETTER written by Joseph Warren, a dashing physician and Revolutionary War hero, has been returned to its rightful home in the Massachusetts Archives after six decades spent either in the hands of rare-document thieves or collectors. Now that the letter is secure, it’s time to resolve another outstanding Warren issue — the proper location of the statue of the Roxbury-born major general.

From 1904 to 1968, a bronze casting of Warren stood proudly on the street that bears his name in Roxbury. Several ethnic groups called Warren Street home over those years, most recently African-Americans. But the Warren statue stood as a symbol of courage and patriotism for all. Warren, who delivered two memorable orations on the Boston Massacre, was a master at rousing people to the side of freedom. A major figure in pre-revolutionary America, he might well have gone on to be president of the United States. But he died, at 34, while fighting for independence at the Battle of Bunker Hill in 1775.

The Warren statue was removed in 1968 by city officials to accommodate a road widening project. It was stored sloppily in Franklin Park, much to the chagrin of a physician at City Hospital who, like Warren, was an alumnus of Roxbury Latin, a storied prep school. A deal was struck with the city’s Parks Department to remove the statue temporarily to the West Roxbury campus of the private boys’ school, where it has been scrupulously maintained since 1969.

Some Roxbury residents see the removal of the statue as outright larceny. Others see the removal as a well-intentioned gesture gone haywire. In either case, city documents from the era make it clear that Boston’s Art Commission unanimously agreed to return the Warren statue to its Roxbury site after the completion of the road work.

Everyone, it seems, wants a piece of Warren. His two-page letter, which describes the American victory at Fort Ticonderoga, landed in private hands before its recovery in November. Meanwhile, the statue of a Revolutionary War hero that belongs on public display near his birthplace remains on the grounds of a private school. School officials have offered no comment on whether they would be willing to return the statue; they deserve credit for honoring Warren and taking good care of his replica. But it should be returned to its rightful place. This is no way to honor a Founding Father — even one who died before his prime, long before anyone thought there would be a Presidents’ Day.