There have been a week of protests, some peaceful and some violent, since the shooting death of Michael Brown, an unarmed black teenager by a white police officer in Ferguson, Mo. The unrest prompted Governor Jay Nixon to declare a state of emergency on Saturday an implement a curfew in the St. Louis suburb. Tensions had flared Friday after police released the name of the officer who fatally shot Brown and named the teen as a suspect in a convenience store robbery that occurred shortly before he was shot. --Lloyd Young (25 photos total) 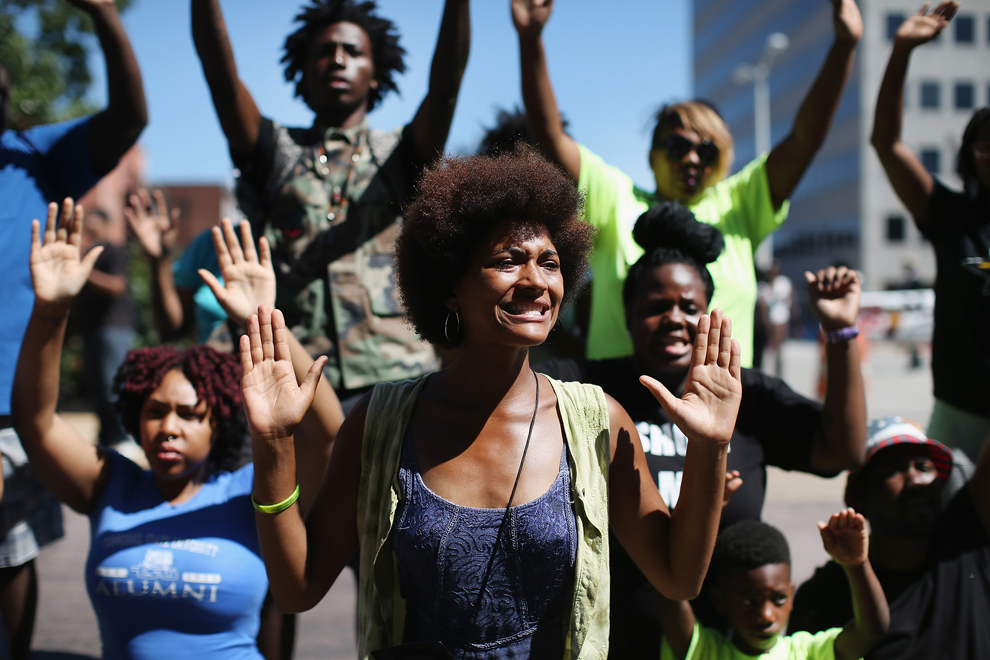 Demonstrators raise their hands and chant "hands up, don't shoot" during a protest over the killing of Michael Brown on Aug. 12 in Clayton, Mo. Some reports state that Brown hand his hands in the air when he was shot and killed by a police officer on Saturday in suburban Ferguson, Mo. Two days of unrest including rioting and looting have followed the shooting in Ferguson. Browns parents have publicly asked for order. (Scott Olson/Getty Images) 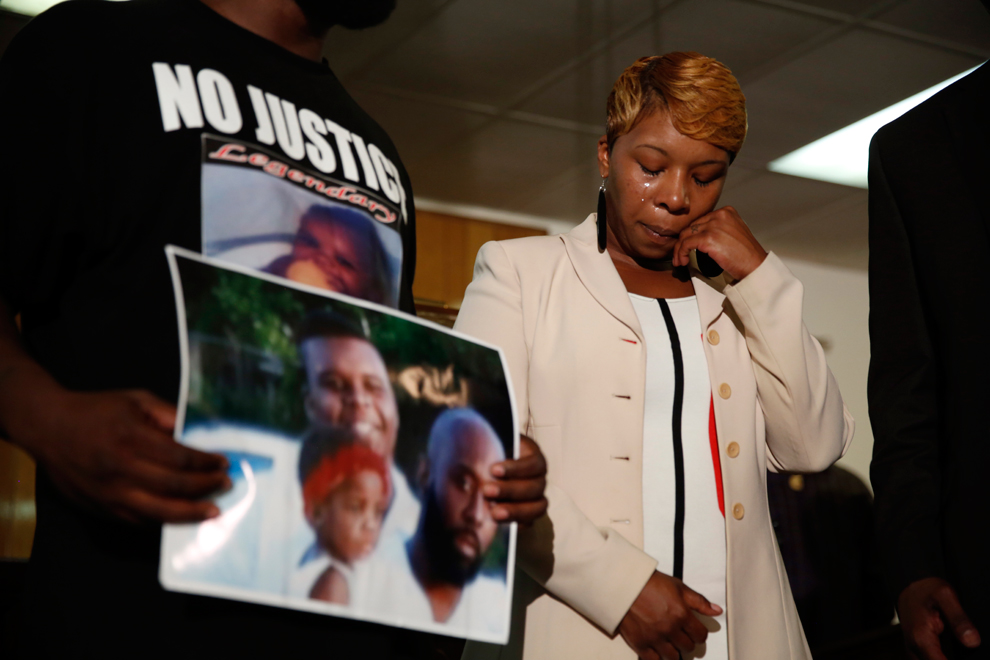 2
Lesley McSpadden, the mother of 18-year-old Michael Brown, wipes away tears as Brown's father, Michael Brown Sr., holds up a family picture of himself, his son, top left, and a young child during a news conference on Aug. 11 in Jennings, Mo. Michael Brown, 18, was shot and killed in a confrontation with police in the St. Louis suburb of Ferguson, Mo, on Aug 9.(Jeff Roberson/Associated Press) # 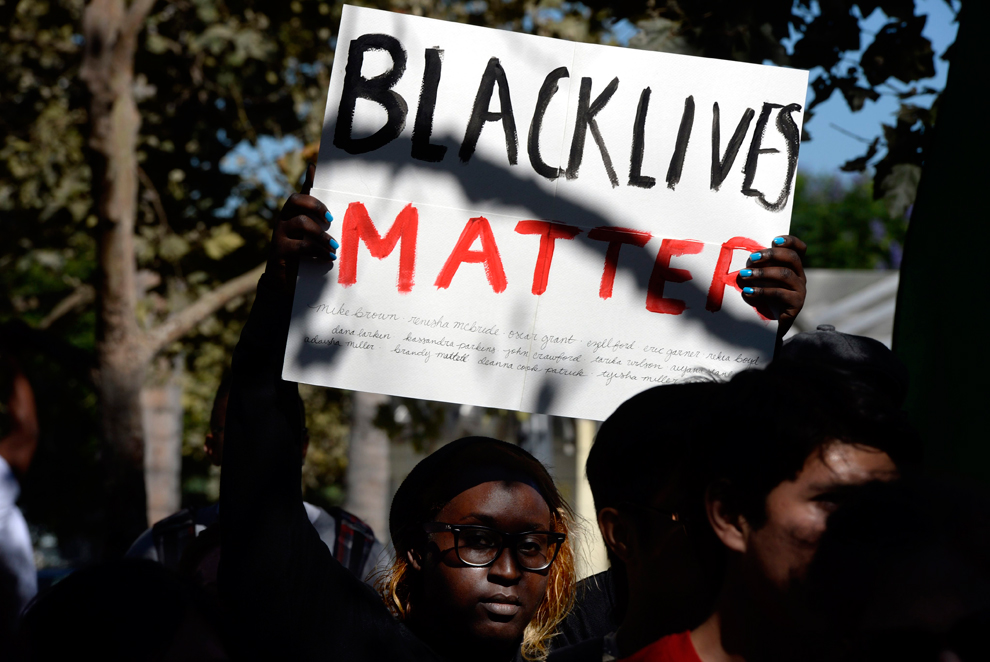 3
A protestor holds a sign that reads 'Black Lives Matter' as she joins hundreds of demonstrators who gathered in Leimert Park in South Central Los Angeles, Ca., on Aug. 14 to protest the police shooing of Mike Brown in Missouri. A nationwide Day of Rage was called to protest the police shooting and in support of demonstrators in Ferguson, Missouri where the shooting took place. (Michael Nelson/EPA) # 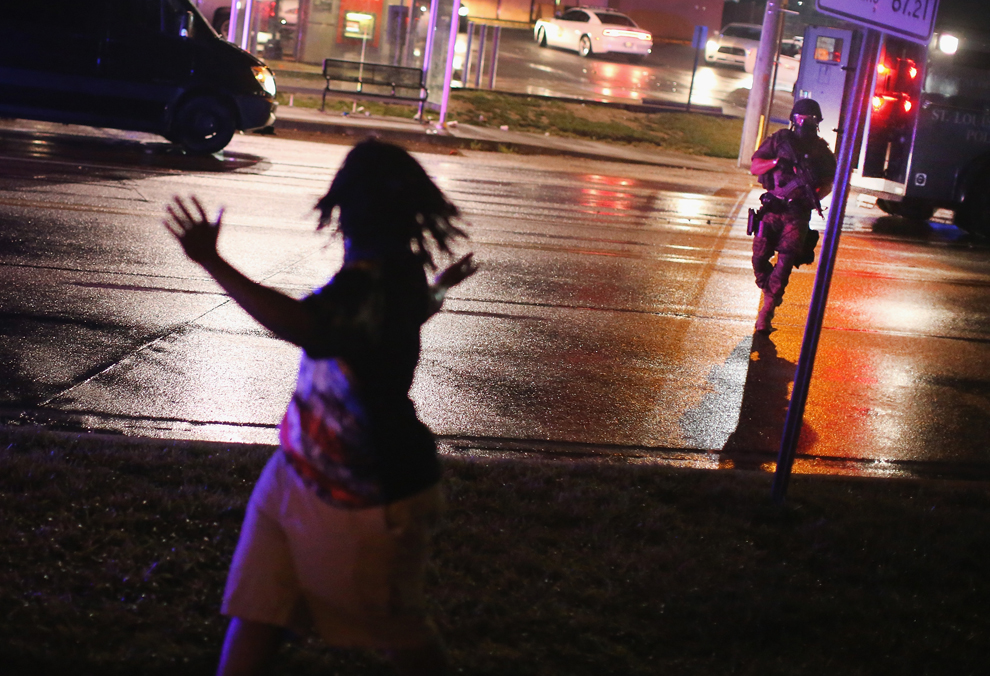 4
A Police officer confronts a demonstrators during a protest over the shooting death of Michael Brown on Aug. 15 in Ferguson, Mo. Police shot pepper spray, smoke, gas and flash grenades at protestors before retreating. Several businesses were looted as the county police sat nearby with armored personnel carriers (APC). Violent outbreaks have taken place in Ferguson since the shooting death of Brown by a Ferguson police officer on August 9. (Scott Olson/Getty Images) # 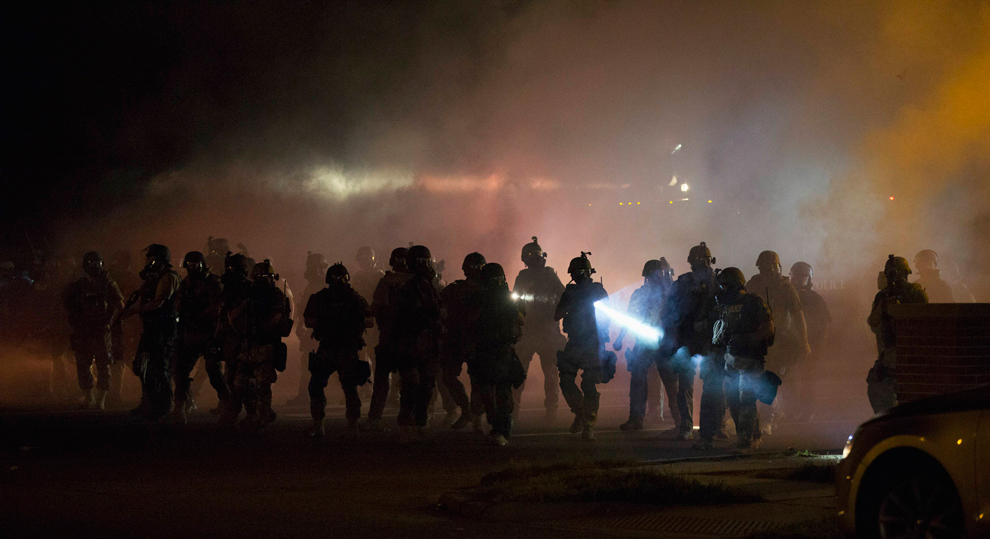 5
Riot police clear a street with smoke bombs while clashing with demonstrators in Ferguson, Mo., on Aug. 13. Police in Ferguson fired several rounds of tear gas to disperse protesters late on Wednesday, on the fourth night of demonstrations over the fatal shooting last weekend of an unarmed black teenager Michael Brown, 18, by a police officer on Saturday after what police said was a struggle with a gun in a police car. A witness in the case told local media that Brown had raised his arms to police to show that he was unarmed before being killed. (Mario Anzuoni/Reuters) # 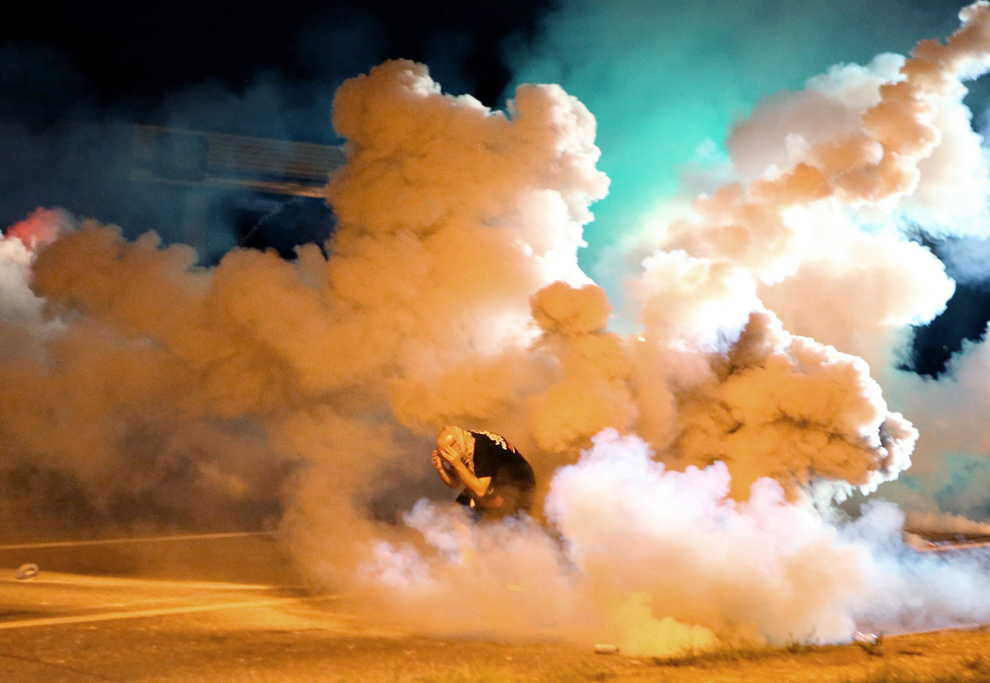 6
A protester takes shelter from smoke billowing around him on Aug. 13. Protests in the St. Louis suburb rocked by racial unrest since a white police officer shot an unarmed black teenager to death turned violent Wednesday night, with some people lobbing Molotov cocktails and other objects at police who responded with smoke bombs and tear gas to disperse the crowd. (David Carson/Louis Post-Dispatch via Associated Press) # 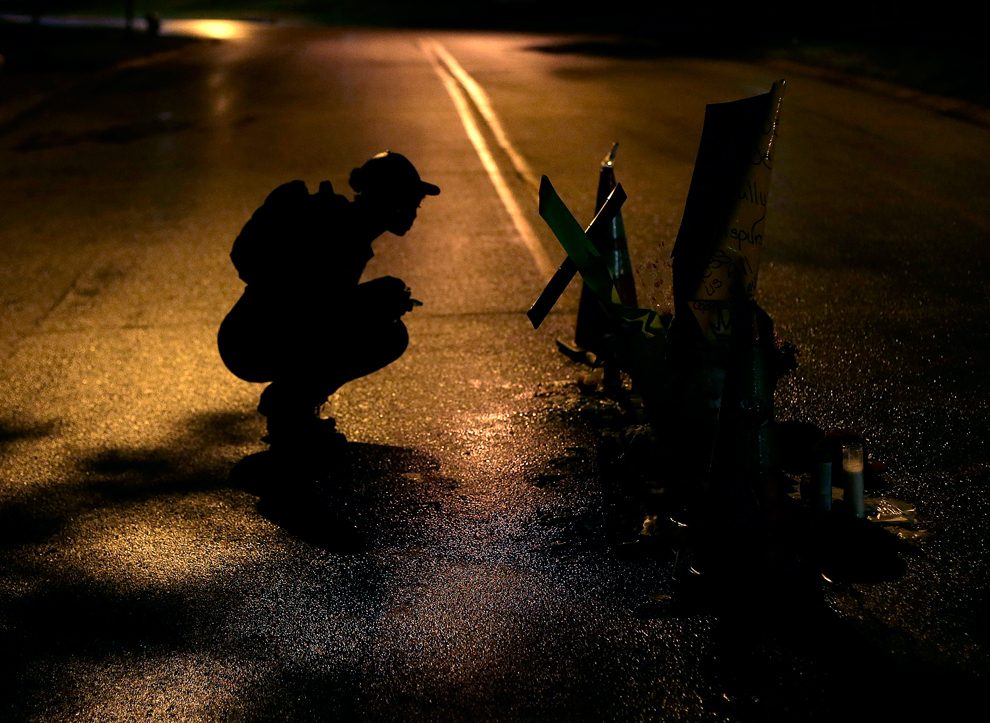 7
Ty Crustfield pauses on Aug. 15 before a makeshift memorial in the middle of the street where Michael Brown was killed by police nearly a week ago in Ferguson, Mo. (Charlie Riedel/Associated Press) # 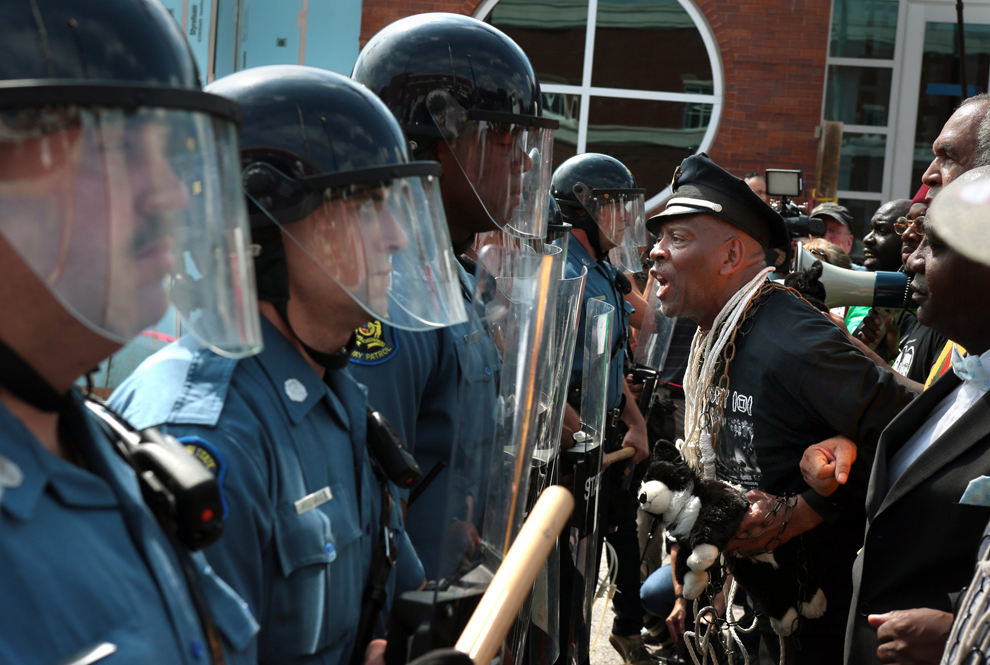 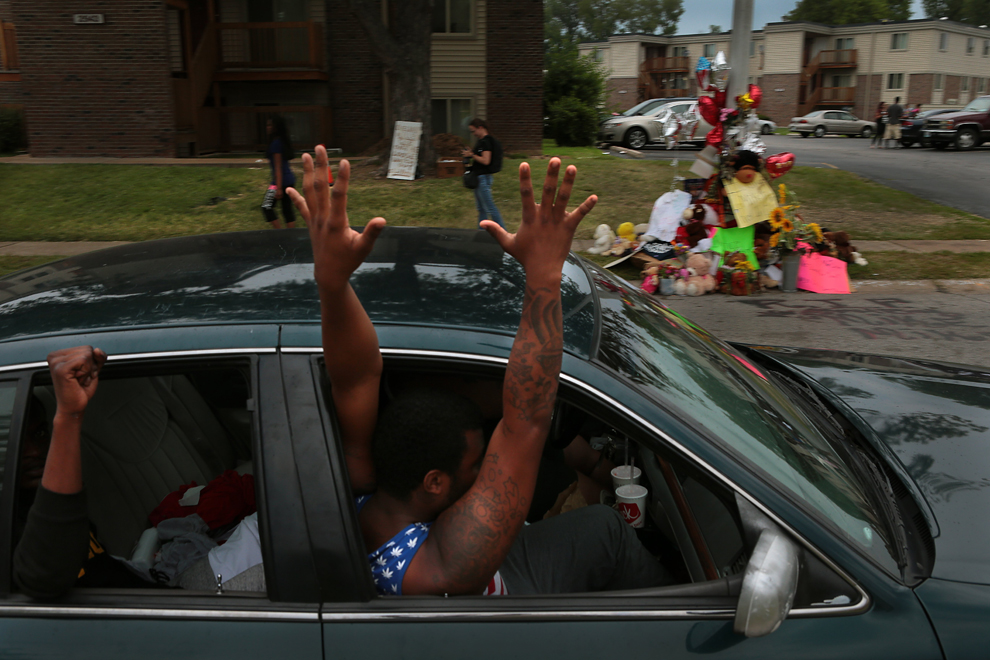 9
Passengers in a car raise their hands as they pass the memorial where Michael Brown was shot dead in the Canfield Green Apartments on Aug. 15. (Robert Cohen/St. Louis Post-Dispatch via Associated Press) # 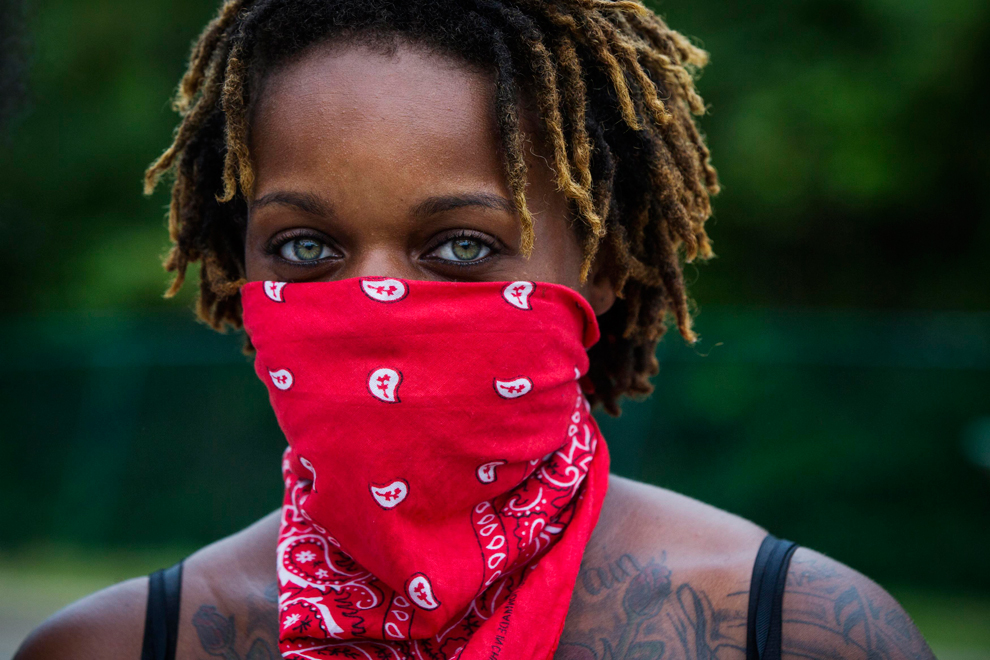 10
A woman looks into the camera during a demonstration to protest the shooting of Michael Brown and the resulting police response to protests in Ferguson, Mo., on August 15. Minutes before a police officer shot him dead, Brown, 18, had become a suspect in the theft of cigars from a store, according to police reports released on Friday after days of protests in a St. Louis suburb over the unarmed black teenager's death. A Brown family attorney said it appeared to be Brown in the convenience store's security-camera footage, which showed the teenager shoving a store clerk during an apparent robbery. (Lucas Jackson/Reuters) # 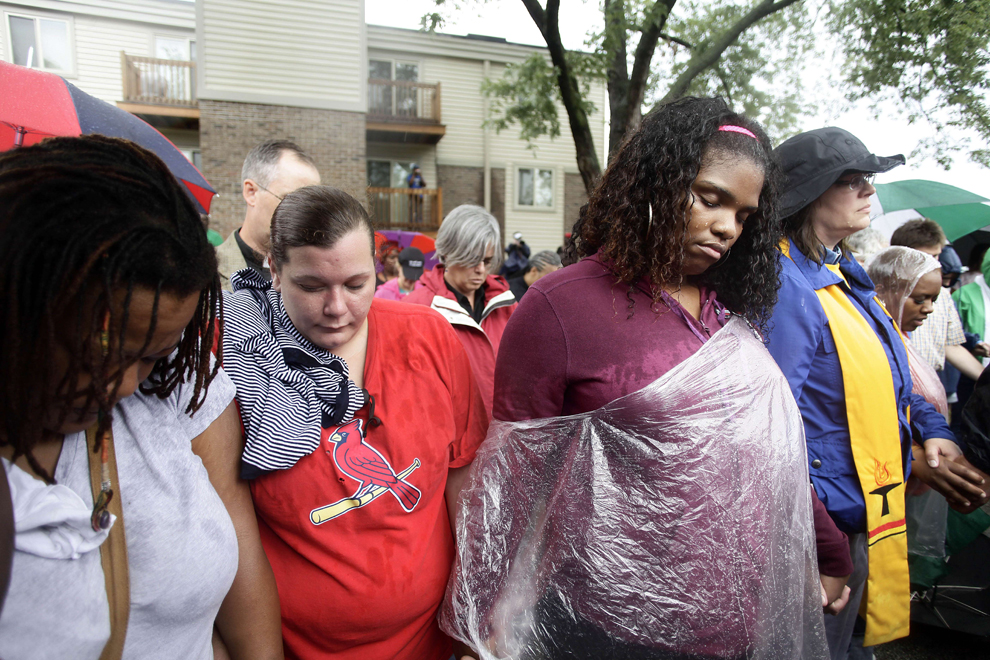 11
People pray on Aug. 16 at the site where Michael Brown was killed on Canfield Drive in Ferguson, Mo. Vandals attacked stores in Ferguson hours after police said the unarmed black teenager was a robbery suspect. The allegation reignited anger in the town, a St. Louis suburb in the state of Missouri, that has endured on-and-off rioting since Brown was killed on August 9. (Joshua Lott/AFP/Getty Images) # 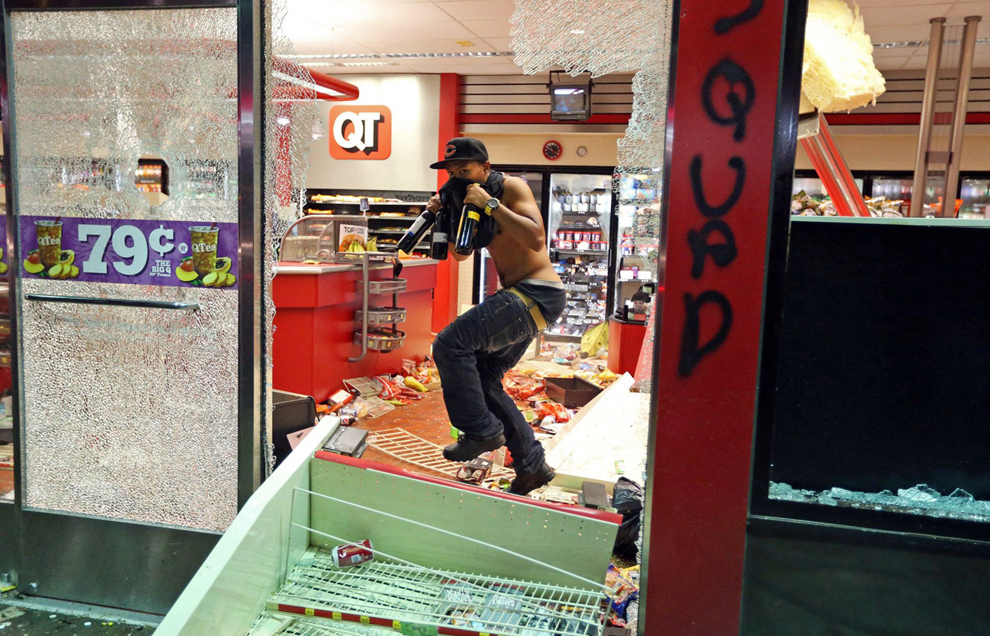 12
A man leaves a store on Aug. 10 in Ferguson, Mo. A few thousand people crammed a suburban St. Louis street Sunday night at a vigil for unarmed 18-year-old Michael Brown shot and killed by a police officer, while afterward several car windows were smashed and stores were looted as people carried away armloads of goods as witnessed by an an Associated Press reporter. (David Carson/St. Louis Post-Dispatch via Associated Press) # 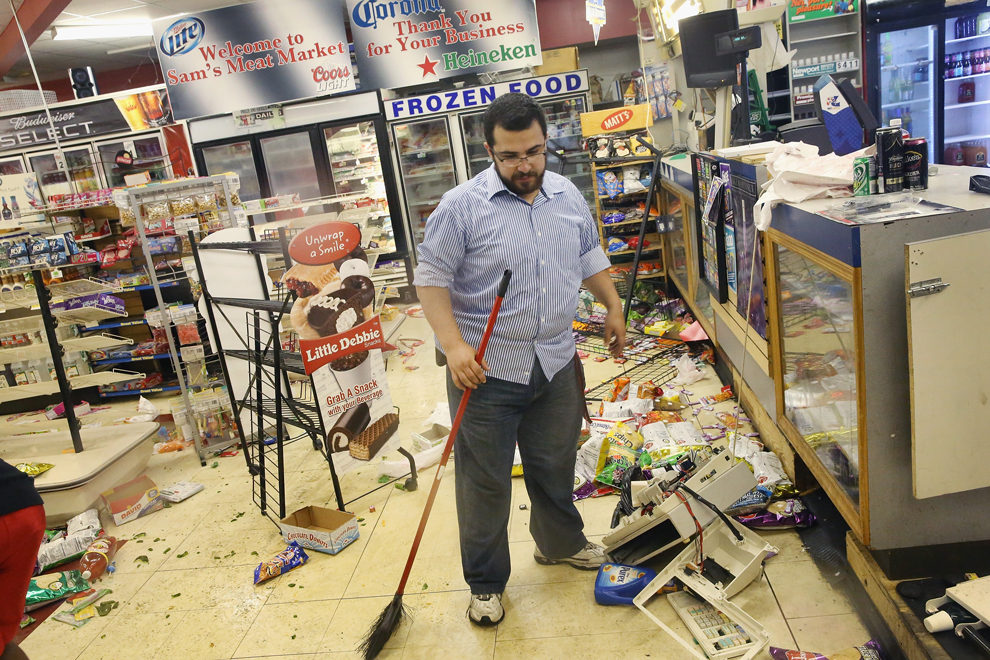 13
Business owner Mustafa Alshalabi cleans damage to his store, Sam's Meat Market, after it was looted during another night of rioting following protests over the shooting death of Michael Brown on Aug. 16. Alshalabi is carrying a firearm on his side in order to protect his property. Looters ransacked several businesses for several hours as police held a position nearby with military grade weapons and armored personnel carriers (APC). Violent outbreaks have taken place almost nightly in Ferguson since the shooting death of Brown by a Ferguson police officer on August 9. (Scott Olson/Getty Images) # 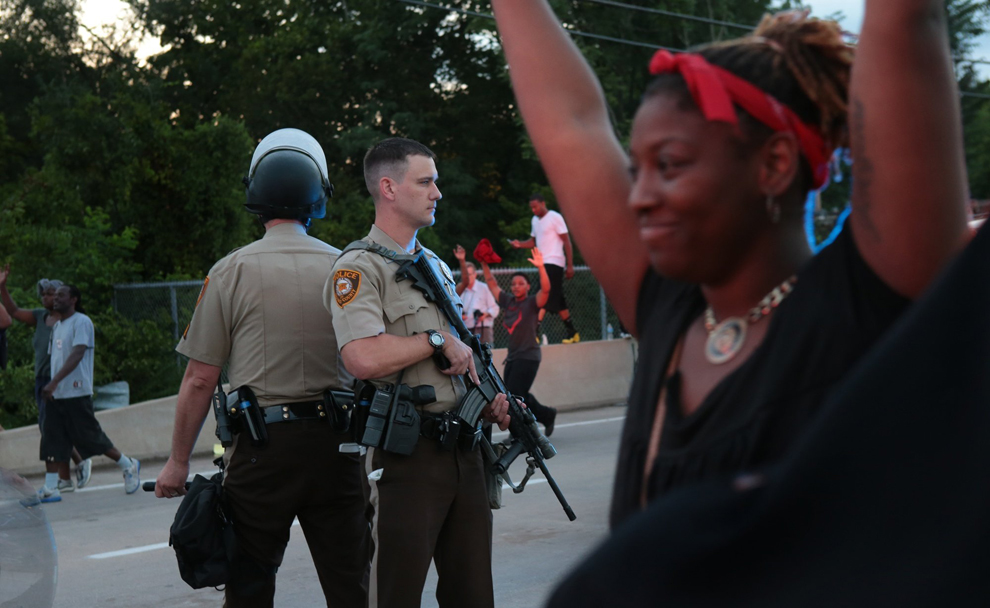 14
St. Louis County police officers stand back to back as they attempt to move a crowd gathered in front of the QuikTrip on Monday, Aug. 11. Authorities in Ferguson used tear gas and rubber bullets to try to disperse a large crowd Monday night that had gathered at the site of a burned-out convenience store damaged a night earlier, when many businesses in the area were looted. (Robert Cohen/St. Louis Post-Dispatch via Associated Press) # 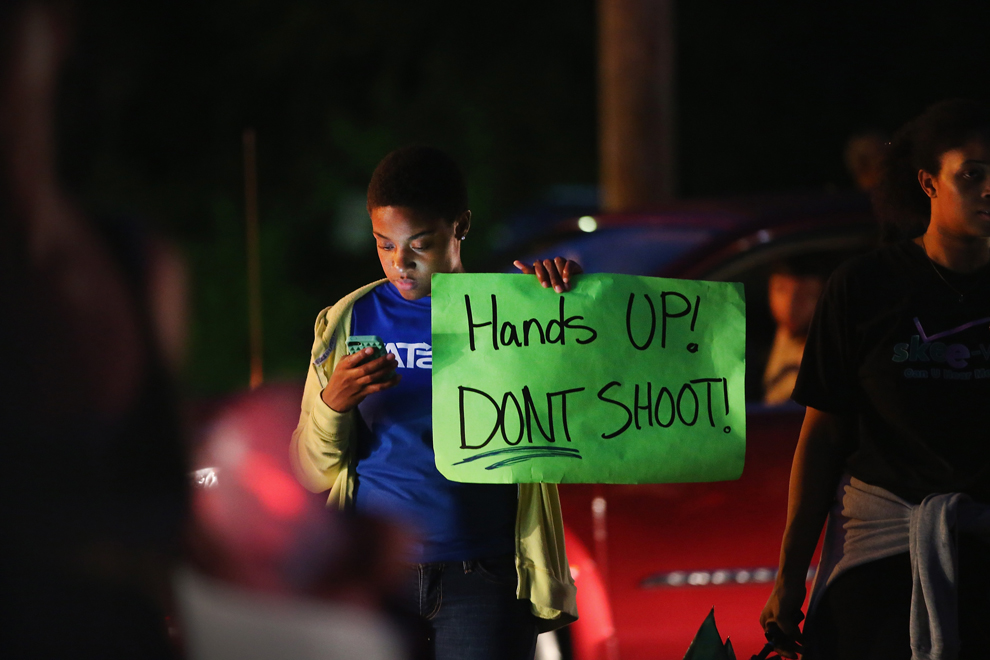 15
Demonstrators gather along West Florissant Avenue to protest the shooting and death of Michael Brown on Aug. 15 in Ferguson, Mo. Brown was shot and killed by a Ferguson police officer on August 9. Protestors raise their hands and chant "Hands up, don't shoot" as a rally cry to draw attention to reports that stated Brown's hands were raised when he was shot. Tonight demonstration again ended with protestors clashing with police followed by more looting. (Scott Olson/Getty Images) # 16
Protesters appeal to motorists for support while rallying on Aug. 11 in front of the QT gas station in Ferguson, Mo. that was looted and burned during rioting overnight that followed a candlelight vigil honoring 18-year-old Michael Brown, who was shot Aug. 9, by Ferguson police officers. Brown, who was killed in a confrontation with police in the St. Louis suburb, was shot Saturday and died following the confrontation with police. (Sid Hastings/Associated Press) #

17
A man backs away as law enforcement officials close in on him and eventually detain him during protests over the death of Michael Brown, an unarmed black teenager killed by a police officer, in Ferguson, Mo., on Aug. 11. The Federal Bureau of Investigation said on Monday that it had opened an inquiry into the weekend shooting of Brown. (Whitney Curtis/The New York Times) # 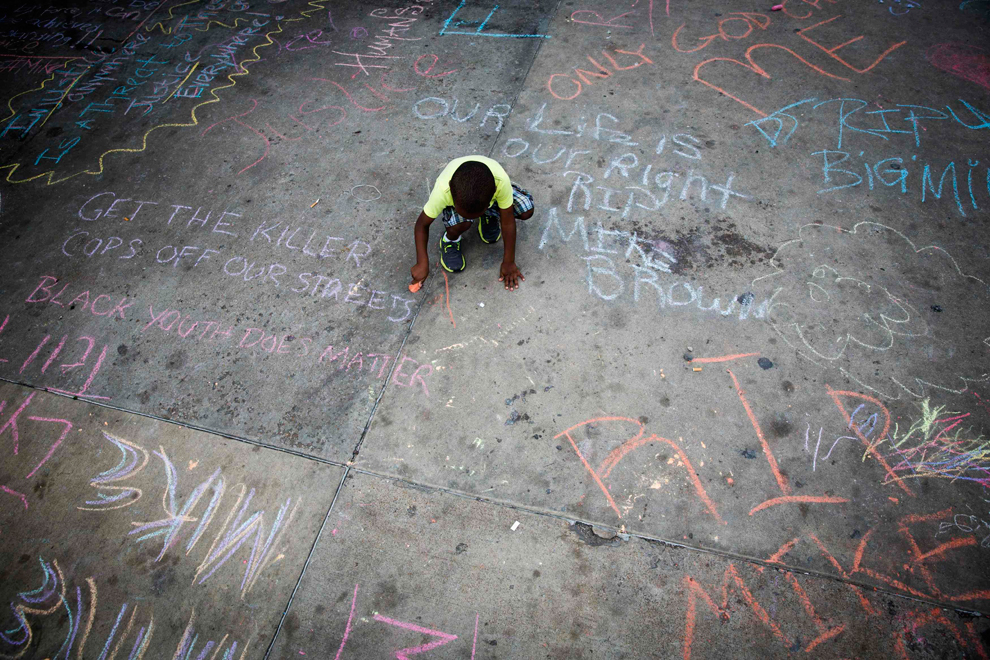 18
A young boy uses sidewalk chalk to draw on a parking lot filled with memorial slogans during a demonstration to protest the shooting of Michael Brown and the resulting police response to protests, in Ferguson, Mo., on Aug. 15. Minutes before a police officer shot him dead, Brown, 18, had become a suspect in the theft of cigars from a store, according to police reports released on Friday after days of protests in a St. Louis suburb over the unarmed black teenager's death. A Brown family attorney said it appeared to be Brown in the convenience store's security-camera footage, which showed the teenager shoving a store clerk during an apparent robbery. (Lucas Jackson/Reuters) # 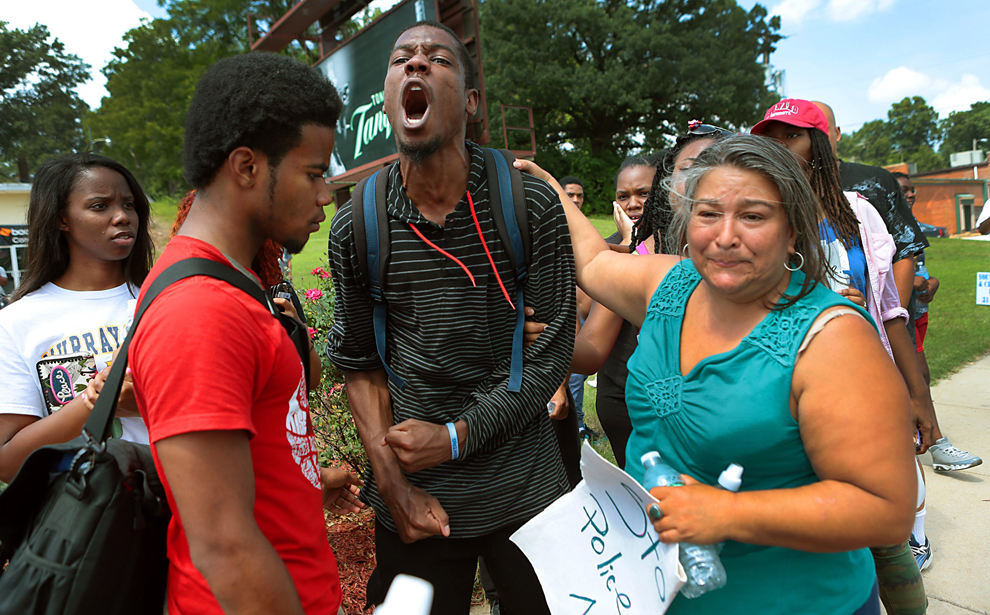 19
"All of my friends have been killed. I'm sick of it," yelled protestor Jamell Spann at police officers in riot gear that were clearing demonstrators from the area surrounding the Ferguson police station on S. Florissant Road in downtown Ferguson, Mo., on Aug. 11. Hundreds arrived to rally against the Saturday police shooting of Michael Brown. (Robert Cohen/St. Louis Post-Dispatch via Associated Press) # 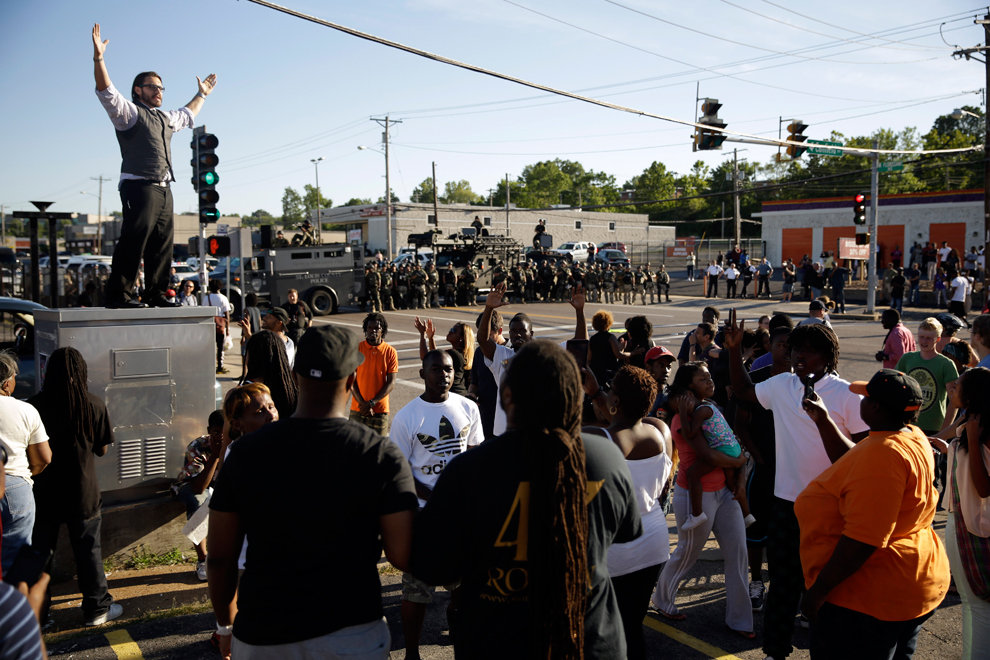 20
A man tries to calm a group of protesters as police stand in the distance in Ferguson, Mo., on Aug. 13. (Jeff Roberson/Associated Press) # 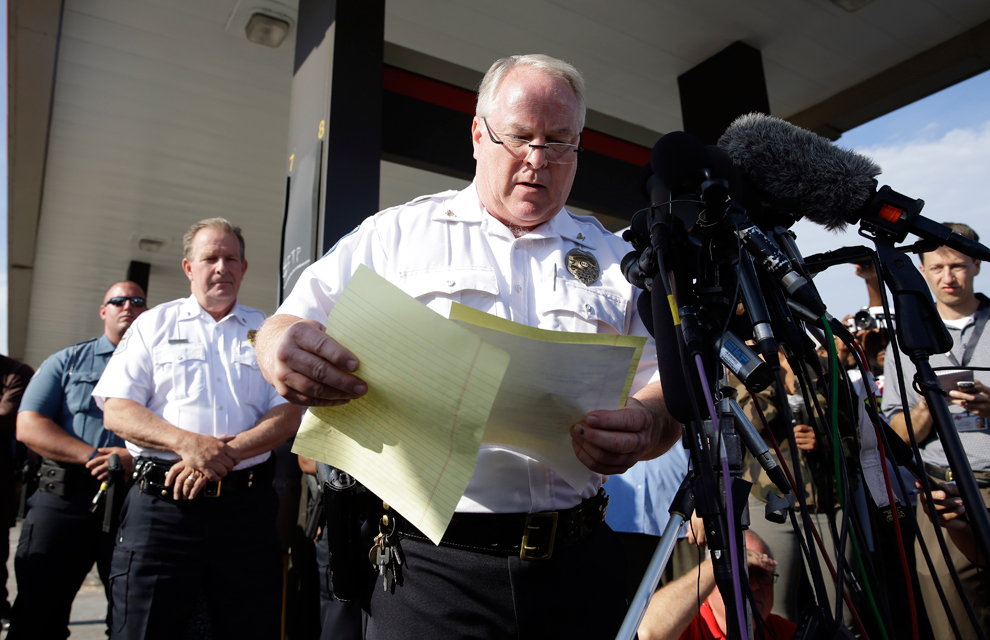 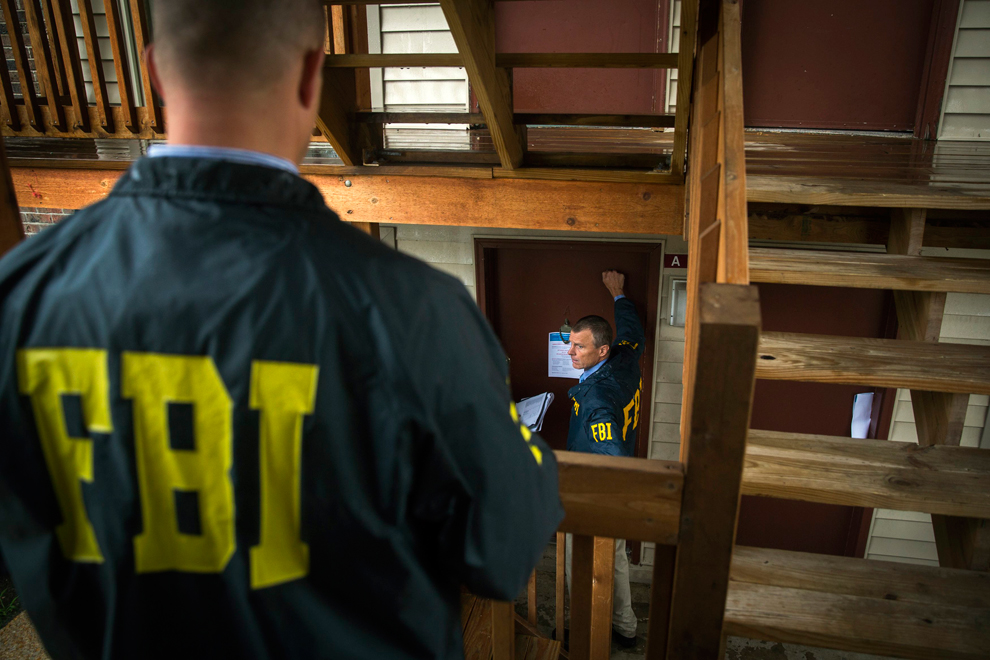 22
Federal Bureau of Investigation (FBI) agents go door to door to interview residents of the neighborhood where teenager Michael Brown was shot, in Ferguson, Mo., on Aug. 16. Tensions had temporarily cooled on Thursday night but by Friday evening, protesters were again swarming through a residential and retail district in the small town outside St. Louis that has become the site of repeated clashes between protestors and police forces. The unrest erupted after Ferguson police officer Darren Wilson, 28, shot and killed Brown shortly after noon last Saturday as Brown and a friend walked down a street that runs through an apartment complex where Brown's grandmother lives. (Lucas Jackson/Reuters) # 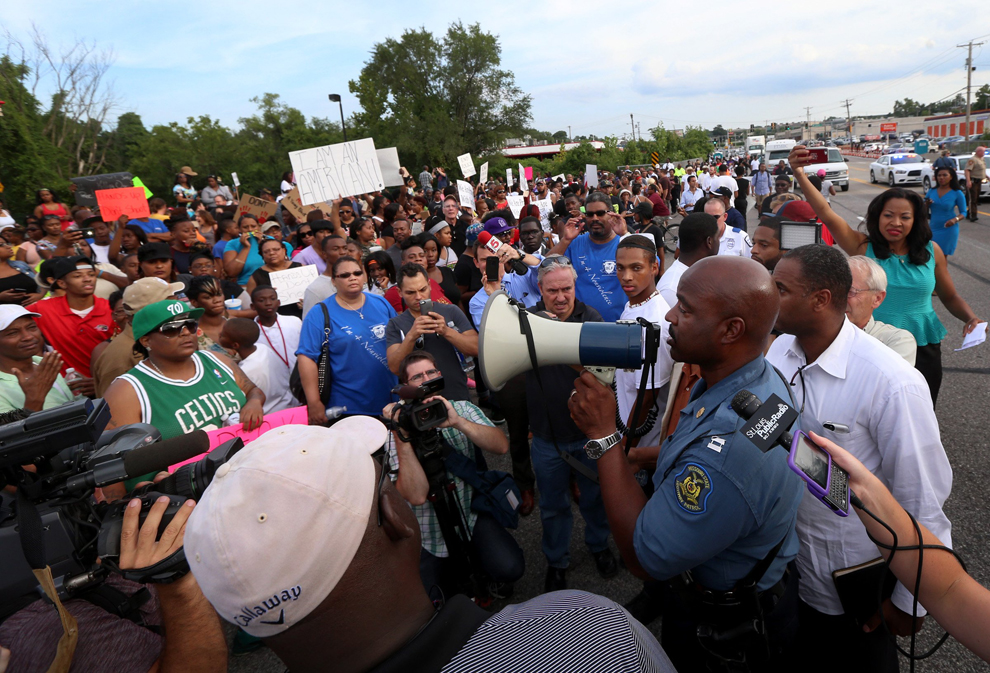 23
Missouri State Highway Patrol Capt. Ronald Johnson addresses the crowd of protesters, asking them to stay on the sidewalk and not block traffic on Aug. 14 in Ferguson, Mo. The Missouri Highway Patrol took control of a St. Louis suburb Thursday, stripping local police of their law-enforcement authority after four days of clashes between officers in riot gear and furious crowds protesting the death of an unarmed black teen shot by an officer. (David Carson/St. Louis Post-Dispatch via Associated Press) # 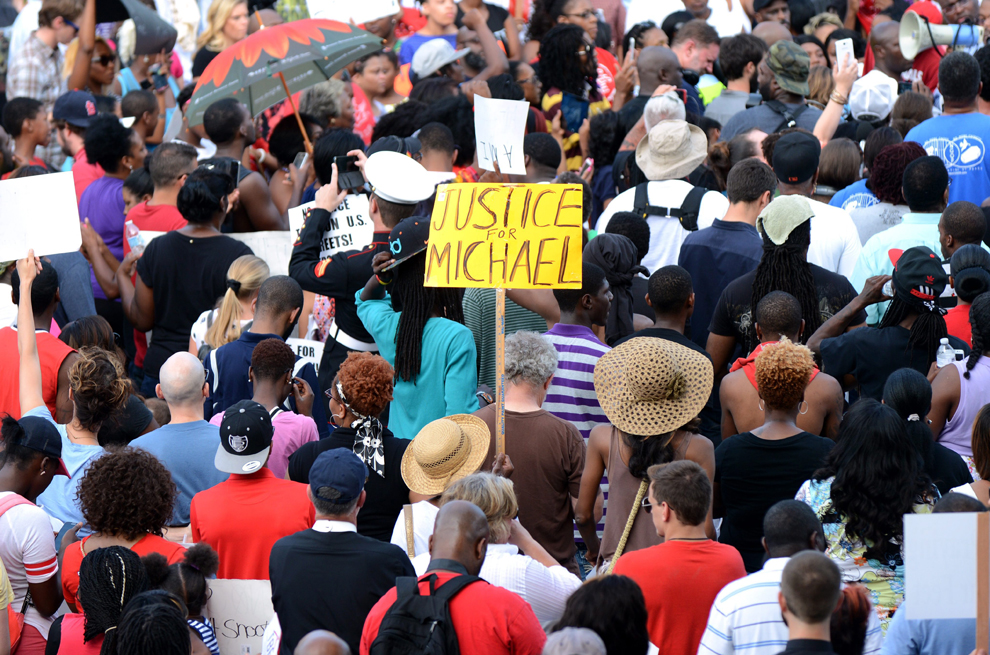 24
A large group of protesters gather near the site where Michael Brown was killed after marching on West Florissant Avenue in Ferguson on Aug. 14. (Robert Rodriguez/EPA) # 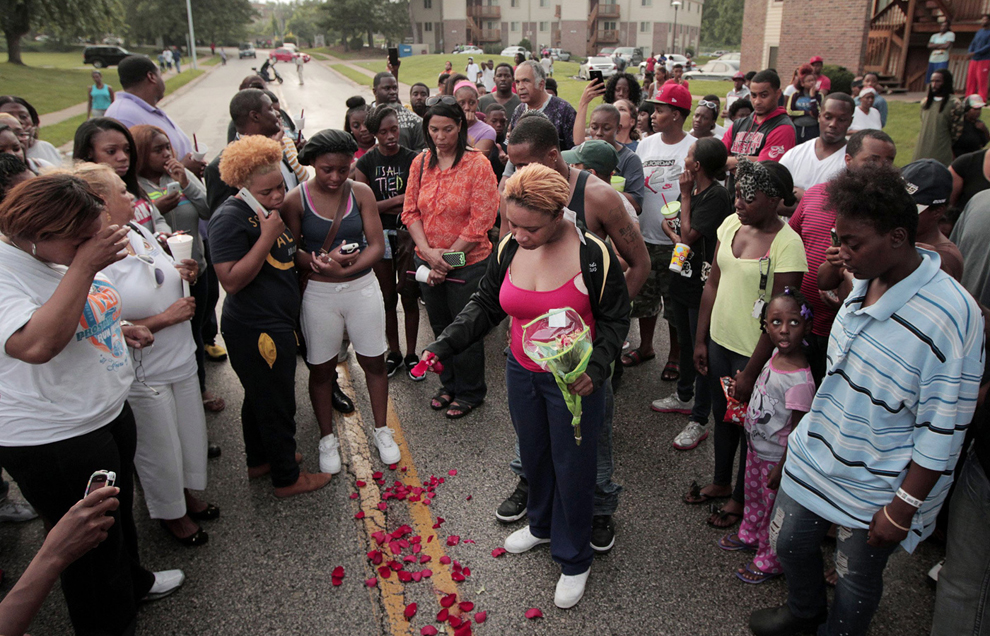 25
Lesley McSpadden, center, drops rose petals on the blood stains from her 18-year-old son Michael Brown who was shot and killed by police in the middle of the street in Ferguson, Mo., near St. Louis on Aug. 9. McSpadden, told an acquaintance the shooting was "wrong and it was cold-hearted," the St. Louis Post-Dispatch reported. A spokesman with the St. Louis County Police Department, which is investigating the shooting at the request of the local department, confirmed a Ferguson police officer shot the man. The spokesman didn't give the reason for the shooting. (Huy Mach/St. Louis Post-Dispatch via Associated Press) #
< Back to front page
RECENT ENTRIES