Survivors of an earthquake that struck rural Pakistan earlier this week are still waiting for aid, an effort being hampered because militants in the region have been attacking government troops as they try to deliver relief supplies. The quake, which measured 7.7 in magnitude, has claimed more than 350 lives, injured more than 750, and damaged dozens of homes. Most of the victims were crushed when the walls of their mud brick houses caved in. Residents said the quake hit during the few hours of the day when the village had electricity, so many children were at home watching television. -- Lloyd Young ( 22 photos ) 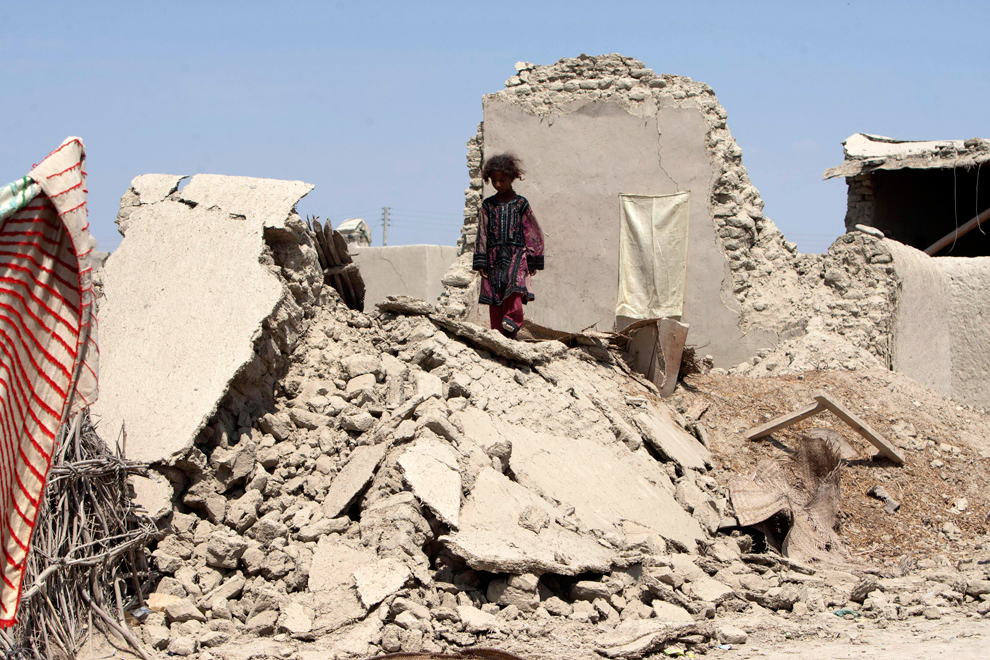 A Pakistani girl walks on the rubble of a house destroyed following an earthquake in Labach, the remote district of Awaran in Baluchistan province, Pakistan, on Sept. 26. Two days after the tremor struck, rescuers were still struggling to help survivors. The death toll from the quake reached in the hundreds on Thursday, with more than 500 people injured. (Shakil Adil/Associated Press) 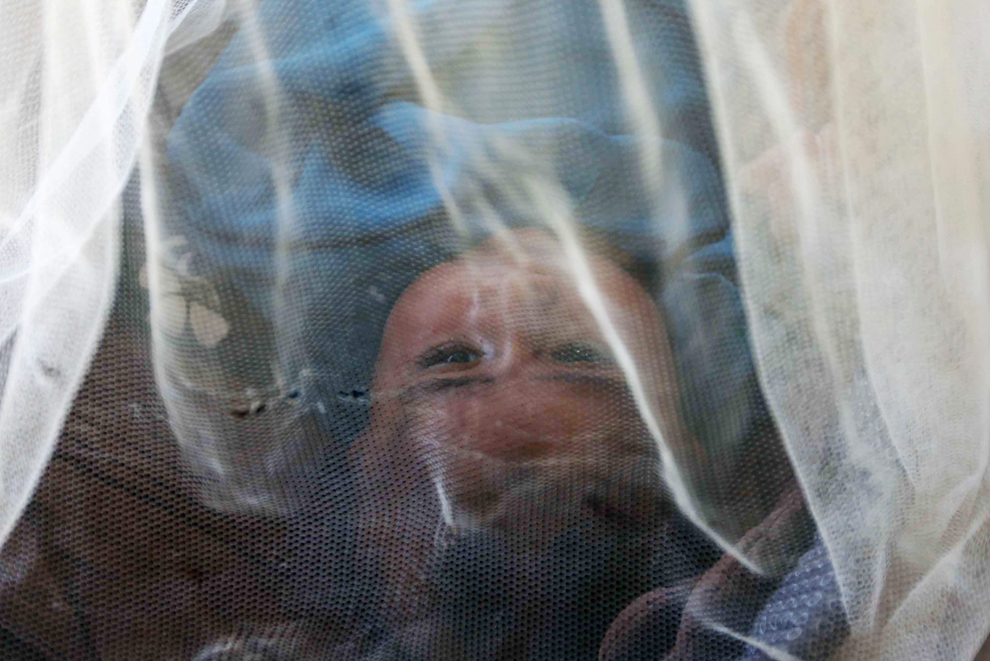 2
A child affected from the 7.7 magnitude earthquake is seen under a mosquito net inside a makeshift tent, in Awaran, Balochistan province on Sept. 26. (Shahzaib Akber/European Pressphoto Agency) # 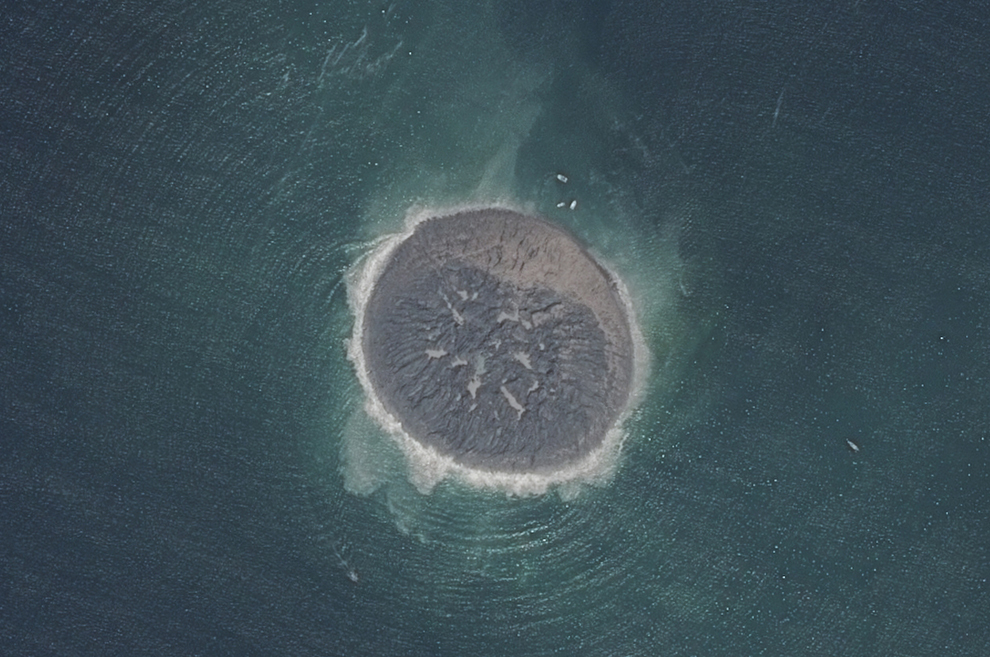 3
A picture taken by Pleiades satellite and released on Sept.27 shows a small island of mud and rock created by the huge earthquake that hit southwest Pakistan has fascinated locals but experts who found methane gas rising from it say it is unlikely to last long. The island is about 60 to 70 feet (18 to 21 metres) high, up to 300 feet wide and up to 120 feet long and sits about 650 feet from the coast. (AFP/Getty Images) # 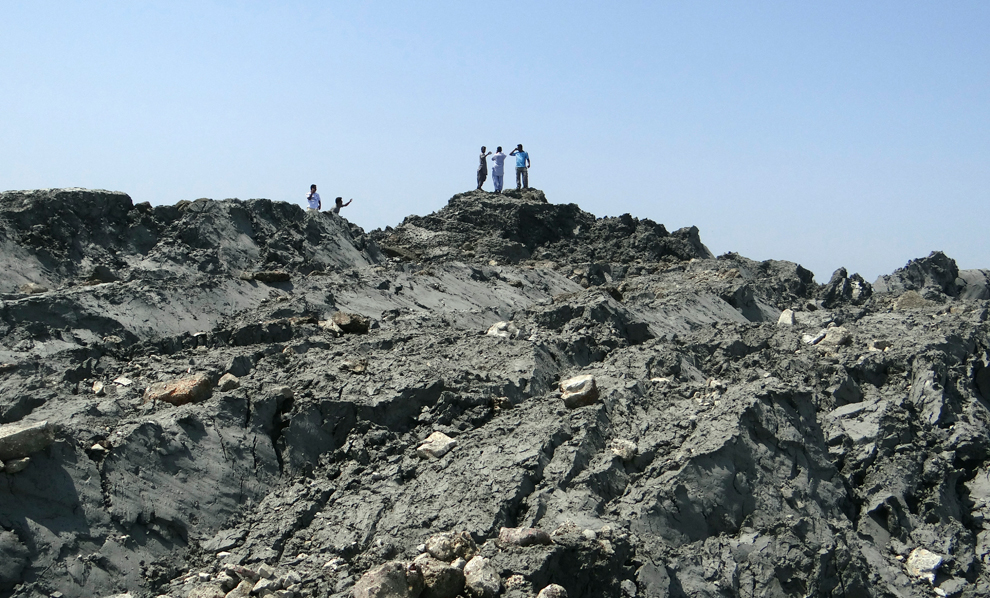 4
People walk on an island that reportedly emerged off the Gwadar coastline in the Arabian Sea. A deadly magnitude 7.7 earthquake struck in the remote district of Awaran in Pakistan's Baluchistan province with enough force to create a small island visible off the southern coast, Pakistani officials said. (Gwadar local government office via Associated Press) # 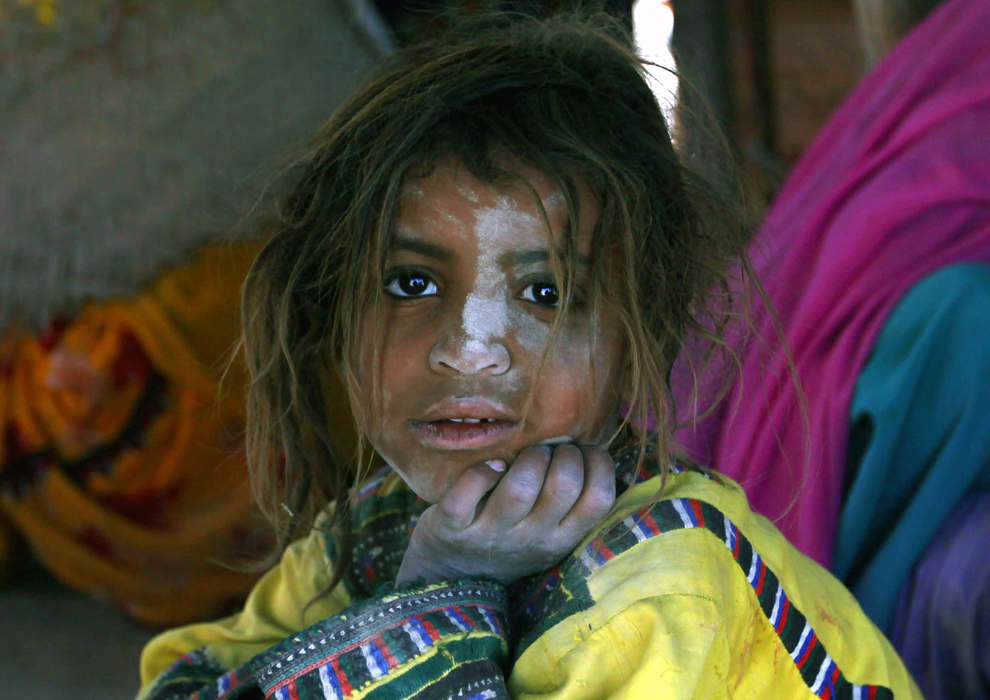 5
A girl affected by the 7.7 magnitude earthquake waits for the relief at her temporary shelter in Awaran, Balochistan province, Pakistan, on Sept. 27. UN chief Ban Ki-moon expressed his condolences and offered UN assistance to Pakistan as separatist threats and difficult access hindered rescue operations in the country's quake-hit southern villages. Rescuers, including over 1,200 military and paramilitary troops, restricted their movements after rebels fired rockets at helicopters and a team of medics was attacked in Awaran district, Balochistan province. (Shahzaib Akber/European Pressphoto Agency) # 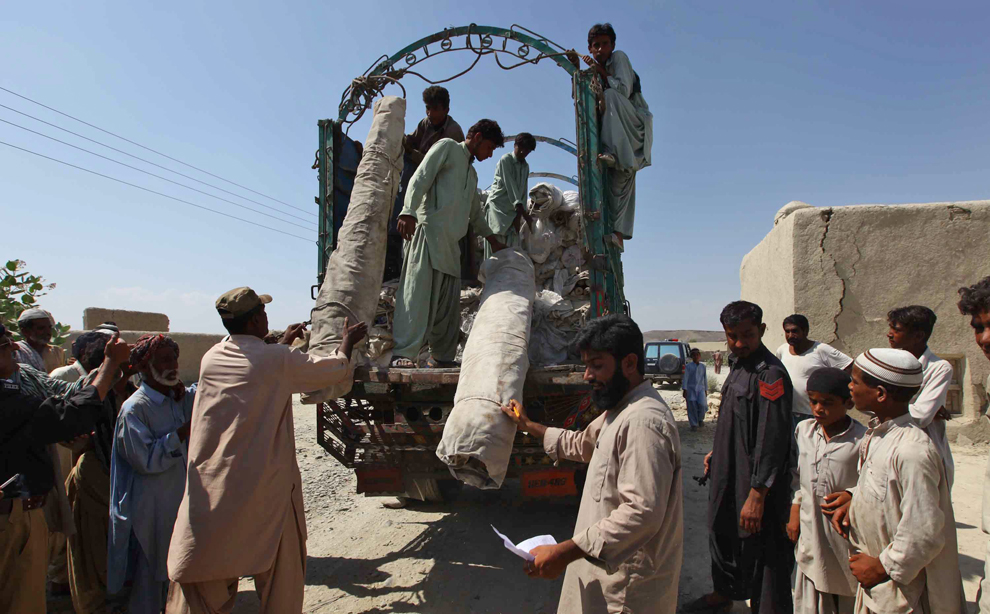 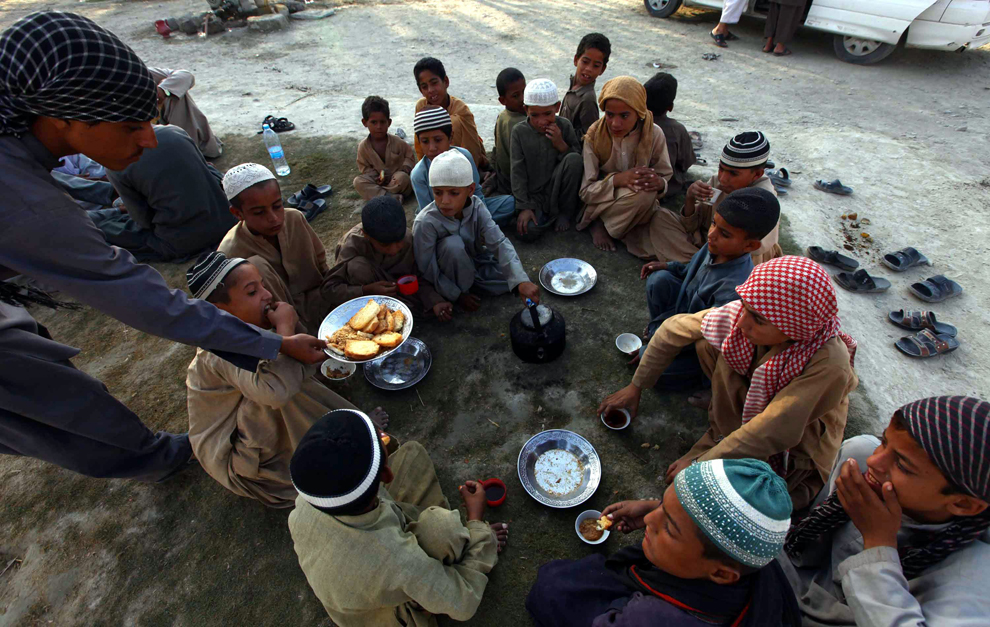 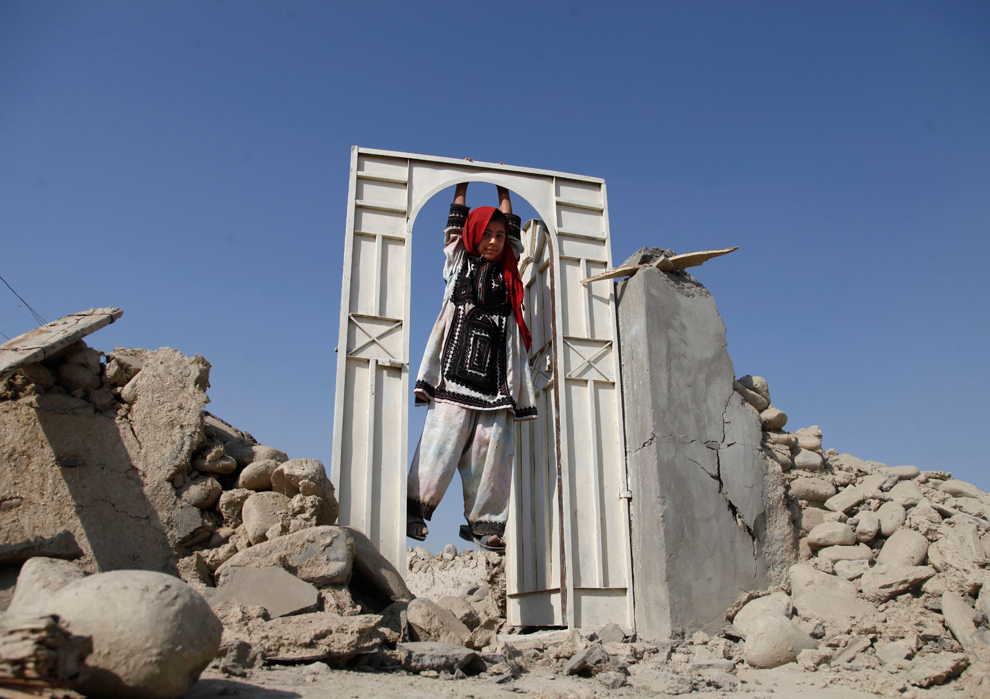 9
A Pakistani girl plays on the doorway of a house which was destroyed in Tuesday's earthquake, in the remote district of Awaran in Baluchistan province, Pakistan, on Sept. 27. Desperate Pakistani villagers in remote areas hit by the massive earthquake this week said they are still waiting for government aid to reach them. (Shakil Adil/Associated Press) # 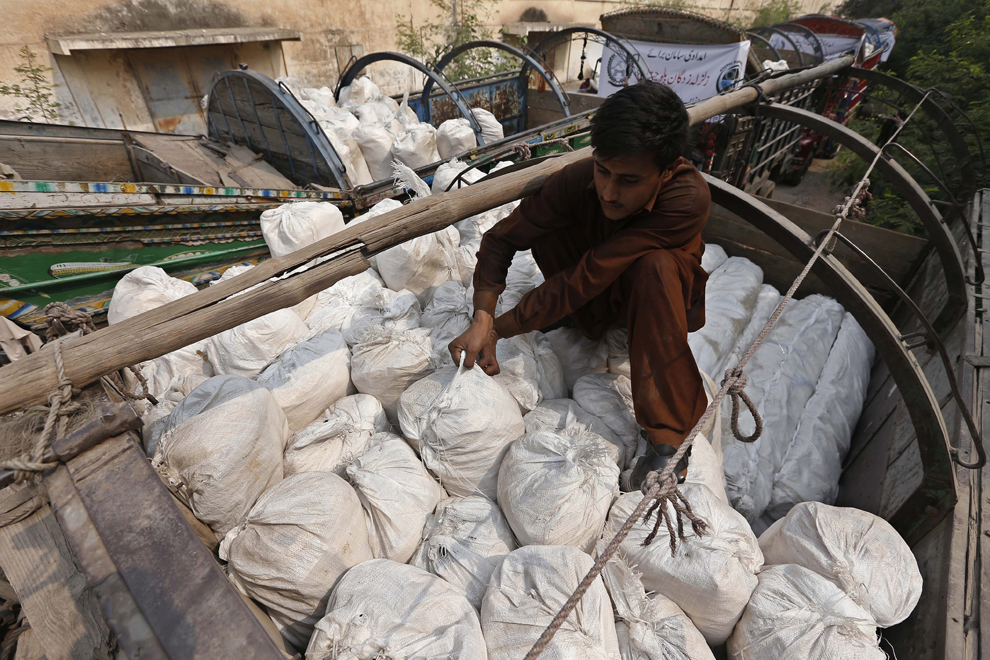 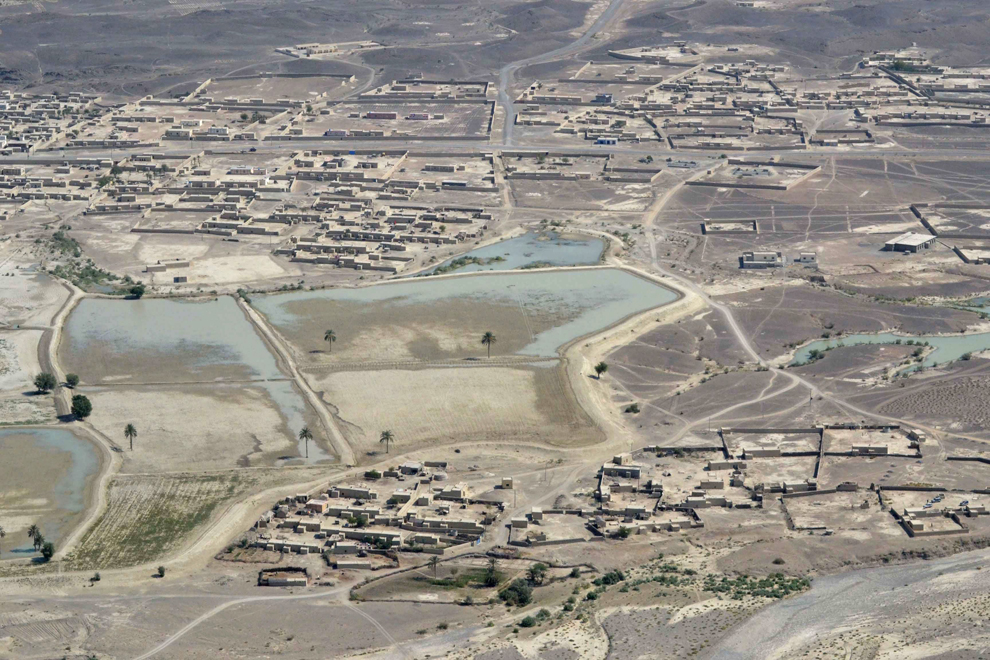 11
An aerial view of areas affected by the 7.7 magnitude earthquake in Awaran, Balochistan province, on Sept. 26. (Fayyaz Ahmed/European Pressphoto Agency) # 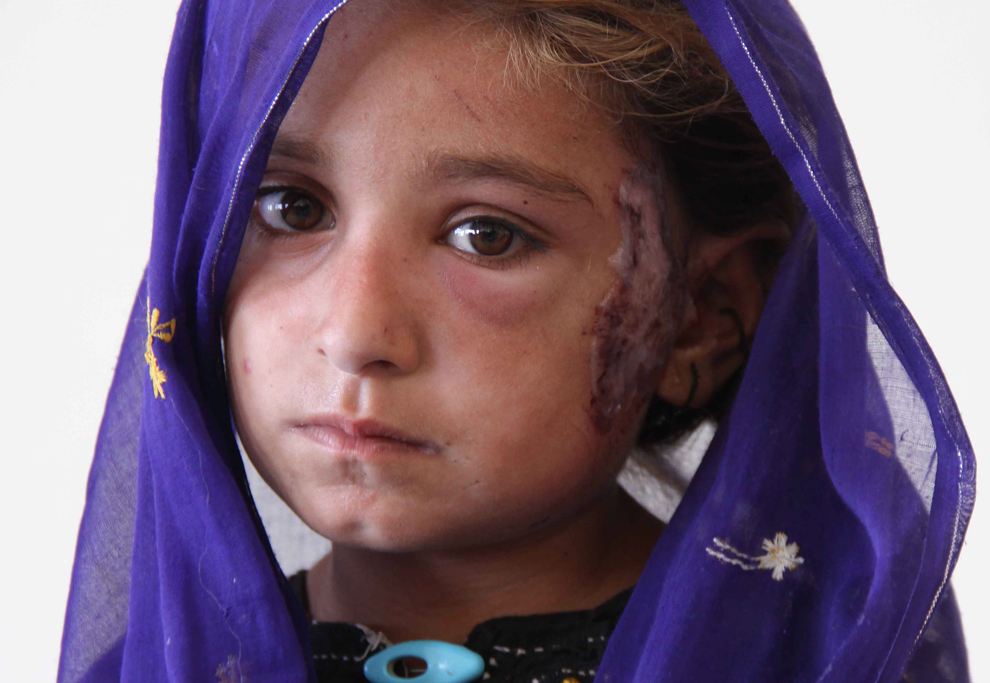 12
A girl affected by the 7.7 magnitude earthquake waits to receive medical treatment at a hospital in Awaran, Balochistan province, on Sept. 26. (Nadeem Khawer/European Pressphoto Agency) # 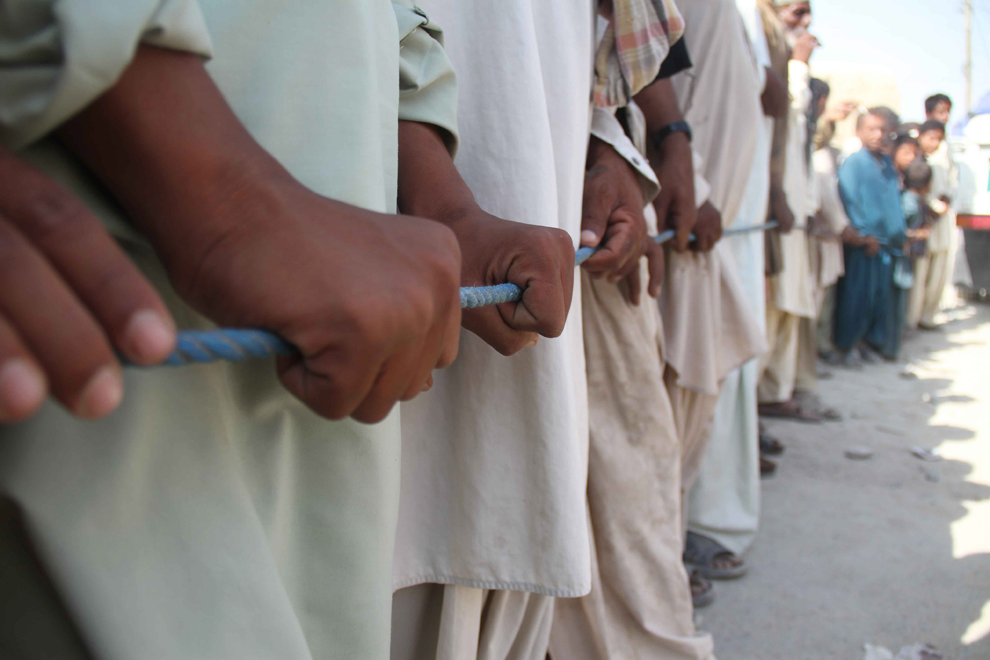 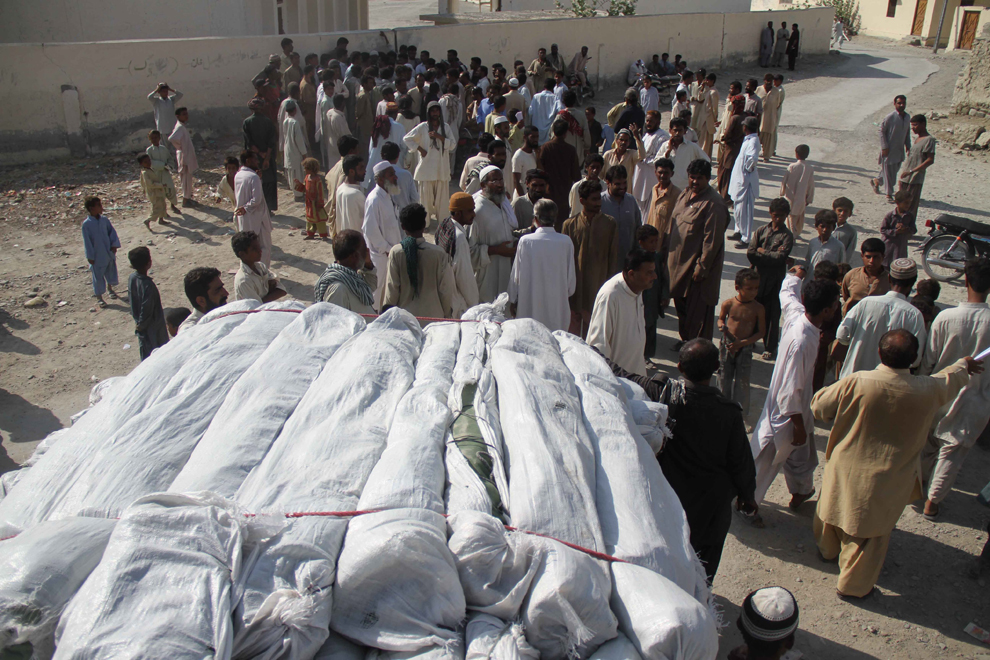 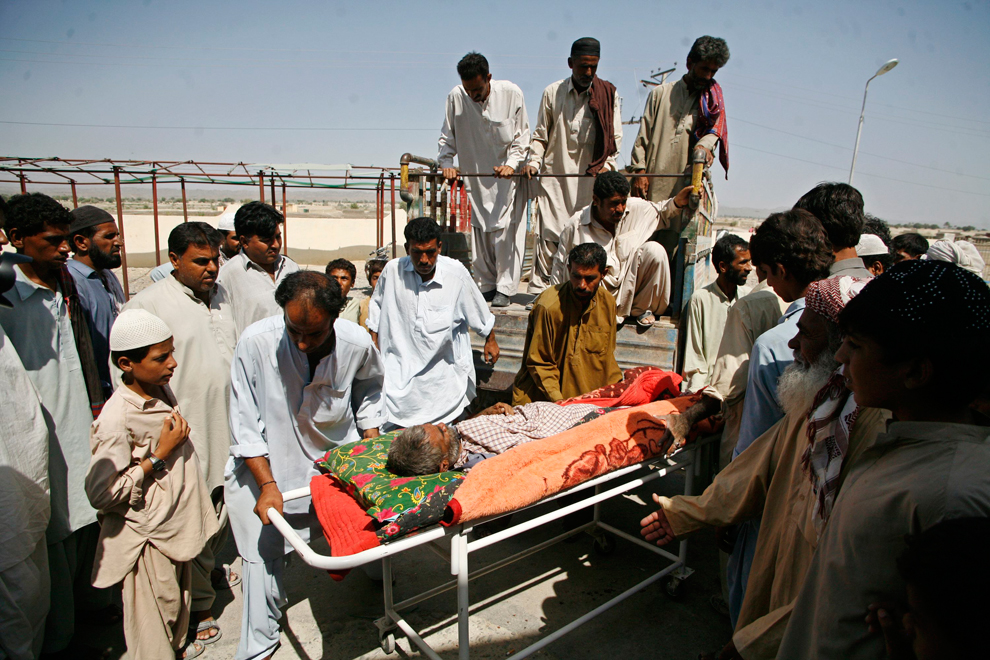 15
Survivors of an earthquake help to wheel a man who was injured in the quake, as he arrives from a remote village for treatment at a hospital in Awaran, southwestern Pakistani province of Baluchistan, on Sept. 26. (Naseer Ahmed/Reuters) # 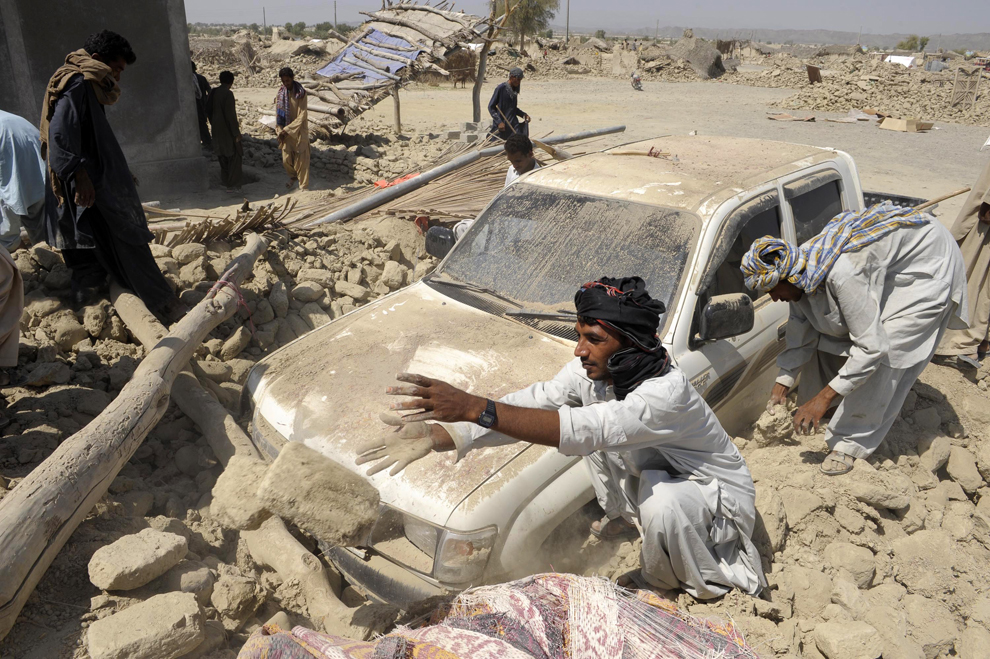 16
Pakistani survivors clear the debris of destroyed houses in the earthquake-devastated district of Awaran on Sept. 25. Desperate villagers in southwest Pakistan clawed through the wreckage of their ruined homes , a day after a huge earthquake struck. (Banaras Khan/AFP/Getty Images) # 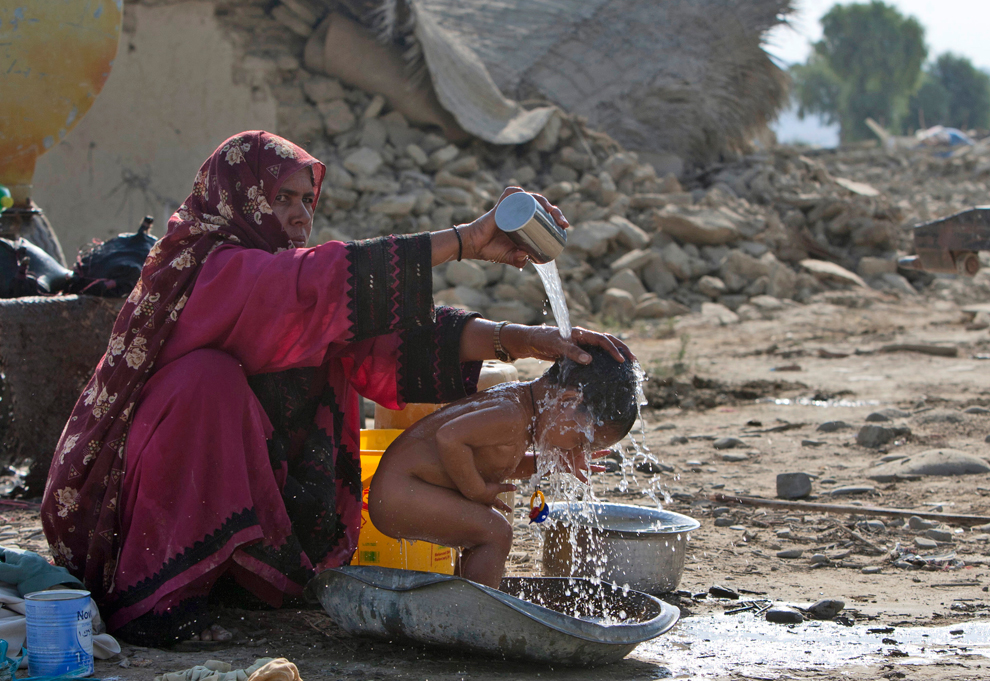 17
A Pakistani woman bathes her child among the rubble of her house on Sept. 27 which was destroyed in the earthquake. Desperate Pakistani villagers in remote areas hit by the massive earthquake this week said they are still waiting for government aid to reach them. (Shakil Adil/Associated Press) # 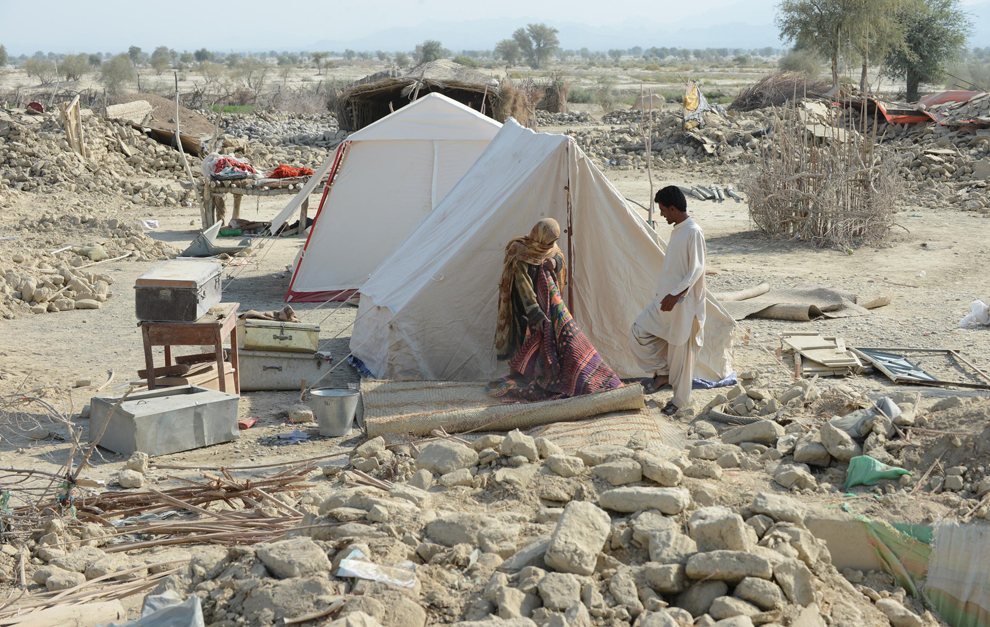 18
Pakistani earthquake survivors stand outside their tent near collapsed mud houses in the Dhall Bedi Peerander area of the earthquake-devastated district of Awaran on Sept. 27. Tens of thousands of survivors of Pakistan's earthquake waited for help in soaring temperatures as the death toll rose to nearly 350 and anger grew at the slow pace of government aid. More than 100,000 people made homeless by a 7.7-magnitude quake spent a second night in the open or under makeshift shelters as response teams struggled to reach the remote region in the southwestern province of Baluchistan. (Banaras Khan/AFP/Getty Images) # 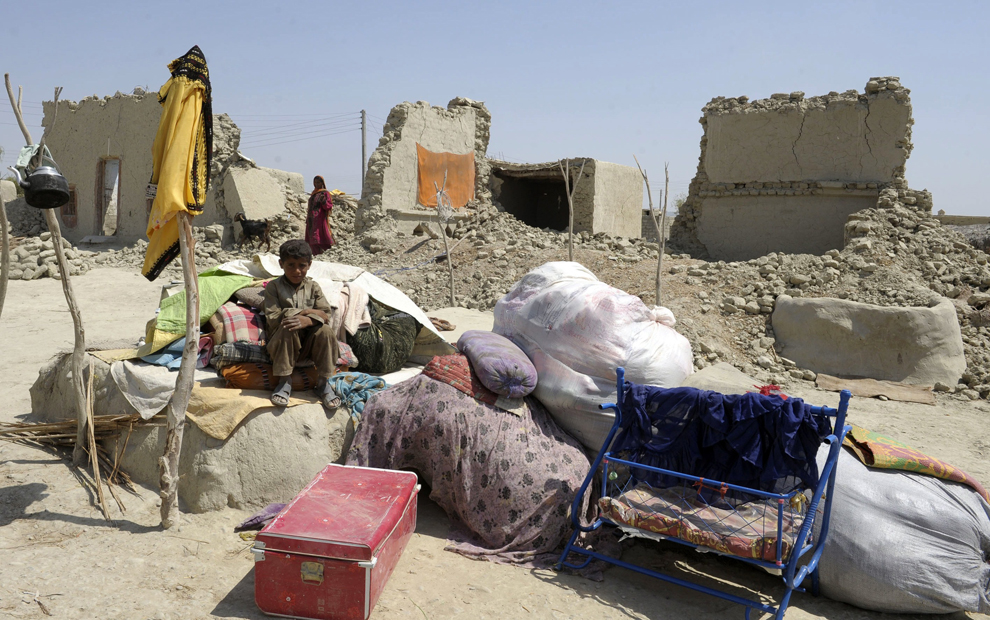 19
A young Pakistani earthquake survivor sits on his belongings beside his collapsed mud house at Labch area in the earthquake devastated district of Awaran on Sept. 26. (Banaras Khan/AFP/Getty Images) # 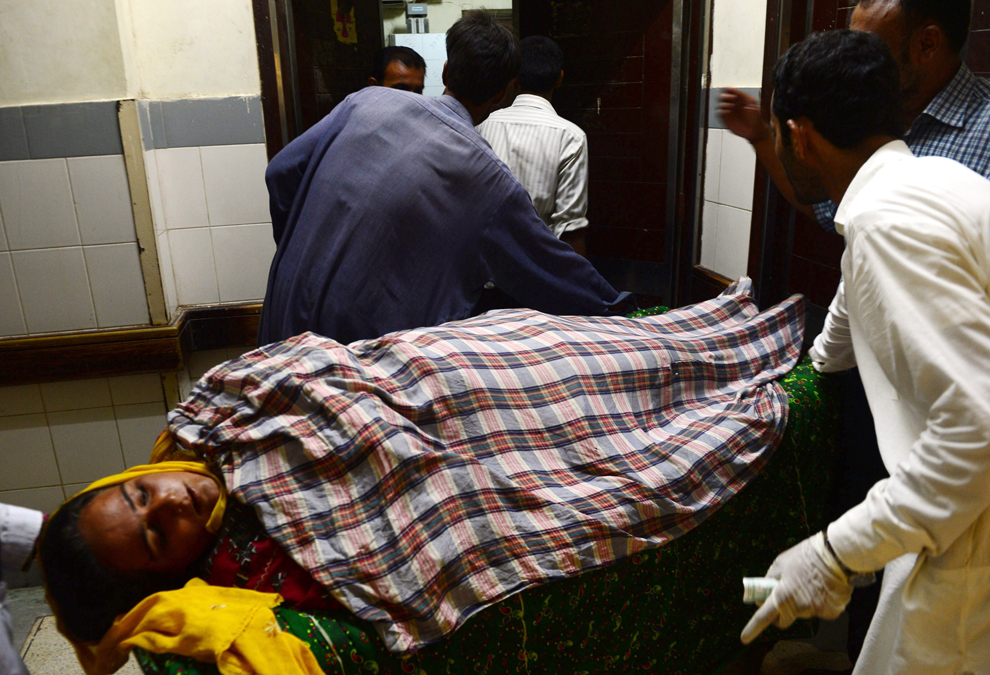 20
Pakistani paramedics move an injured earthquake survivor at a hospital in Karachi on Sept. 25. Desperate villagers in southwest Pakistan clawed through the wreckage of their ruined homes on the day after a huge earthquake struck, killing more than 300 people and creating a new island off the coast. (Rizwan Tabassum/AFP/Getty Images) # 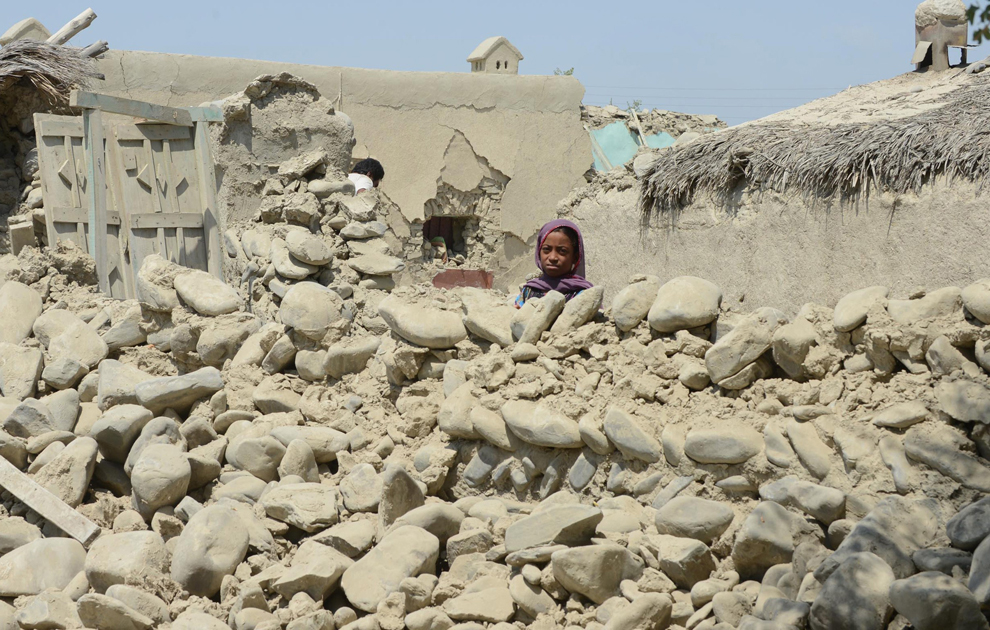 21
A Pakistani earthquake survivor looks out from her collapsed mud house at Labach area, in the earthquake devastated district of Awaran on Sept. 26. (Banaras Khan/AFP/Getty Images) # 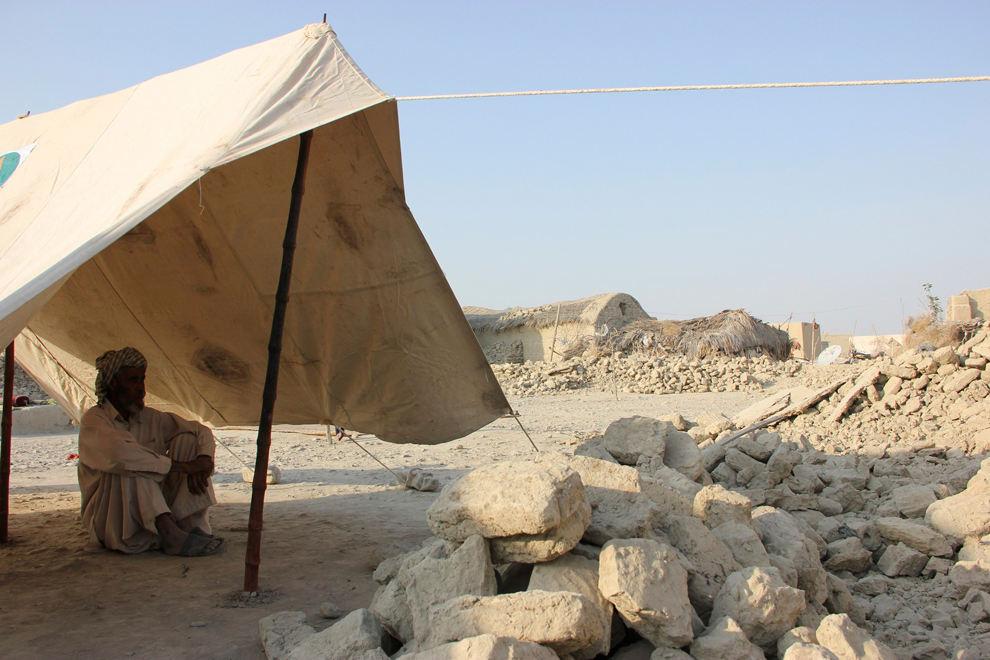 22
A survivor of an earthquake sits in a makeshift tent near the rubble of mud houses which collapsed following the quake in the town of Awaran, in the south-western Pakistani province of Baluchistan, on Sept. 27. The death toll from the powerful earthquake in southwest Pakistan rose to over 350 after hundreds of mud houses collapsed on residents throughout the remote and thinly populated area, local officials said. (Sallah Jan /Reuters) #
< Back to front page
RECENT ENTRIES