An unexpected downpour briefly drenched parts of the US this week, while most of the central and southern United States continued to experience drought conditions - expected to be the most expansive drought in a half century. In the South, 14 states are now baking in blast-furnace conditions - from Arizona, which is battling the largest wildfire in its history, to Florida, where fires have burned some 200,000 acres so far. More than 70 percent of the nine-state Midwest was in some stage of drought this week. More extreme heat and scant rains were expected in the area, suggesting the poorest crop conditions since the historic 1988 drought. The visual documentation of the breadth and depth of the current drought conditions has just begun. This is a small sampling of images, expect much more storytelling to come in the weeks ahead. -- Paula Nelson (24 photos total) 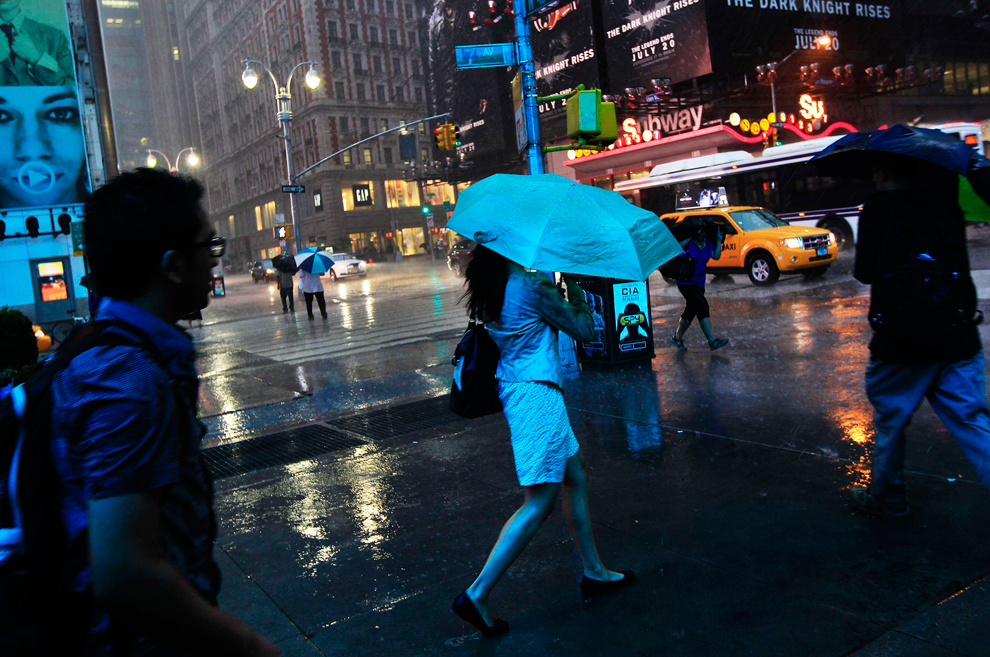 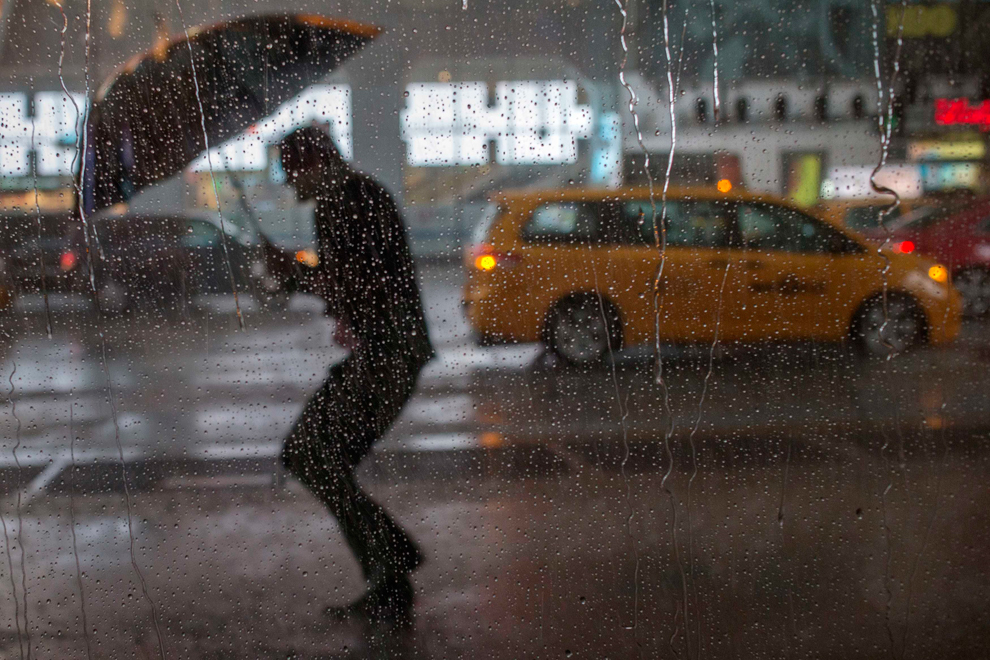 2
A commuter uses an umbrella while dodging high winds and heavy rain during a thunderstorm in midtown Manhattan, New York, July 18, 2012. (Adrees Latif/Reuters) # 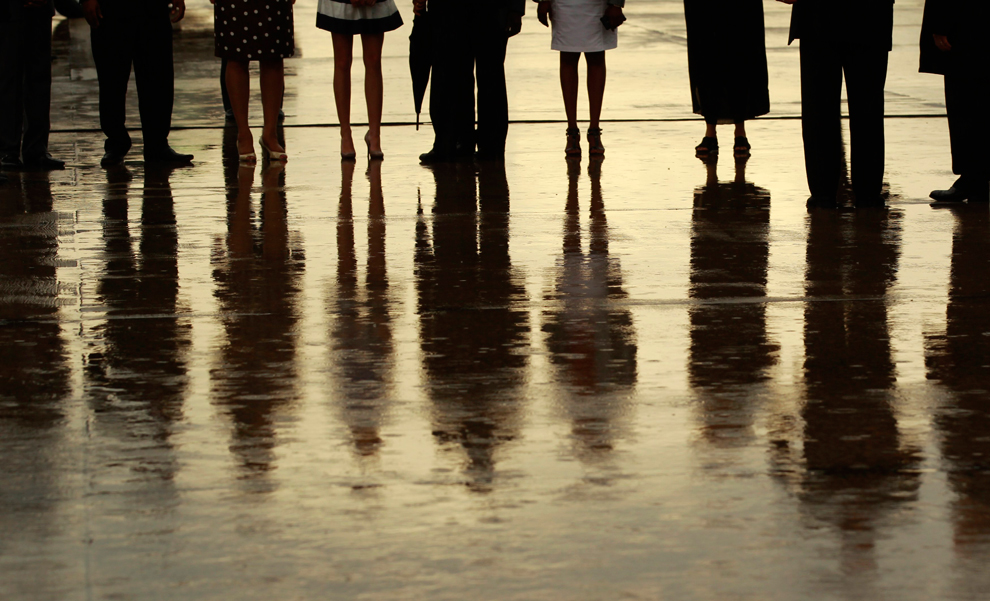 3
U.S. President Barack Obama shakes hands with greeters on a rain-soaked tarmac upon landing in Jacksonville, Florida, July 19, 2012. Obama is on a two-day visit to Florida where he will hold several campaign events. (Kevin Lamarque/Reuters) # 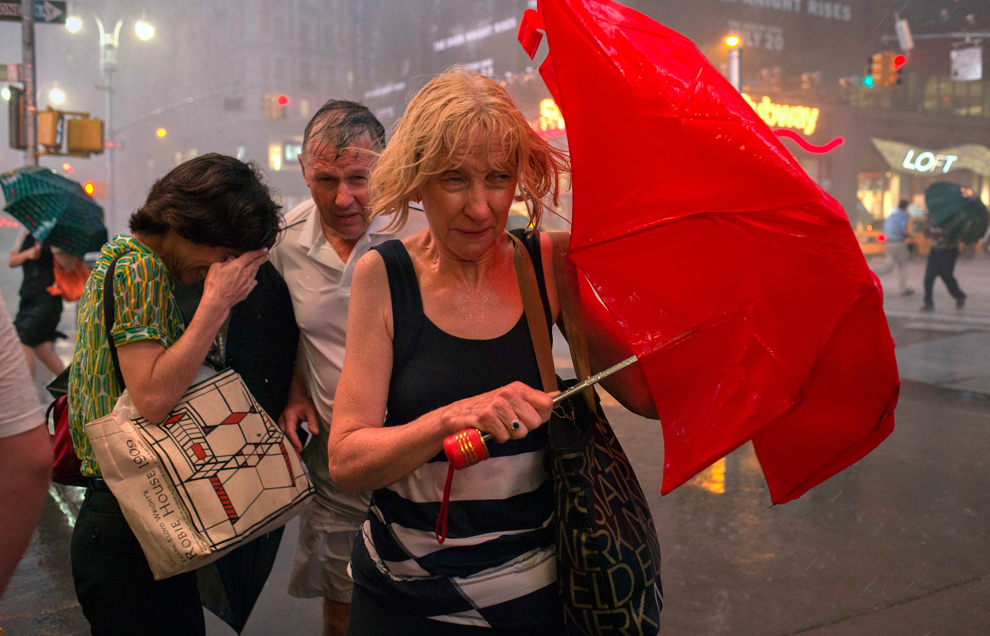 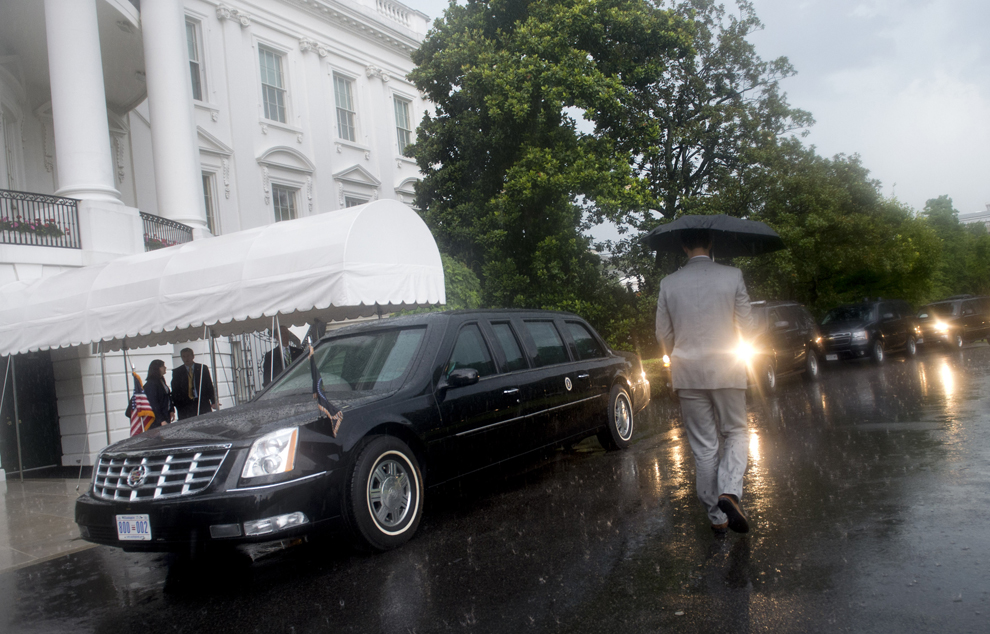 5
A White House staff member walks past the presidential limousine as heavy rain falls on the South Lawn of the White House, July 18, 2012, in Washington, D.C. President Obama was preparing to leave the White House for a campaign event at the Mandarin Oriental Hotel in Washington. (Kevin Dietsch/Getty Images) # 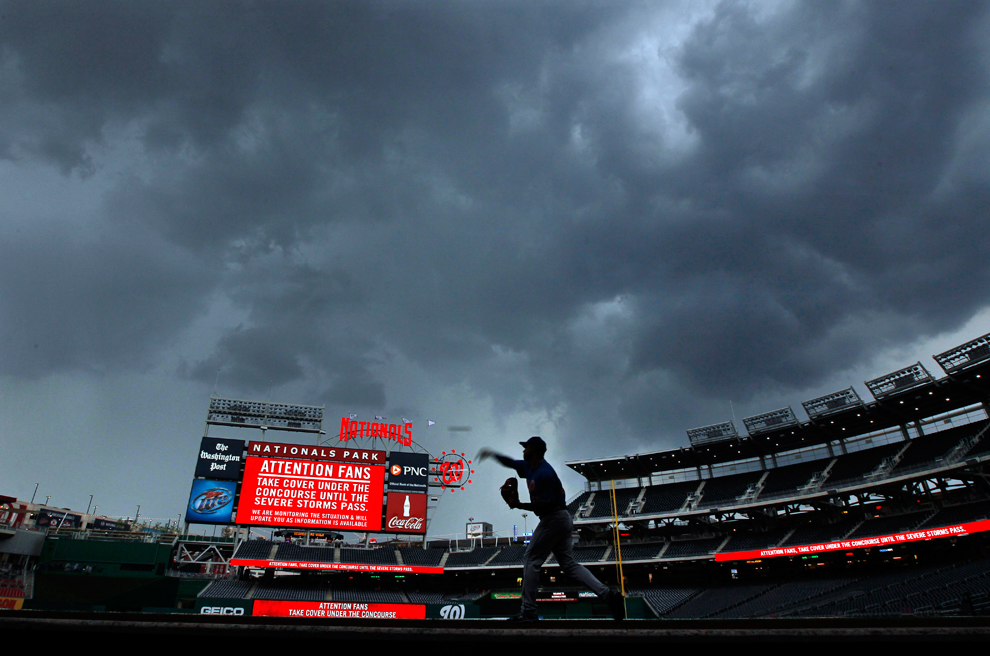 6
New York Mets relief pitcher Miguel Batista warms up in the rain before a baseball game between the Mets and the Washington Nationals, July 18, 2012, in Washington. (Alex Brandon/Associated Press) # 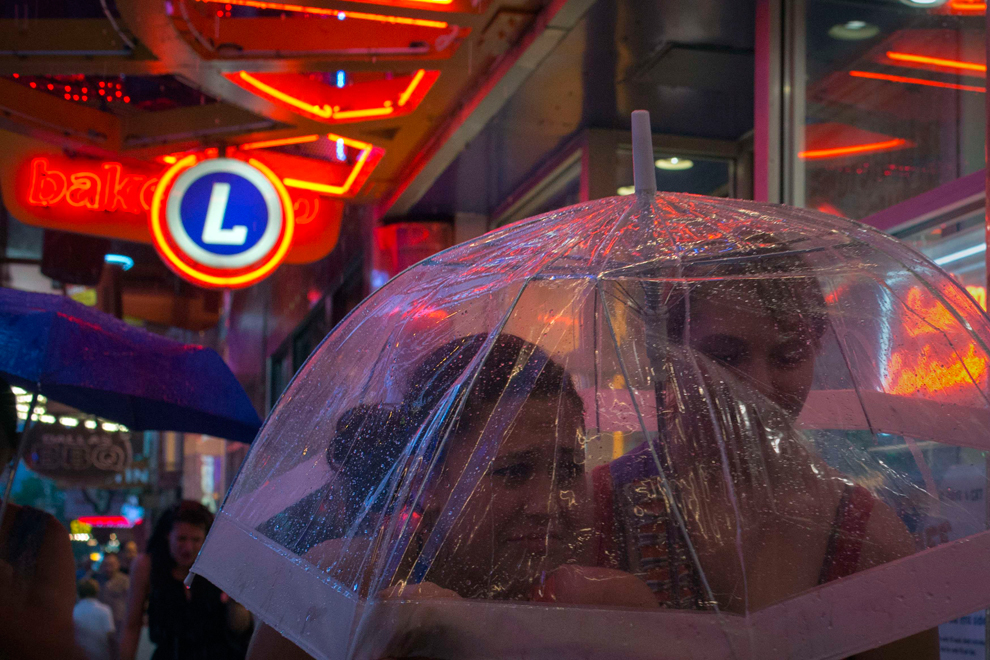 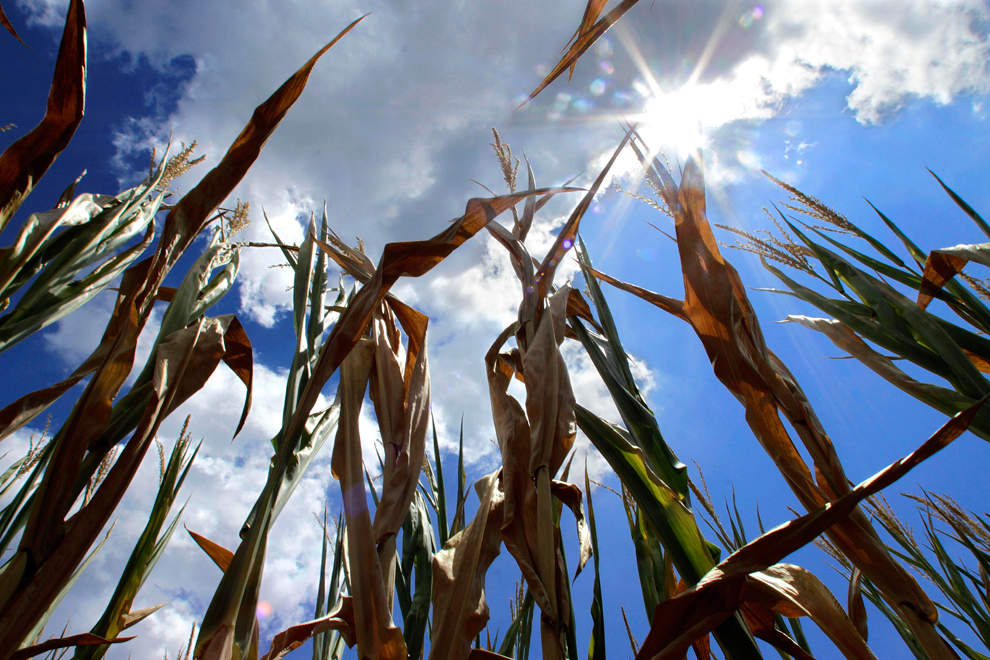 8
Corn stalks struggling from lack of rain and a heat wave covering most of the country, July 16, 2012, Farmingdale, Ill. The nation's widest drought in decades is spreading. More than half of the continental U.S. is now in some stage of drought, and most of the rest is abnormally dry. (Seth Perlman/Associated Press) # 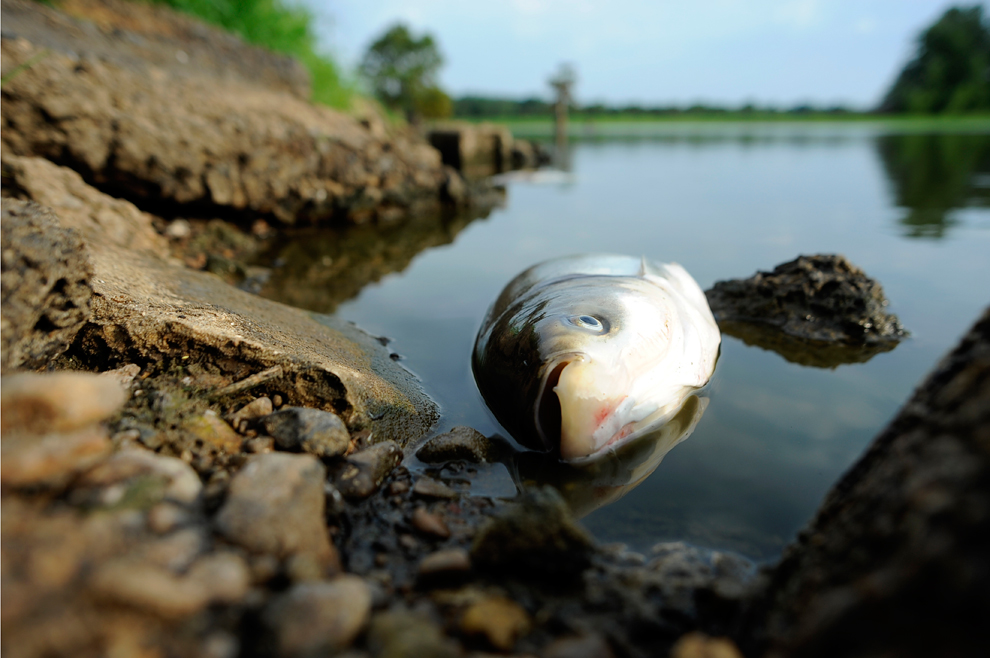 9
A dead fish in Mitchell Lake in the Ballard Wildlife Management Area near Barlow, Ky., as lack a of rain and excessive heat deplete oxygen from the water, July 18, 2012. (Stephen Lance Dennee/Associated Press) # 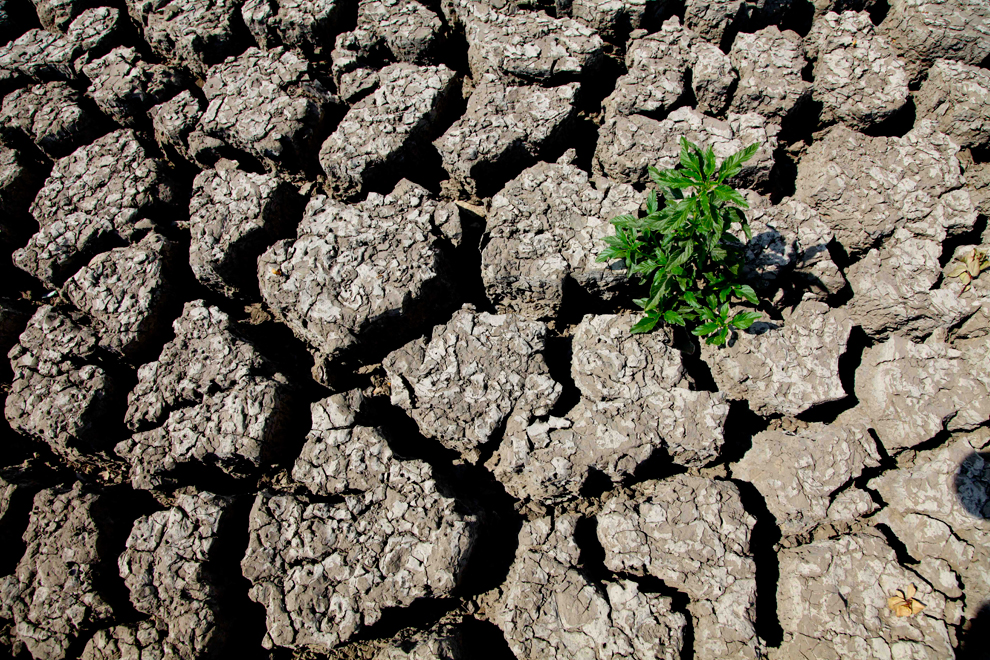 10
The exposed bottom of the Mississippi River is baked and cracked by extreme heat and lack of rain, July 17, 2012, near St. Louis. The nation's widest drought in decades is spreading, with more than half of the continental United States now in some stage of drought. (Robert Ray/Associated Press) # 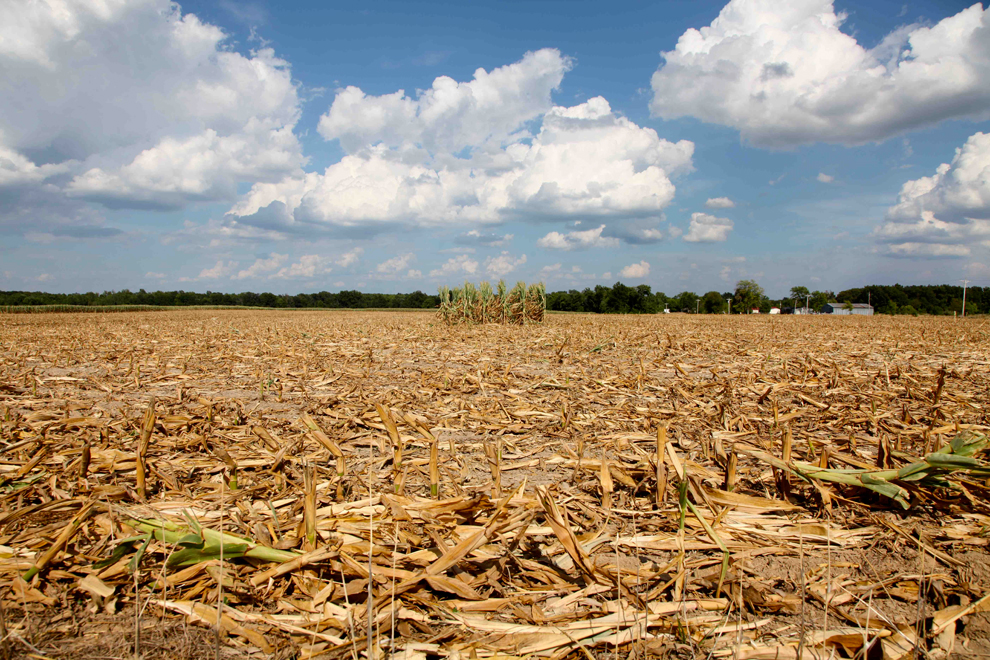 11
Four rows of corn left for insurance adjusters to examine are all that remain of a 40-acre cornfield in Geff, Illinois, July 16, 2012. Over ten days of triple digit temperatures with little rain in the past two months is forcing many farmers to call 2012 a total loss. (Robert Ray/Associated Press) # 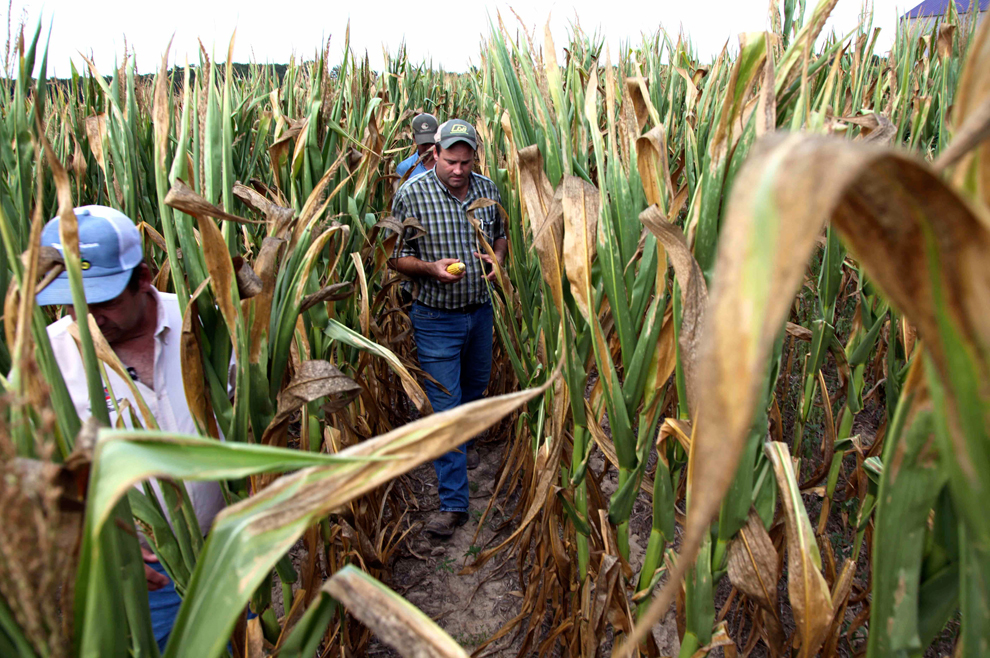 12
Rodney Byars walks ahead of his brother, Rich, through a field of dead and stalled corn in Geff, Illinois. Over 50 percent of the U.S. is in drought and in the southern part of Illinois they have endured extreme heat and very little rain for more than two months. (Robert Ray/Associated Press) #

13
Tom Lubbehusen, owner of Lubbehusen Farm, cuts and grinds the drought-effect corn in the field on his farm to make feed for his cattle. The corn was damaged from drought conditions in Dale, Indiana, July 18, 2012. Oppressive heat and a worsening drought in the U.S. Midwest pushed grain prices near or past records as crops wilted, cities baked and concerns grew about food and fuel price inflation in the world's top food exporter. (John Sommers II/Reuters) # 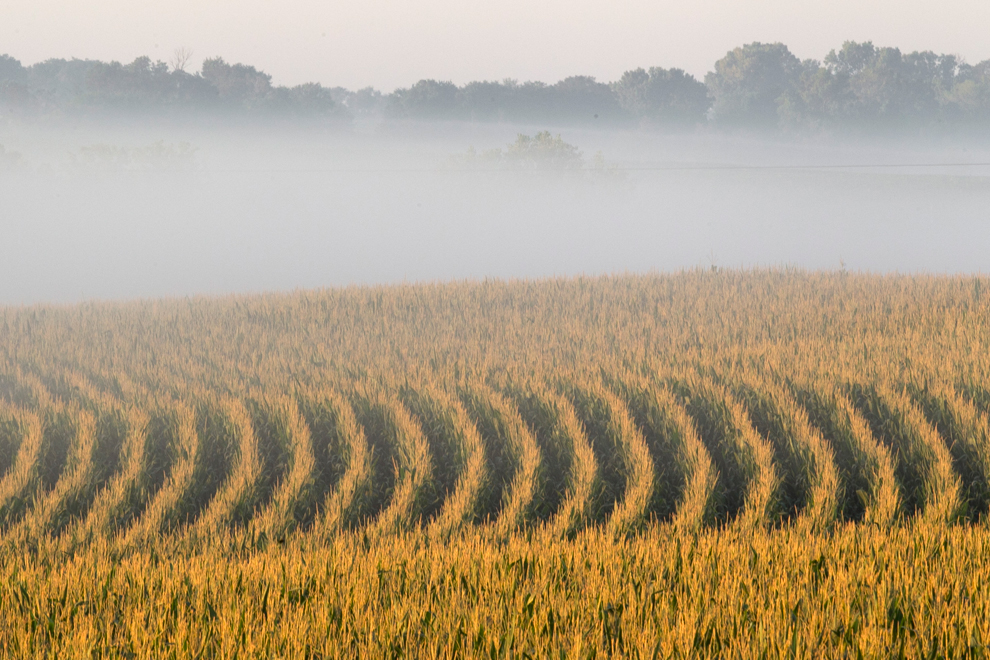 14
A corn field disappears under a shroud of mist at sunrise in rural Springfield, Neb., July 19, 2012. The drought gripping the United States is the widest since 1956. (AP Photo/Nati Harnik/Associated Press) # 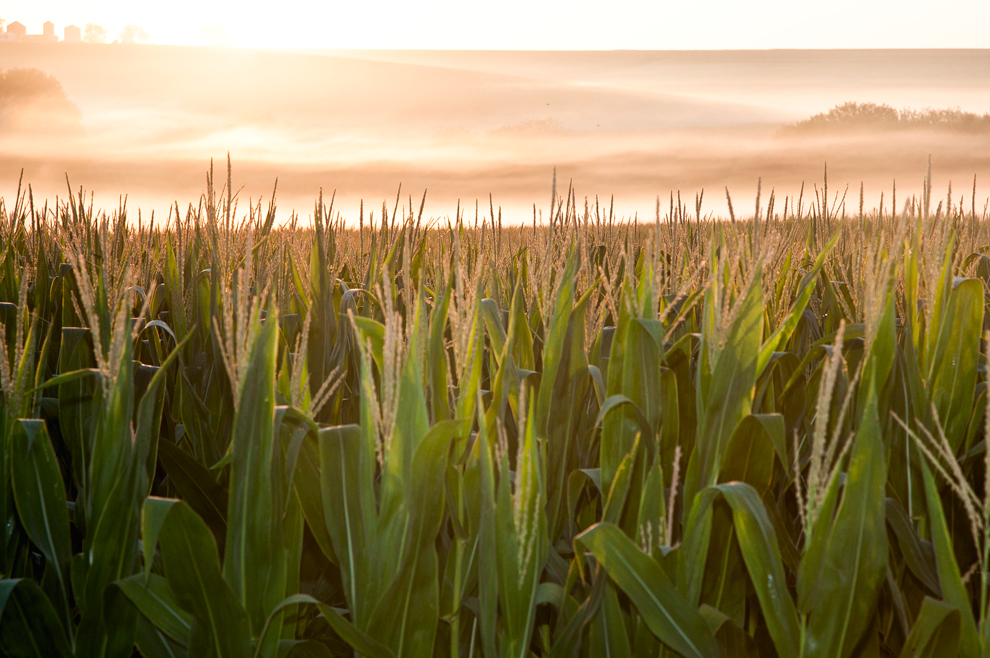 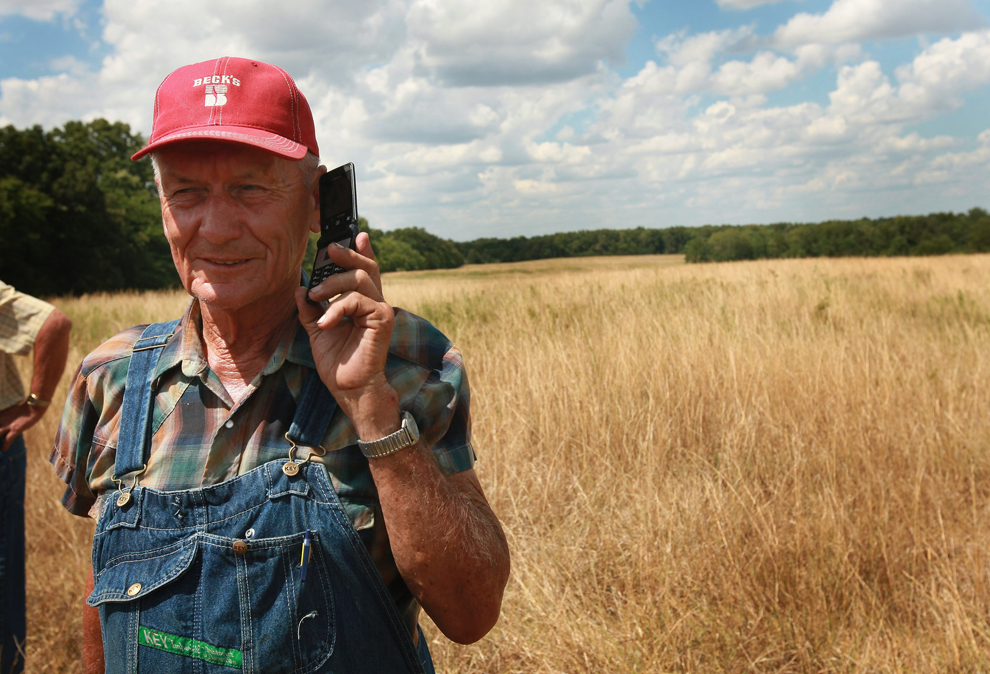 16
Farmer Marion Kujawa holds his phone so his wife can listen in on a press conference being held by Illinois Gov. Pat Quinn to discuss drought conditions at the farm of Jerry Kitowski, July 16, 2012 in Waltonville, Illinois. The Illinois Farm Bureau says the state is experiencing the sixth driest year on record. Illinois is the nation's second largest producer of corn behind Iowa. (Scott Olson/Getty Images) # 17
Kujawa looks over an ear of corn picked from one of his fields, July 16, 2012 near Ashley, Illinois. The field from which the corn was picked has yielded more than 180 bushels of corn per acre in past years, Kujawa expects to get less than 15 bushels per acre from this year's drought-damaged crop. According to the Illinois Farm Bureau the state is experiencing the sixth driest year on record. (Scott Olson/Getty Images) # 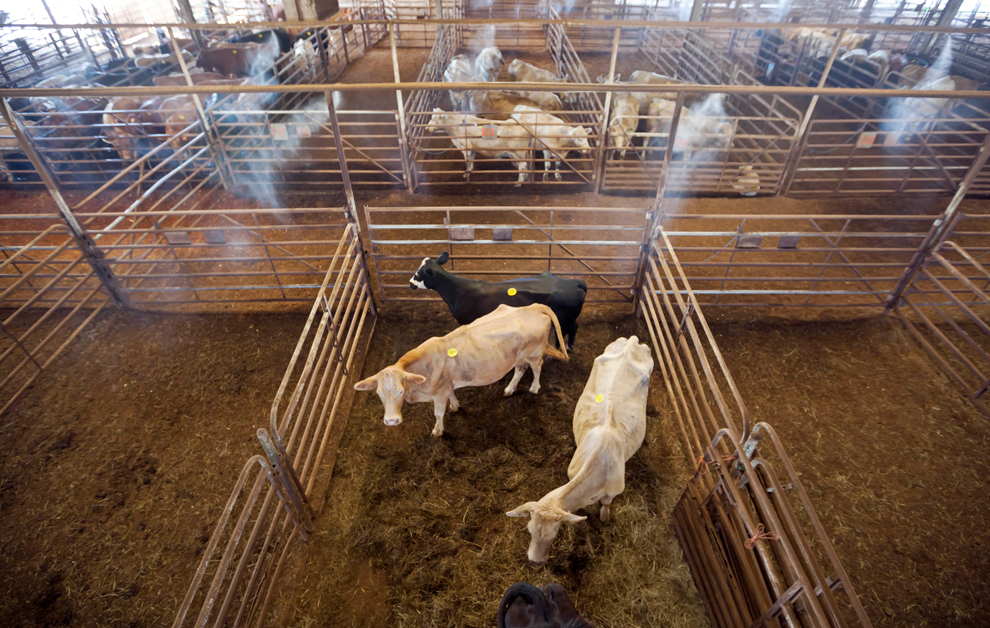 18
Cattle wait in pens before an auction sale in Conway, Ark., July 17, 2012. Many ranchers are selling their livestock during drought conditions rather than pay high prices for hay. The nation's widest drought in decades is spreading.(Danny Johnston/Associated Press) # 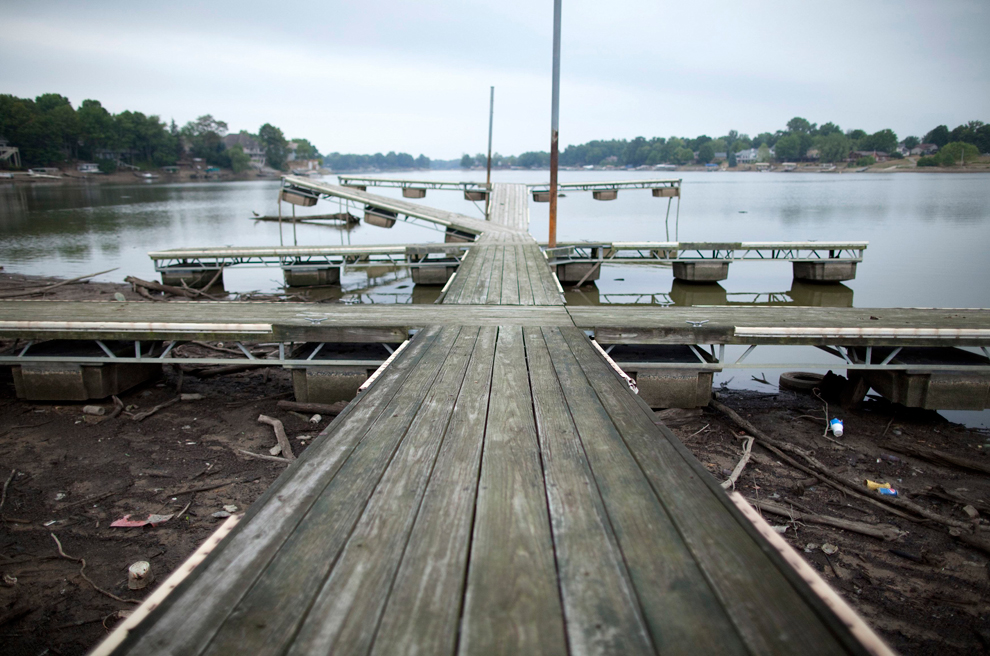 19
A boat dock rests in mud at the Morse Reservoir as water levels drop due to the current drought near Cicero, Indiana, July 19, 2012. More than 70 percent of the nine-state Midwest was in some stage of drought in the week that ended July 17, up from 63 percent the prior week, according to the Drought Monitor, a weekly report on drought throughout the country compiled by climate experts. (Chris Bergin/Reuters) # 20
Corn plants dry in a drought-stricken farm field, July 16, 2012 near Shawneetown, Illinois. The corn and soybean belt in the middle of the nation is experiencing one of the worst droughts in more than five decades. According to the Illinois Department of Agriculture 48 percent of the state's corn crop is currently in poor to very poor condition. (Scott Olson/Getty Images) # 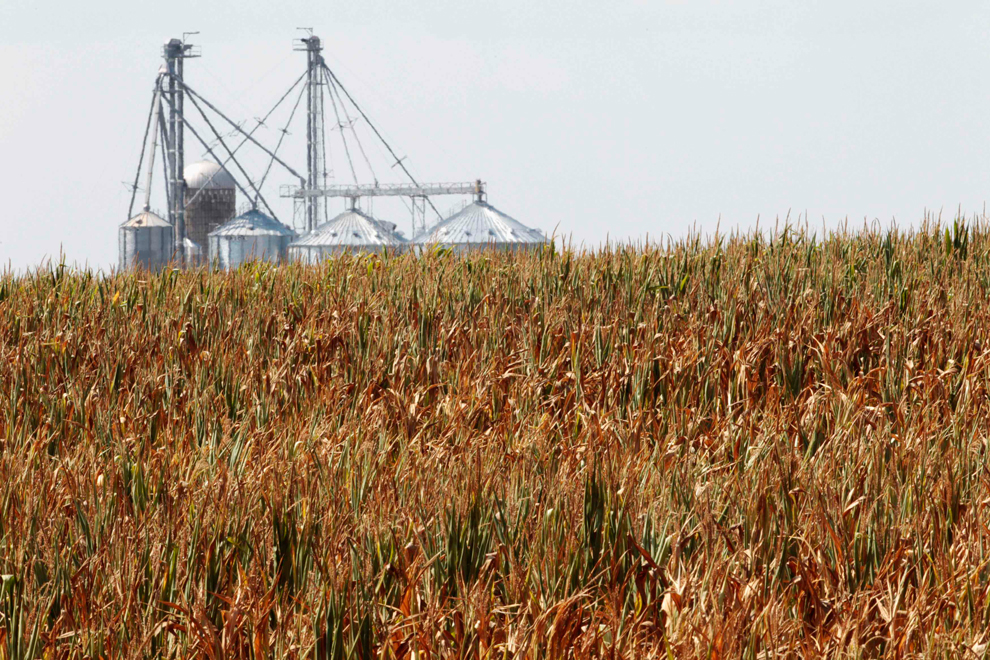 21
Corn plants in a drought-stricken farm field in Princeton, Indiana, July 18, 2012. Oppressive heat and a worsening drought in the U.S. Midwest pushed grain prices near or past records as crops wilted, cities baked and concerns grew about food and fuel price inflation. (John Sommers II/Reuters) # 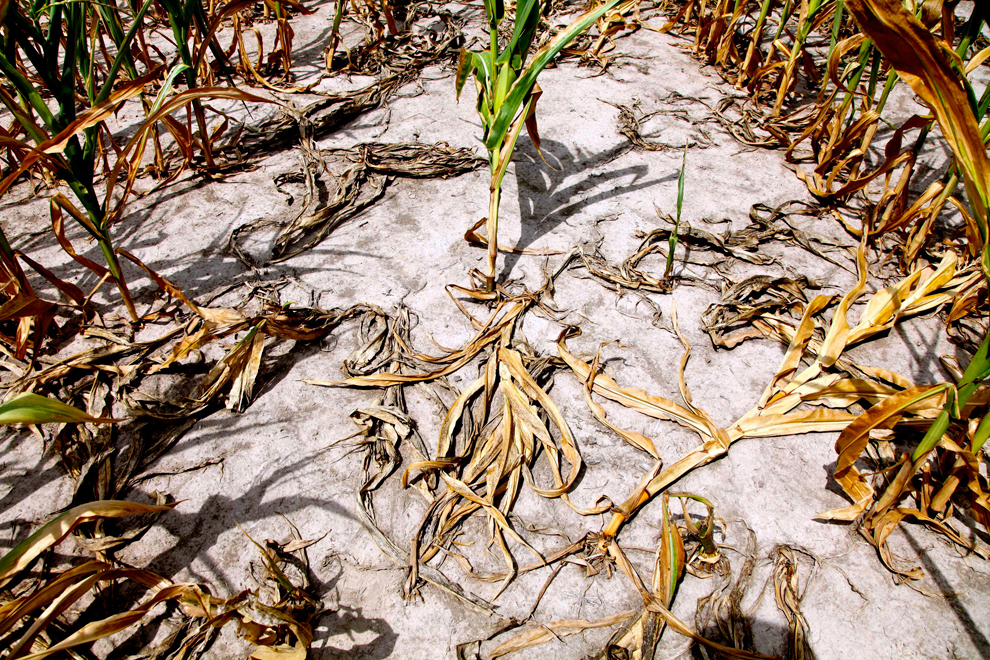 22
Corn stalks wilt and burn away at the base in dry soil after enduring weeks of extreme temperatures in Geff, Ill. In southern Illinois many farmers are filing a total loss for 2012 and hoping they survive until the next growing season. (Robert Ray/Associated Press) # 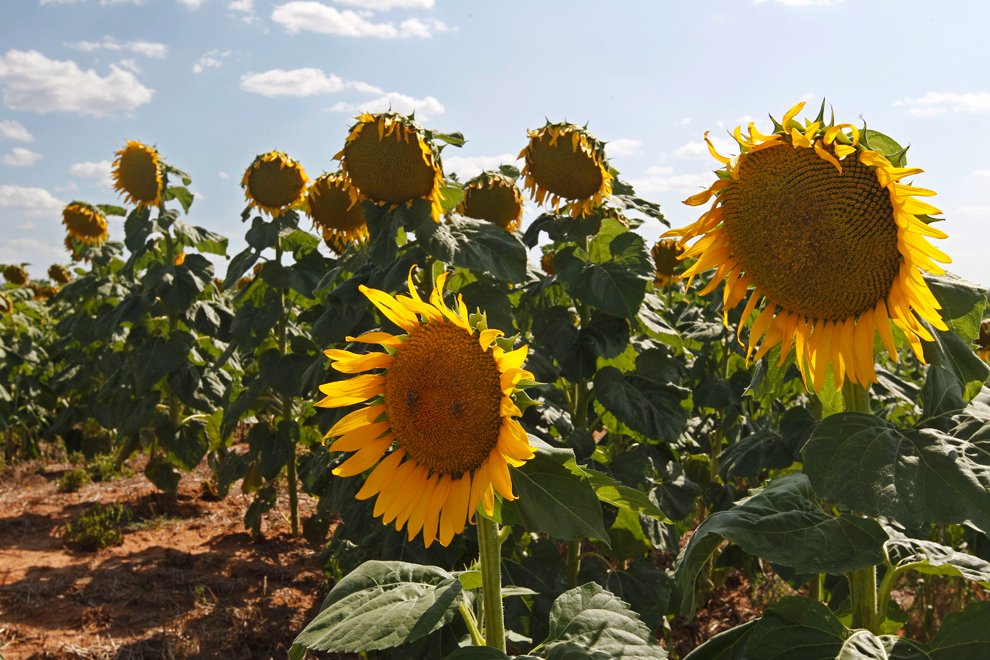 23
Sunflowers droop in the Oklahoma heat near Woodward, Okla., July 18, 2012. The nation's widest drought in decades is spreading, with more than half of the continental United States now in some stage of drought and most of the rest enduring abnormally dry conditions. (Sue Ogrocki/Associated Press) # 24
A field of corn affected by the recent drought near Paris, Missouri, July 13, 2012. Broiling, intense heat continues to blanket much of the U.S. Midwest, exacerbating an already chronic drought that is devastating corn, soy and other crops vital to the region's economy. (Adrees Latif/Reuters) #