Tornadoes Rip Through the Midwest and South

Weather predictions for possible tornadoes from a new storm system today threaten the Midwest and South, and have recent victims nervous about what the day might hold. The first powerful storm system tore through parts of the Midwest and South earlier this week, killing 13 people from Kansas to Kentucky, leaving pockets of devastation across several states and marking the acceleration of another deadly (and early) tornado season. Tornadoes and powerful winds tore off roofs, leveled homes and businesses, tossed mobile homes, downed power lines and injured more than 150 people. The damage was most significant in Harrisburg, a small town in southern Illinois where blocks of houses and businesses were reduced to rubble. -- Paula Nelson(25 photos total)

2
A woman surveys the destruction caused by a tornado in Harrisburg, Illinois, March 1, 2012. Powerful storms that spawned tornadoes ripped through the U.S. Midwest, killing at least 13 people, including six in Illinois who were crushed when a house was lifted up and fell on them, authorities said. (Jim Young/Reuters) # 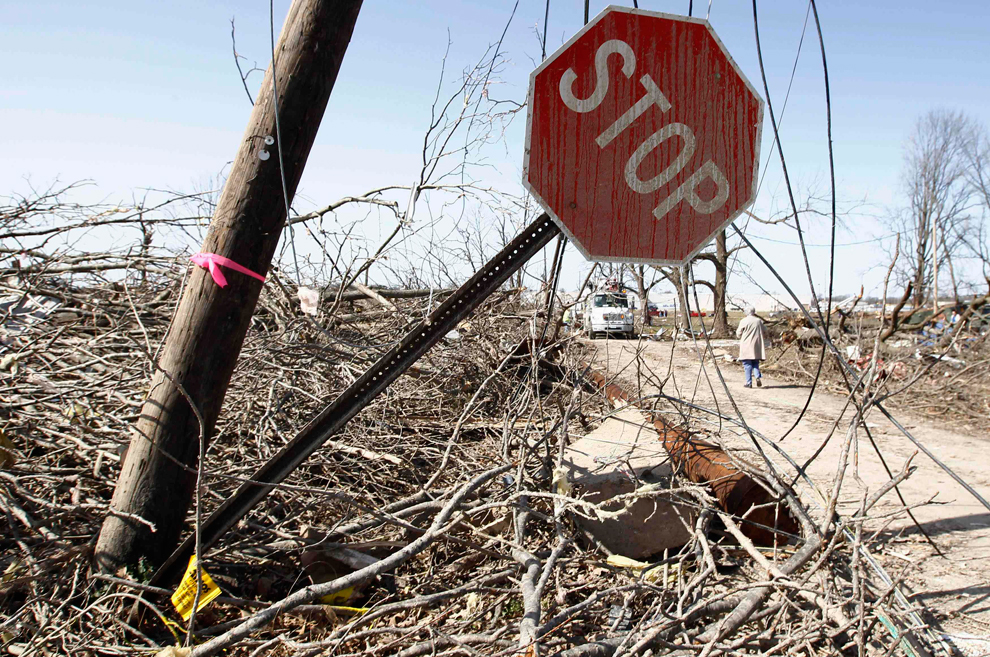 3
A woman walks down a road past the destruction caused by a tornado in Harrisburg, Illinois. (Jim Young/Reuters) # 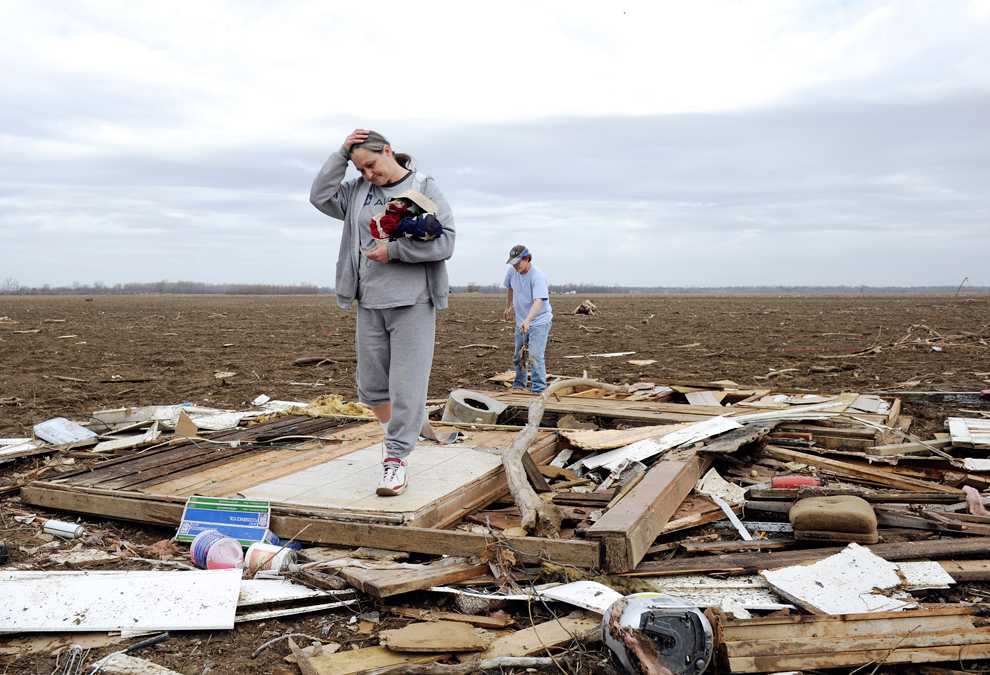 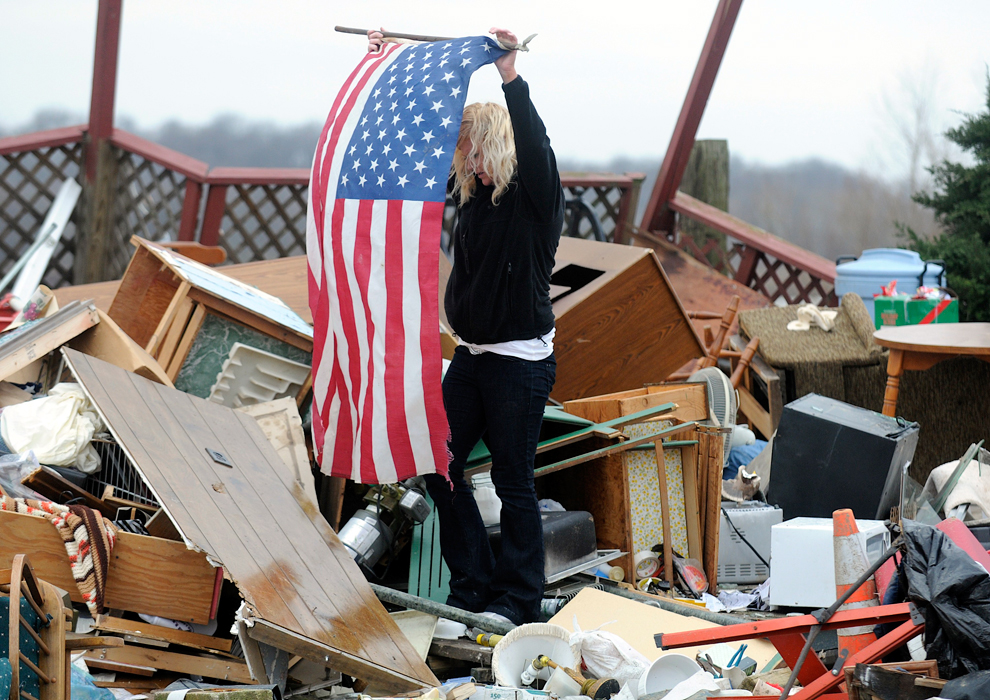 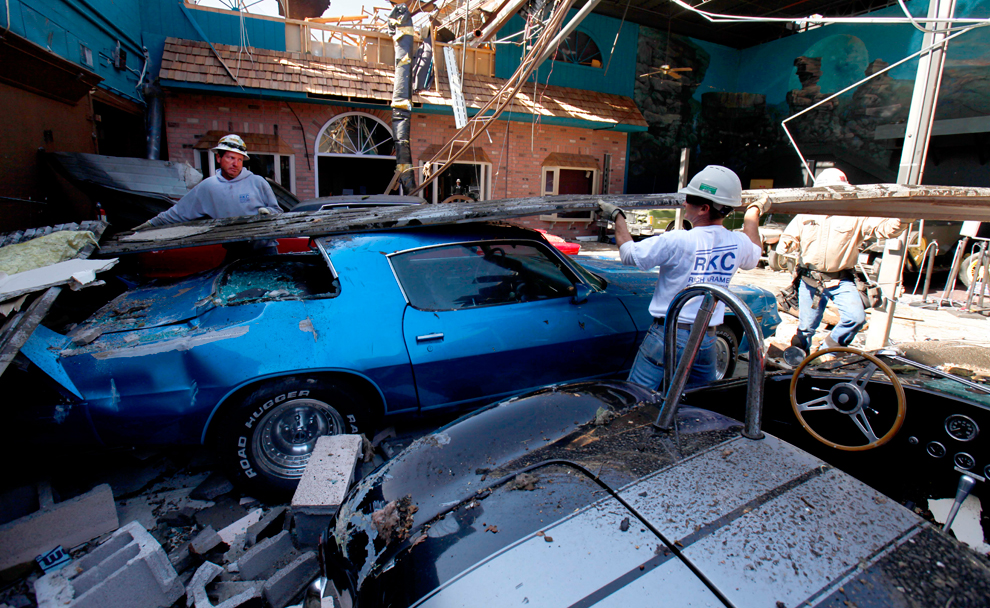 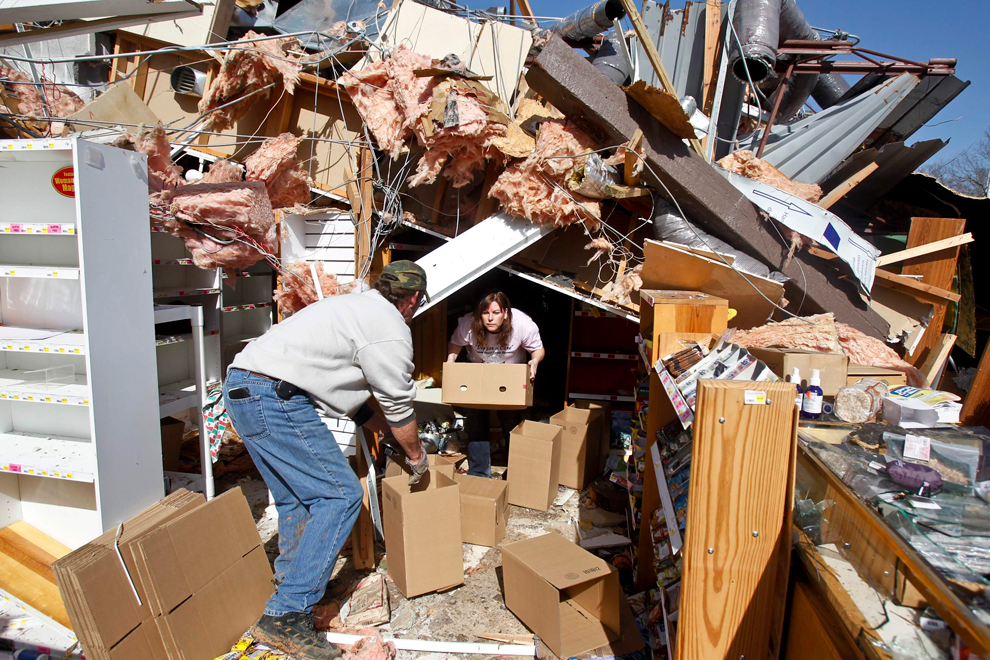 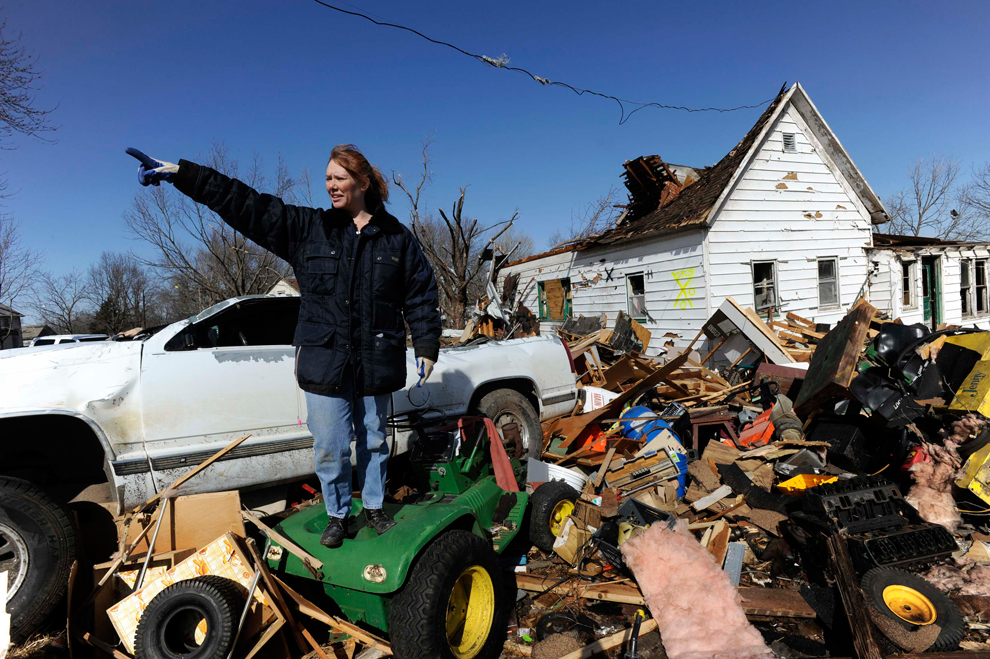 9
Diana Cantrell points in the direction of a tornado that destroyed her home as it appeared the night before in Harveyville, KS, Feb. 29, 2012. Suspected tornadoes killed 13 as powerful storms ripped through the Midwest, obliterating homes, churches and businesses across six states. (Dave Kaup/Reuters) # 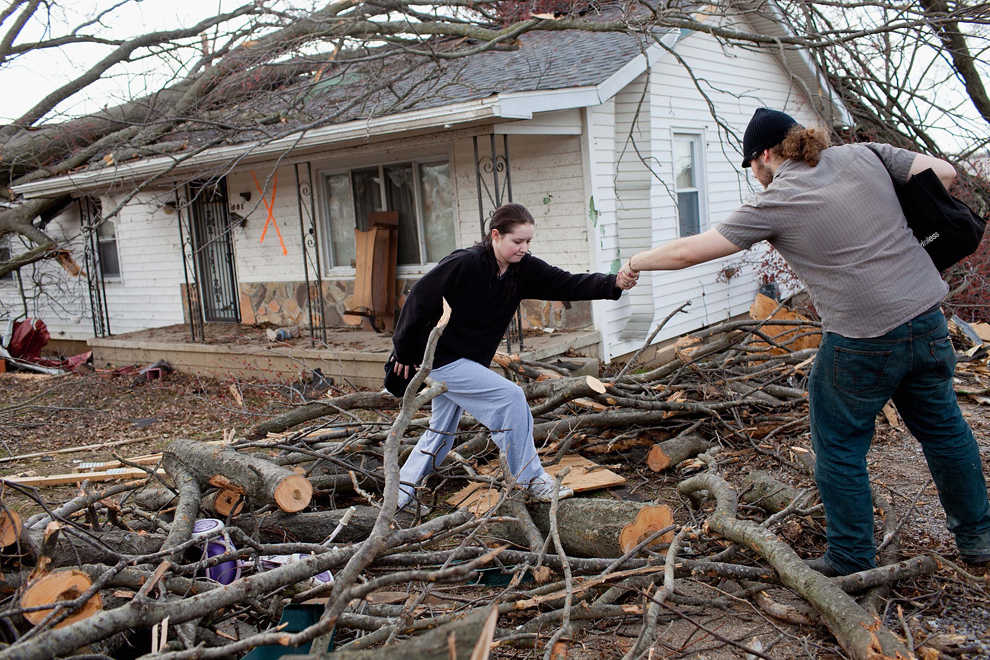 10
Levi Fogle helps his girlfriend, Sarah Pearce, climb over downed limbs as they leave their damaged house after a tornado touched down Feb. 29, 2012 in Harrisburg, Illinois. Fogle, Pearce and her three daughters survived the storm without injury. (Whitney Curtis/Getty Images) # 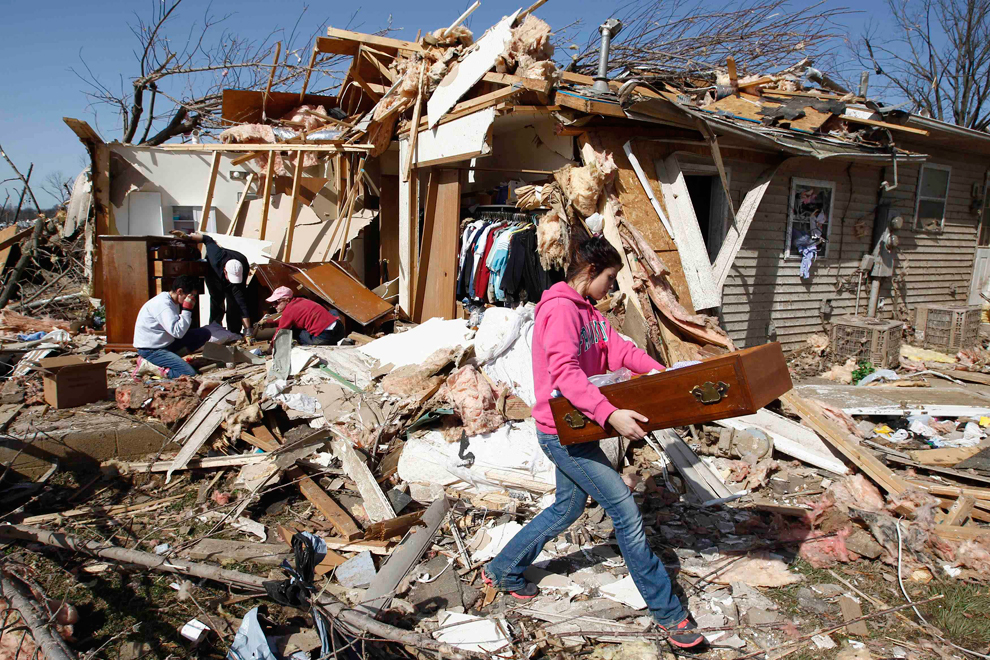 11
Jordan Youssef salvages a dresser drawer from the remains of her grandmother's house which was destroyed by a tornado in Harrisburg, IL, March 1, 2012. (Jim Young/Reuters) # 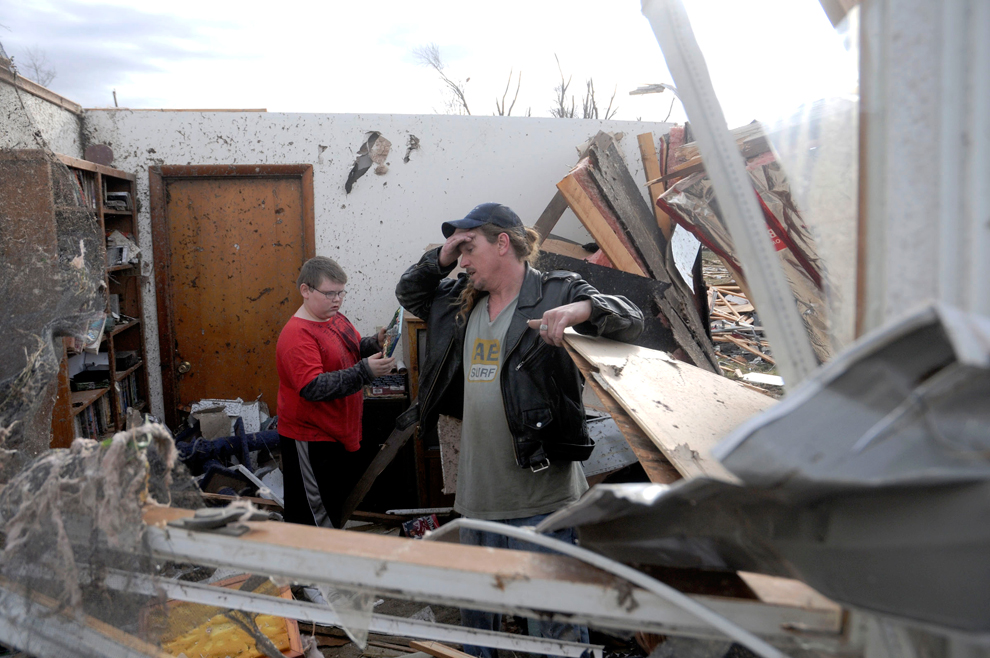 12
Gene Byrd pauses for a moment while he and his son, Devyn Byrd, 14, look over damage sustained to a friend's house after a severe storm hit in the early morning hours on Feb. 29, 2012, in Harrisrburg, IL. (Paul Newton/The Southern Illinoisan/Associated Press) # 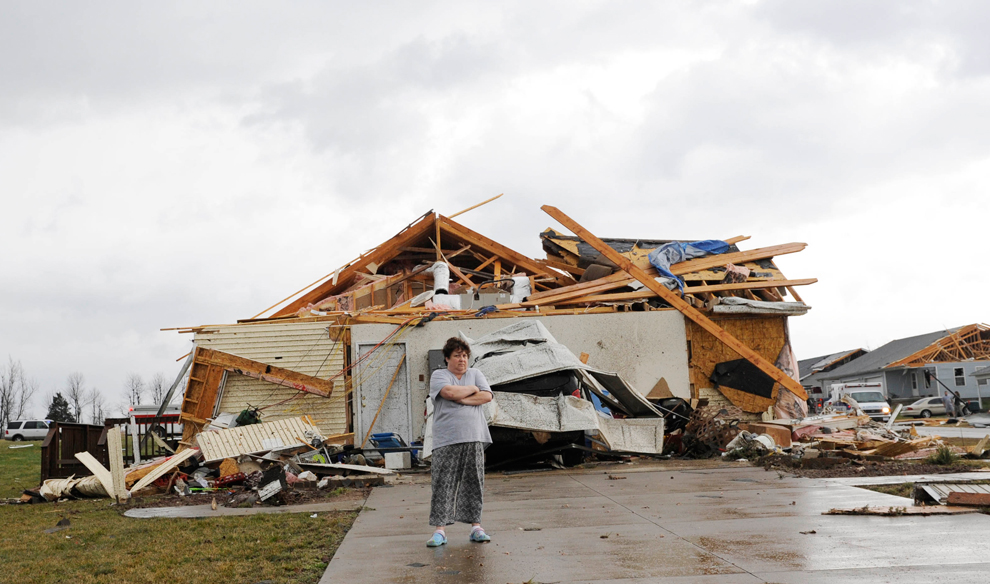 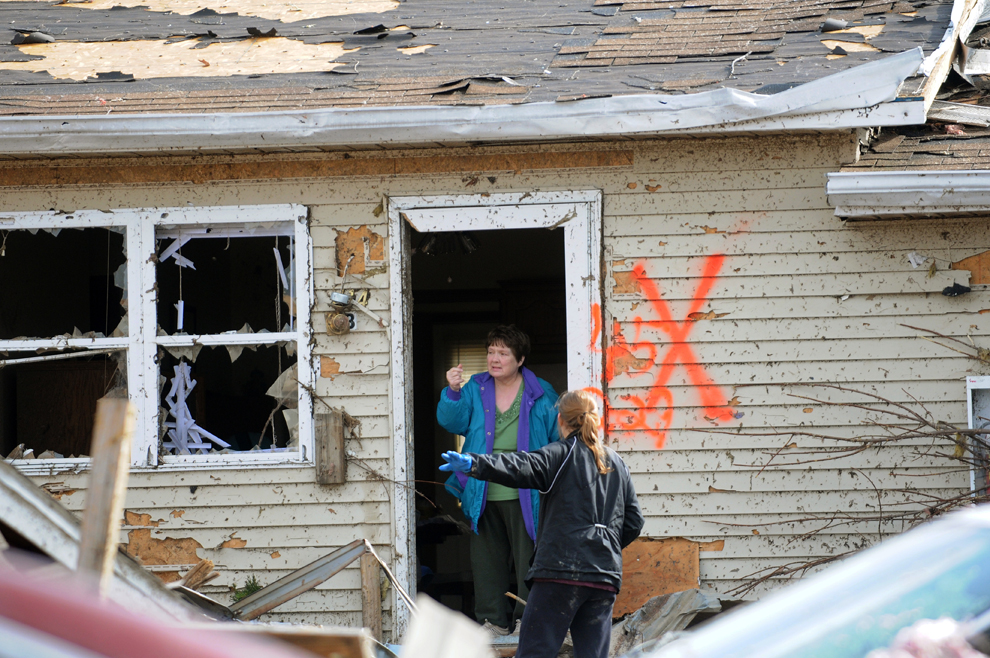 15
Margaret Shimkus, 61, talks with an emergency responder about her condition, Feb. 29, 2012, at her home in Harrisburg, IL, after an early morning tornado ripped through the town. Shimkus, who took refuge in her bathtub, sustained a minor cut from the early morning storm, but Dorothy Hill, a neighbor in a duplex home, was taken to a hospital with injuries. (Stephen Lance Dennee/Associated Press) # 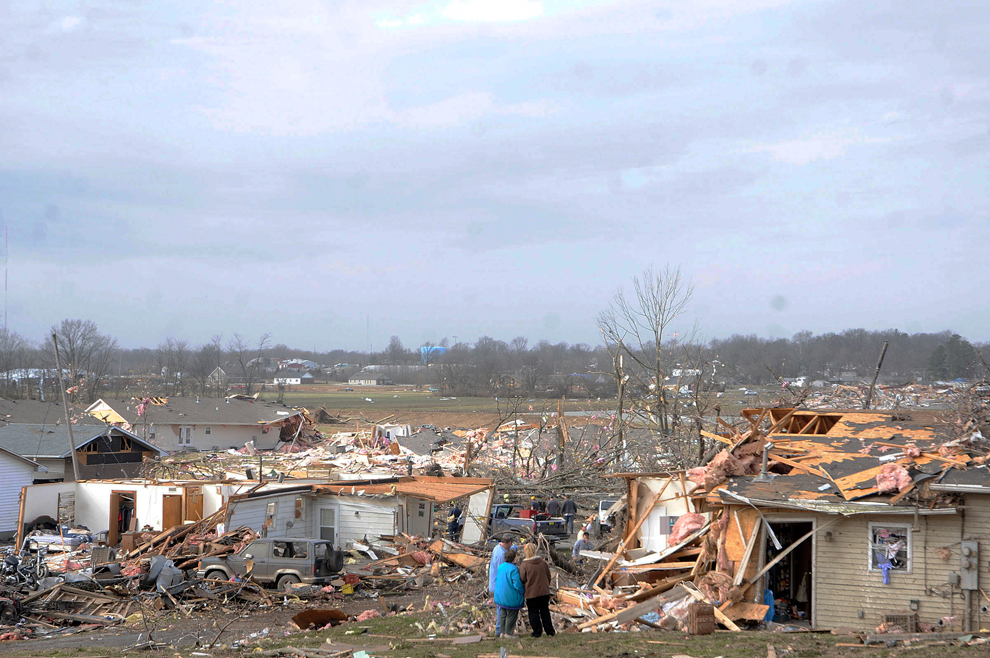 16
Residents survey the damage after a severe storm hit in the early morning hours on Feb. 29, 2012, in Harrisrbug. A severe pre-dawn storm pounded portions of southern Illinois. Several deaths were reported in Harrisburg and left the city's medical center scrambling to treat an influx of injured. (Paul Newton/The Southern Illinoisan/Associated Press) # 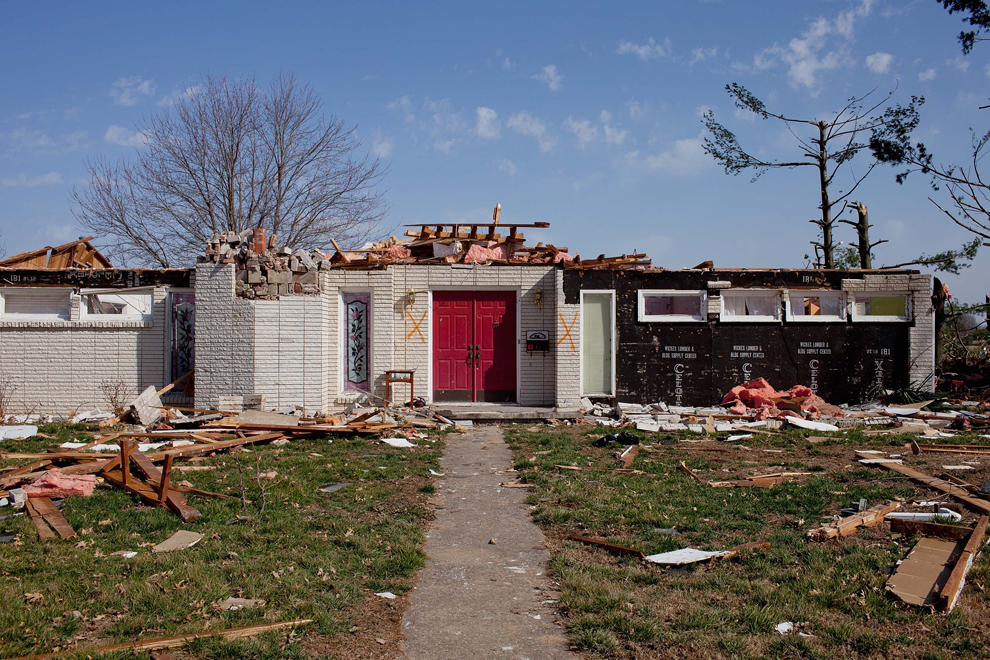 17
A house on Country Club Court sits damaged after a tornado touched down Feb. 29, 2012 in Harrisburg, IL. The death toll now stands at 13. (Whitney Curtis/Getty Images) #

18
Cathy Berry, of Topeka, rakes the front yard of a destroyed home after a tornado touched down Feb. 29, 2011 in Harveyville, KS. (Julie Denesha/Getty Images) # 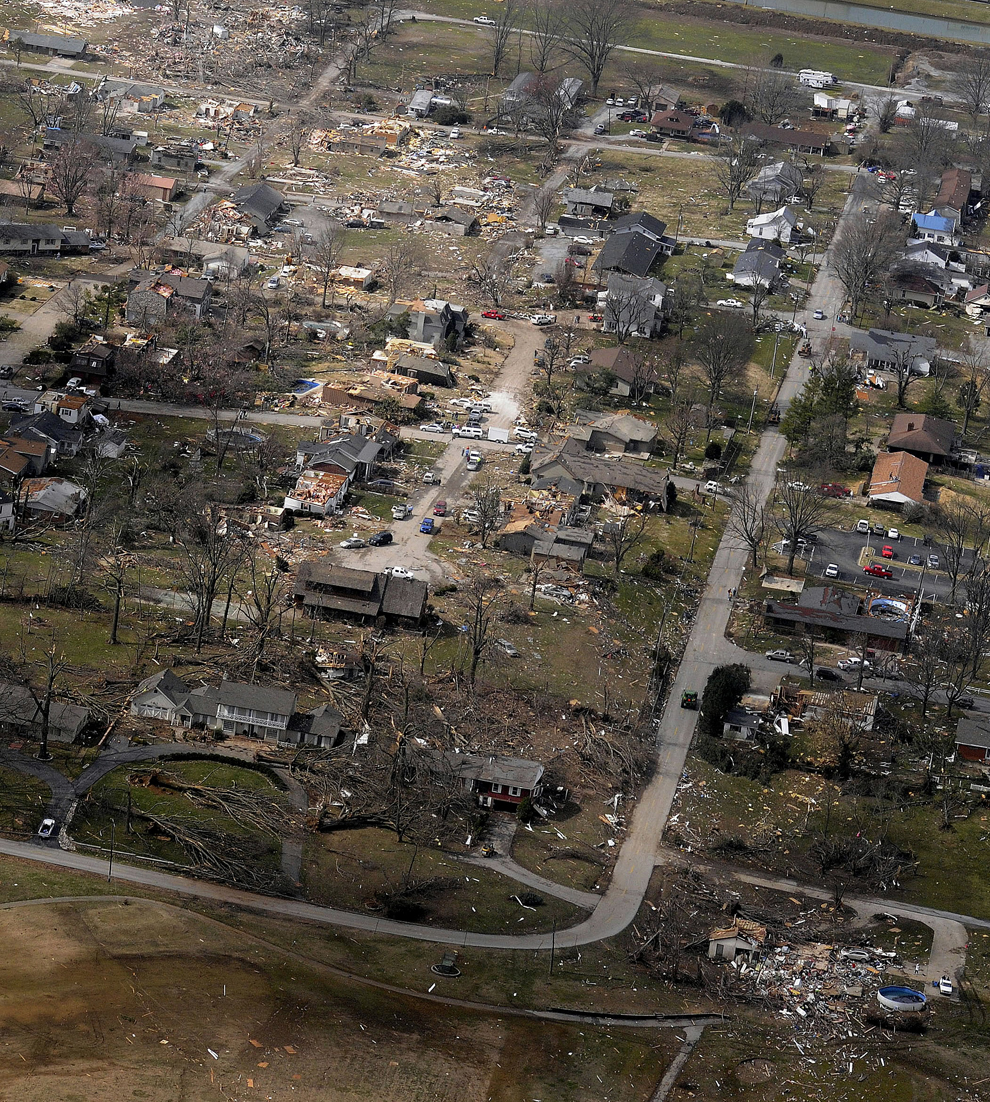 20
Another view of the damage near the corner of South Water and Birch Streets in Harrisburg, IL, Following a severe storm hit Wednesday, Feb. 29, 2012. (Steve Jahnke/The Southern/Associated Press) # 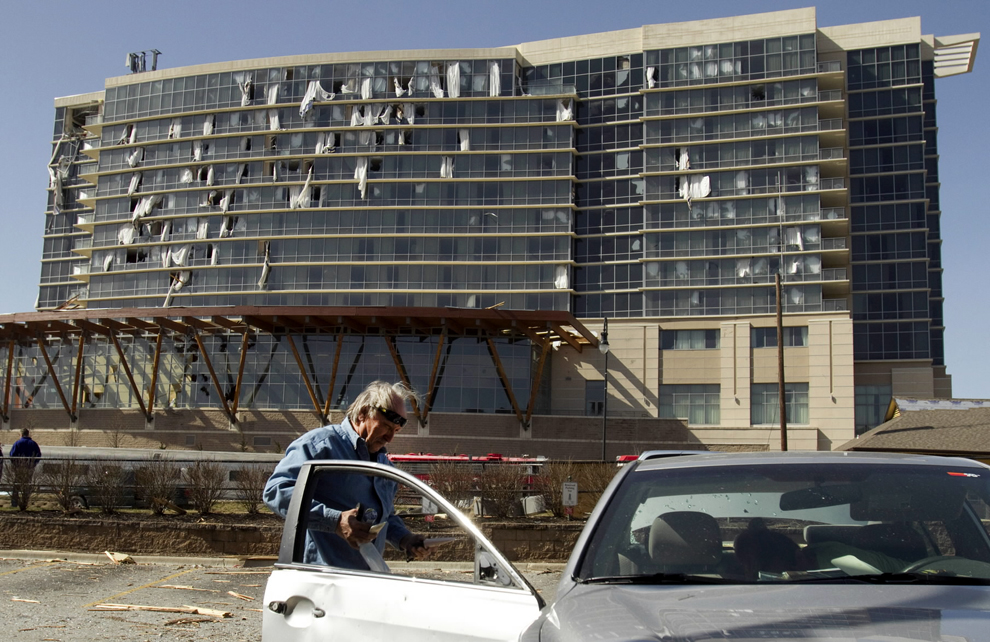 21
Mel Pulliam of Ridgedale, MO, helps his daughter collect belongings from her car that was damaged in the tornado that struck Branson, MO early Feb. 29, 2012. His daughter, Tracy Kimmel, was working at a restaurant on the Branson Landing when the storm hit. The Hilton Hotel (background) was heavily damaged by the tornado. (Todd Feeback/The Kansas City Star/Associated Press) # 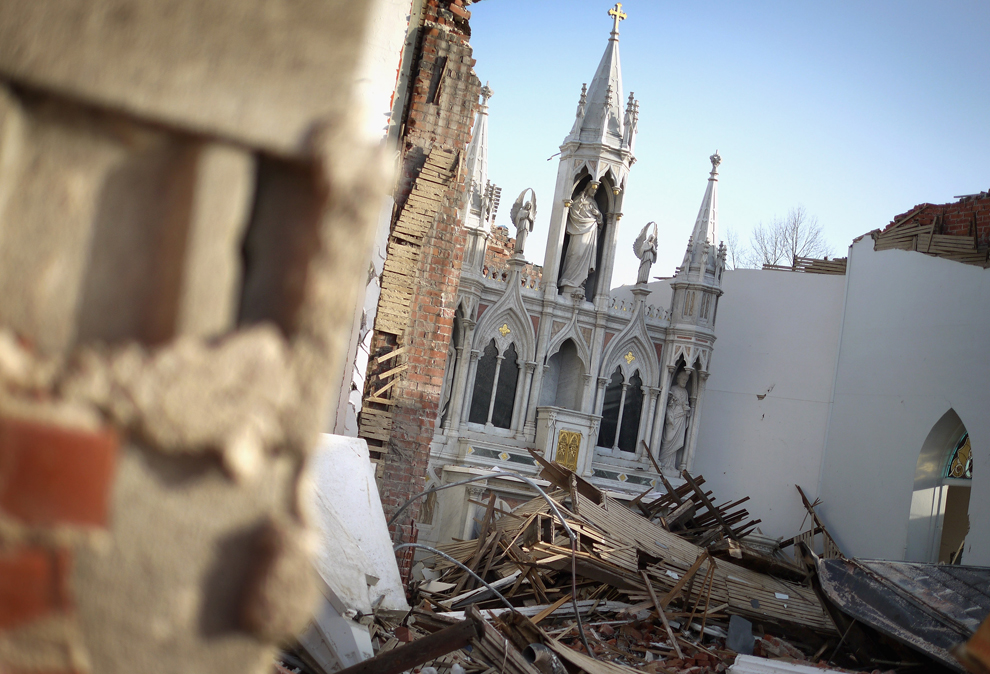 22
The stone alter sits in the debris of the tornado-damaged 110-year-old St. Joseph's Catholic Church on March 1, 2012 in Ridgeway, IL. According to reports, at least 13 people died as severe weather swept through the middle of the country. (Scott Olson/Getty Images) # 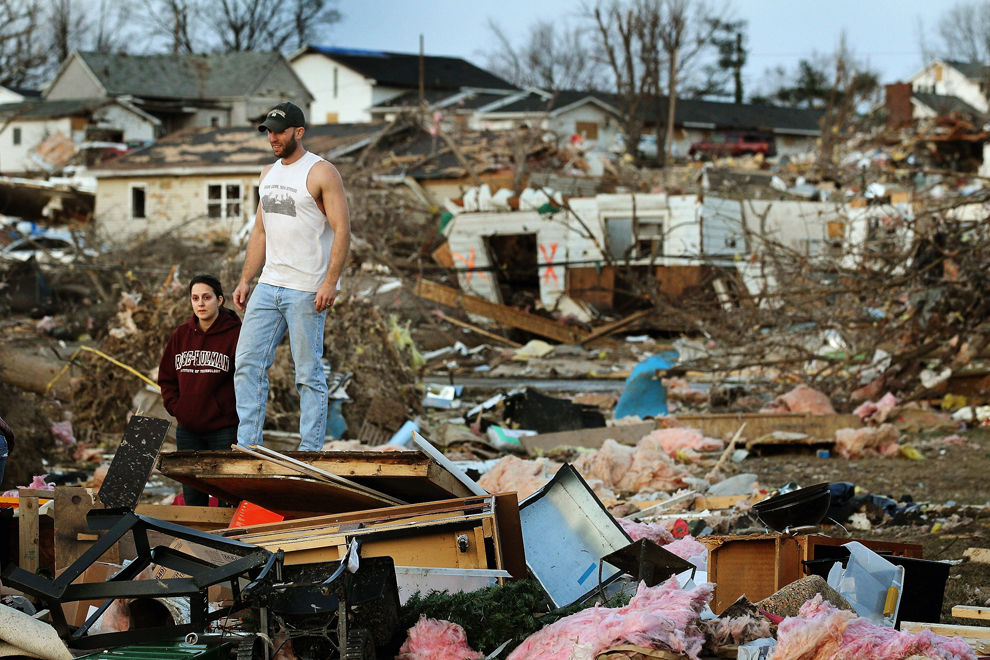 23
Josh Summers and his wife, Lindsey, search for their possessions after a tornado ripped through their neighborhood in the early morning hours of Feb. 29, 2012 in Harrisburg, IL. (Scott Olson/Getty Images) # 24
Julie Shaw picks up jewelry belonging to Dorothy Hill in Harrisburg, after an early morning tornado struck the small town in southern Illinois, Feb. 29, 2012. Hill was injured and taken to the hospital. (Stephen Lance Dennee/Associated Press) # 25
A prosthetic leg found among the debris caused by a tornado that ripped through Harrisburg, leans against a damaged home, Feb. 29, 2012. The tornado that blasted Harrisburg was an EF4, the second-highest rating given to twisters based on damage. Scientists said it was 200 yards wide with winds up to 170 mph. (Robert Ray/Associated Press) #