The Year in Pictures: Part I

Any "best of" list must surely be subjective. This one is no different. Choosing the best photographs of the year is an enormously difficult task, with many terrific photographs slipping through the cracks. But with major news events as a guide, and with single images I fell in love with throughout the year forcing their way into the edit, I look at my favorite pictures from the first four months of the year. Two main stories dominated headlines in the first part of the year: the Japan earthquake and tsunami, and the rising of the Arab Spring. The protests in the Middle East would spread to Greece, Spain, and eventually inspire the Occupy movement in Western nations. Other stories included a historic wave of tornados in the U.S., a Royal wedding in London, and the creation of the world's newest nation in South Sudan. Images from the rest of the year will follow in posts later this week. -- Lane Turner (36 photos total) 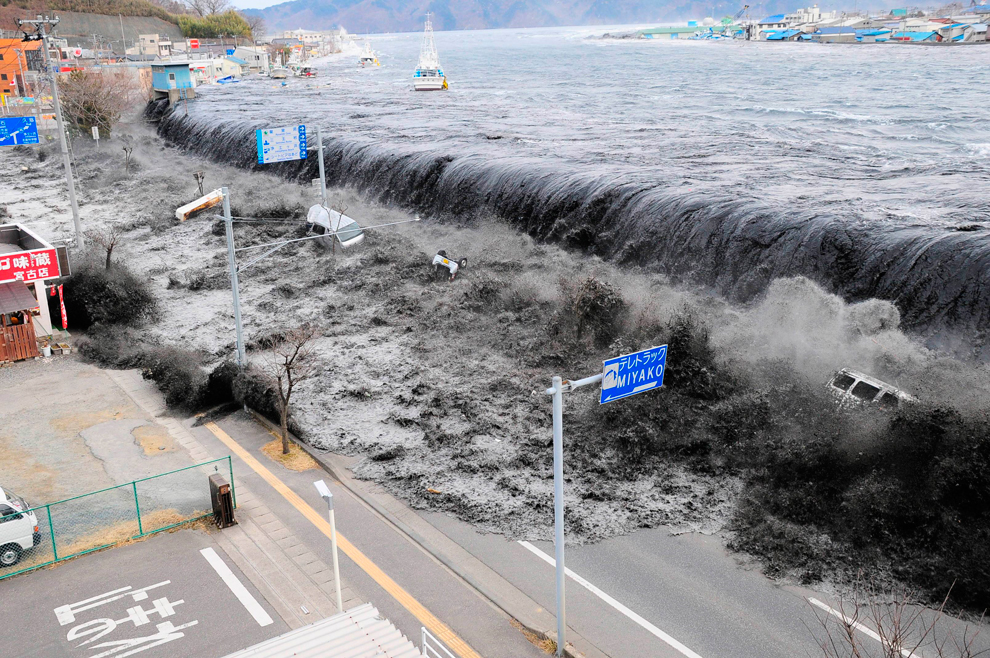 A wave caused by a tsunami flows into the city of Miyako from the Heigawa estuary in Iwate Prefecture after a magnitude 8.9 earthquake struck Japan March 11, 2011. (Mainichi Shimbun /Reuters)

2
A pleasure boat sits on top of a building amid a sea of debris in Otsuchi town in Iwate prefecture on March 14, 2011. (Yomiuri Shimbun/AFP/Getty Images) # 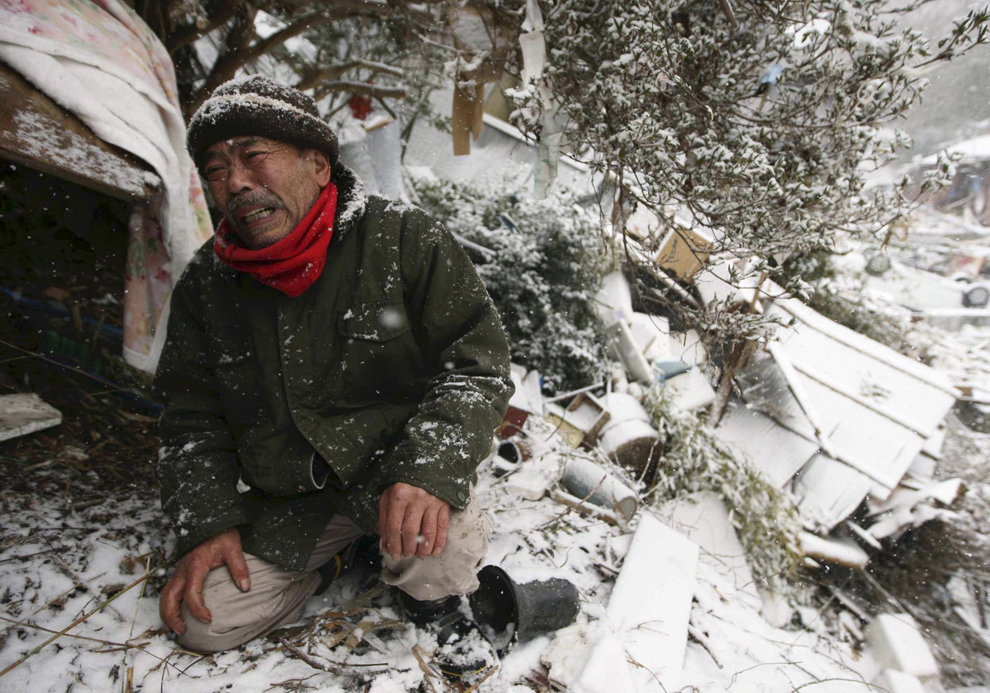 3
Sixty-six-year-old Yoshikatsu Hiratsuka cries in front of his collapsed house with a family member still missing, possibly buried in the rubble, at Onagawa town in Miyagi prefecture on March 17, 2011. (Yomiuri Shimbun/AFP/Getty Images) # 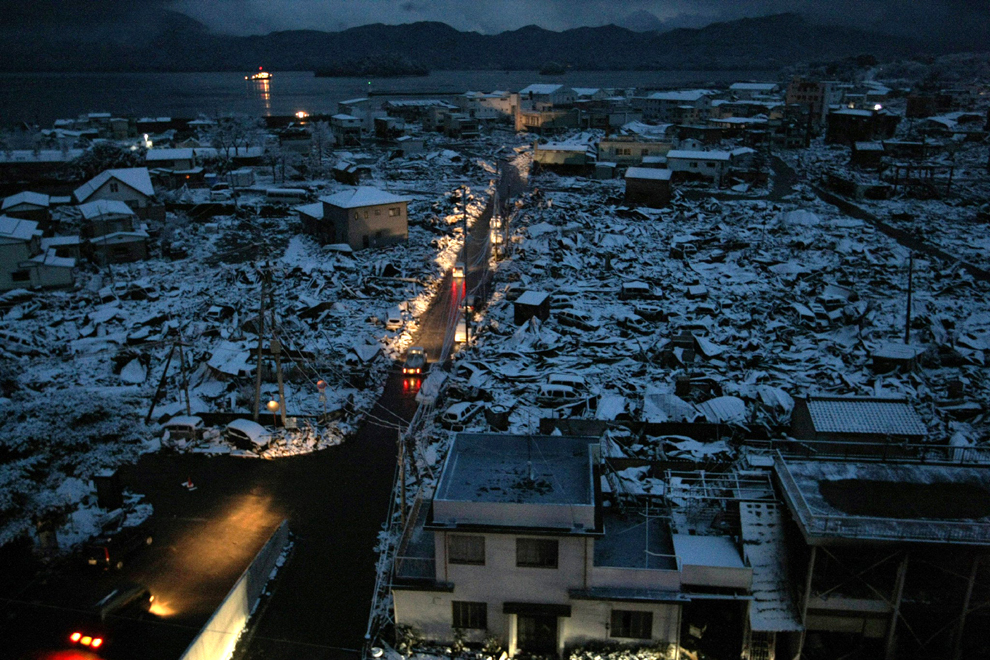 6
A protester holds a soldier's leg for safety as shots are fired in front of the headquarters of the Constitutional Democratic Rally party of ousted president Zine al-Abidine Ben Ali during a demonstration in downtown Tunis on January 20, 2011. (Zohra Bensemra /Reuters) # 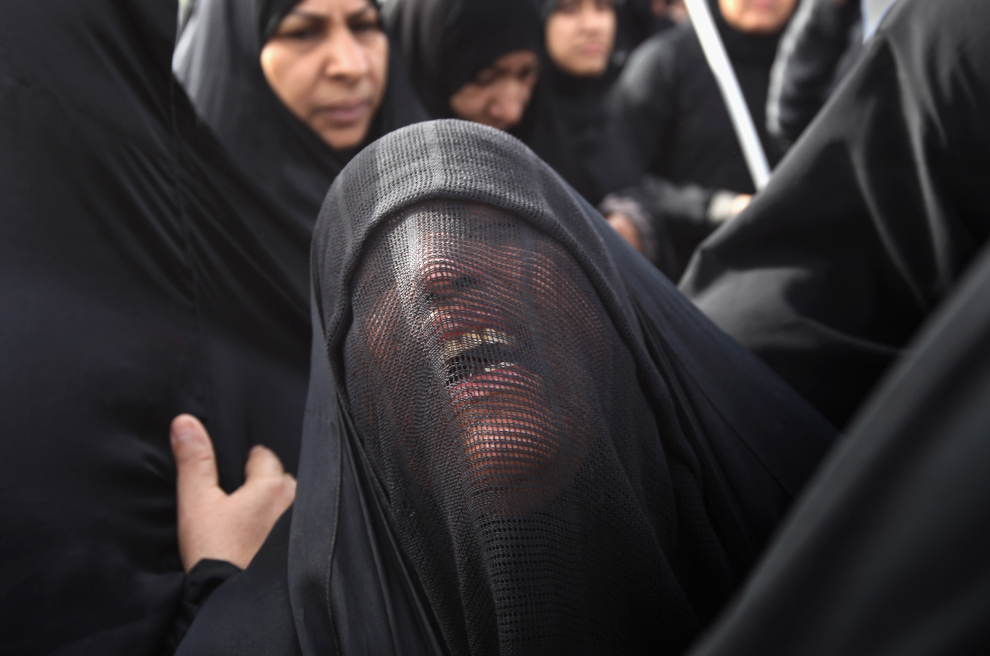 7
Family members grieve during the funeral procession of anti-government protester Abdul Ridha Mohammed on February 22, 2011 in Malkiya, Bahrain. He had been shot in the head when security forces attacked anti-government demonstrators. (John Moore/Getty Images) # 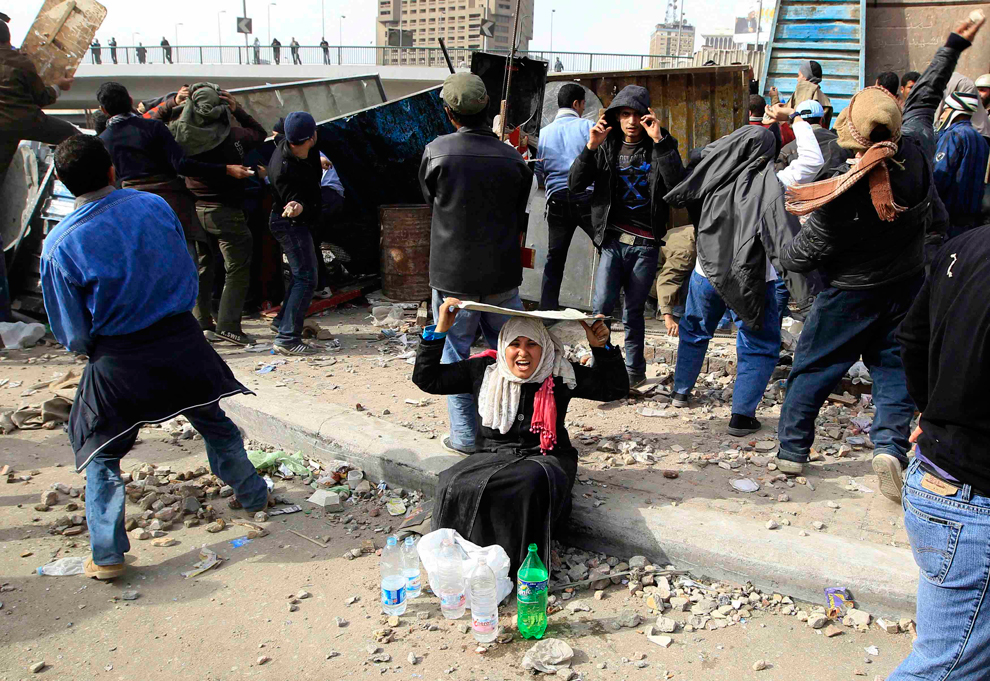 9
An opposition supporter takes shelter while providing water during riots with pro-Mubarak demonstrators near Tahrir Square in Cairo on February 3, 2011. (Goran Tomasevic/Reuters) #

11
A warplane of government forces crashes after being shot down over the outskirts of Benghazi in eastern Libya. (Anja Niedringhaus/AP) # 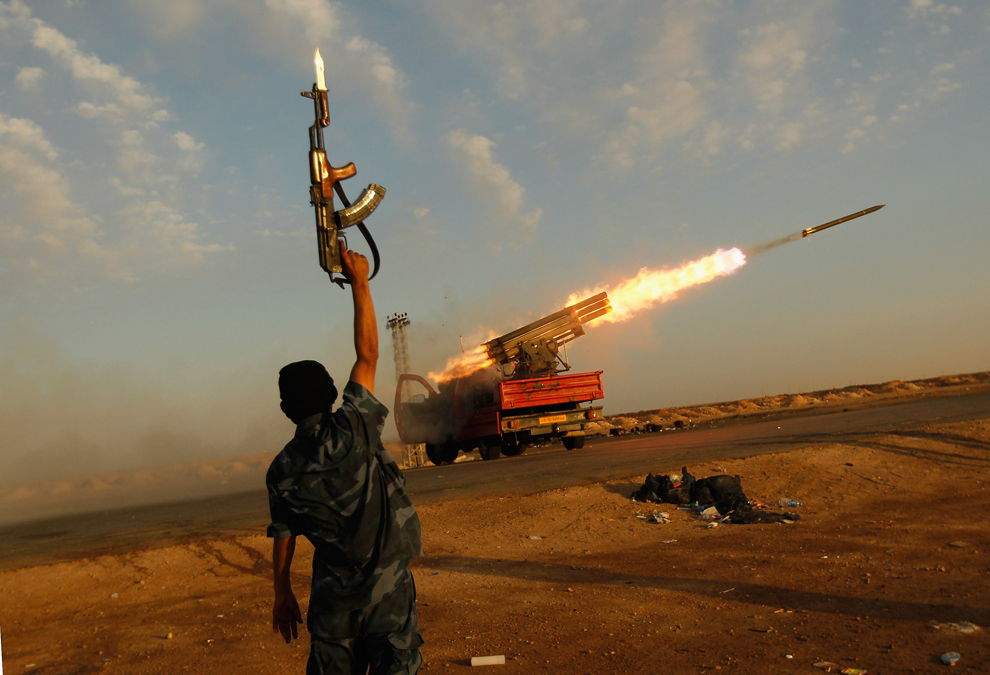 12
A rebel fighter celebrates as his comrades fire a rocket barrage toward the positions of government troops on April 14, 2011 west of Ajdabiyah, Libya. (Chris Hondros/Getty Images) #

13
Rebels hold a young man at gunpoint who they accuse of being a government loyalist, between the towns of Brega and Ras Lanuf in Libya on March 3, 2011. (Goran Tomasevic /Reuters) # 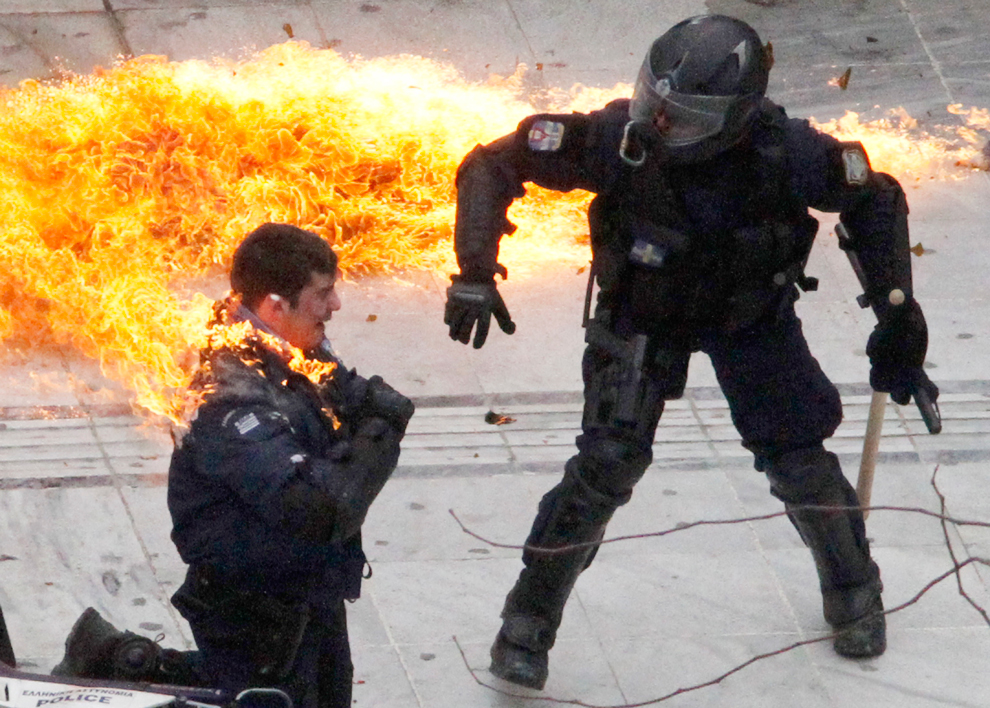 14
A motorcycle policeman burns as his colleague tries to help him after protesters threw a petrol bomb in Athens on February 23, 2011. Scores of youths hurled rocks and petrol bombs at riot police after clashes broke out during a general strike. (Dimitri Messinis/AP) # 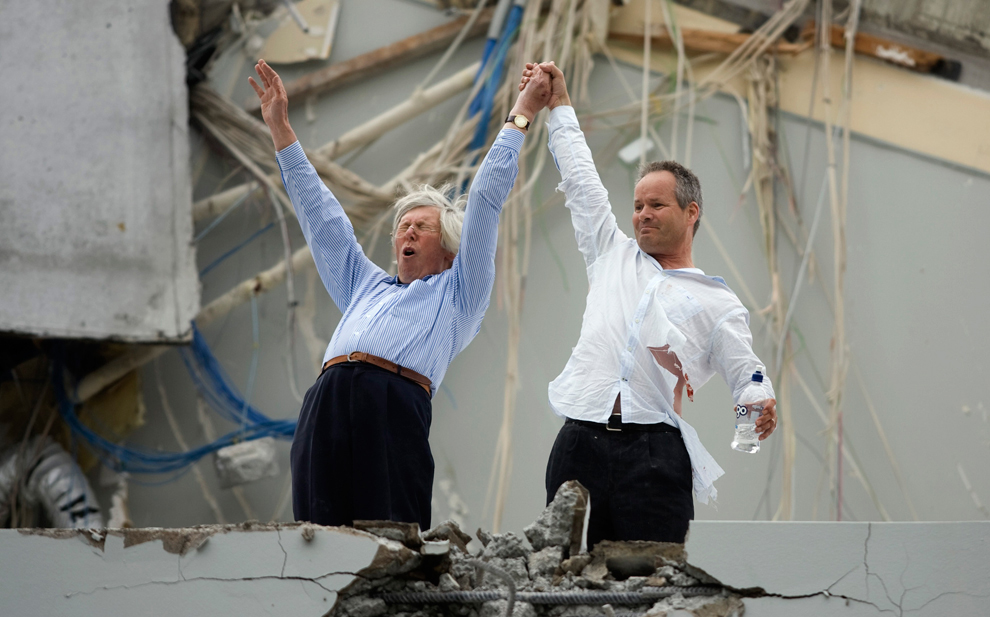 15
Two men celebrate after being pulled out from a destroyed building in Christchurch, New Zealand on February 22, 2011, 24 hours after a massive earthquake struck. (John Kirk-Anderson/Christchurch Press/Reuters) # 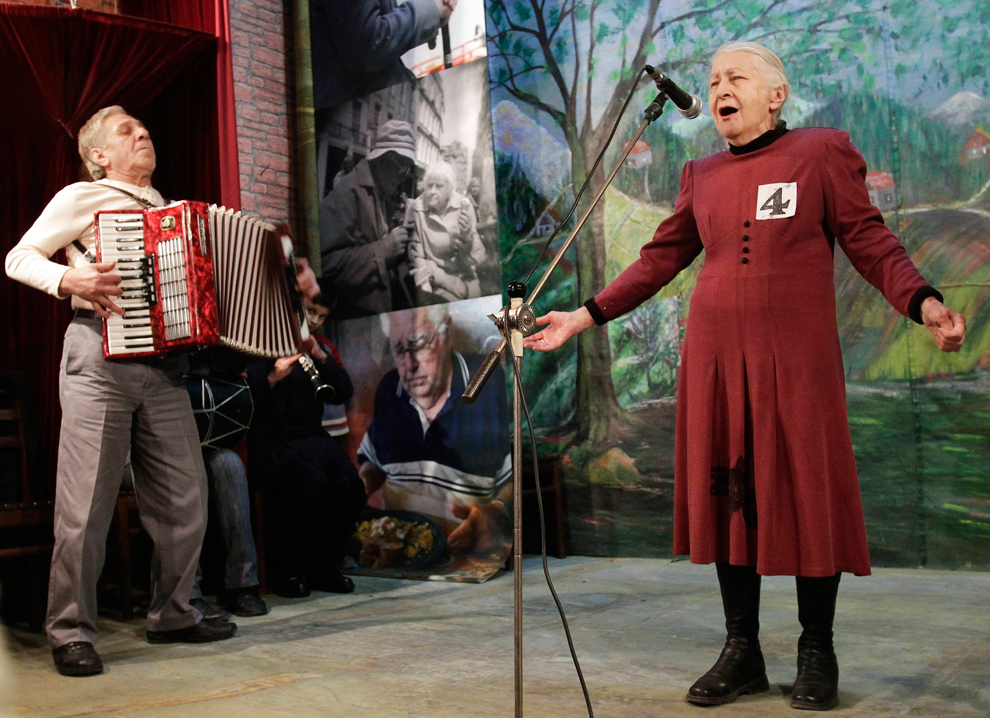 16
Tsiuri Kakabadze, 80, performs during the "Super Grandmother and Super Grandfather" contest in Tbilisi on January 5, 2011. Twenty-four participants aged over 70 from all over Georgia competed. (David Mdzinarishvili /Reuters) # 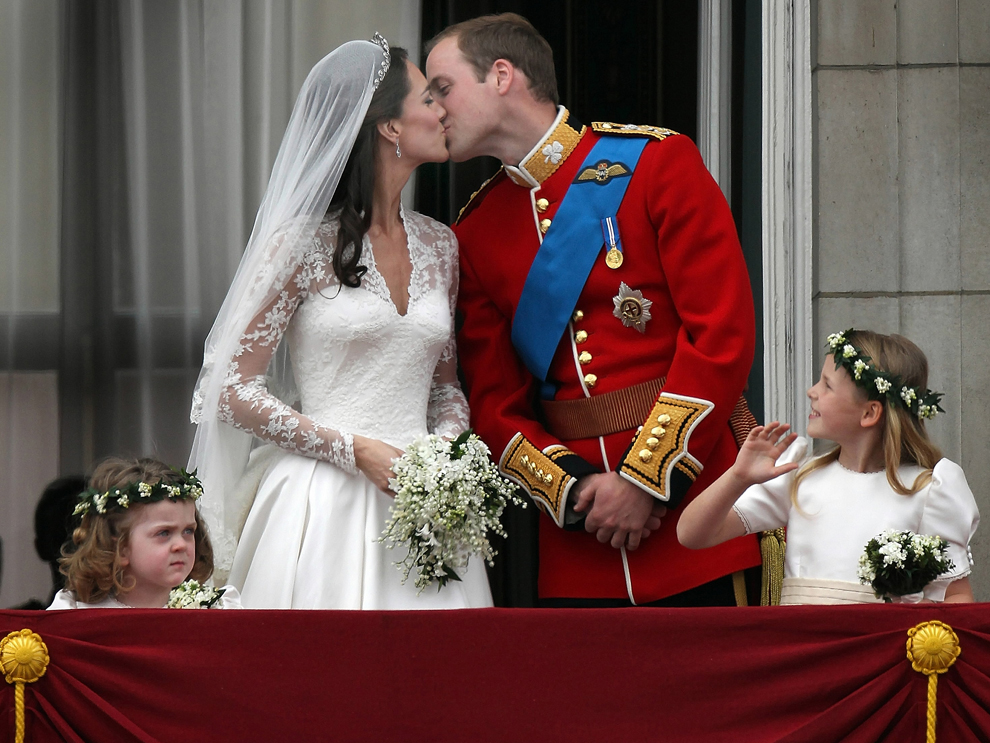 17
Prince William, Duke of Cambridge and Catherine, Duchess of Cambridge, kiss as Bridesmaids Grace Van Cutsem and Margarita Armstrong-Jones look on from the balcony at Buckingham Palace in London after the Royal wedding April 29, 2011. (Peter Macdiarmid/Getty Images) #

18
After a tornado struck, Faye Hyde sits on a mattress in what was her yard as she comforts her granddaughter Sierra Goldsmith, 2, in Conord Ala. (Jeff Roberts/The Birmingham News/AP) # 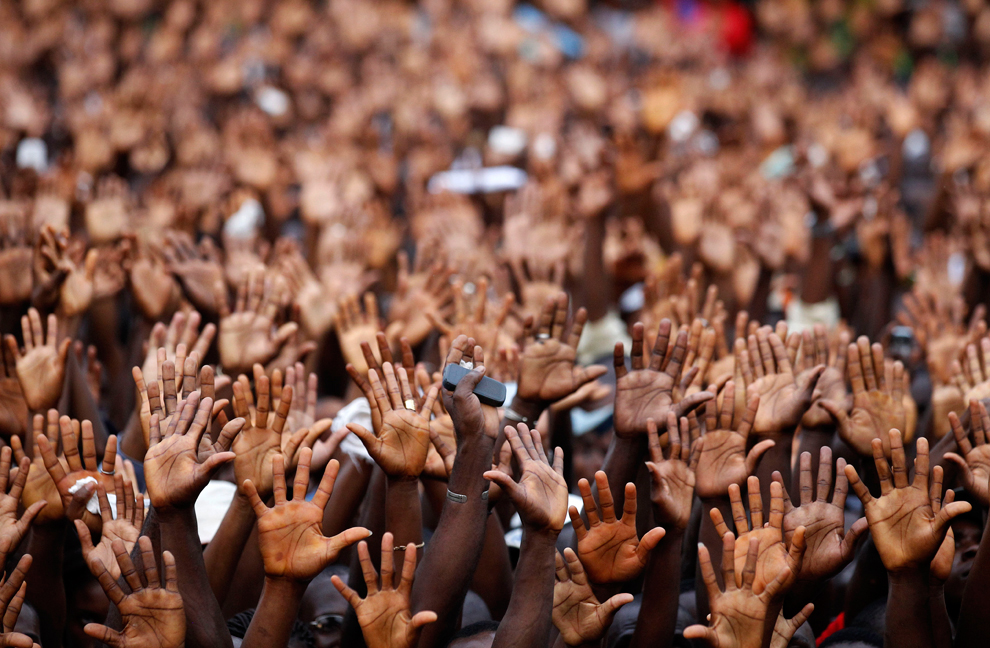 20
Supporters of incumbent President Laurent Gbagbo raise their hands in a show of support at a rally in the Yopougon district of Abidjan, Ivory Coast on January 9, 2011. Gbagbo refused to recognize the results of a long-delayed election that he lost, and a long period of conflict ensued before he was removed from office. (Rebecca Blackwell/AP) # 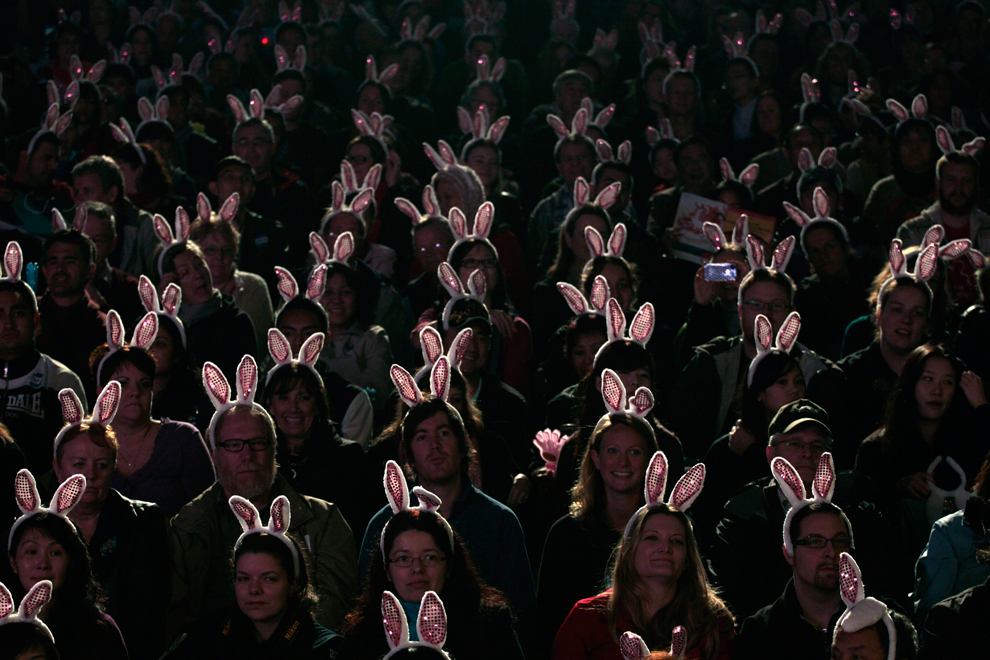 22
Cambodian displaced people receive government aid at their shelter in a Buddhist pagoda after fleeing their villages near the 11th-century Preah Vihear temple on the border between Thailand and Cambodia on February 9, 2011. Thailand and Cambodia waged an armed standoff surrounding the 900-year-old temple, causing villagers to flee. (Damir Sagolj/Reuters) # 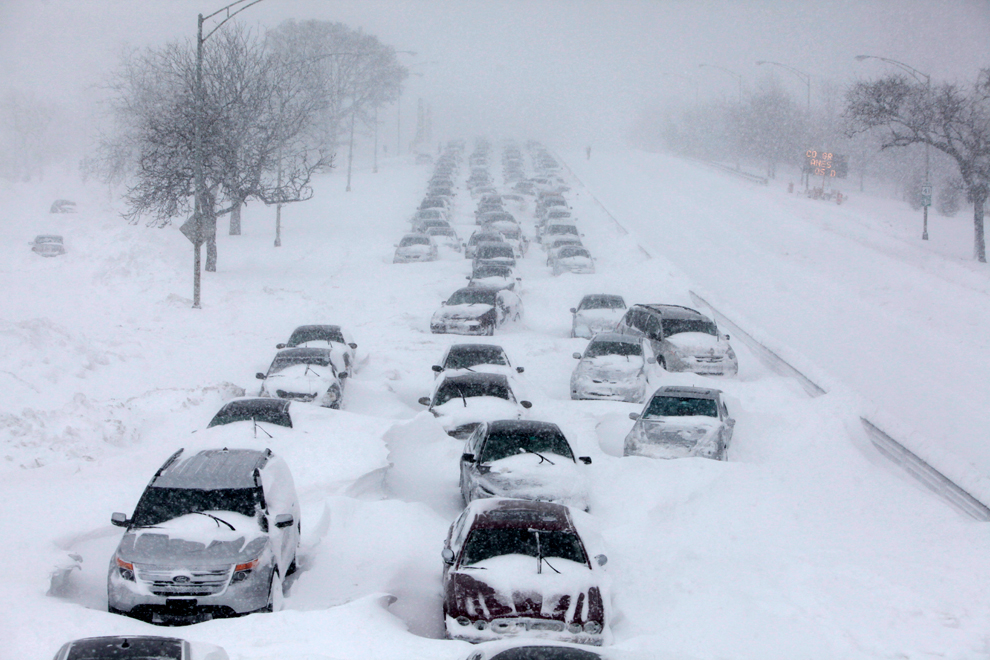 23
Hundreds of cars were abandoned on Lake Shore Drive in Chicago after a winter blizzard of historic proportions wobbled an otherwise snow-tough Chicago, stranding drivers for up to 12 hours overnight on February 2, 2011. (Kiichiro Sato/AP) # 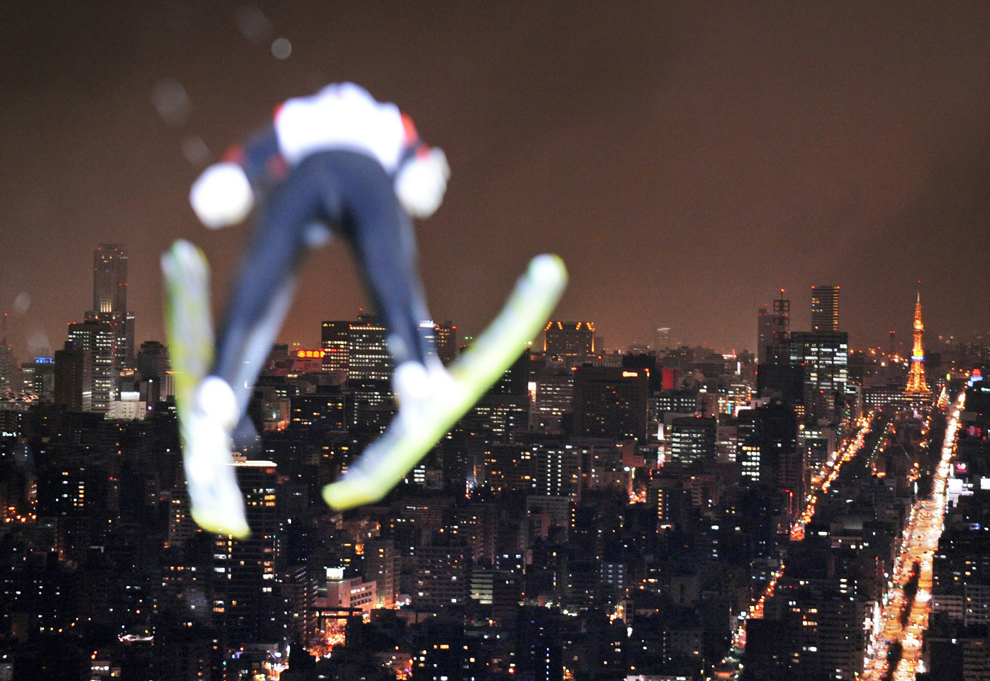 24
A skier jumps before the Sapporo skyline during an official training session of the World Cup ski jumping competition at Okurayama Hill on January 14, 2011. (Kazuhiro Nogi/AFP/Getty Images) # 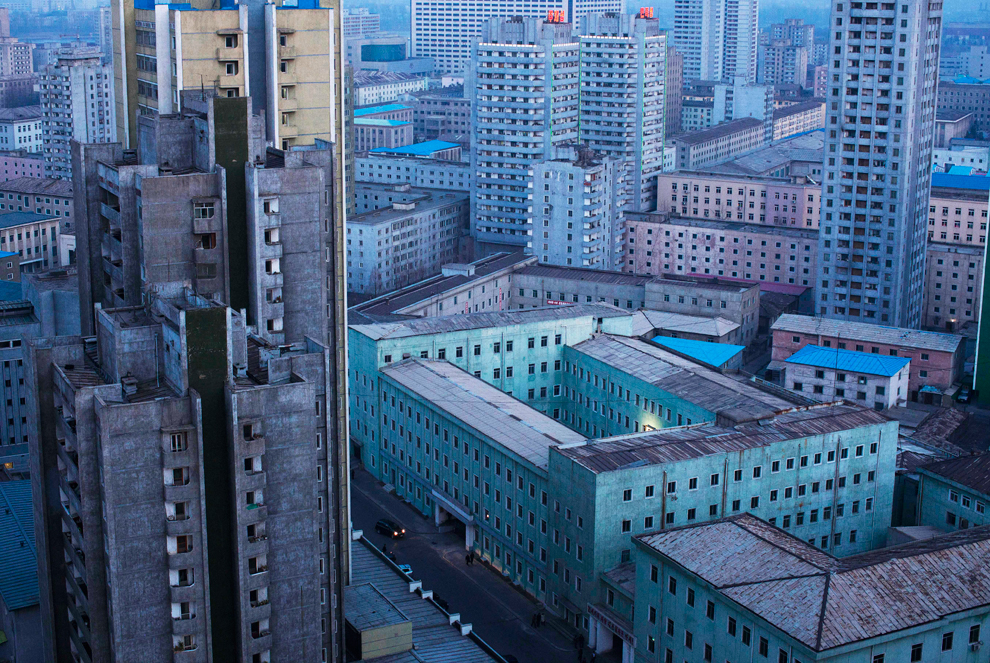 25
Associated Press photographer David Guttenfelder was given unprecedented access to North Korea, and gave many people their first look at the reclusive country, including a Pyongyang skyline view on April 12, 2011. (David Guttenfelder/AP) #

26
A float from the Beija Flor samba school parades through the Sambadrome during carnival celebrations in Rio de Janeiro on March 8, 2011. (Felipe Dana/AP) # 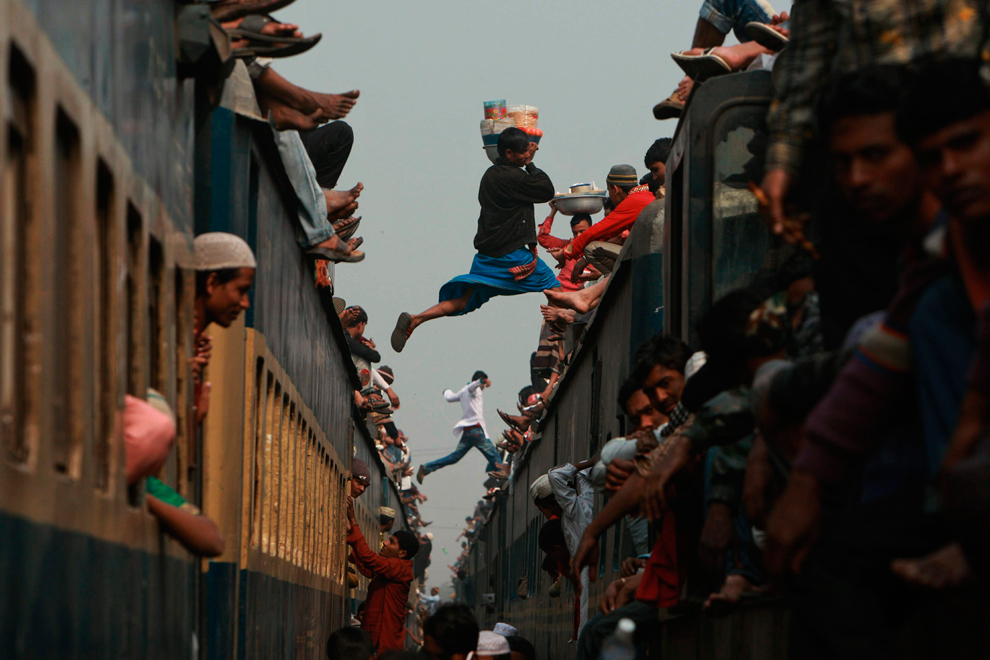 27
A vendor jumps from the top of one overcrowded train to another on January 23, 2011 as thousands of Muslims return home after attending the three-day Islamic Congregation on the banks of the River Turag in Tongi, Bangladesh. The congregation, held each year since 1966, is among the world's largest religious gatherings. (Pavel Rahman/AP) # 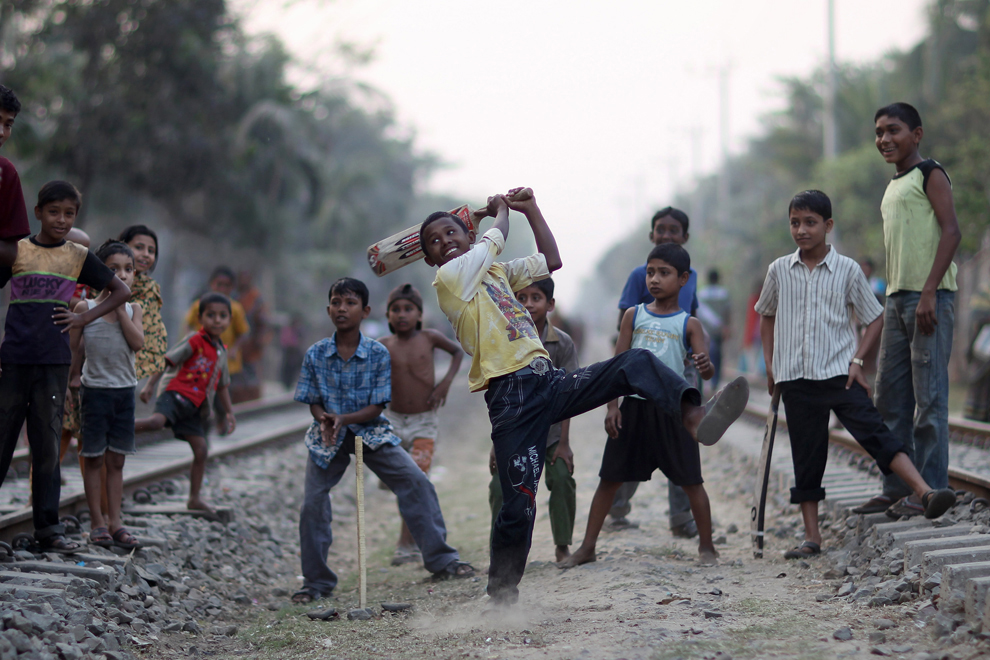 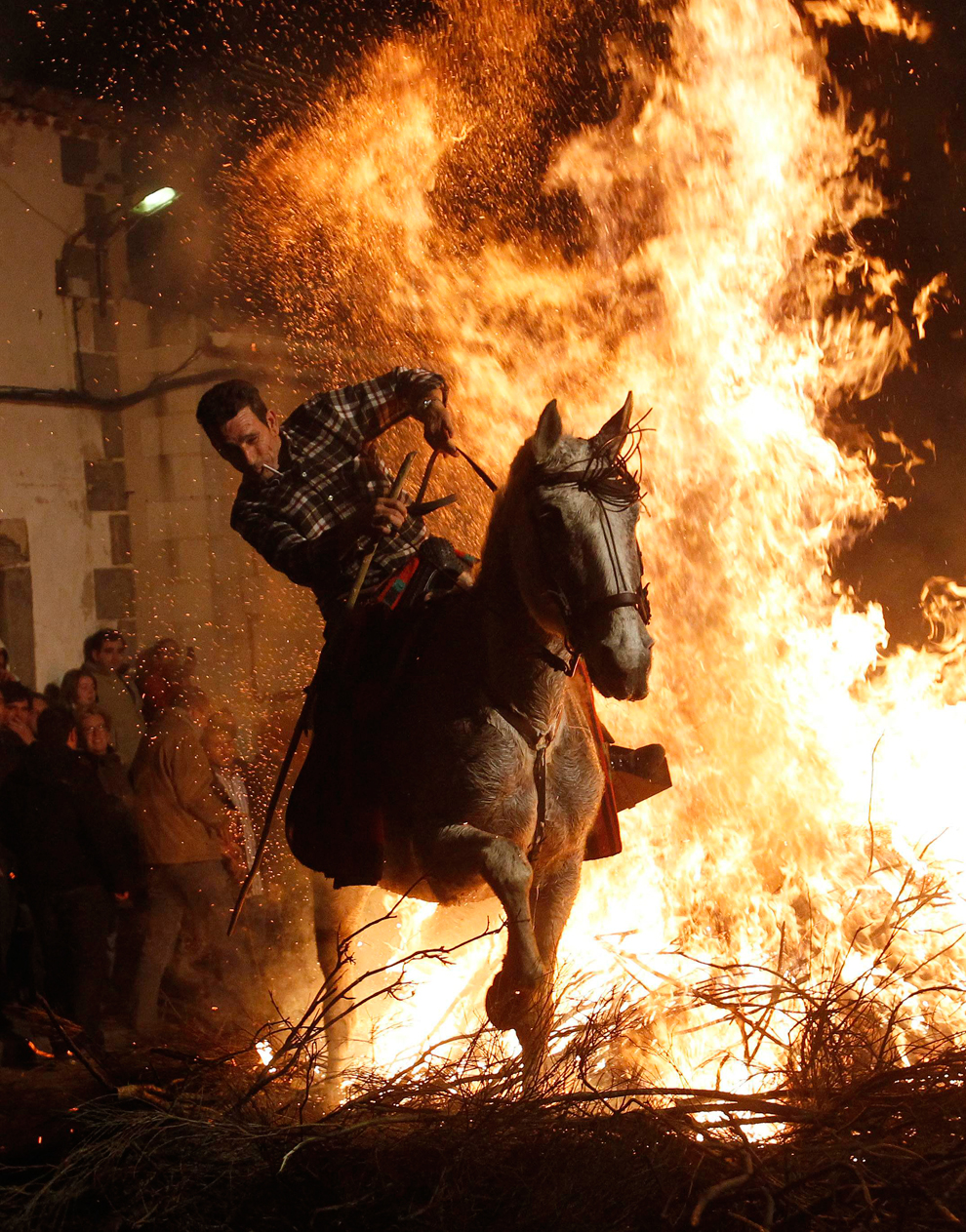 29
A man rides his horse through flames during the "Luminarias" religious celebration on the eve of Saint Anthony's Day in the village of San Bartolome de los Pinares, Spain on January 16, 2011. According to tradition people from the area ride their horses through the fire to purify the animals. (Andrea Comas /Reuters) #

30
Homeless people warm themselves by a fire in the old quarters of Delhi on January 13, 2011. According to local media reports there are over 67,000 homeless in Delhi, of whom 15 percent are women and 10 percent children. (Adnan Abidi/Reuters) # 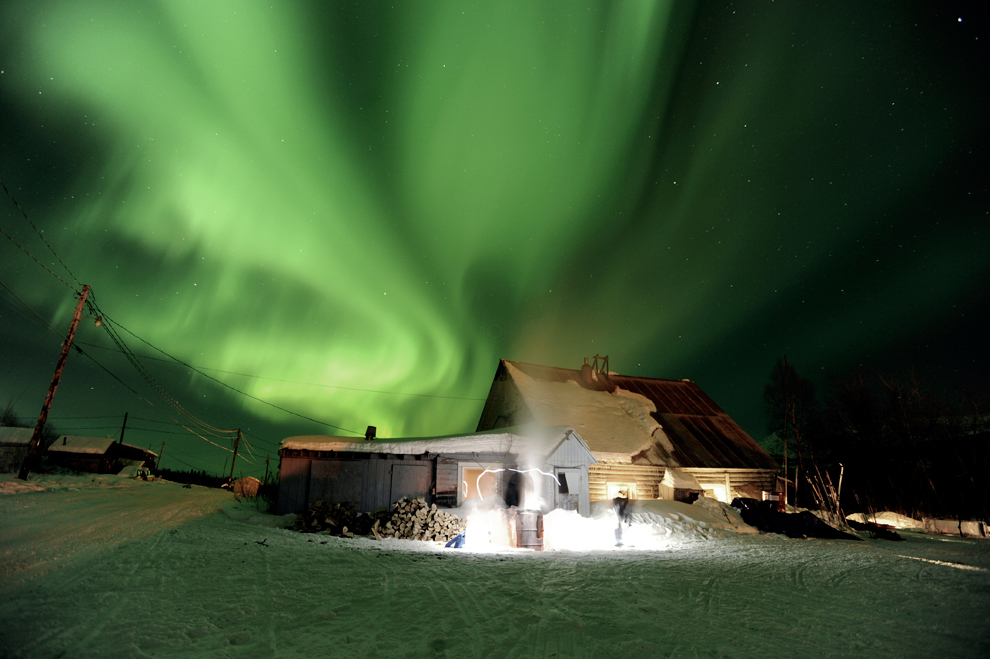 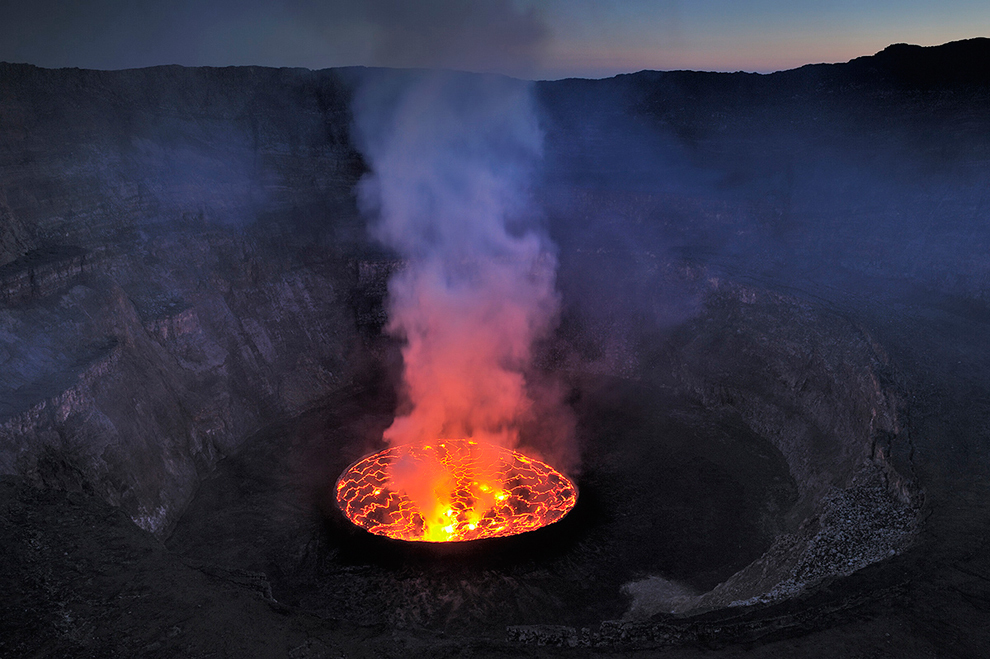 32
The Nyiragongo Crater in the Democratic Republic of Congo is the world's largest lava lake, one of the wonders of the African continent. The crater bubbles 1,300 feet deep. (Olivier Grunewald) # 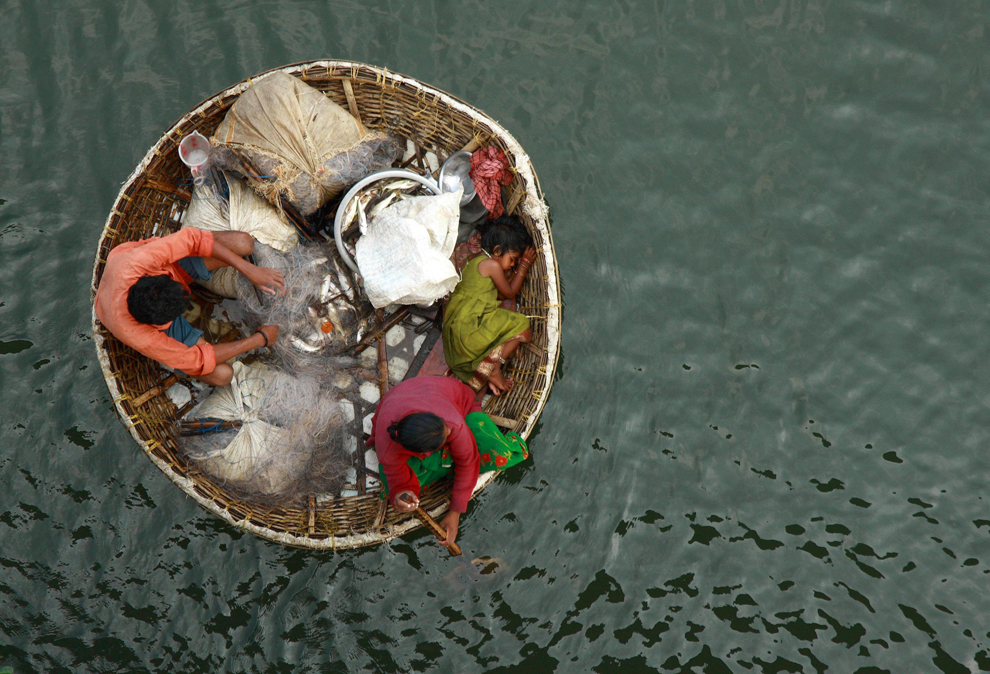 33
A fisherman arranges a net as his wife paddles their boat in the waters of the Periyar river on the outskirts of Kochi, India on January 5, 2011. (Sivaram V/Reuters) # 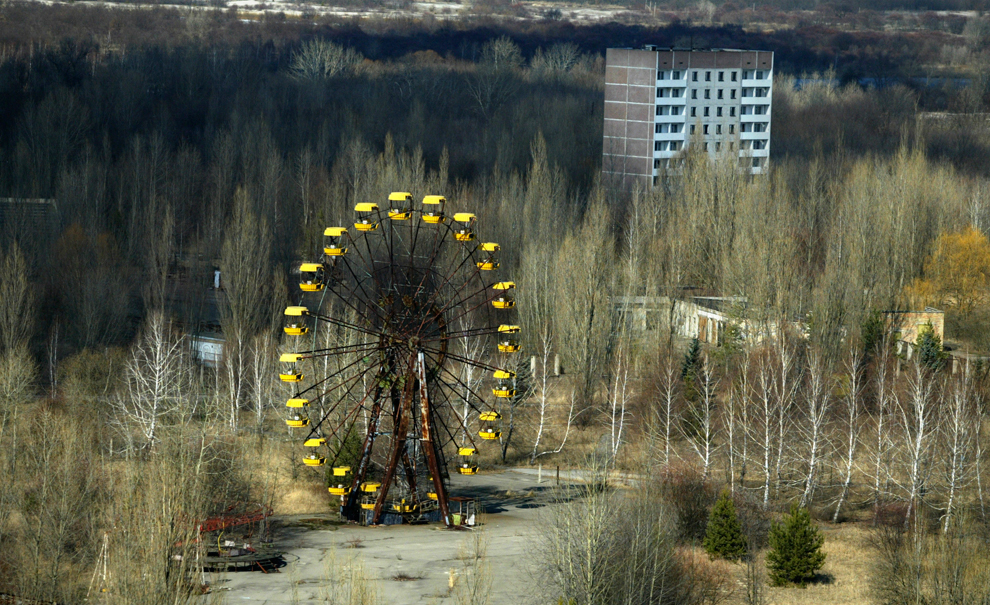 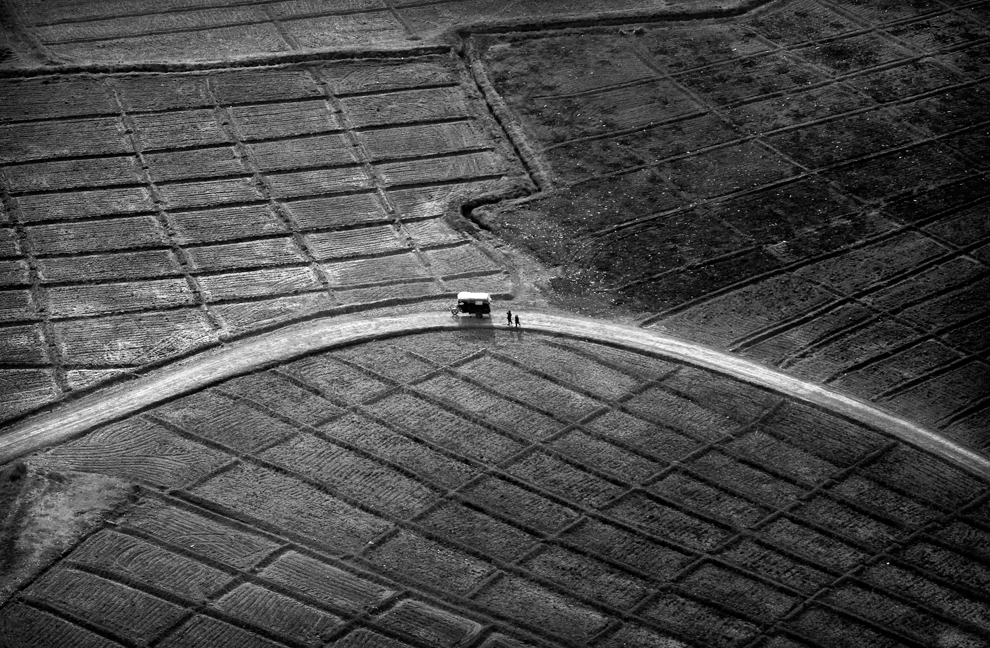 35
Men stand next to an auto rickshaw near farmers' fields on January 20, 2011 in Afghanistan. (Kevin Frayer/AP) # 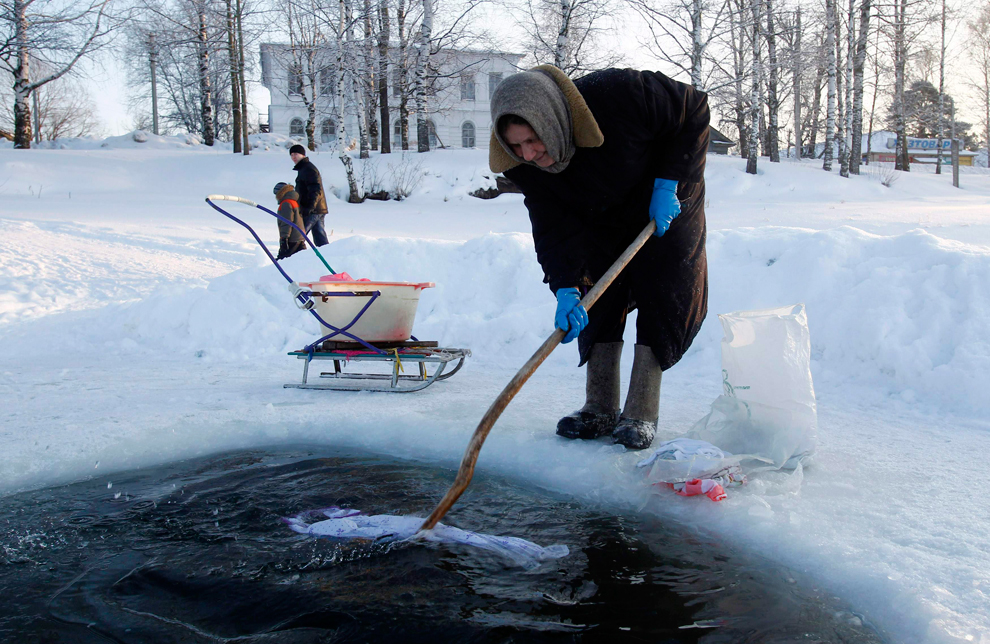 36
A woman uses a stick to rinse her laundry in an ice hole at Siverskoye Lake in the town of Kirillov, Russia on January 17, 2011. (Mikhail Voskresensky/Reuters)#