Of the six days since the revolt reached the capital of Tripoli, August 25th may have been the bloodiest yet. Evidence of fresh massacres by both sides around the city were reported, while the battle to establish full control of Colonel Khadafy's breached compound, Bab al-Aziziya, raged on. In their drive to take command of Tripoli, the rebels concentrated their forces on a block-by-block battle for the streets of the Abu Salim neighborhood, a center of Colonel Khadafy's support. By late afternoon, the fighting had once again swamped Tripoli Central Hospital with wounded civilians and combatants. Khadafy has not been found and the battle continues. --Paula Nelson (26 photos total) 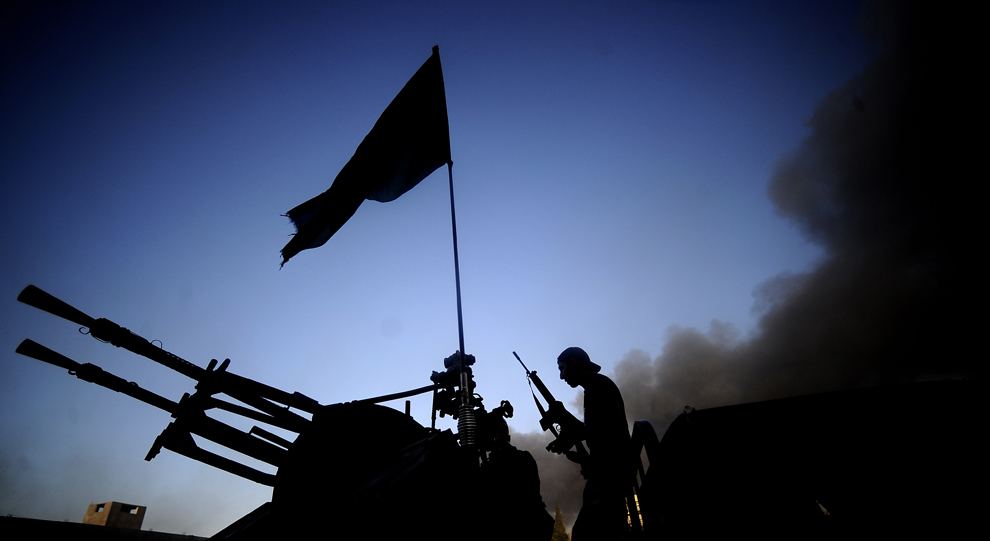 Rebel fighters return from the battle against fighters loyal to Libyan leader Moammar Khadafy in the neighborhood of Abu Salim in the south of the capital Tripoli. Hardened fighters streamed into Tripoli as Libya's rebels sought to deliver a knockout punch to Kadhafi's diehards and to flush out the elusive strongman, dead or alive. (Filippo Monteforte/AFP/Getty Images) 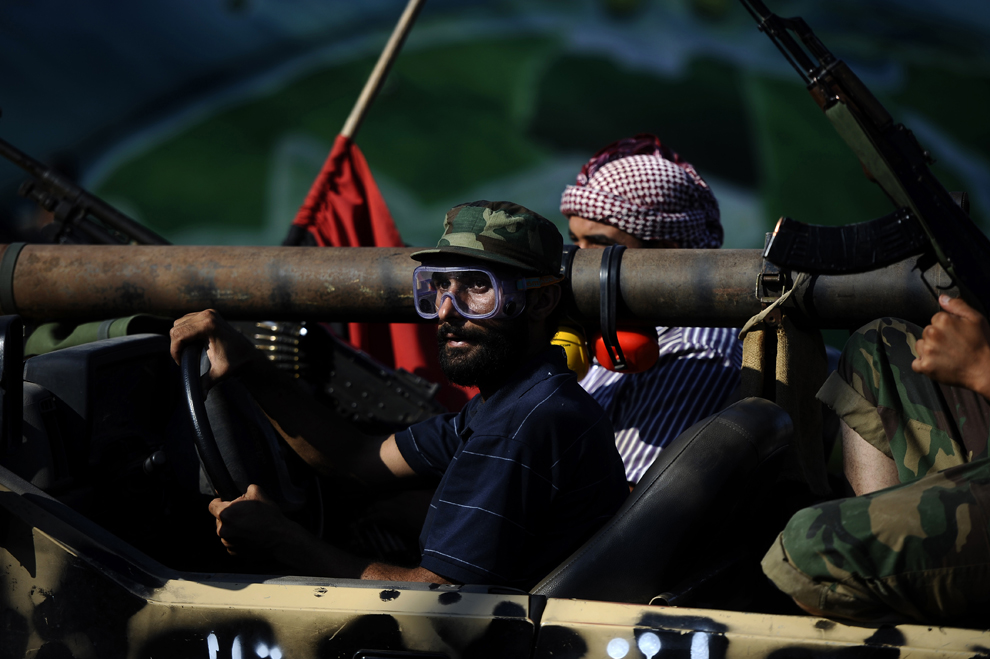 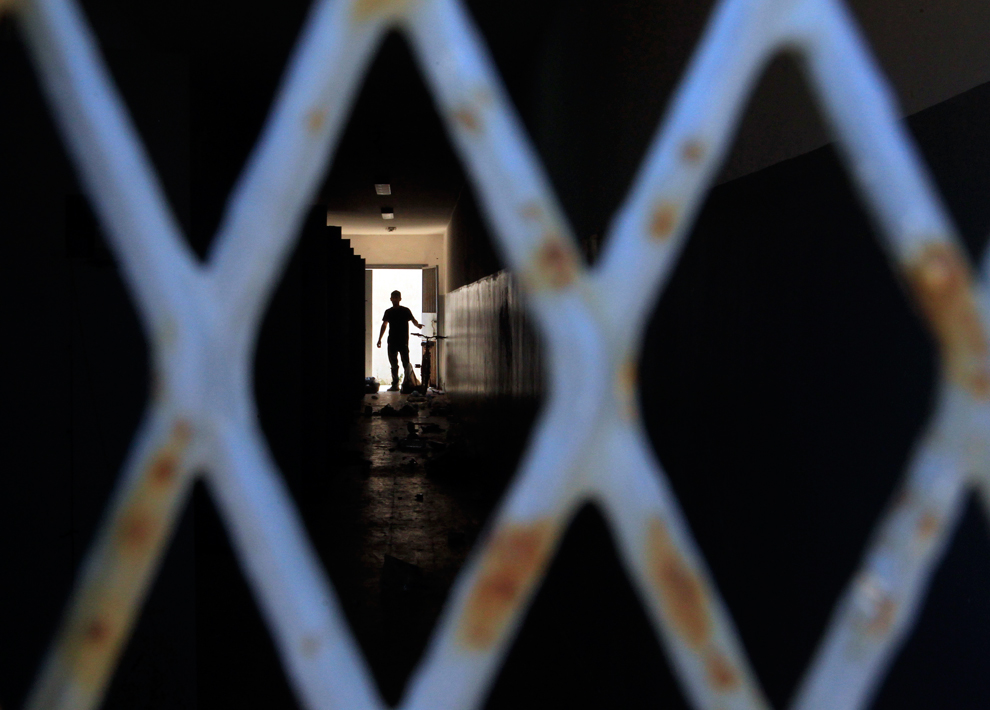 3
A Libyan walks inside the Abu Salim prison in Tripoli, LIbya,one Libya's most notorious prisons and the scene of a 1996 massacre of prisoners. (Sergey Ponomarev/Associated Press) # 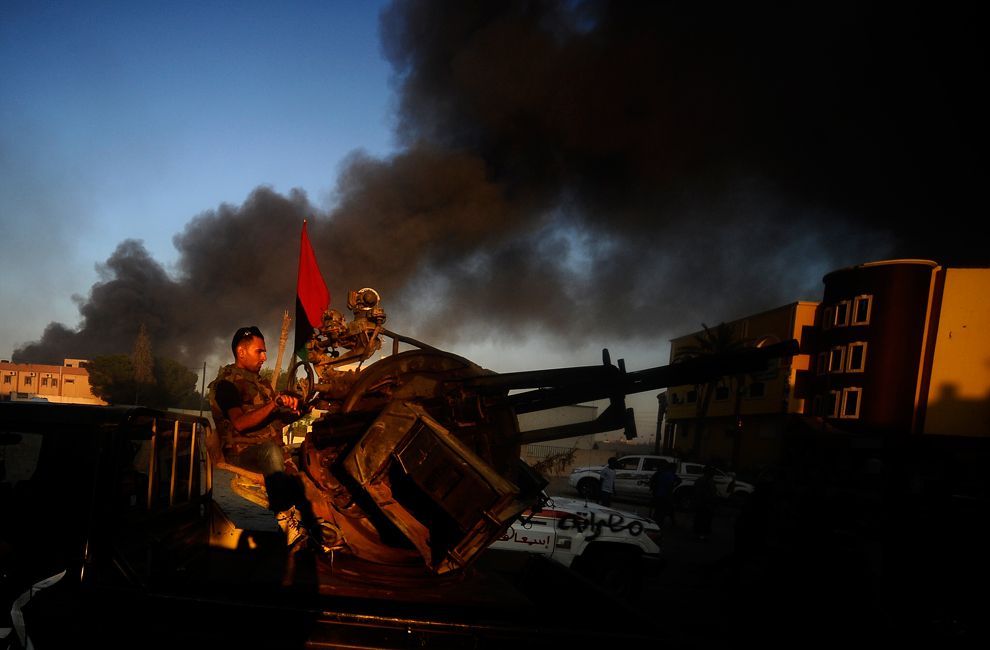 4
Rebel fighters maneuver their gun during fighting with loyalists to Khadafy, in the neighborhood of Abu Salim. (Filippo Monteforte/AFP/Getty Images) # 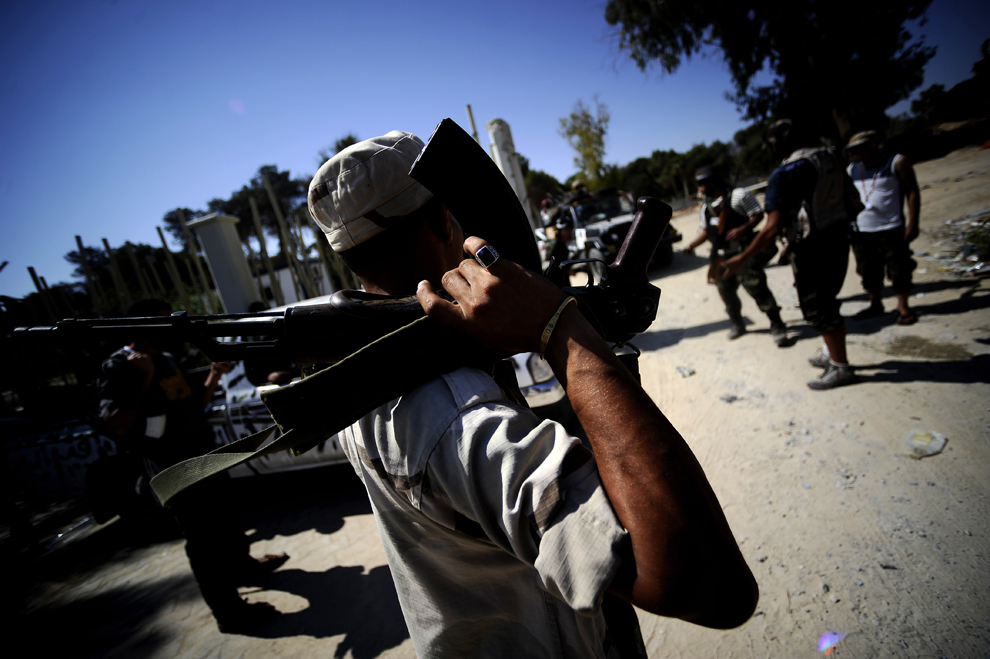 5
Libyan rebels gather at the entrance of the al-Maser forest in southern Tripoli where they found boxes of ammunition hidden underground by Kadhafi's forces. (Filippo Monteforte/AFP/Getty Images) # 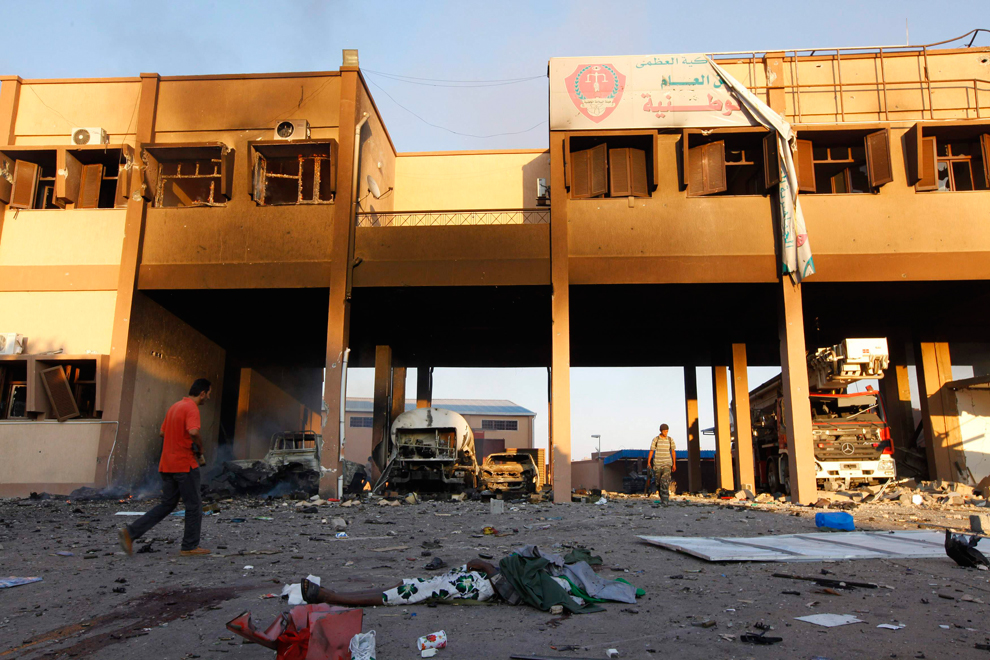 6
The body of a suspected mercenary lies near the rubble of a fire station during a fight for the rebel's final push to flush out Khadafy's forces in Abu Salim district. Libyan rebels stormed Tripoli's Abu Salim district, one of the main holdouts of forces loyal to Khadafy in the capital, following NATO air strikes on a building in the area. (Anis Mili/Reuters) # 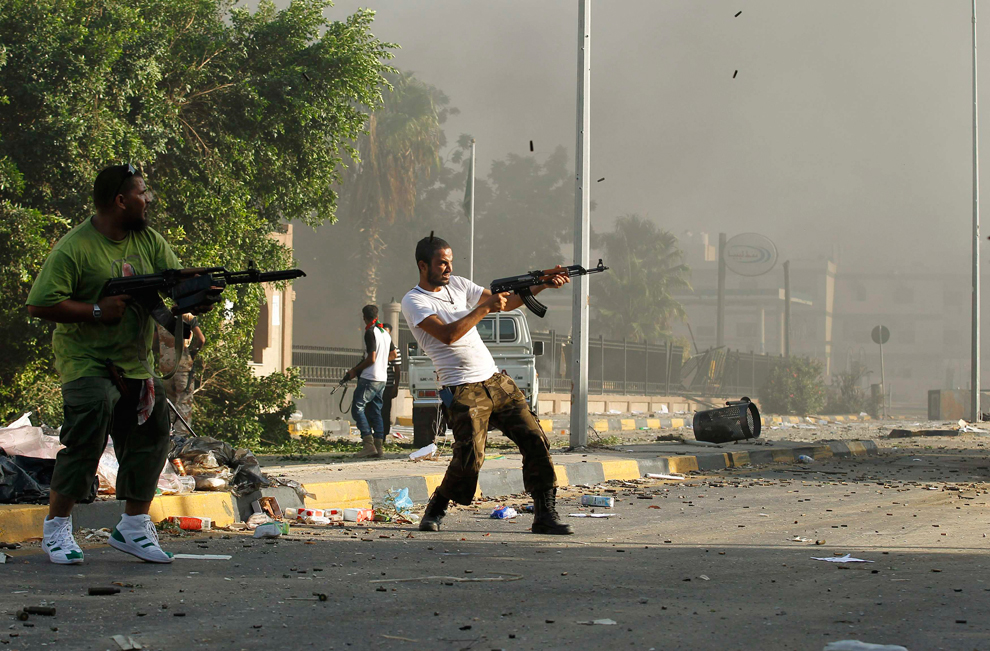 7
Libyan rebel fighters fire their weapons during a fight for the final push to flush out Moammar Khadafy's forces. (Zohra Bensemra/Reuters) #

8
A Libyan rebel soldier reacts after a fellow fighter was brought in with a wound, sustained in battle with pro-Khadafy loyalists, to the Tripoli Central Hospital. Heavy fighting continues in the Libyan capital. (Daniel Berehulak/Getty Images) # 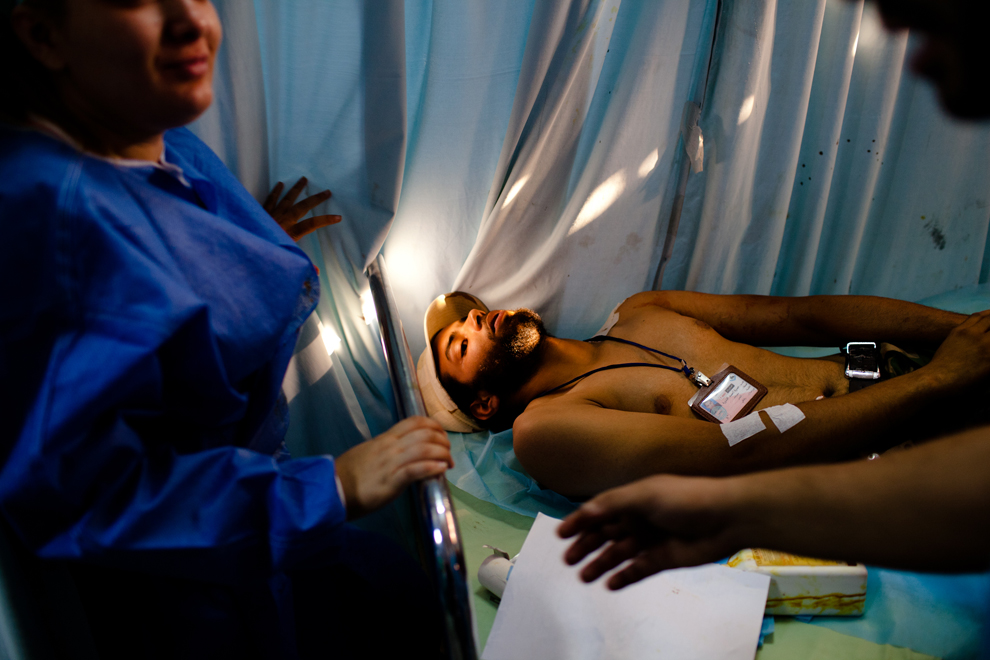 9
A Libyan rebel fighter receives medical attention after receiving a gun wound to his shoulder at the Tripoli Central Hospital. The Rebels, who have issued a $1.7m reward for Gaddafi's capture "dead or alive," are attempting to reach Colonel Khadafy's hometown of Sirte but have met loyalist resistance. (Daniel Berehulak/Getty Images) # 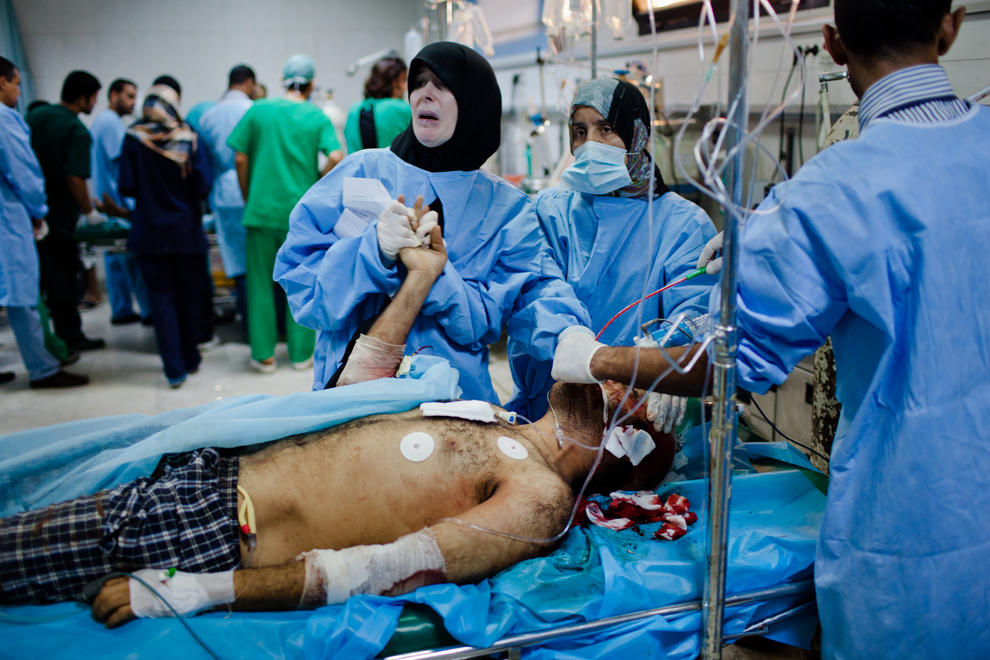 10
Medical staff treat a Libyan rebel fighter after a bullet entered one ear and exited out the other, according to a doctor, at the Tripoli Central Hospital. (Daniel Berehulak/Getty Images) # 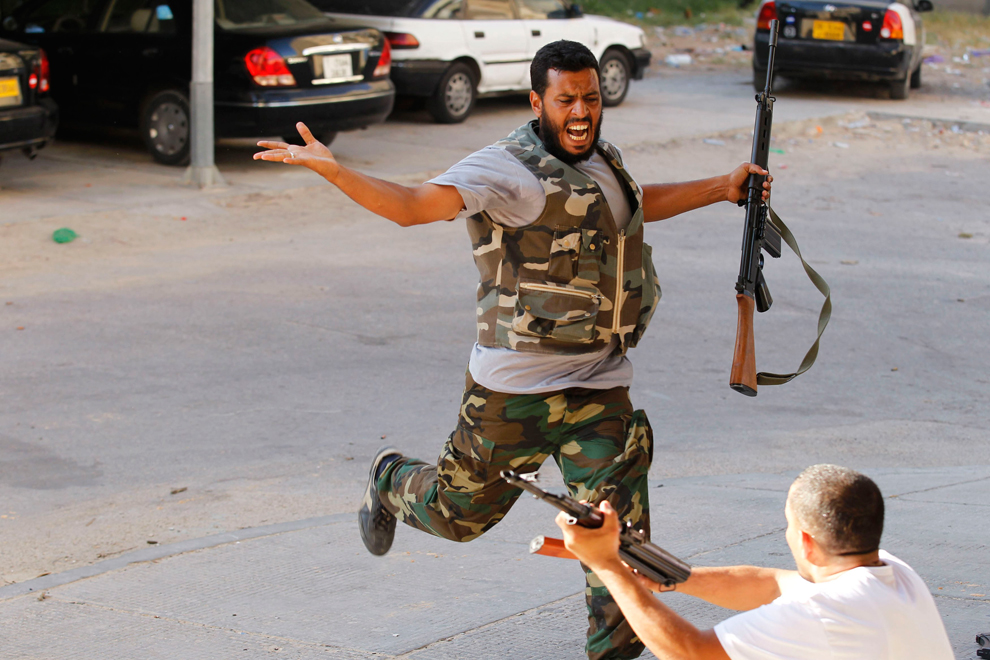 11
A Libyan rebel fighter screams to his comrade asking him to stop firing his machine gun towards buildings during a fight for the final push to flush out Muammar Gaddafi's forces in Abu Salim district. (Zohra Bensemra/Reuters) # 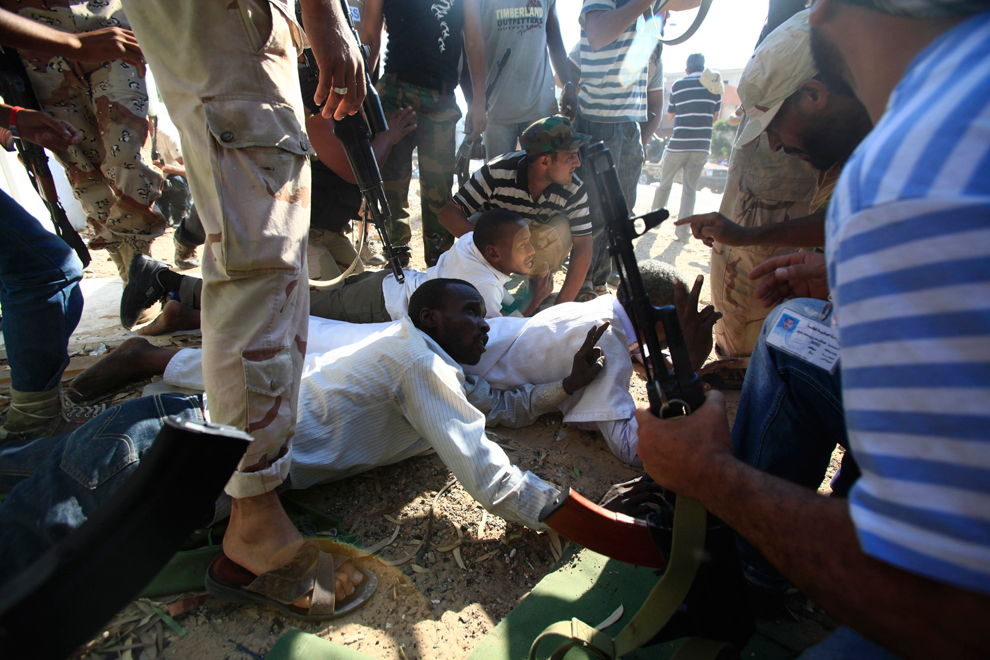 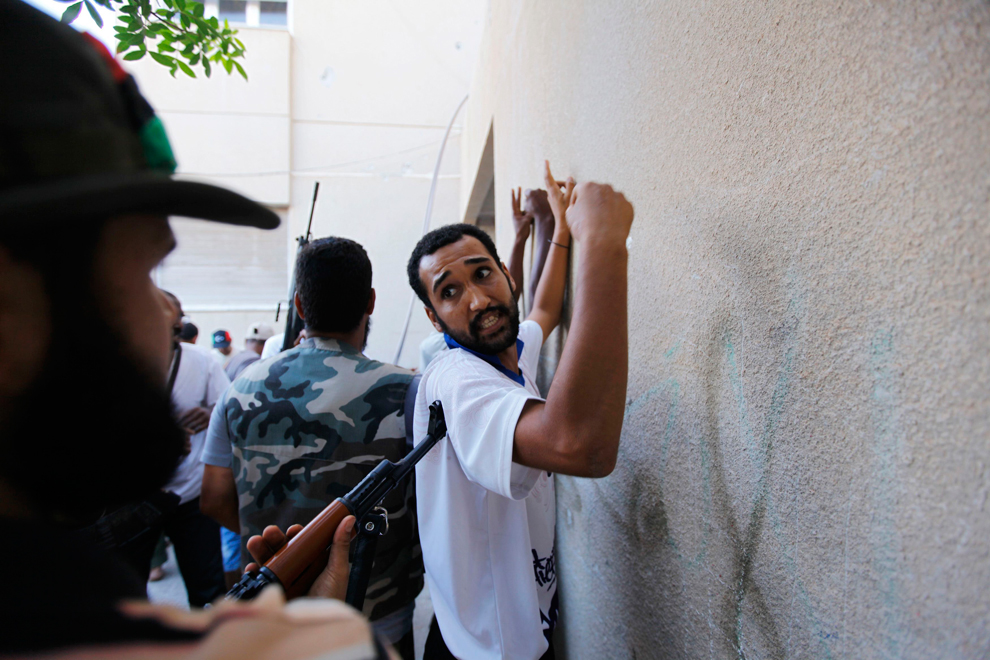 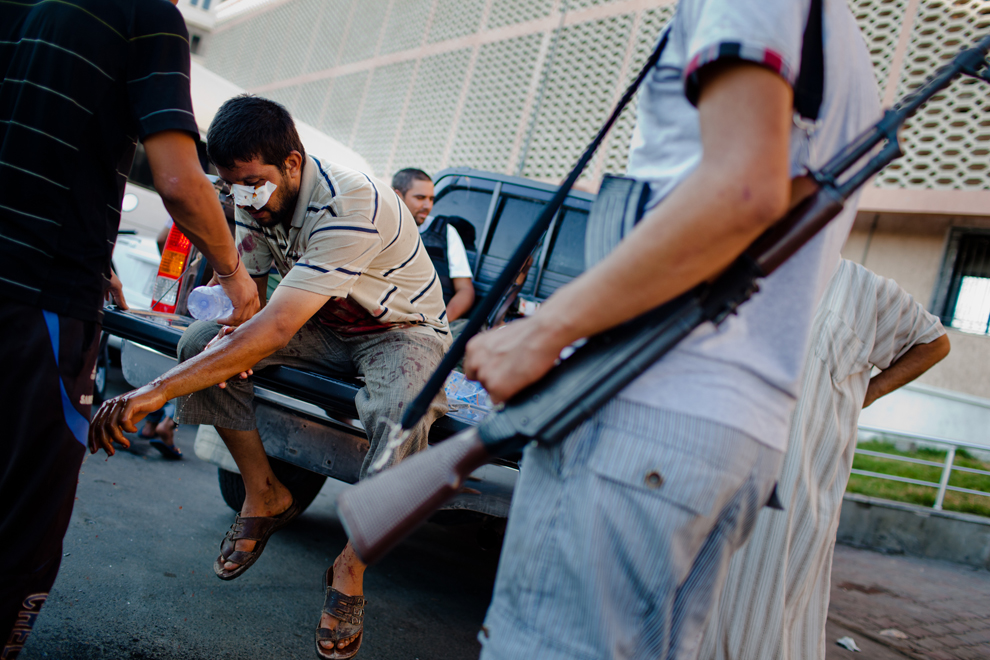 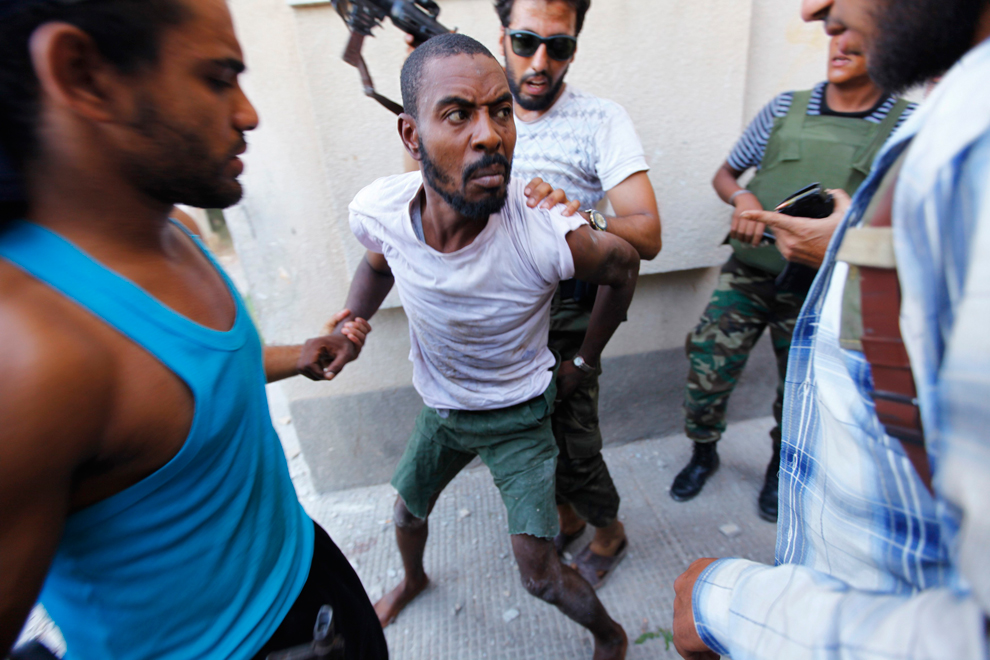 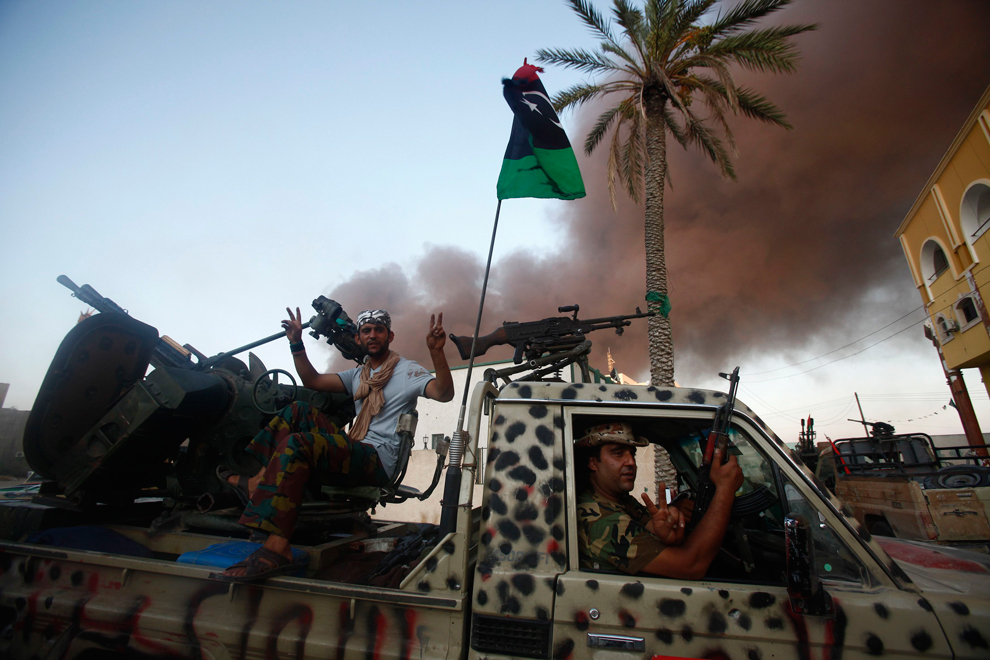 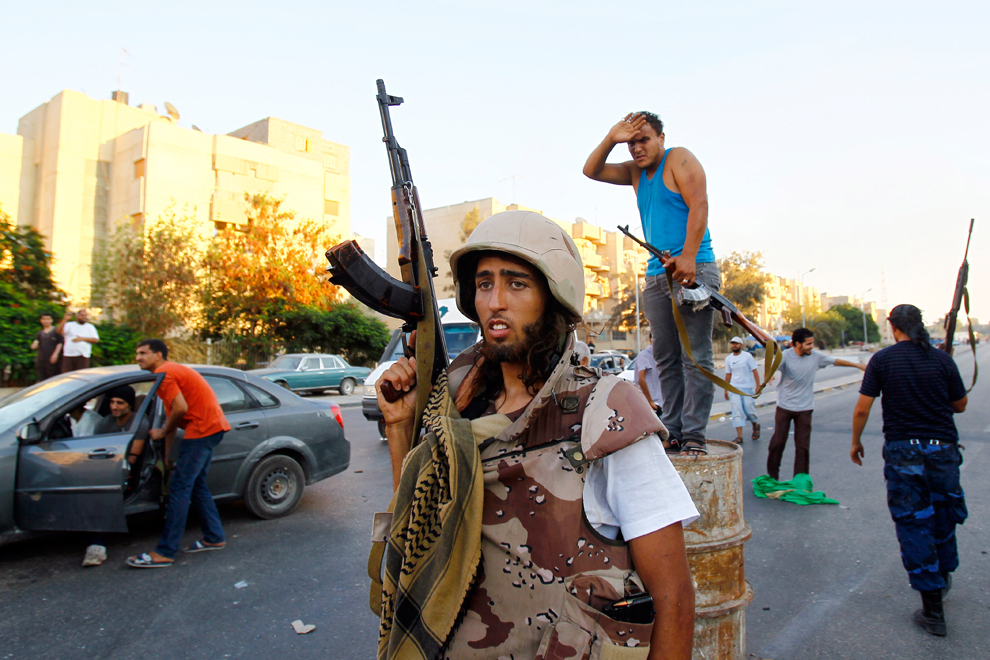 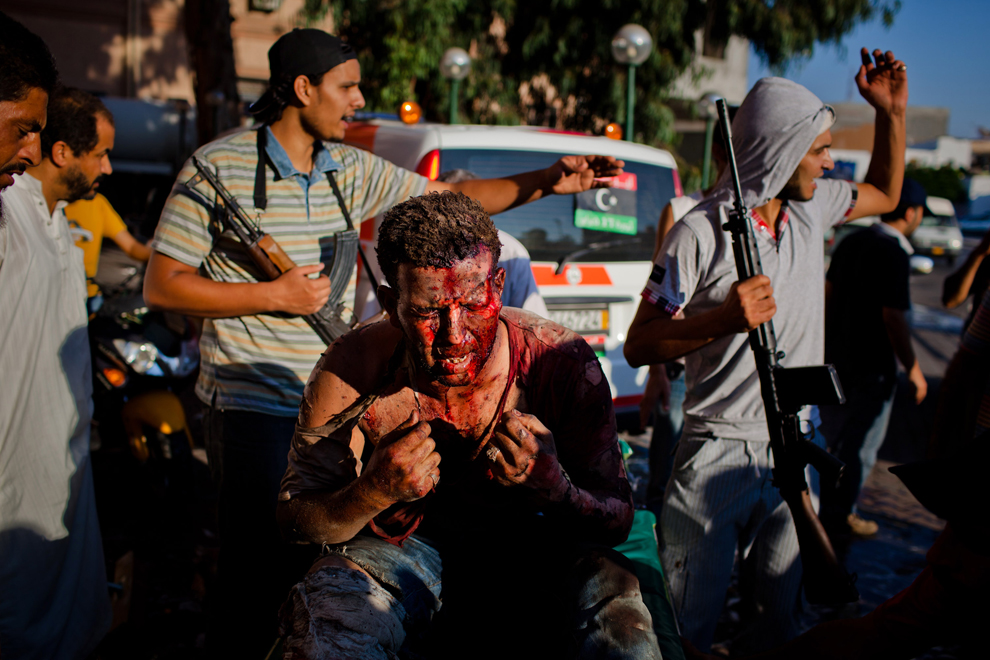 19
Libyan rebel fighters protect a pro-Khadafy loyalist fighter from angry onlookers as he is brought in for medical attention to the Tripoli Central Hospital. (Daniel Berehulak/Getty Images) # 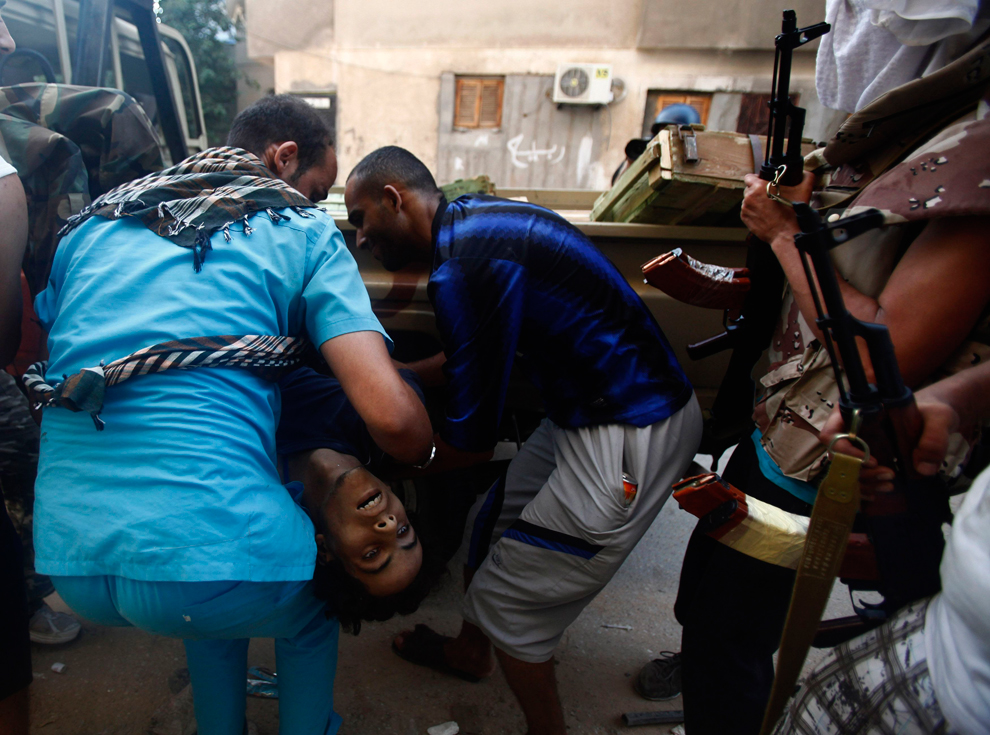 20
A medic and Libyan rebel fighter carry the body of a comrade in Abu Salim district in Tripoli. (Zohra Bensemra/Reuters) # 21
Rebel fighters check an armoured door in a tunnel in the ransacked Bab al-Aziziya compound of ousted Libyan leader Moammar Khadafy. Libyan rebels said they were sending in special forces units in their hunt for the fugitive strongman, whose supporters are now pinned down in pockets of resistance in the capital, Tripoli.(Zohra Bensemra/Reuters) # 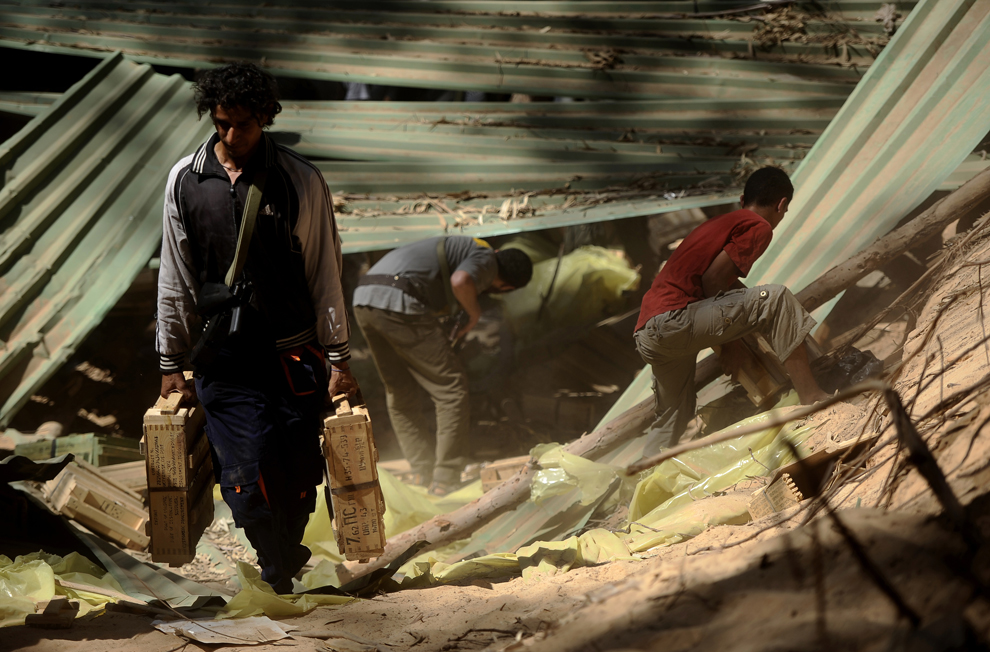 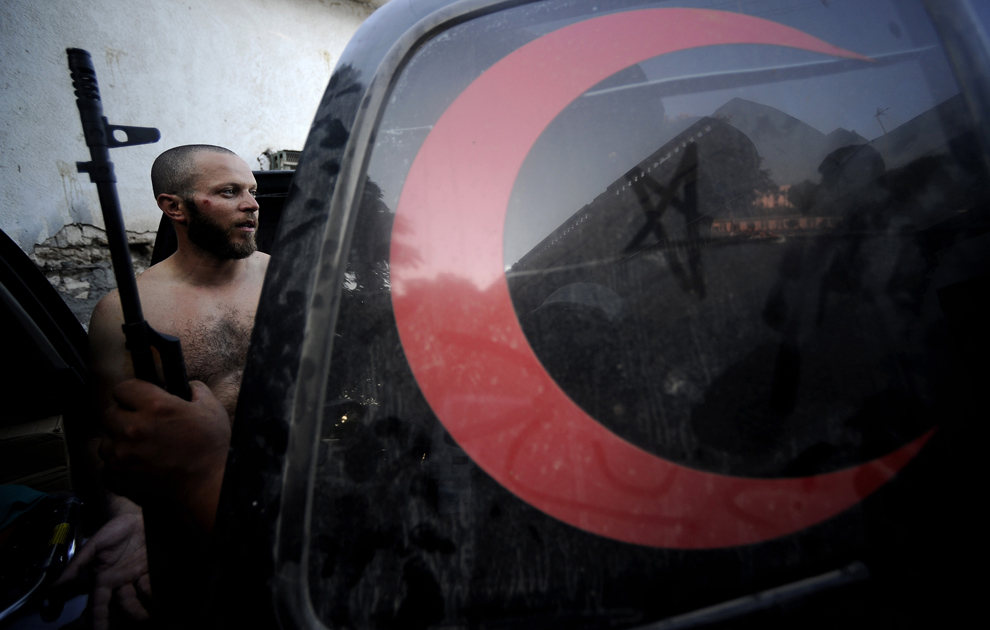 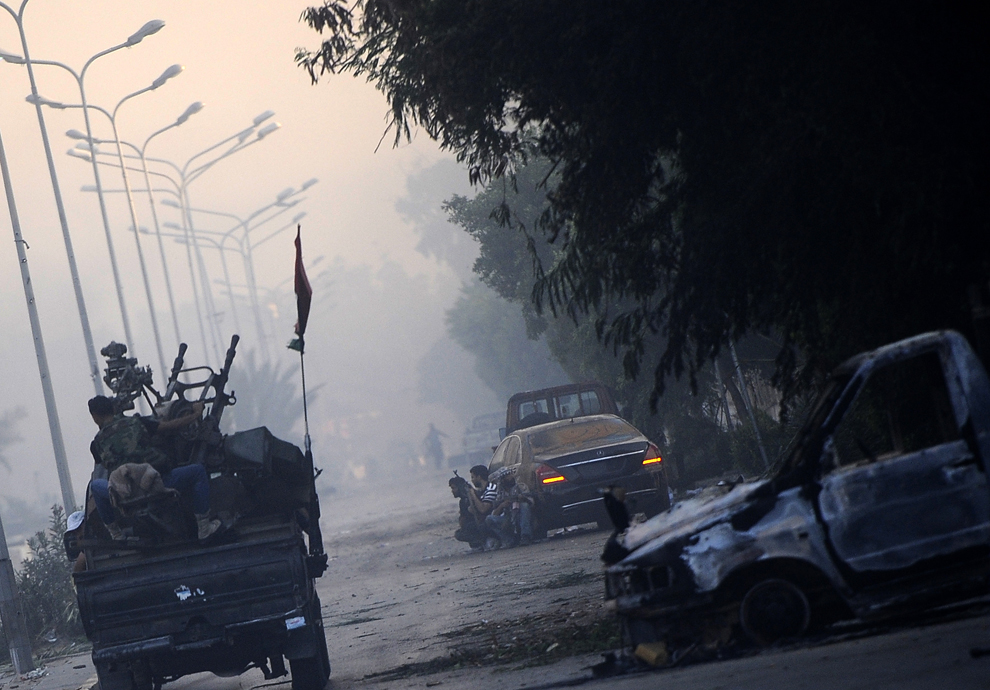 24
Rebel fighters patrol the streets in a neighborhood south of the capital. (Filippo Monteforte/AFP/Getty Images) # 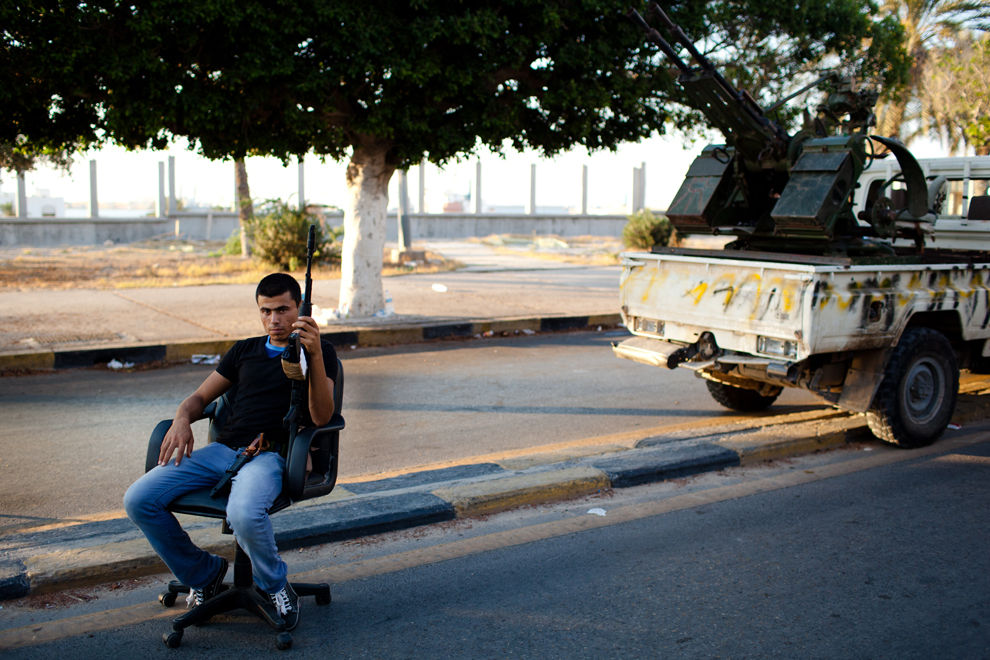 25
A Libyan rebel fighter sits at a check point in Tripoli. Heavy fighting continues in the Libyan capital between Khadafy's forces and the surging rebel presence.(Daniel Berehulak/Getty Images) # 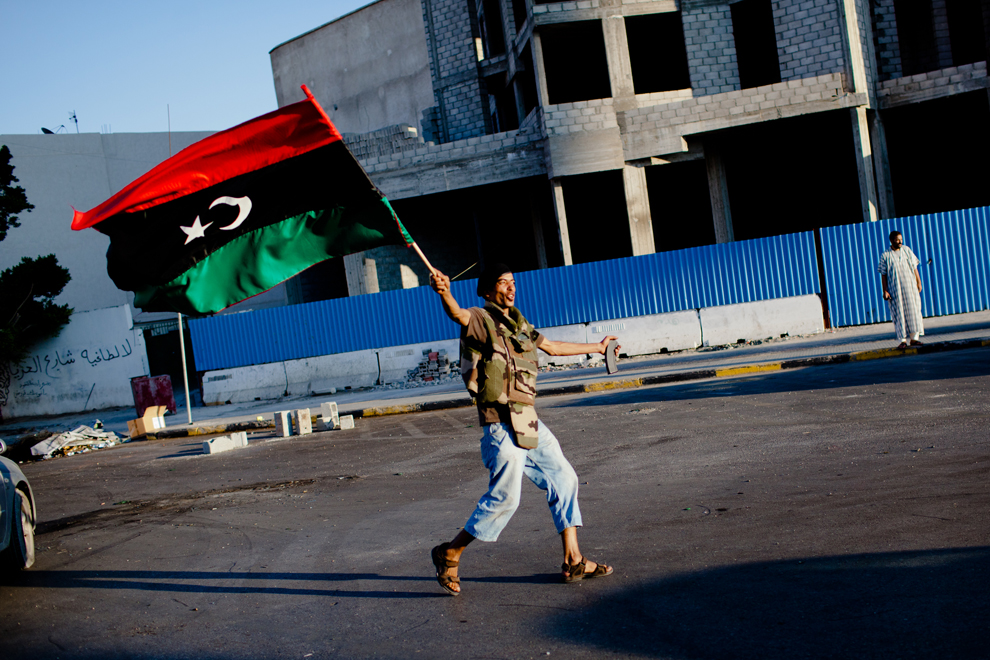 26
A Libyan rebel fighter yells anti-Khadafy slogans as he celebrates in the street in Tripoli. (Daniel Berehulak/Getty Images) #