After an emotional run through the tournament that few predicted, Japan emerged yesterday as the unlikely champion of the FIFA Women's World Cup Germany 2011. After enduring the triple disasters of the earthquake, tsunami, and Fukushima Diaichi nuclear catastrophe, Japan rejoiced in the first good news in months. The final came in dramatic fashion against the United States in a penalty shoot-out after the score was tied 2-2 in regulation. Sixteen countries fought for the title in Germany, resulting in the first Asian world champion. Collected here are images of the games, fans, and celebration. -- Lane Turner (30 photos total) 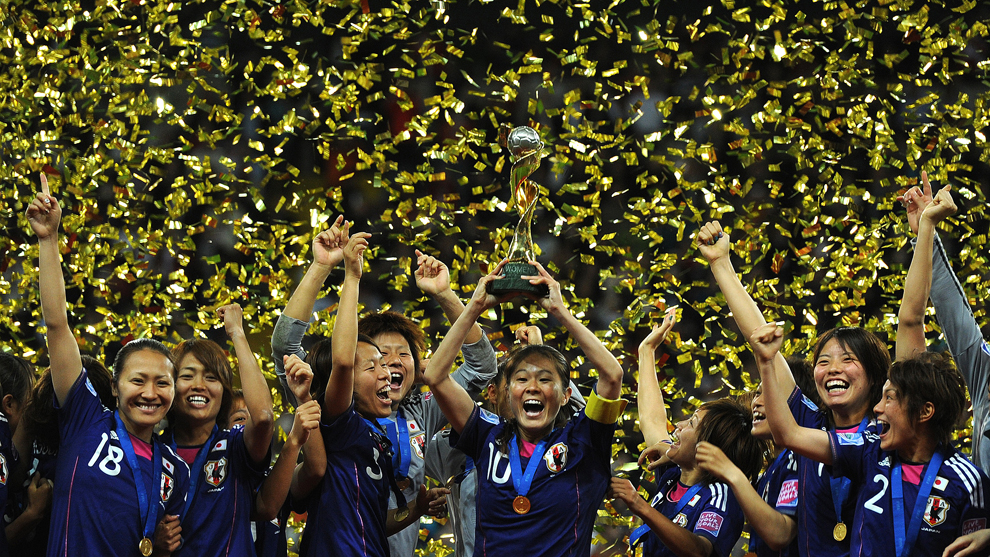 Japan's midfielder Homare Sawa celebrates with the trophy and teammates after the FIFA Women's Football World Cup final match against the US on July 17, 2011 in Frankfurt am Main Germany. Japan won 3-1 in a penalty shoot-out after the final had finished 2-2 following extra-time. (Patrik Stollarz/AFP/Getty Images) 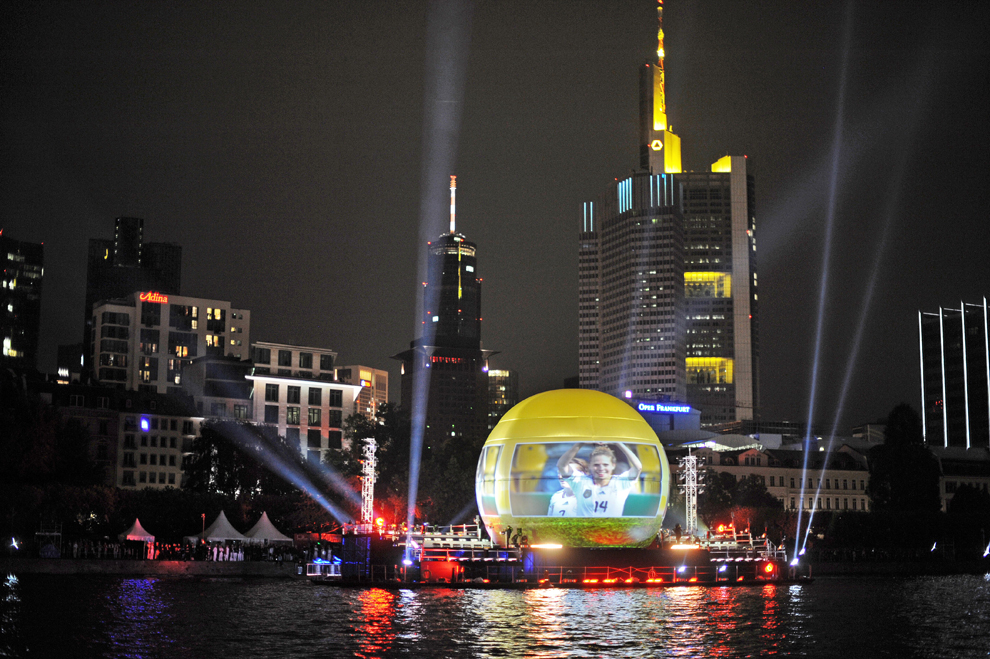 2
A video of Kim Kullig, German national soccer player, is projected at an open air party in Frankfurt prior to the start of the Women's Soccer World Cup in Germany on June 25, 2011. (Thomas Lohnes/dapd/AP) # 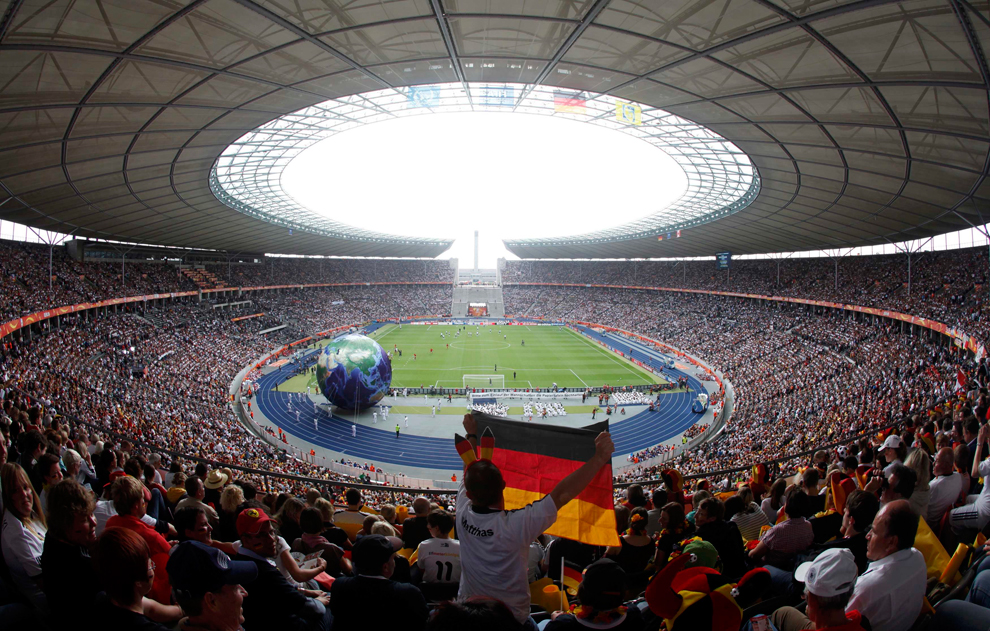 3
Fans crowd the Olympic stadium before the opening ceremony of the Women's World Cup in Berlin June 26, 2011. (Thomas Peter/Reuters) # 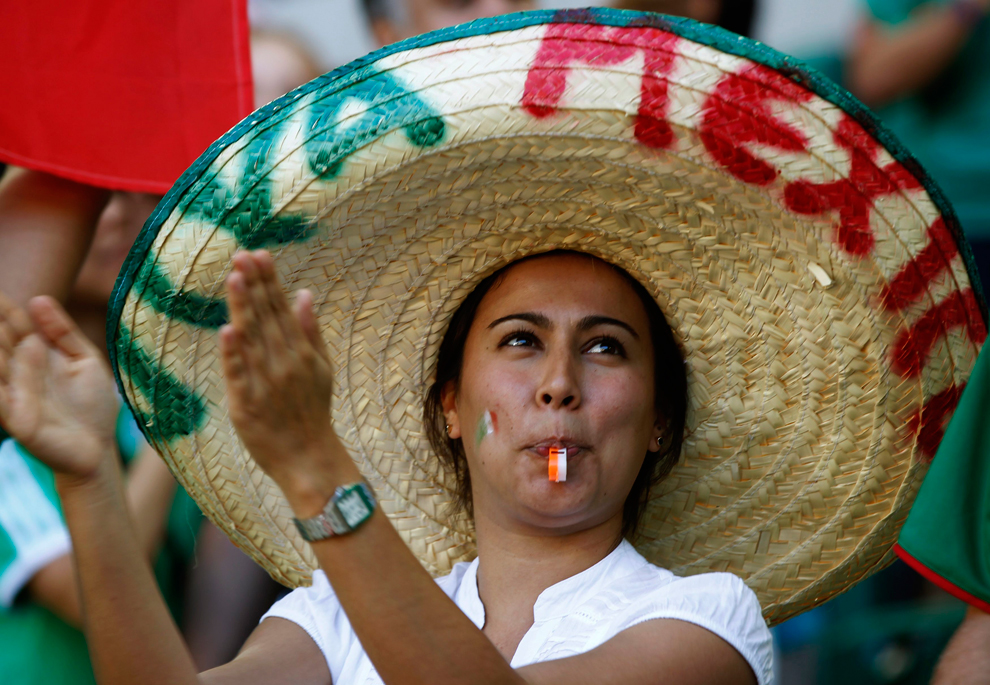 4
A supporter of Mexico cheers for her team before their Women's World Cup Group B soccer match against England in Wolfsburg June 27, 2011. (Ina Fassbender/Reuters) # 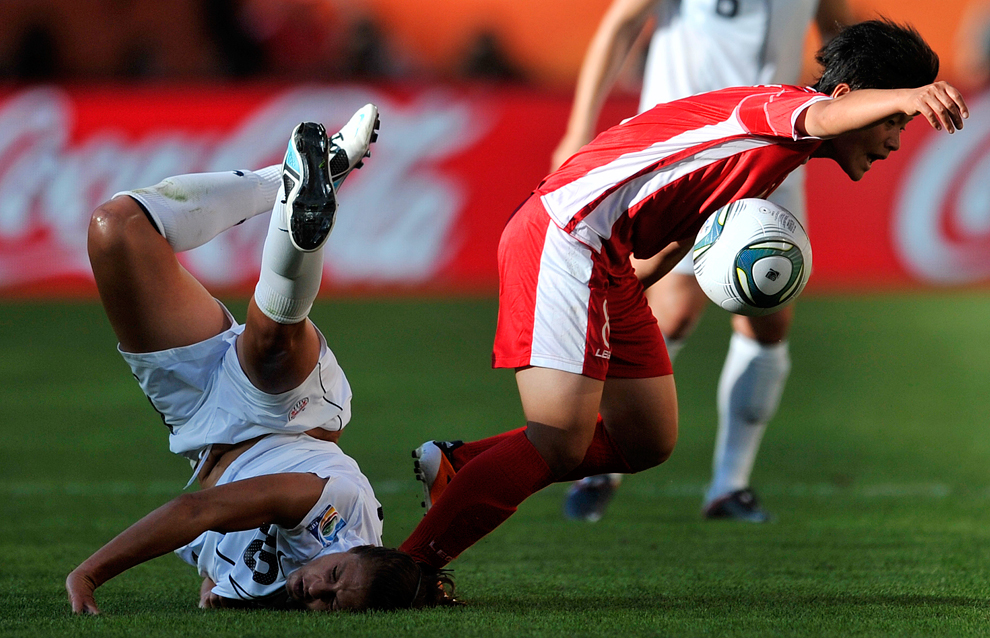 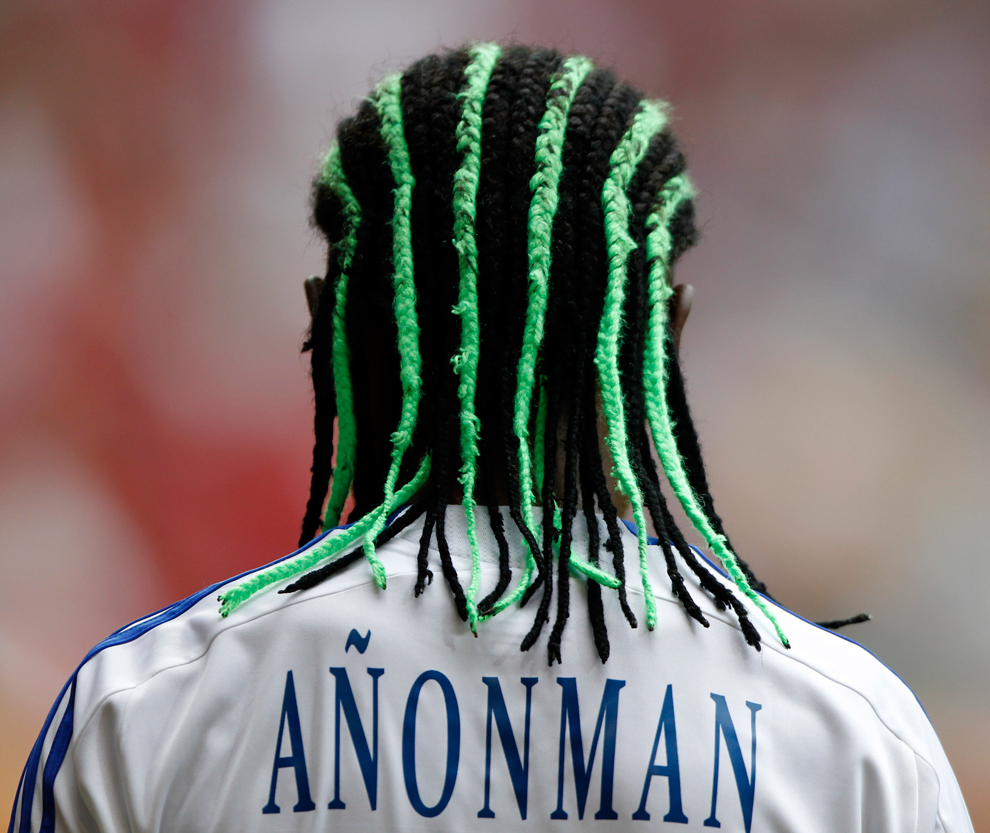 6
Equatorial Guinea's Anonman brings flair to the game during the match against Norway in Augsburg on June 29, 2011. (Matthias Schrader/AP) # 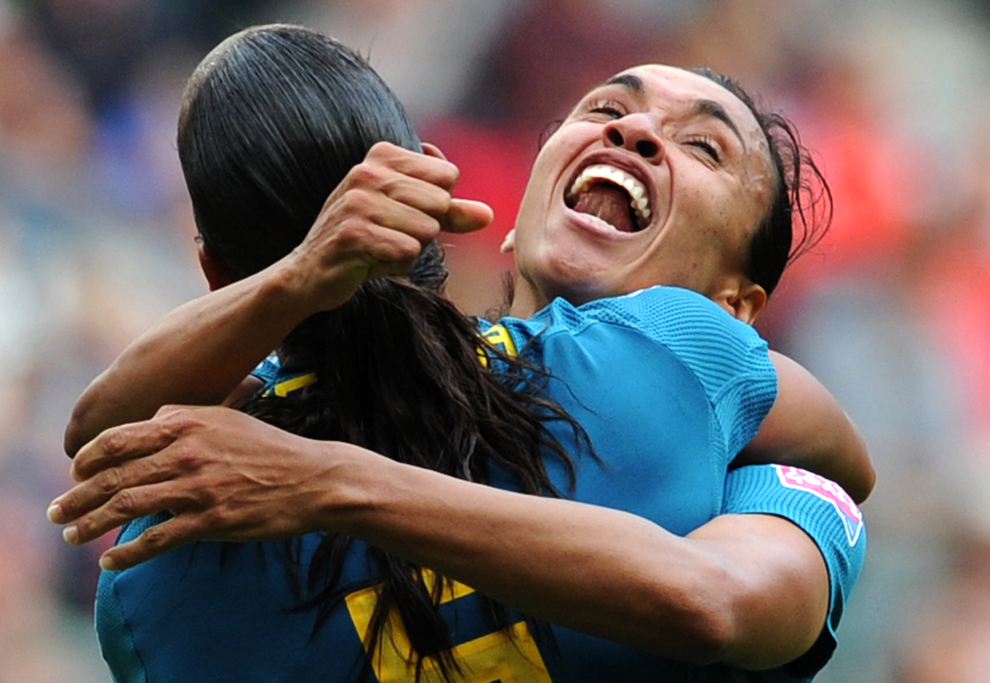 7
Brazil's striker Marta (right) and defender Rosana celebrate after the 1-0 goal by Rosana during their match against Australia on June 29, 2011 at the Stadion im Borussen-Park in Moenchengladbach, Germany. Brazil won 1-0. (Patrik Stollarz/AFP/Getty Images) # 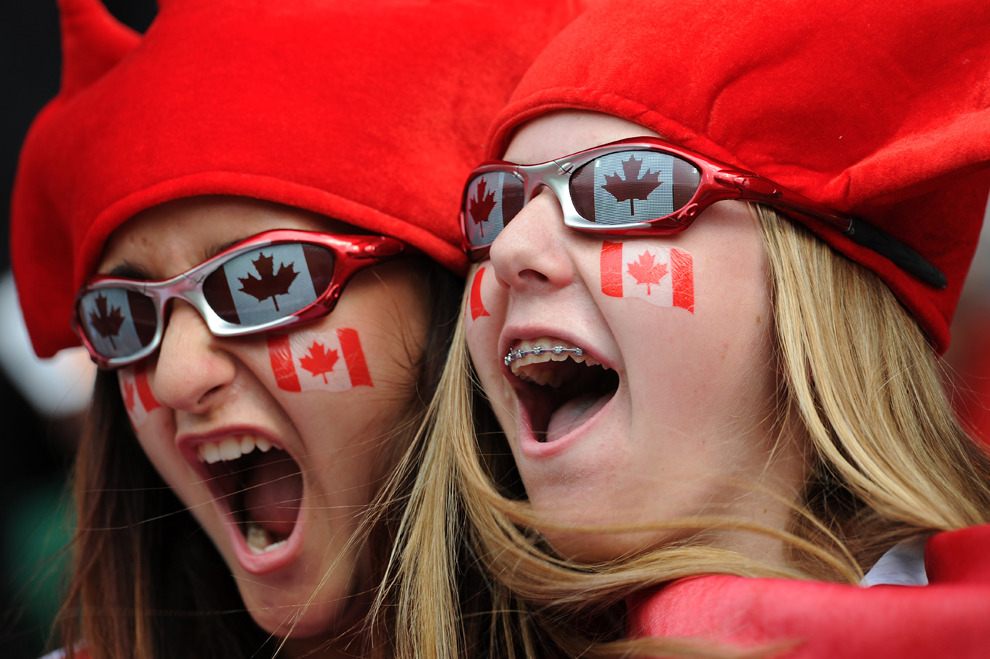 8
Canada's supporters cheer prior to the match against France on June 30, 2011 in Bochum, Germany. (Patrik Stollarz/AFP/Getty Images) # 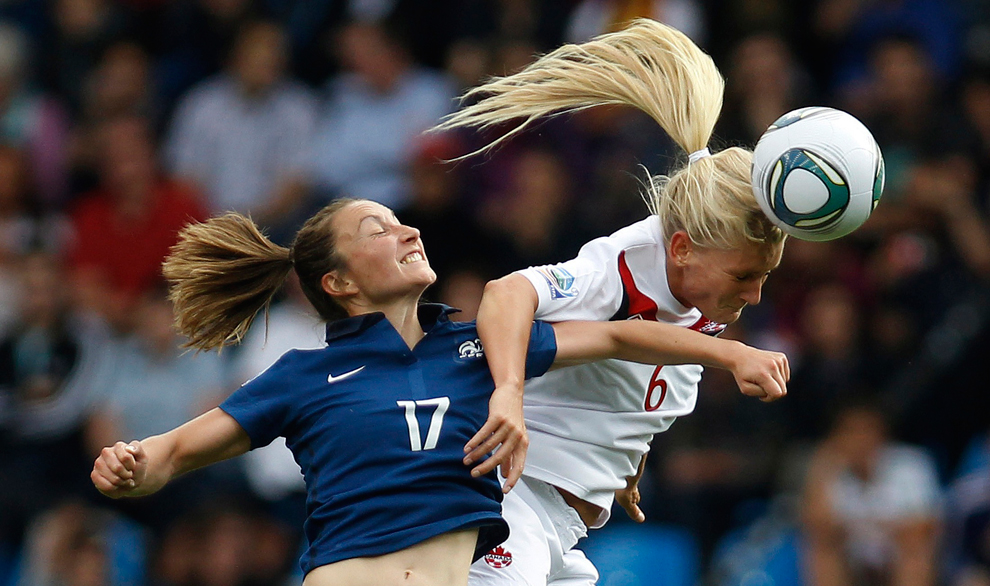 9
Kaylyn Kyle of Canada and Gaetane Thiney (left) of France jump for the ball during their match in Bochum, Germany June 30, 2011. (Ina Fassbender/Reuters) # 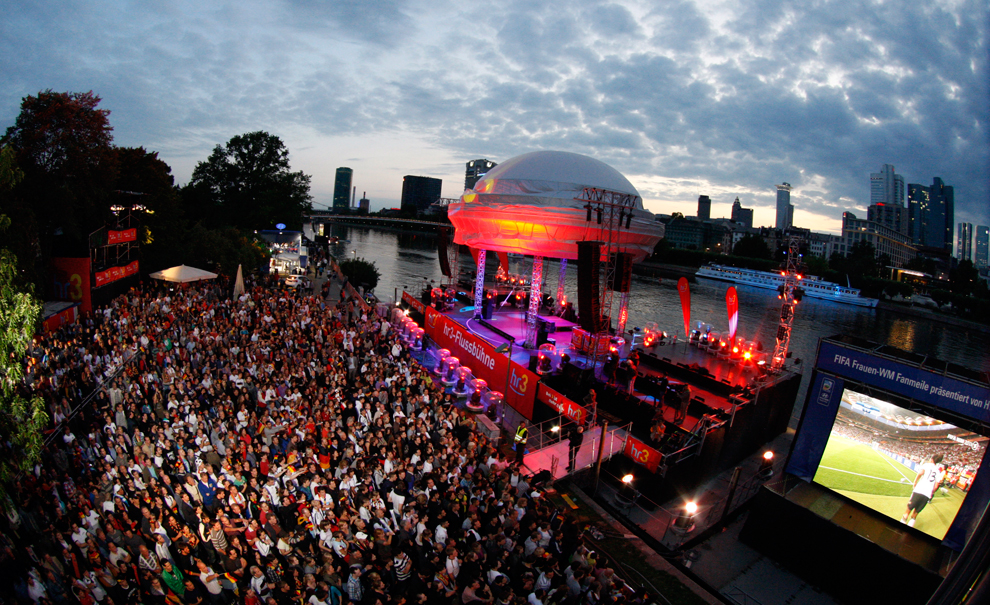 10
Germany fans celebrate during the match against Nigeria at a public viewing event on June 30, 2011 in Frankfurt am Main. (Hasan Bratic/Bongarts/Getty Images) # 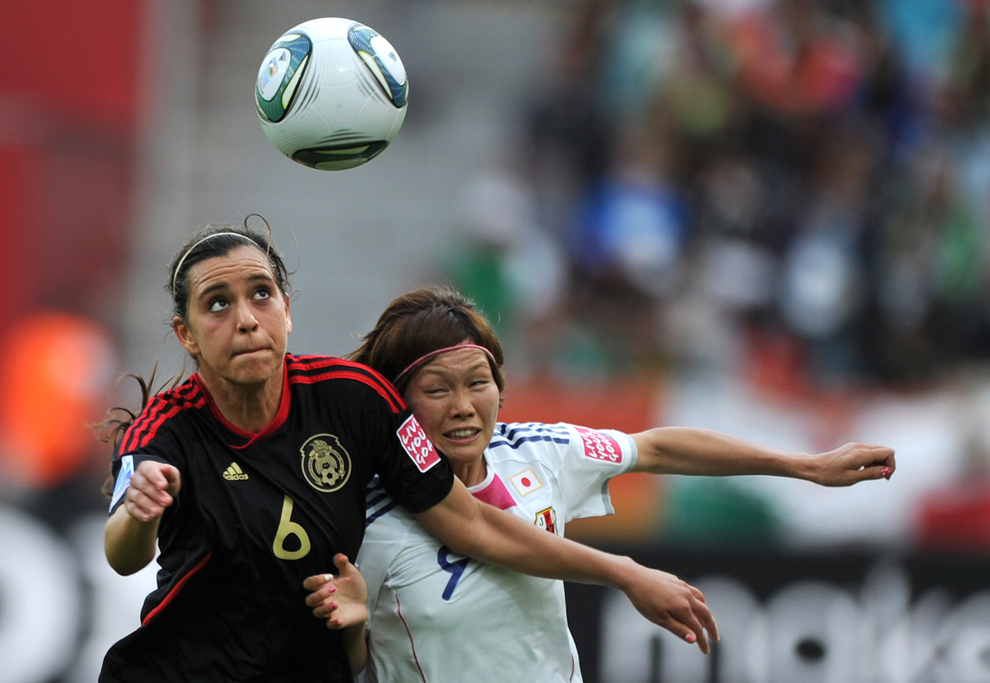 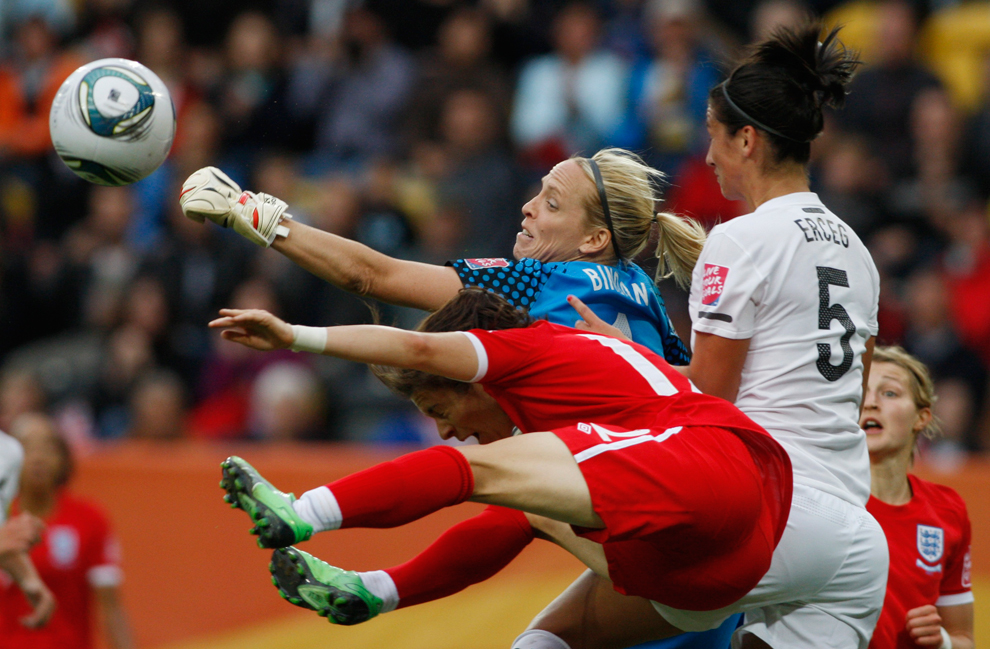 12
New Zealand goalkeeper Jenny Bindon deflects a ball as she is challenged by England's Alex Scott (in red) during their match in Dresden on July 1, 2011. (Petr David Josek/AP) # 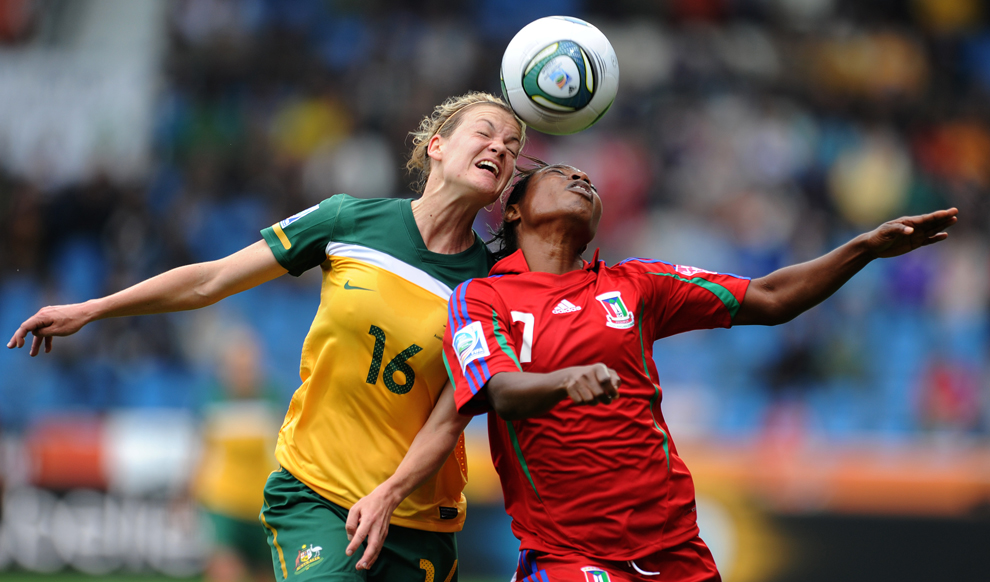 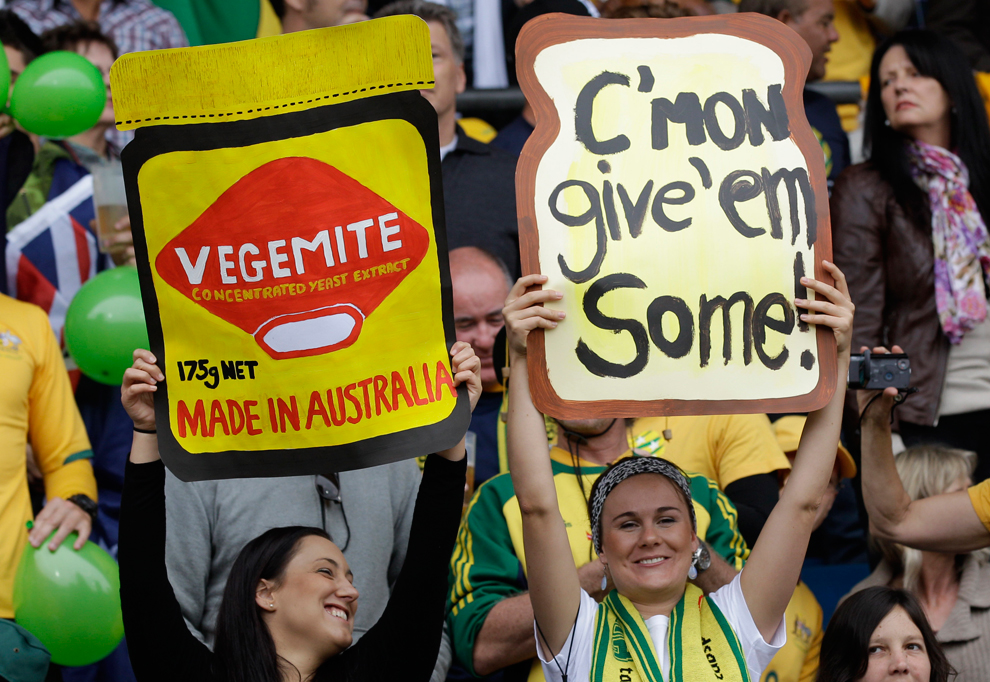 14
Australian soccer fans hold signs prior to the group D match between Australia and Equatorial Guinea in Bochum, Germany on July 3, 2011. (Frank Augstein/AP) # 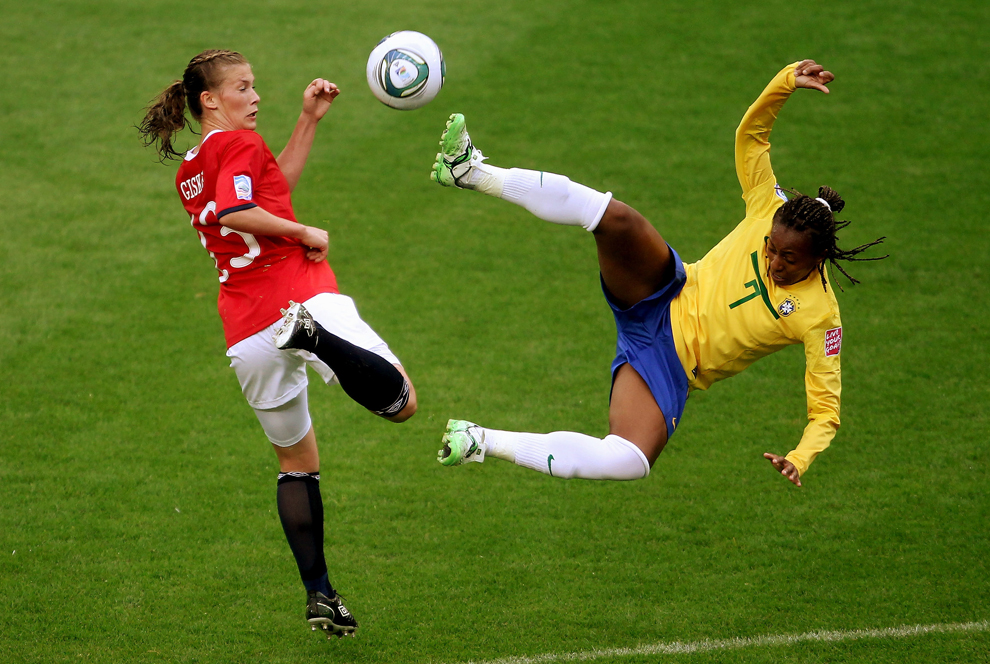 15
Ester of Brazil (right) attempts a bicycle kick against Madeline Giske of Norway during their match at the Arena Im Allerpark on July 3, 2011 in Wolfsburg, Germany. (Scott Heavey/Getty Images) # 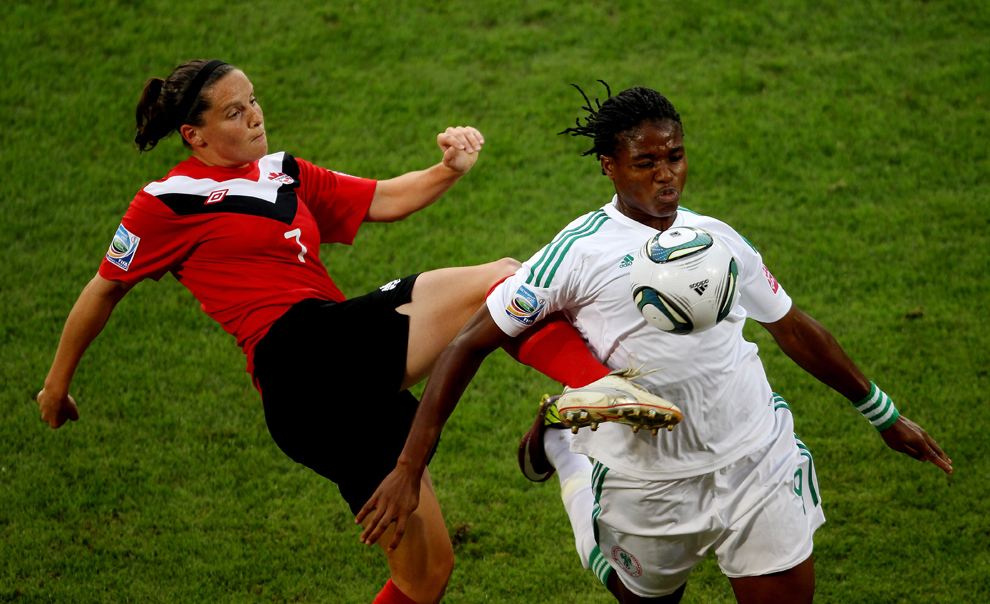 16
Rhian Wilkinson of Canada (left) challenges Desire Oparanozie of Nigeria during their match at the Rudolf-Harbig Stadium on July 5, 2011 in Dresden. (Scott Heavey/Getty Images) # 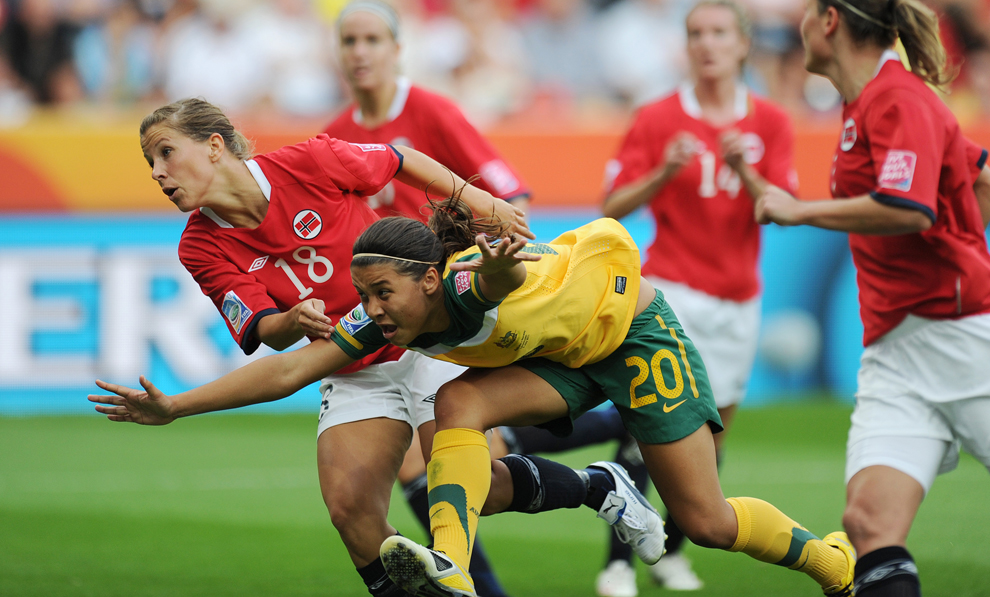 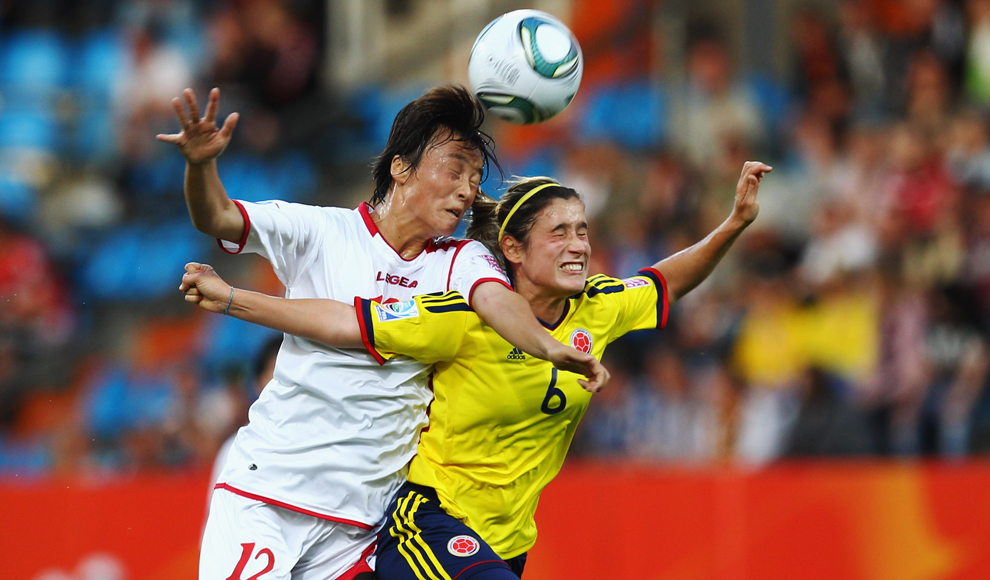 18
Jon Myong Hwa (left) of Korea DPR is challenged by Daniela Montoya of Colombia during their match on July 6, 2011 in Bochum, Germany. (Alex Grimm/Getty Images) # 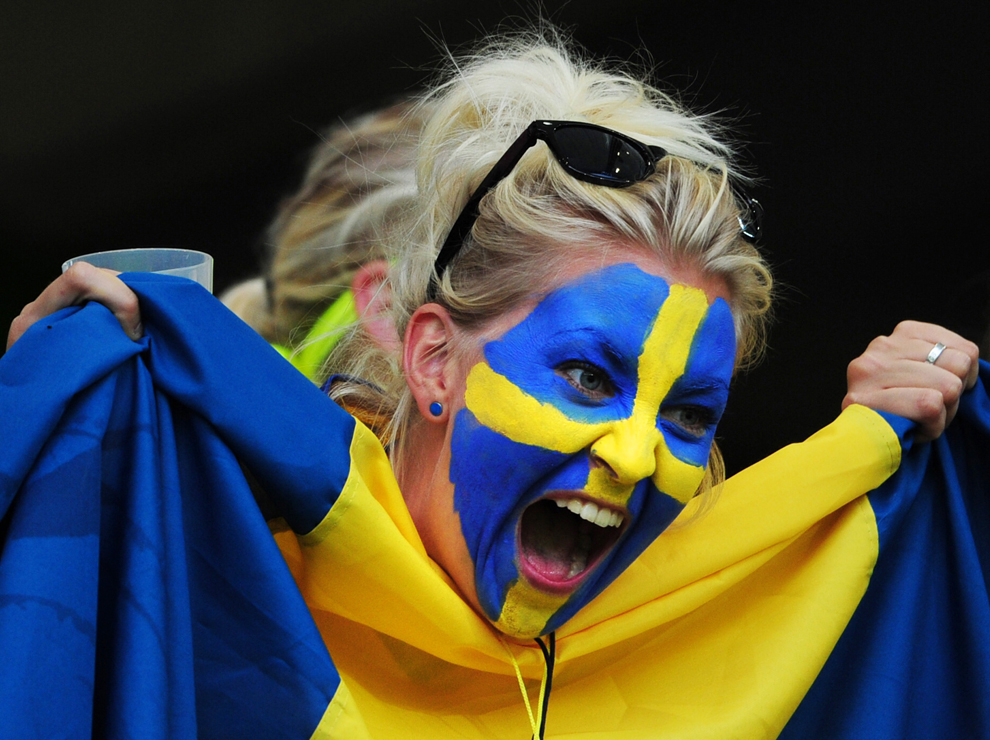 19
A Sweden supporter cheers prior to the Group C match against the US on July 6, 2011 in Wolfsburg, Germany. (Johannes Eisele/AFP/Getty Images) # 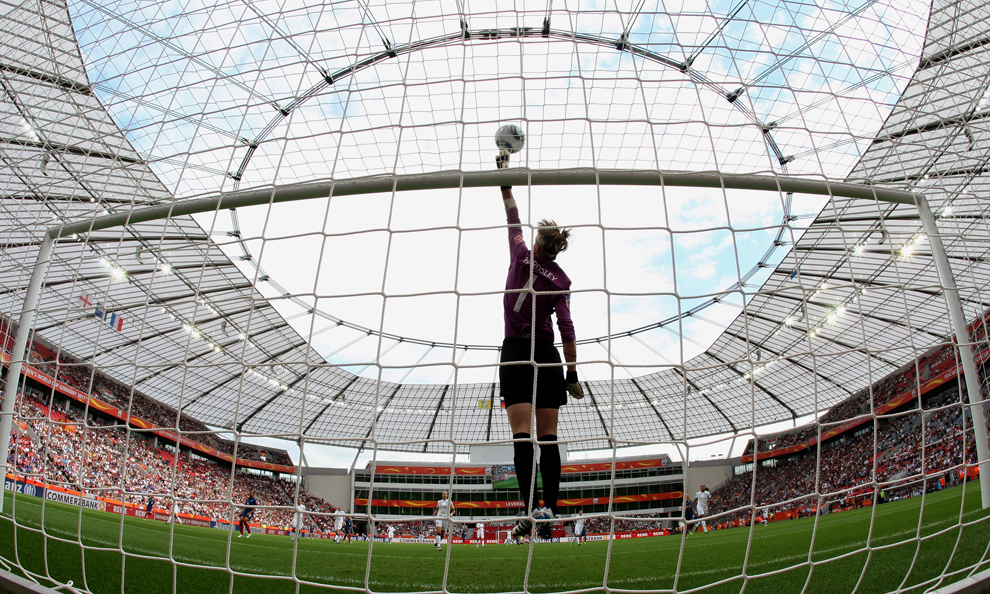 20
Karen Bardsley of England saves the ball during the match against France on July 9, 2011 in Leverkusen, Germany. (Friedemann Vogel/Getty Images) # 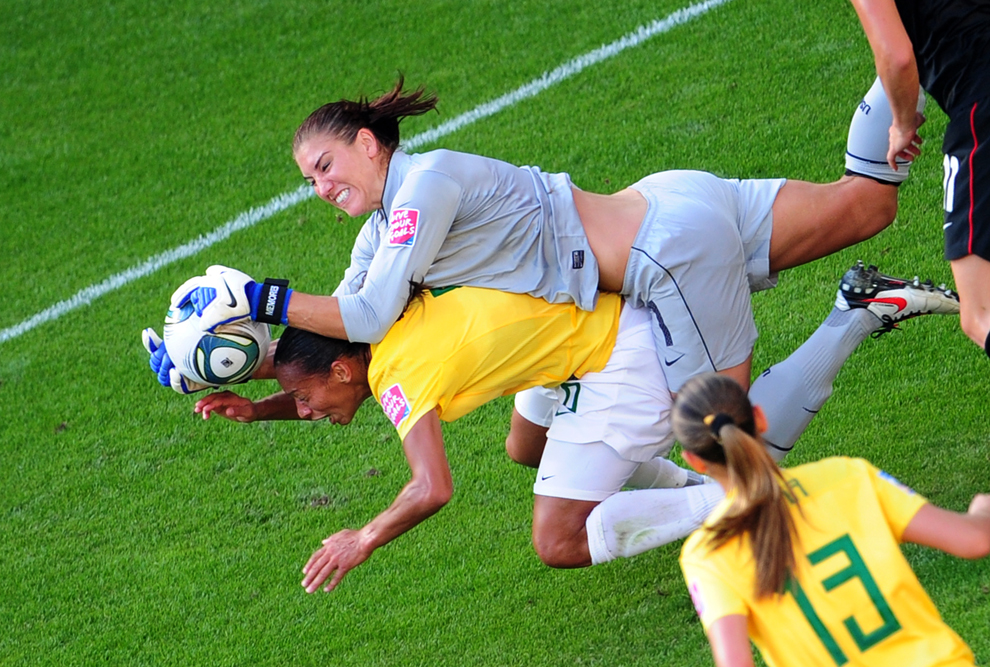 21
American goalkeeper Hope Solo falls on Brazil's defender Rosana as she saves the ball during the quarter-final match on July 10, 2011 in Dresden, Germany. (Johannes Eisele/AFP/Getty Images) # 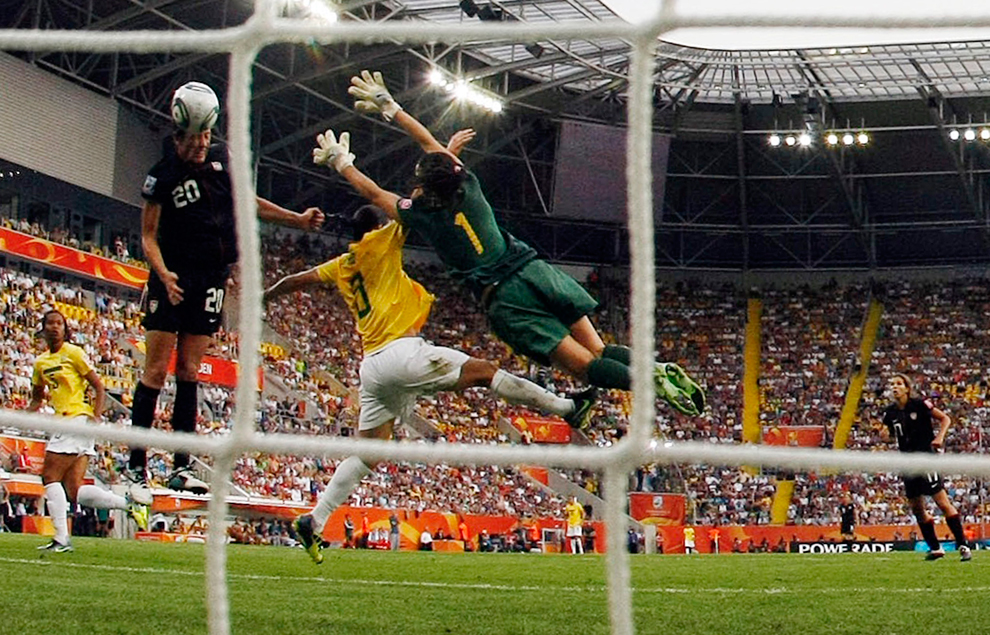 22
American Abby Wambach scores her side's tying goal during the quarterfinal match between Brazil and the United States, sending the game into overtime, on July 10, 2011. (AP Photo/Marcio Jose Sanchez) # 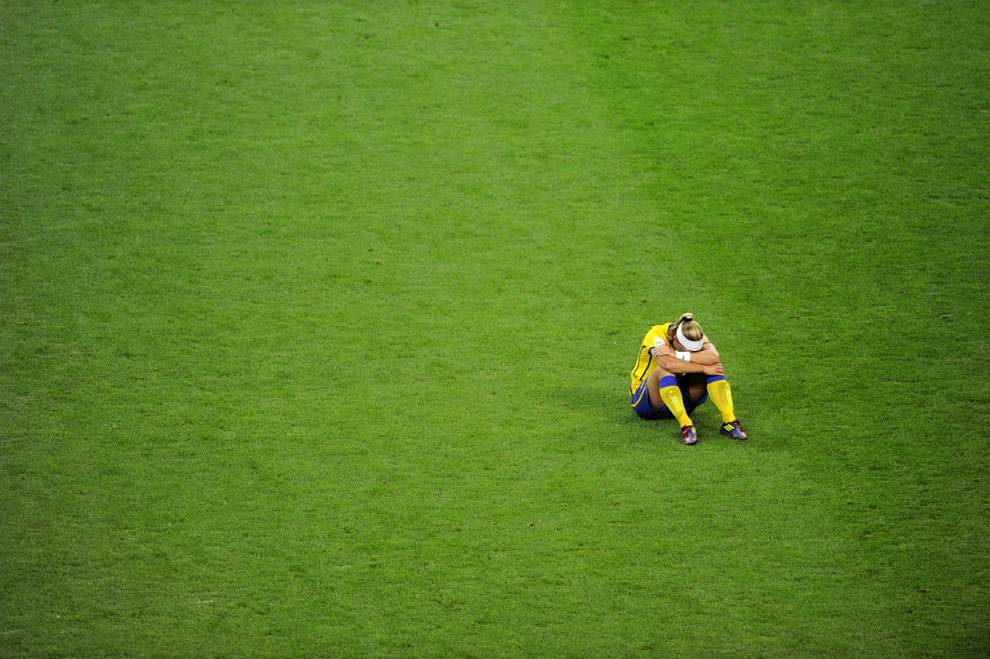 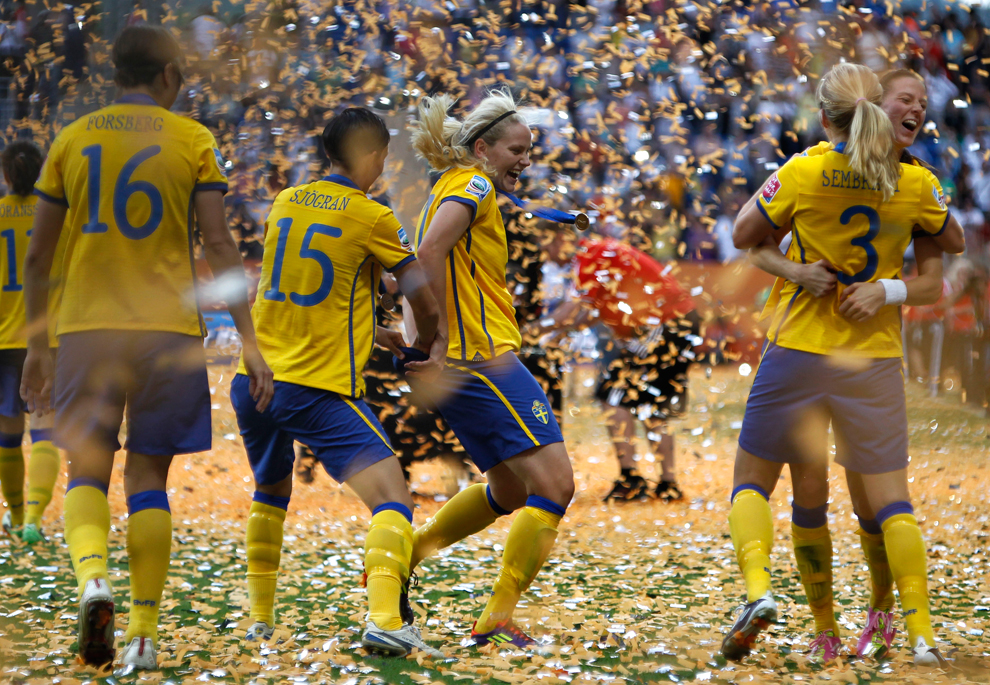 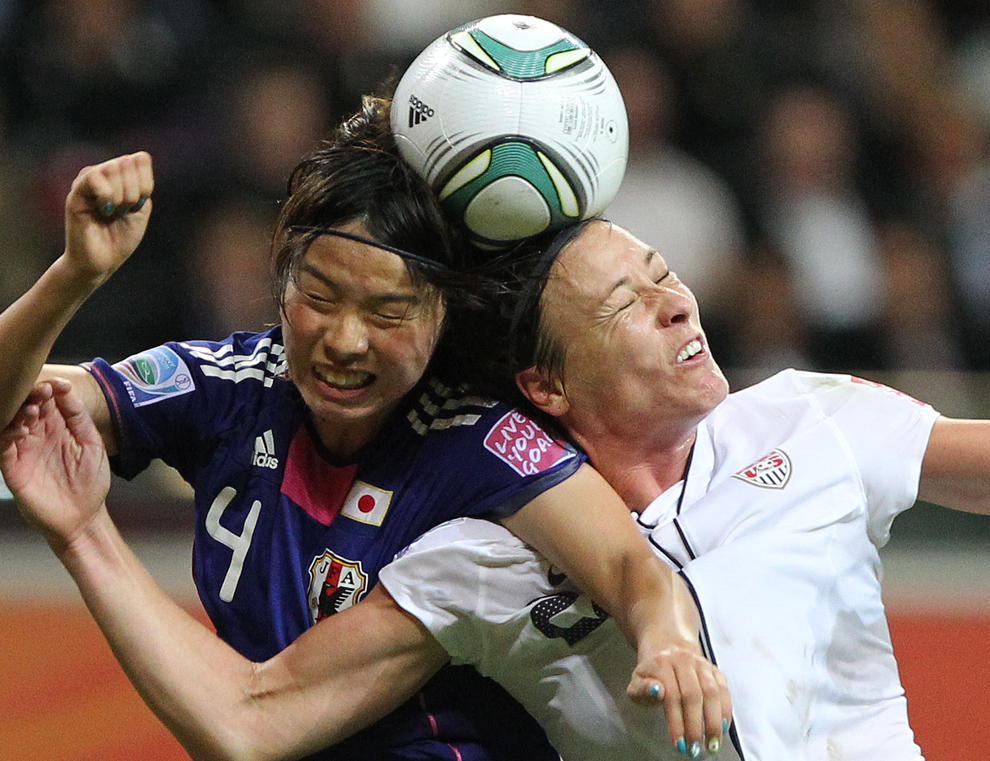 25
American striker Abby Wambach (right) and Japan's defender Saki Kumagai vie for the ball during the final on July 17, 2011 in Frankfurt am Main, Germany. Japan won 3-1 in a penalty shoot-out after the final had finished 2-2 following extra-time. (Daniel Roland/AFP/Getty Images) # 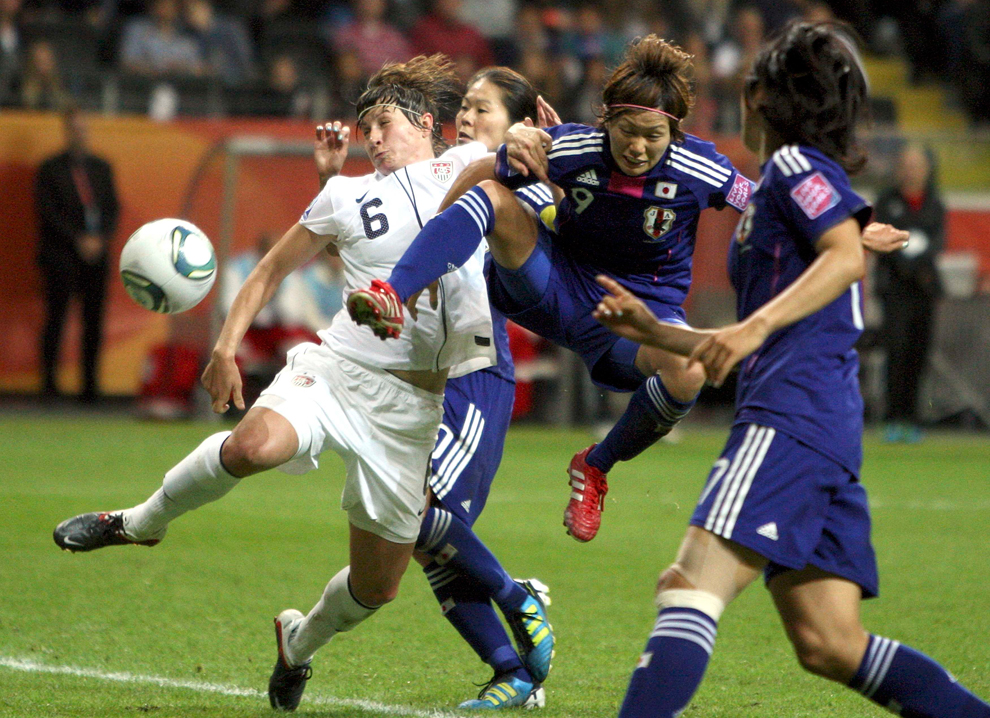 26
Japan's Nahomi Kawasumi (center) is challenged by Amy Le Pielbet of the US during the final match in Frankfurt on July 17, 2011. (Thomas Bohlen/Reuters) # 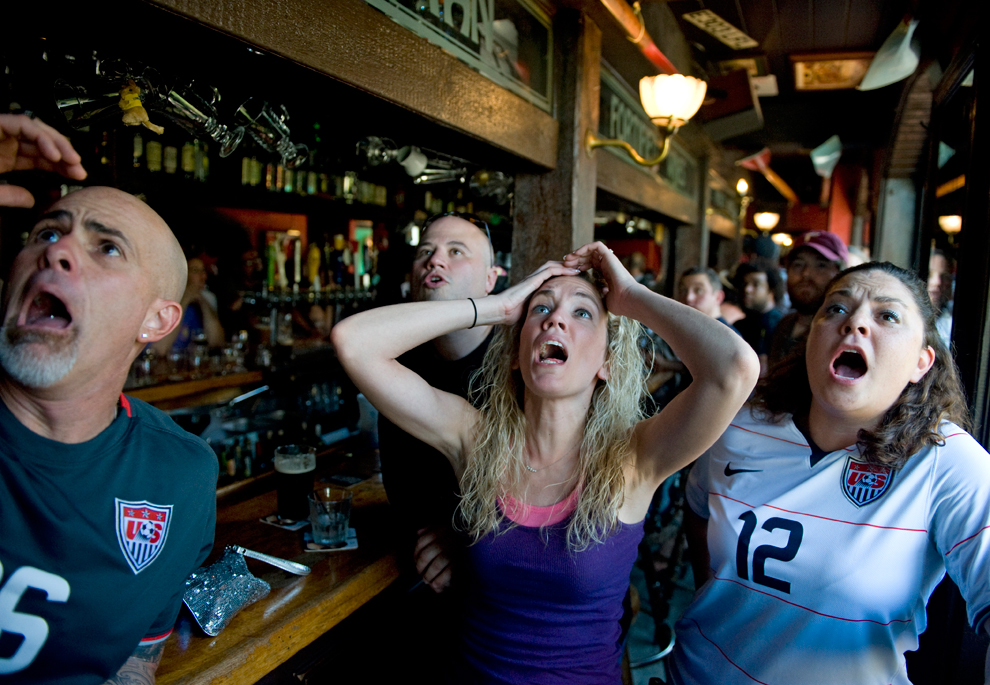 28
American fans watch the broadcast of the penalty kicks in the Women's World Cup soccer final between the United States and Japan at the Dark Horse Pub in Philadelphia. (Jose F. Moreno/Courier-Post/AP) # 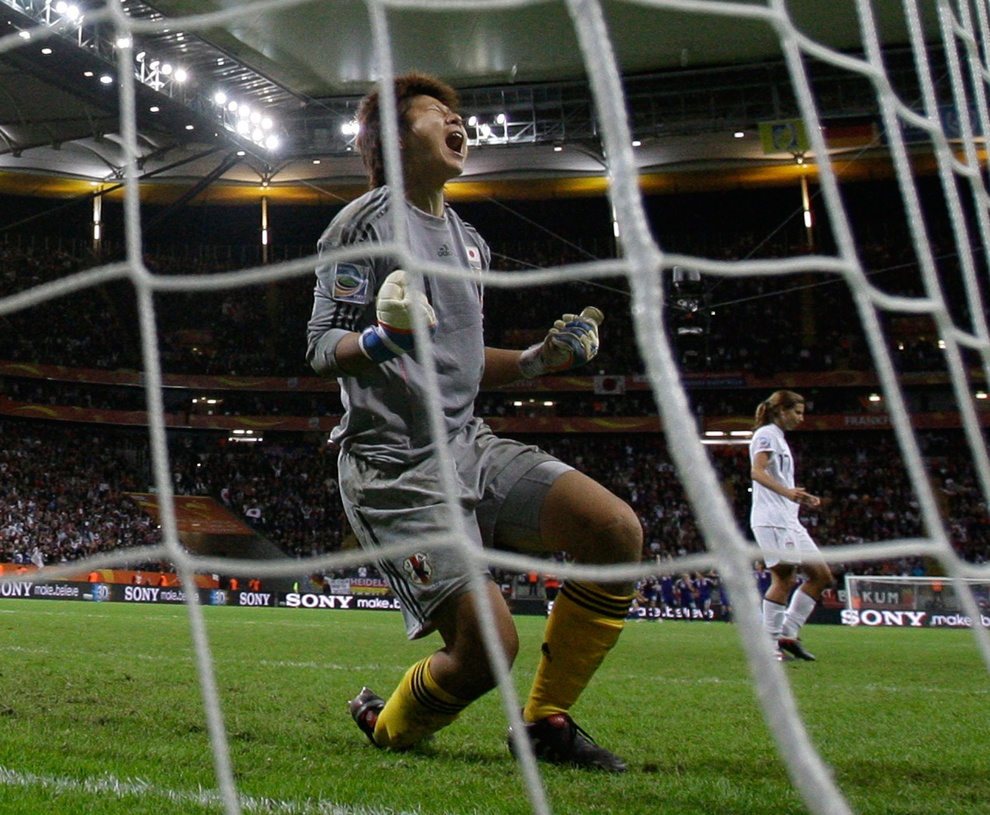 29
Japan goalkeeper Ayumi Kaihori reacts after making a save on a penalty shot during the final match between Japan and the United States in Frankfurt on July 17, 2011. (Frank Augstein/AP) # 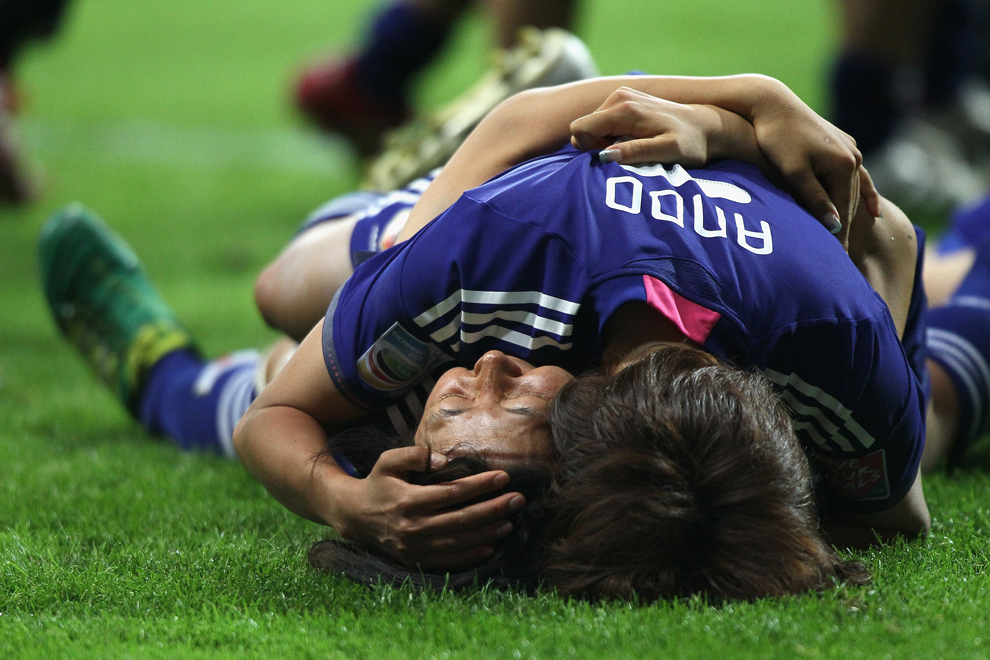