The world has a new nation. The Republic of South Sudan officially seceded from Sudan on July 9, ending a 50-year struggle marked by decades of civil war. After a referendum earlier this year on independence passed with the support of 99% of the population of southern Sudan, events were set in motion that led to Saturday's celebration. Joy marked the festivities, but South Sudan faces steep challenges. Although the country has oil reserves and fertile soil, there is much poverty and little infrastructure. Collected here are images from the last several months, showing scenes of daily life, portraits of South Sudanese, and the celebration of independence. -- Lane Turner (36 photos total) 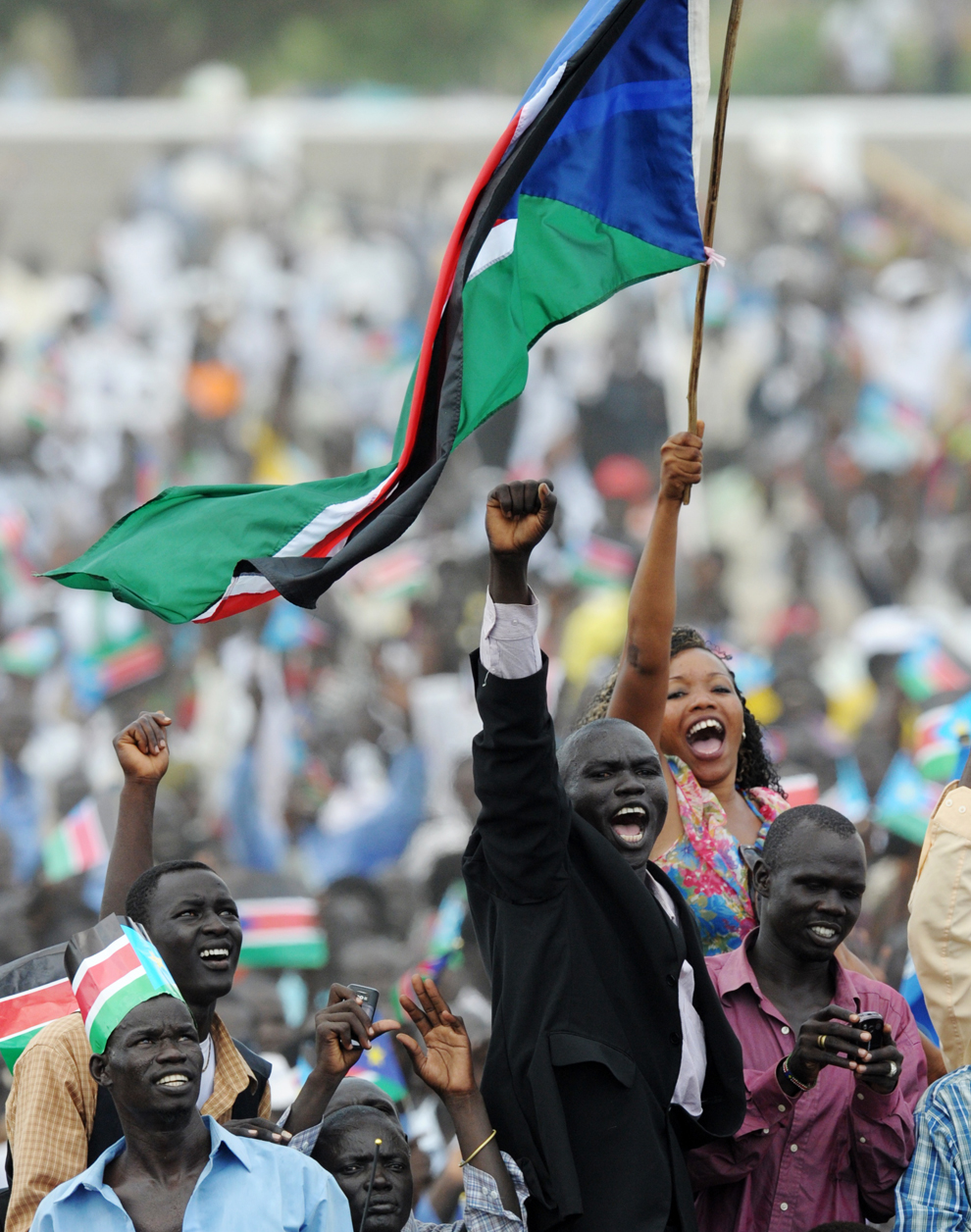 Thousands celebrate their country's independence during a ceremony in the capital Juba on July 9, 2011. South Sudan separated from Sudan to become the world's newest and 193rd nation. (Roberto Schmidt/AFP/Getty Images) 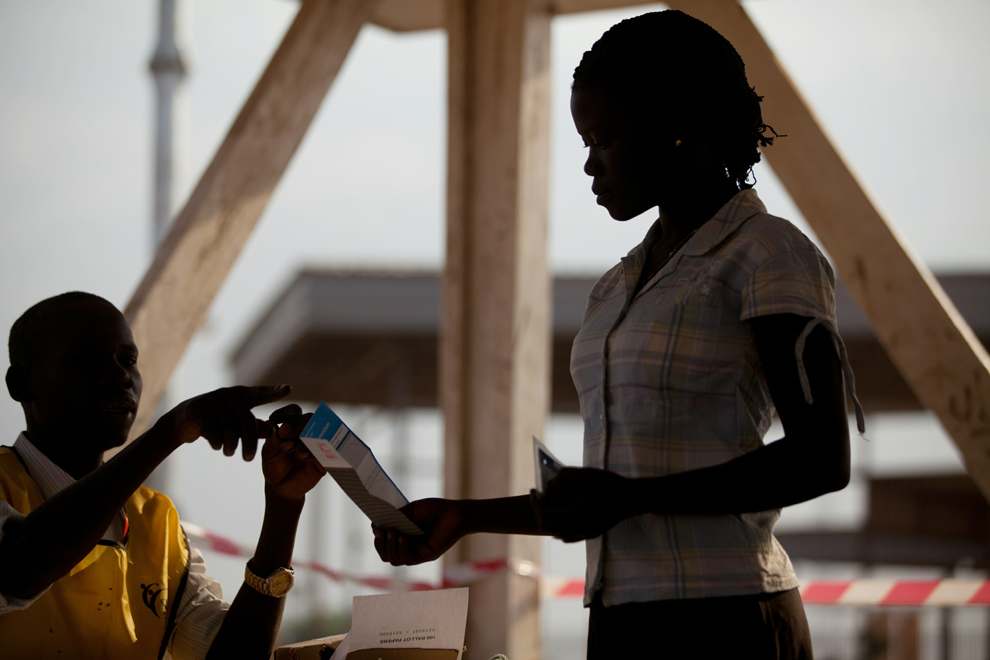 2
A southern Sudanese voter receives an explanation on how to cast his vote on the last day of a week long referendum on January 15, 2011 in Juba. A handful of voters trickled to the polls on the final day of the landmark independence vote that is set to turn the page on five decades of conflict between the mainly Christian and African south and the mainly Arab and Muslim north. (Yasuyoshi Chiba/AFP/Getty Images) #

3
A Sudanese woman holds a cross as she prays during Sunday service in a church in Juba on January 16, 2011, one day after the historical week-long independence referendum vote ended. South Sudan's president Salva Kiir urged his people to forgive the Muslim north for a devastating 1983-2005 war, as thousands flocked to church to give thanks for the landmark vote. (Roberto Schmidt/AFP/Getty Images) #

4
Vegetables are for sale in a market on the first day after the referendum vote January 16, 2011 in the town of Yambio, south Sudan. (Spencer Platt/Getty Images) # 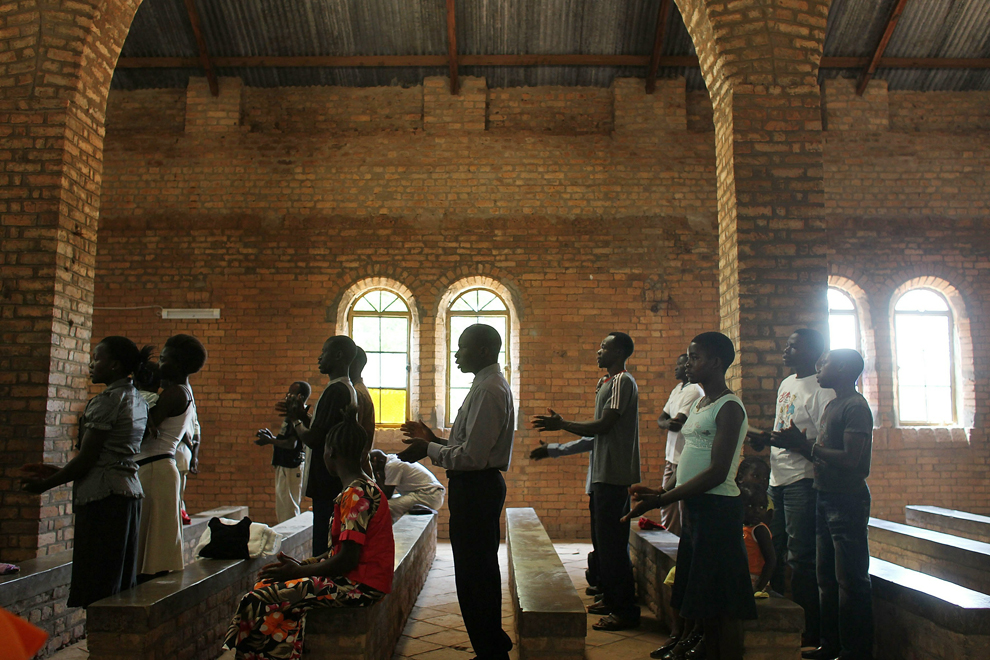 5
South Sudanese attend a Sunday church service on the first day after the referendum vote January 16, 2011 in the town of Yambio, south Sudan. (Spencer Platt/Getty Images) # 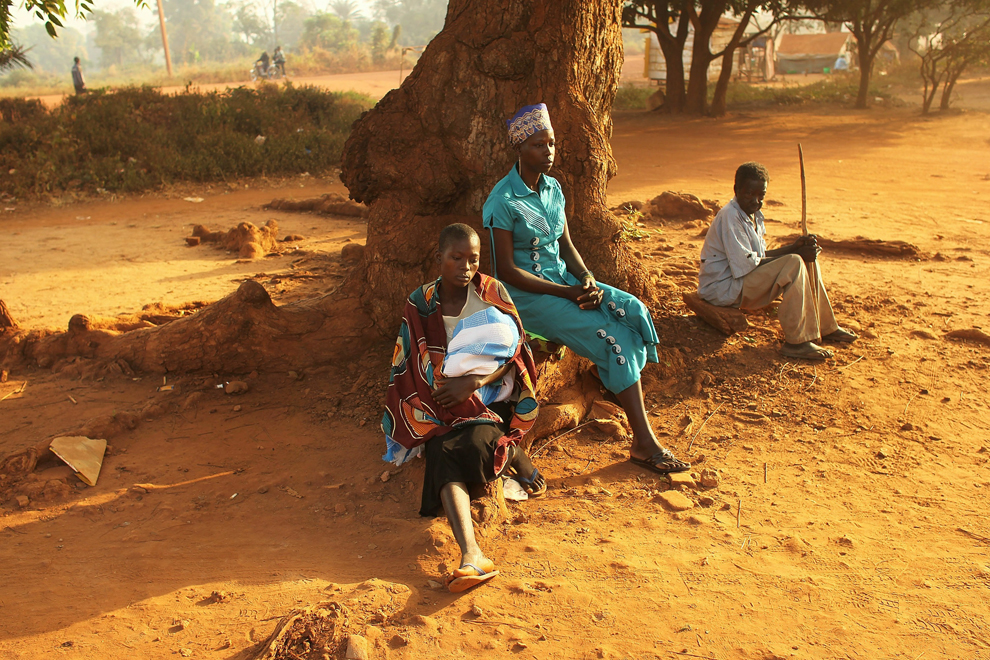 6
People wait to register at a hospital run in partnership with Medecins Sans Frontieres January 17, 2011 in the town of Yambio, south Sudan. (Spencer Platt/Getty Images) # 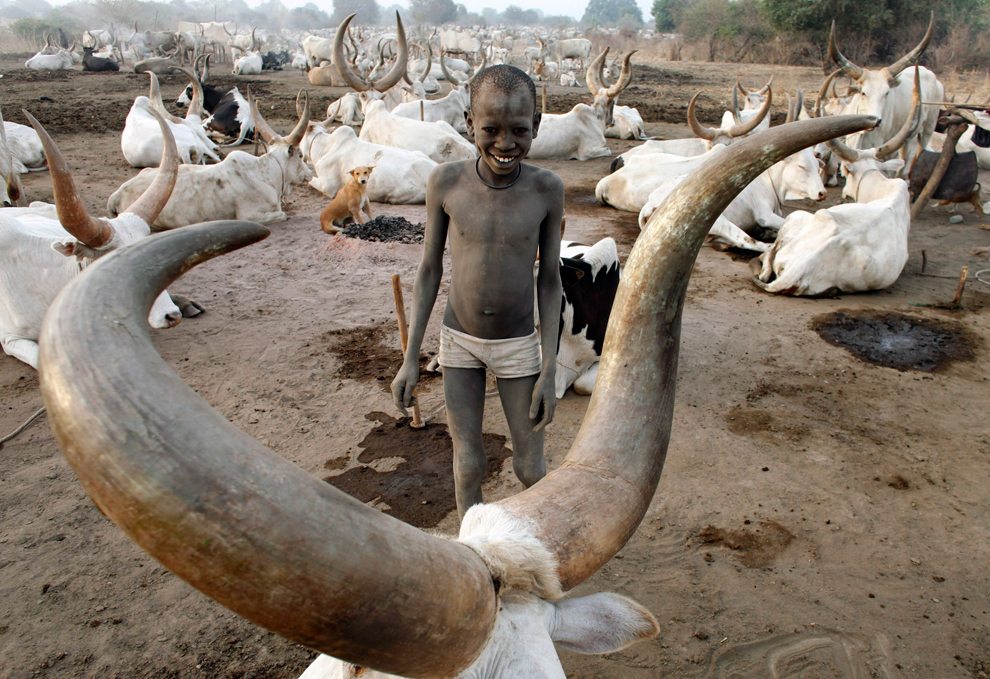 7
A boy from the cattle herding Mundari tribe smiles early morning in a settlement near Terekeka, Central Equatoria state, south Sudan on January 19, 2011. Southern Sudanese voted overwhelmingly to declare independence from the north in a referendum. (Goran Tomasevic/Reuters) # 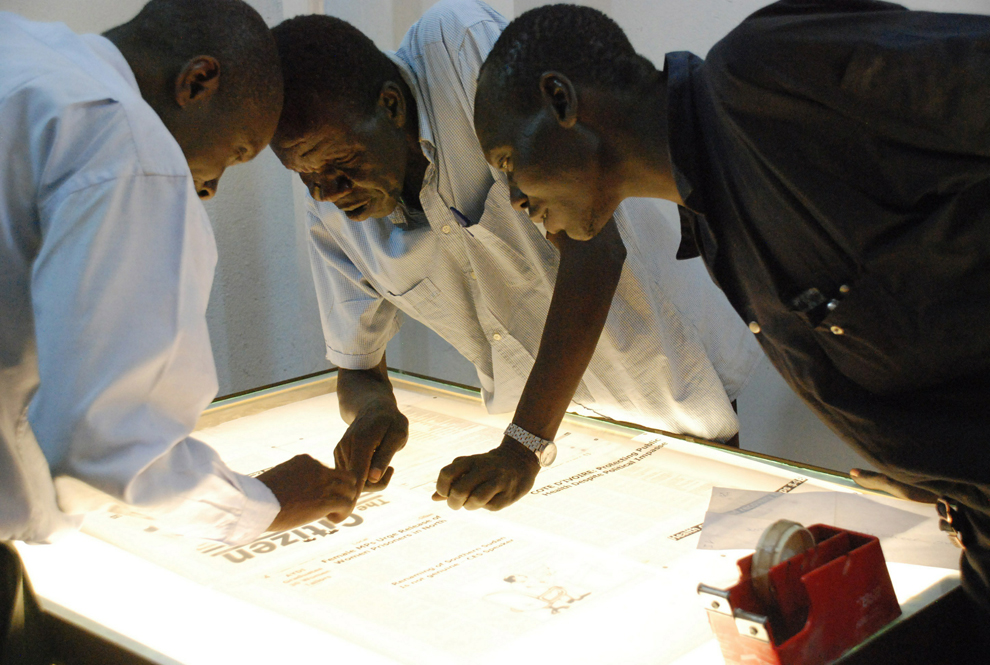 8
The layout team prepares an edition of The Citizen newspaper, an English language daily, at their offices in the southern Sudanese capital of Juba on January 28, 2011. Their French-made printing press produced magazines and books in Belgium for over a decade, but is now relocated to Juba, and is south Sudan's first-ever printing press. (Peter Martell/AFP/Getty Images) # 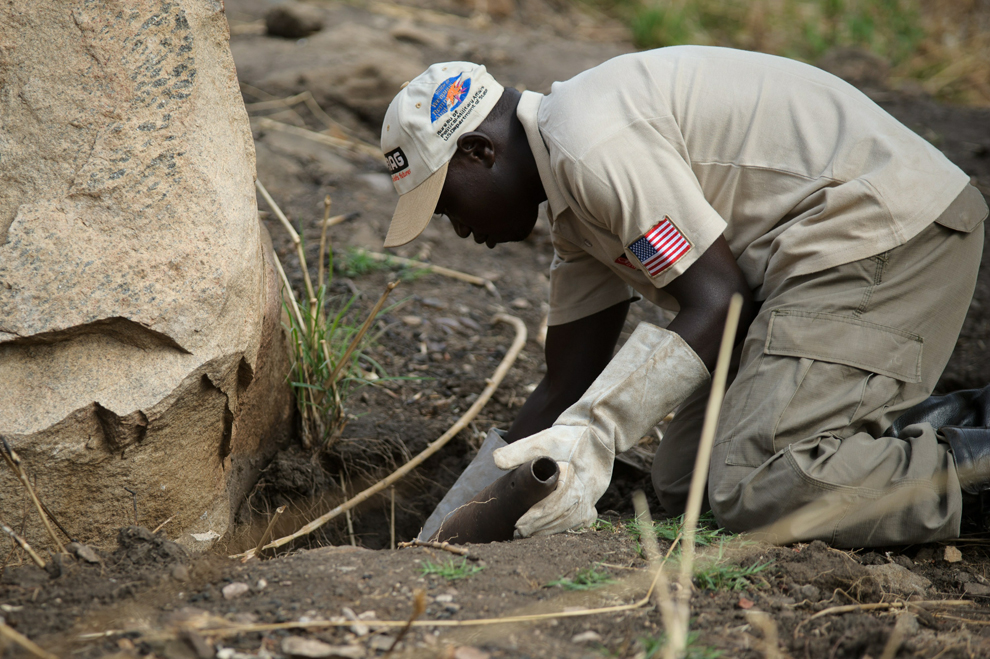 9
Mandela Moses, working for the Mine Advisory Group (MAG), removes a .122 projectile around the Jebel Kujur, a rocky outcrop on the outskirts the southern Sudanese capital Juba on January 24, 2011. Juba is growing fast with returnees, leaving mine clearers with a challenge they face across south Sudan. (Phil Moore/AFP/Getty Images) # 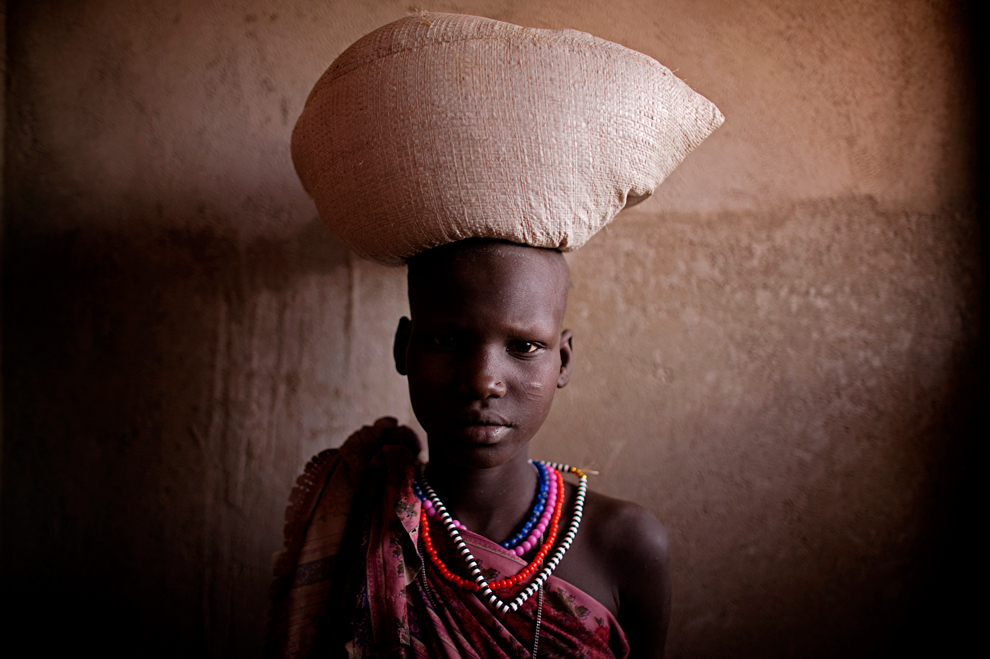 11
Southern Sudanese shop at a market in Aweil, the capital of Northern Bahr al-Ghazal state, on January 29, 2011. Like most south Sudanese, traders in the border states relish the prospect of cutting the umbilical cord with the north but face a daunting readjustment to survive the separation. (Phil Moore/AFP/Getty Images) # 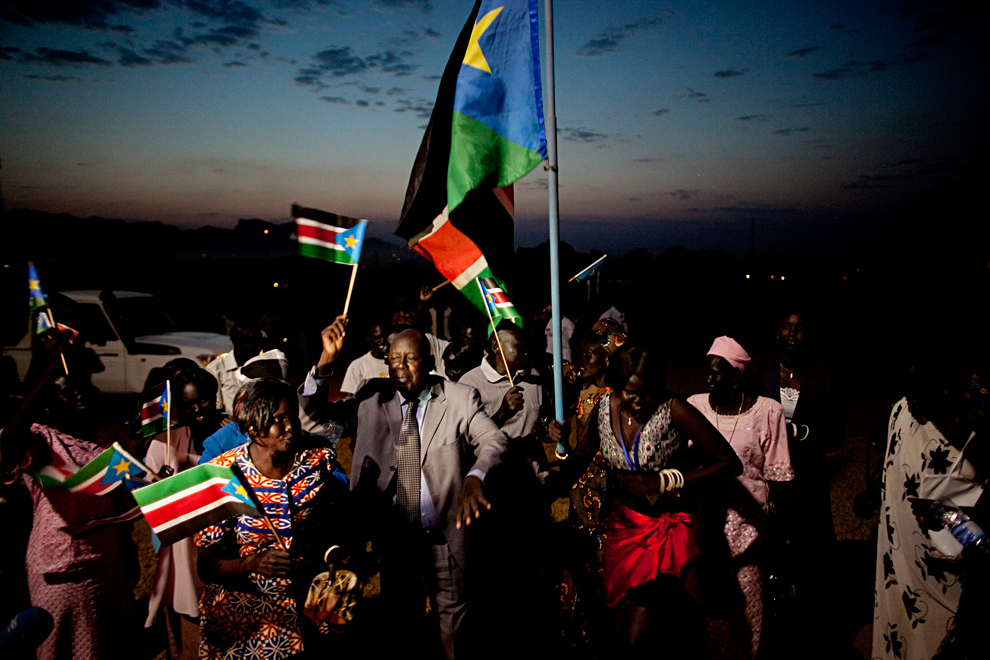 12
Southern Sudanese celebrate the formal announcement of independence referendum results in the southern capital of Juba on Monday, Feb. 7, 2011. Referendum officials indicated that nearly 99 percent of all voters cast ballots in favor of independence. (Pete Muller/AP) # 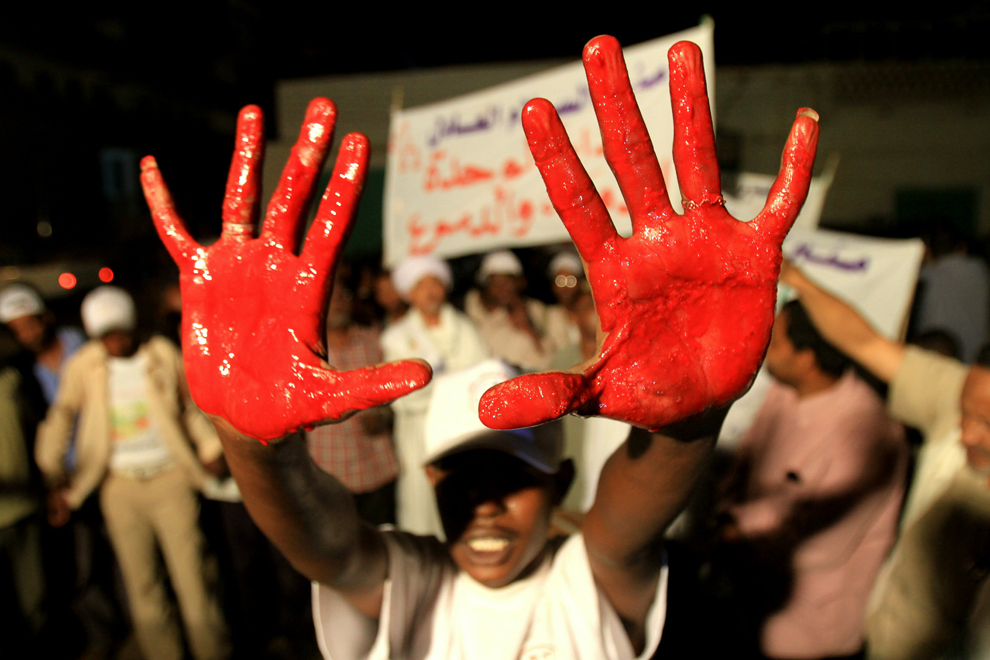 13
A Sudanese man shows the palms of his hands after he dipped them in the blood of a sacrificial cow as he and others celebrate the results of the January referendum on the secession of southern Sudan from the north in the capital Khartoum on February 7, 2011. (Ashraf Shazly/AFP/Getty Images) # 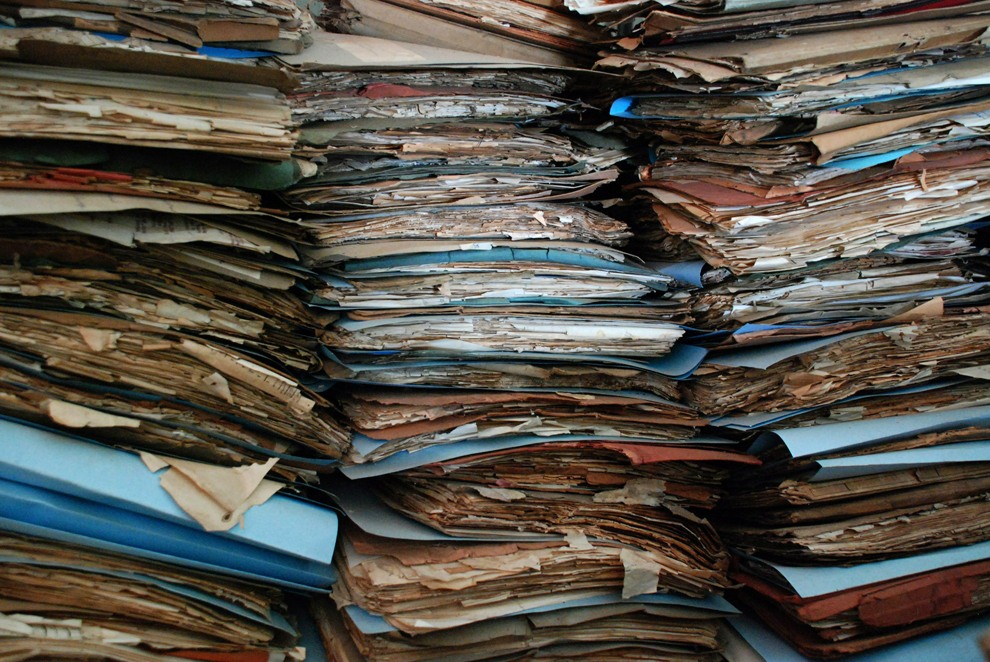 14
Raw documents that make up the history of the world's newest nation to be are stacked and stored in a tent in the southern Sudanese capital Juba on February 1, 2011. The region's historical documents were badly damaged in the war, and many are now stored in this temporary tent while work continues to make digital copies. (Peter Martell/AFP/Getty Images) # 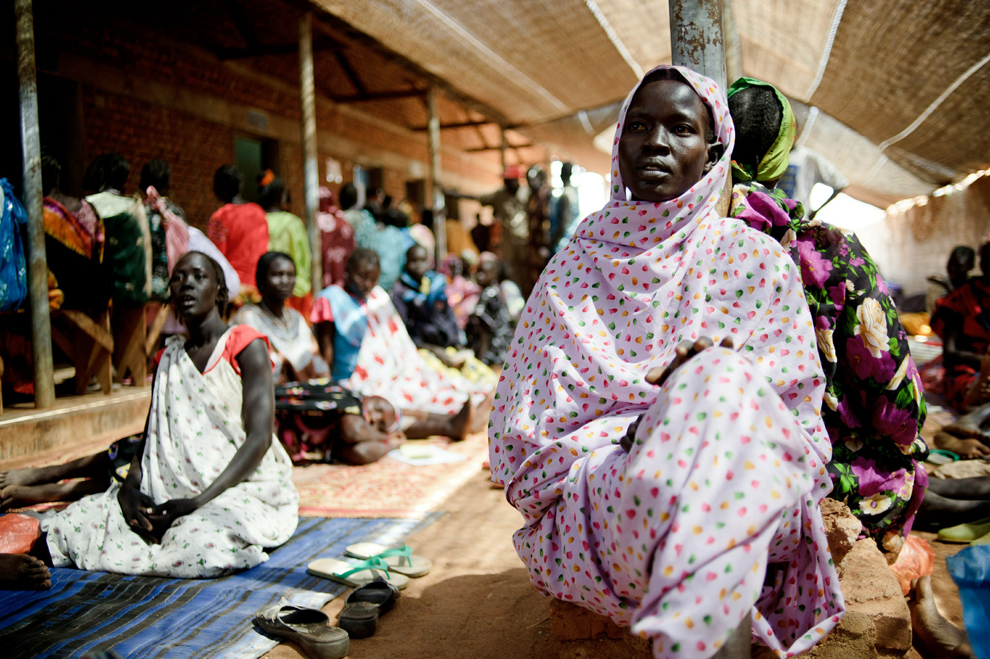 15
Expectant mothers wait for consultation at the maternity clinic of the Medecins Sans Frontieres Aweil civil hospital, the only hospital in Sudan's Northern Bahr al-Ghazal state, on January 26, 2011. The trip to Aweil can take two days by road for some of the most isolated villagers, but according to MSF, access to skilled staff, drugs and equipment have reduced the maternal mortality rate of 14 percent prevailing in the region to just 0.6 percent in the hospital. (Phil Moore/AFP/Getty Images) #

16
Mary Ayok Thil, 22, sits on her bed as she waits to give birth after arriving a month ago at the Medecins Sans Frontieres civil hospital in Aweil on January 26, 2011. (Phil Moore/AFP/Getty Images) # 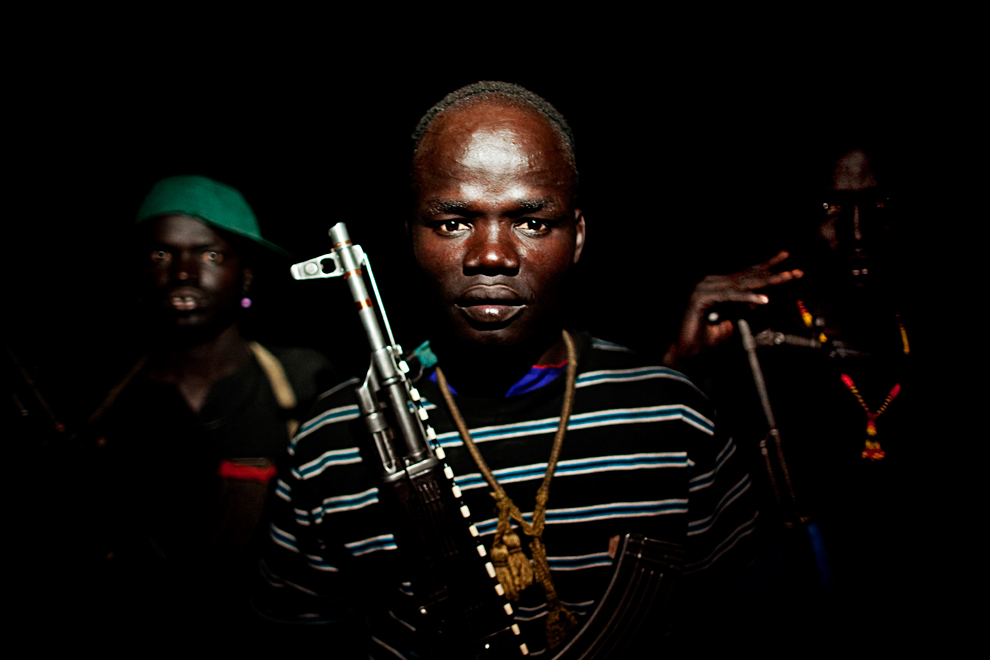 17
Three young cattle keepers from the Dinka Rek sub-tribe pose for a portrait in a remote cattle camp in Wunlit County, southern Sudan on April 21, 2011. As pastoral groups consolidate their herds at scarce water points, the frequency of raiding by other groups increases. The morning after this photo was taken, these and other Rek repelled a violent raid on their herds by a neighboring sub-tribe. The fighting left at least three people dead and several more badly wounded. (Pete Muller/AP) #

18
Father Emmanuel Malau stands inside his church in the village of Mayan Abun with internally displaced children who fled heavy fighting in Abyei on May 26, 2011. Malau spent days scouring the area in his pickup truck looking for young children who struggled to walk from Abyei to safer areas. Tens of thousands fled heavy fighting in the hotly contested border town as the northern Sudanese military took effective control of Abyei. (Pete Muller/AP) # 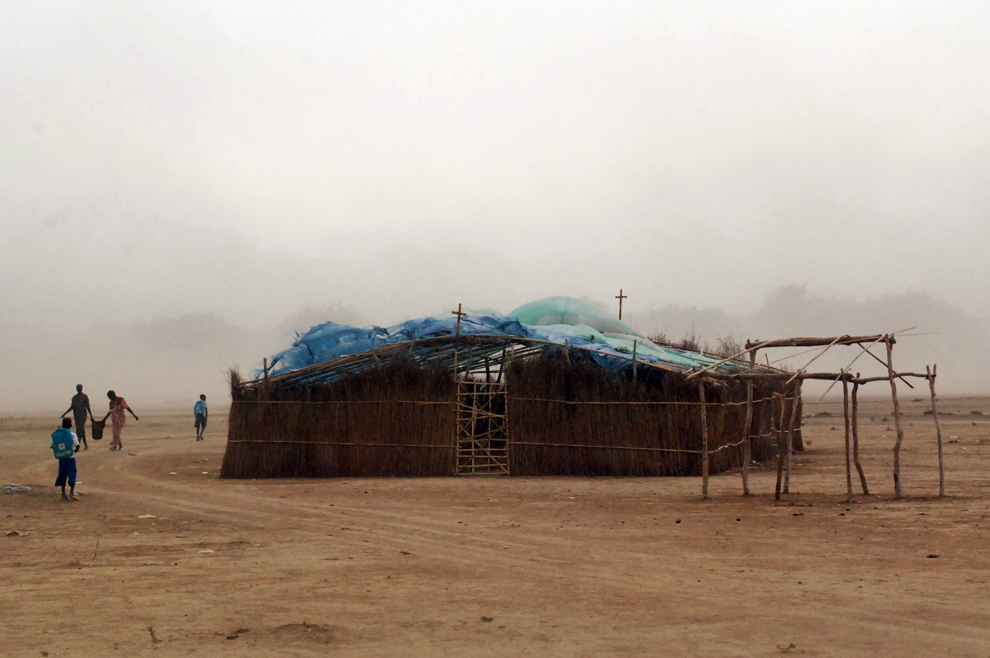 19
Southern Sudanese are seen walking past a makeshift church in the town of Turalei in Sudan's Warrap state, 80 miles south of the flashpoint disputed region of Abyei on the north-south border of the country. (Peter Martell/AFP/Getty Images) # 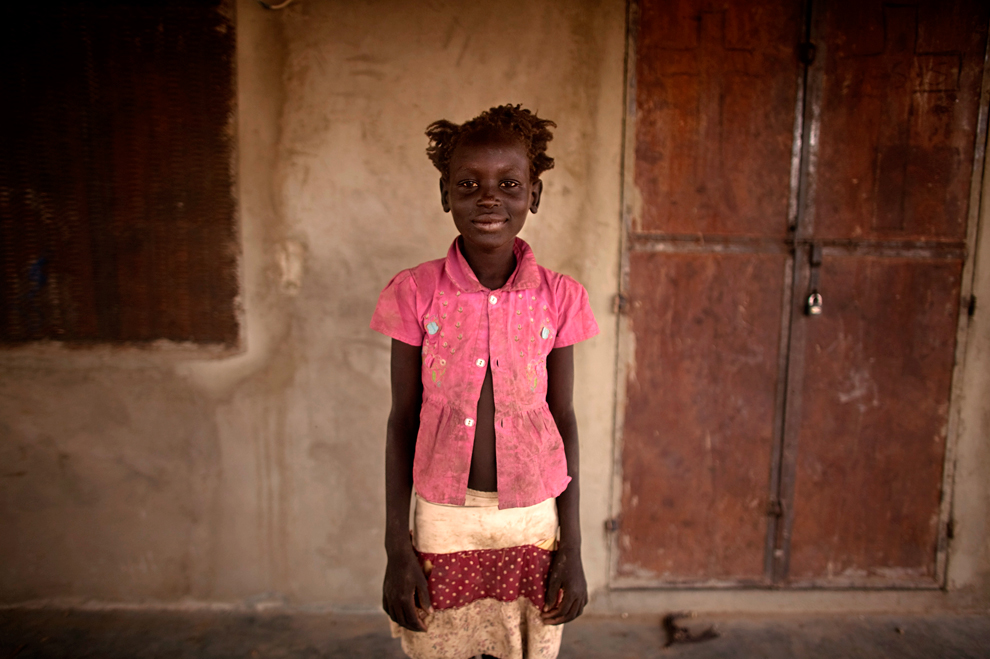 20
A young displaced girl from the town of Abyei poses for a portrait in a makeshift camp in Turalei, southern Sudan on May 27, 2011 after she and her family traveled by foot from Abyei to Turalei, a journey that took over a day. According to local officials in Turalei, approximately 80,000 residents of Abyei have sought refuge. The mass exodus was prompted by a massive northern Sudanese military offensive. (Pete Muller/AP) #

21
Cattle graze near a river forming part of the Sudd swamplands in southern Sudan on June 21, 2011. Vast swamplands cover much of the northern area of South Sudan, and cattle forms a major part of many people's livelihoods, as well as bearing strong cultural significance. (Phil Moore/AFP/Getty Images) #

22
Sudanese women walk to and from the town of Pariang in south Sudan's Unity State in search of food for their families after fleeing their hometown Jau on June 23, 2011. Families fled when the remote border town of Jau was targeted by army bombings. (Phil Moore/AFP/Getty Images) # 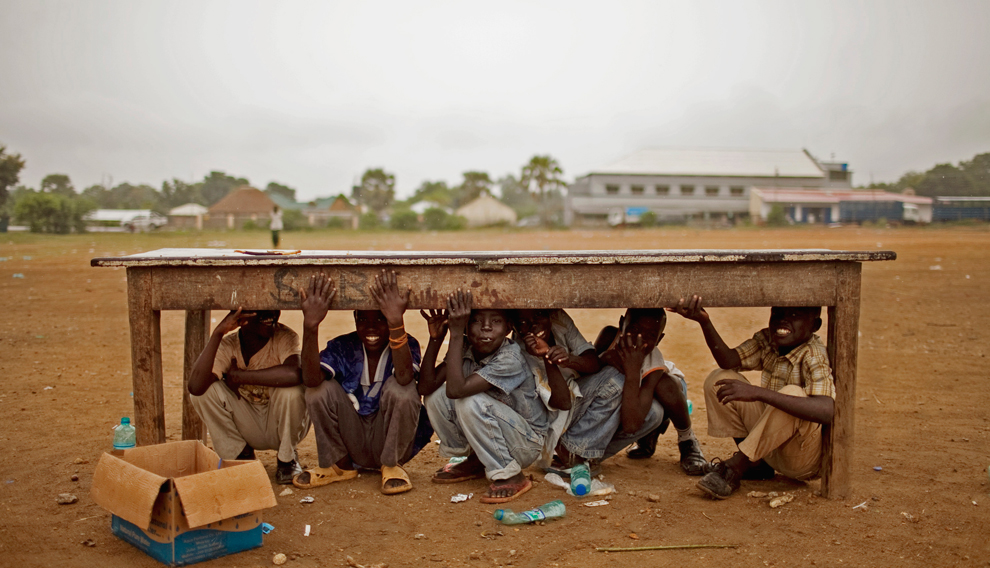 24
Southern Sudanese boys take shelter from afternoon rains that disrupted a rehearsal for independence day celebrations in the capital city of Juba on July 4, 2011. (Pete Muller/AP) #

25
A Sudan People's Liberation Army soldier stands in line during a rehearsal of the Independence Day ceremony in Juba July 5, 2011. (Goran Tomasevic/Reuters) # 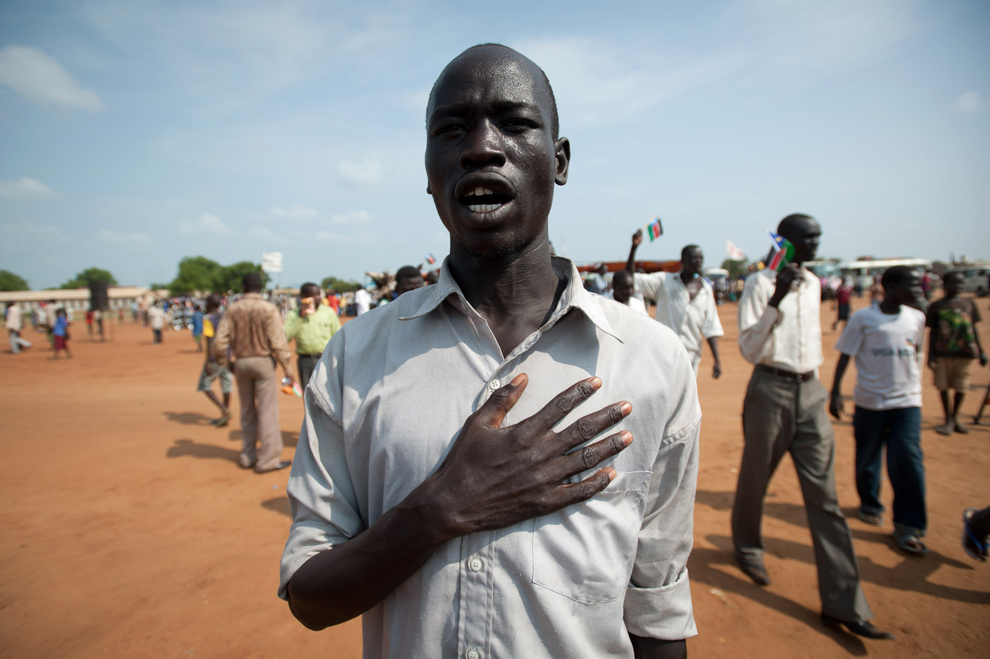 27
Women purchase grilled chicken from a street vendor in the main Konyo Konyo market in the southern Sudanese capital of Juba on July 6, 2011. (Pete Muller/AP) # 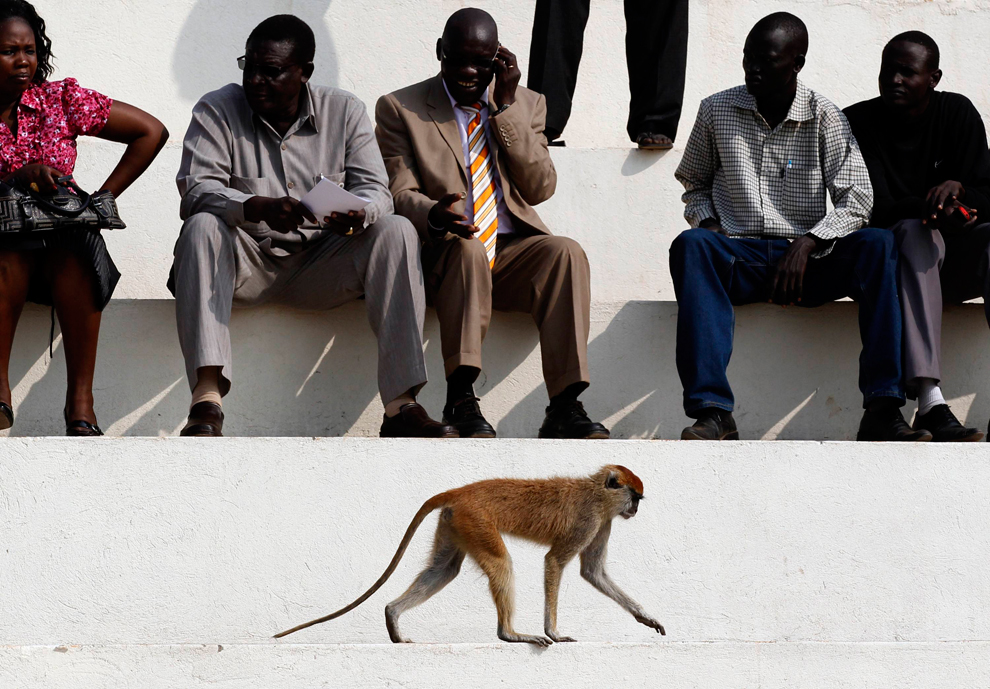 28
A rehearsal of the Independence Day ceremony attracts a visitor in Juba on July 7, 2011. (Goran Tomasevic/Reuters) # 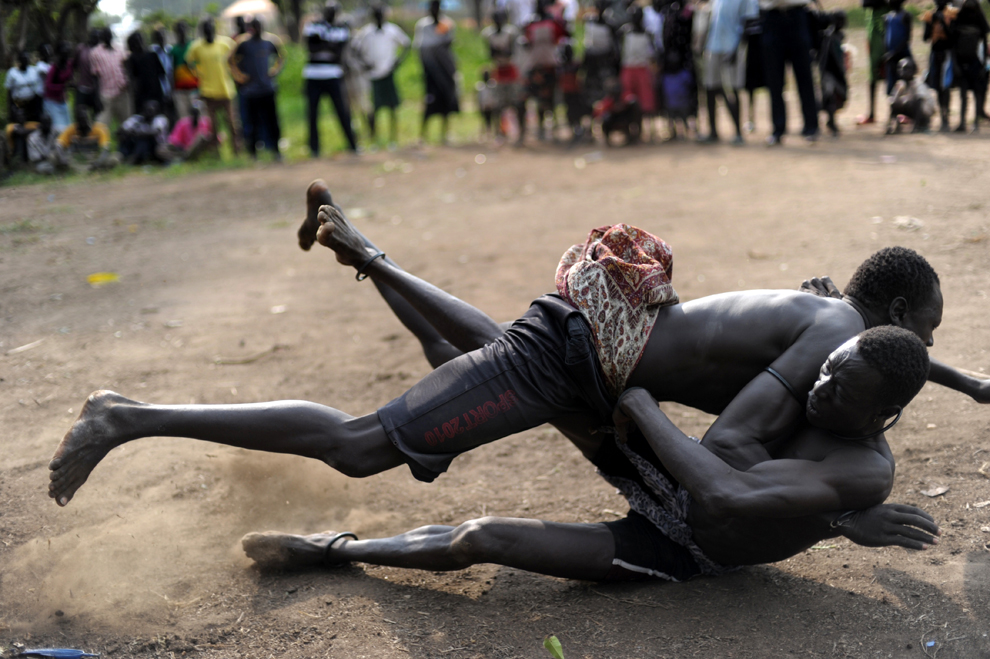 29
South Sudanese members of the Mundari ethnic group wrestle where the tribe brought cattle and sheep for sale in Juba on July 7, 2011, two days before South Sudan secedes. The Mundari are cattle keepers who live in the south and pride themselves in being good wrestlers. (Roberto Schmidt/AFP/Getty Images) # 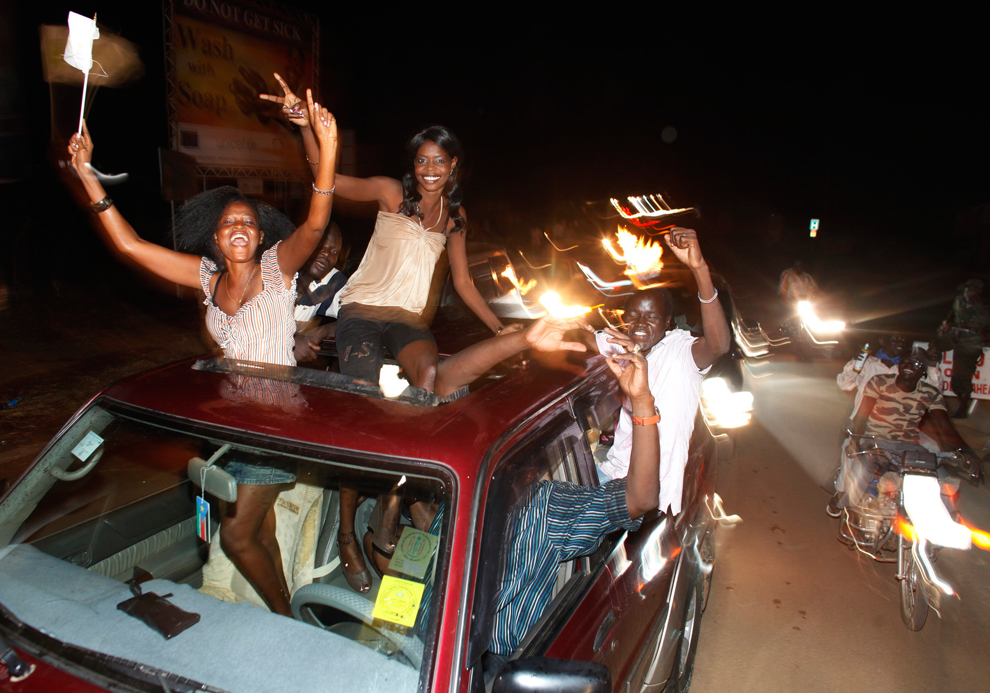 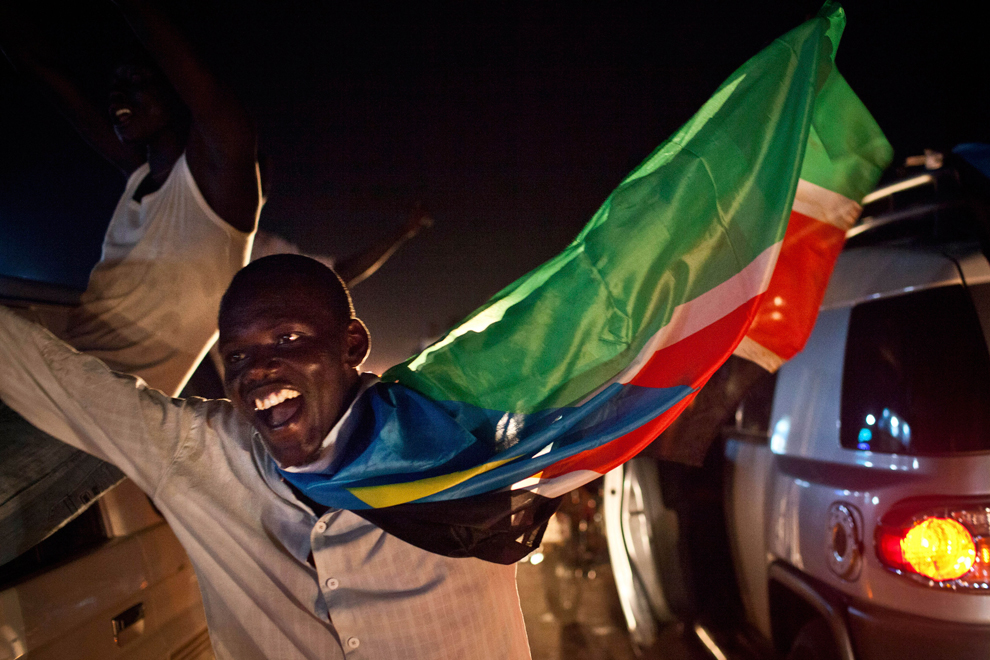 32
A man runs through the streets waving a South Sudan national flag in celebration of the country's independence in Juba, South Sudan, late July 8, 2011. South Sudan became the world's newest nation early Saturday, officially breaking away from Sudan after two civil wars over five decades that cost the lives of millions. (Andrew Burton/AP) # 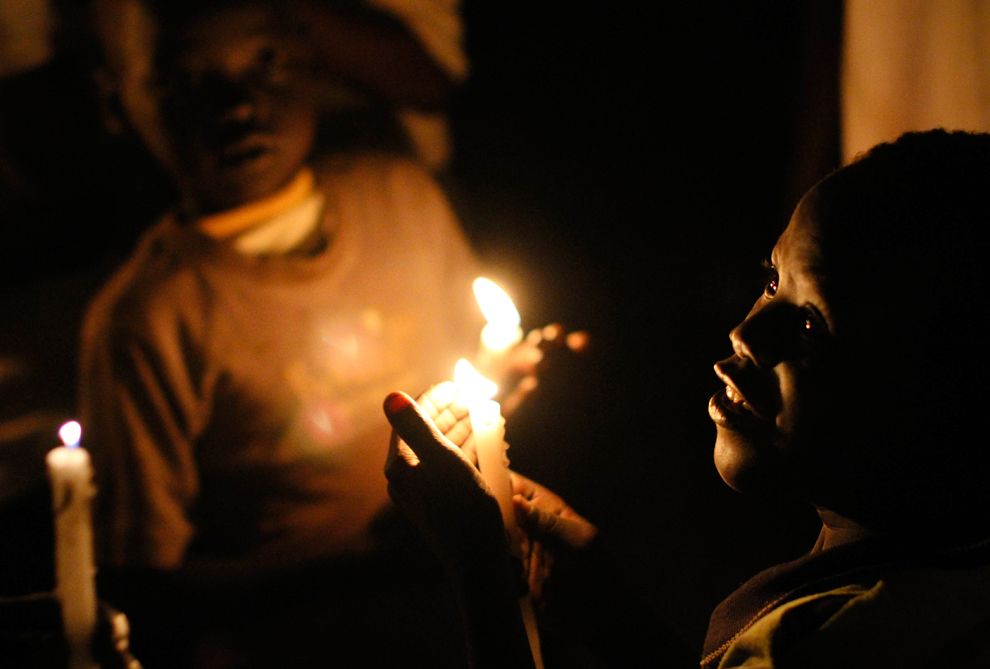 33
South Sudanese boys hold candles as the clock ticks over to midnight on July 9, 2011 to mark the day that South Sudan will officially declare independence from the north in Juba, the capital of the Republic of South Sudan. (Marc Hofer/AFP/Getty Images) # 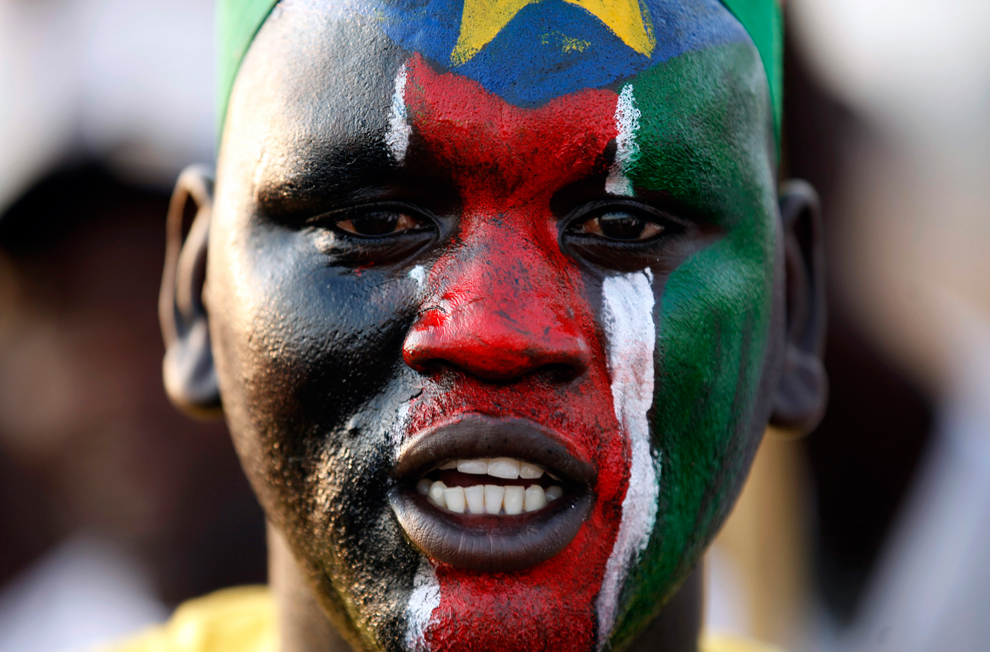 34
A man with his face painted in the colors of the South Sudan flag attends the Independence Day ceremony in Juba July 9, 2011. Tens of thousands of South Sudanese danced and cheered as their new country formally declared its independence on Saturday. (Goran Tomasevic/Reuters) # 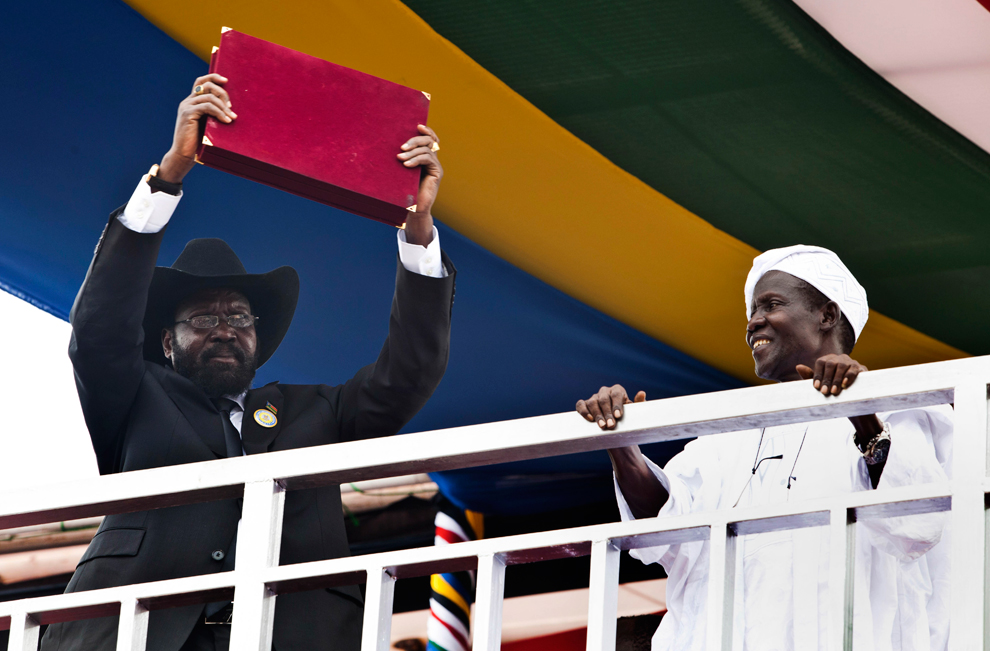 36
South Sudan President Salva Kiir lifts South Sudan's new constitution above the crowds of people attending an independence ceremony in Juba, South Sudan, on July 9, 2011. South Sudan celebrated its first day as an independent nation Saturday, raising its flag for the first time before tens of thousands of cheering citizens elated to reach the end of a 50-year struggle. (Andrew Burton/AP) #