Victory Day, May 9th, marks the surrender of Nazi Germany to the Soviet Union in the Second World War. It was first begun in the fifteen republics of the Soviet Union following the signing of the surrender document late in the evening on May 8, 1945, but already after midnight by Moscow time, thus May 9th. During the Soviet Union's existence, May 9th was celebrated throughout the USSR and in the countries of the Easter Bloc. The war became a topic of importance in cinema, literature, and history lessons at school, the mass media, and the arts. After the fall of communism in Central and Eastern Europe, most former USSR countries retained the celebration. In Russia during the 1990s, May 9th was not celebrated massively, because Soviet-style mass demonstrations did not fit in with the way the liberal power base in Moscow communicated with the countryâs residents. Things changed when Vladimir Putin came to power. He started to promote the prestige of the governing regime and history, national holidays and commemorations all became a source for national self-esteem. Since then Victory Day in Russia has increasingly been turning into a joyous celebration in which popular culture plays a great role. -- Paula Nelson (47 photos total) 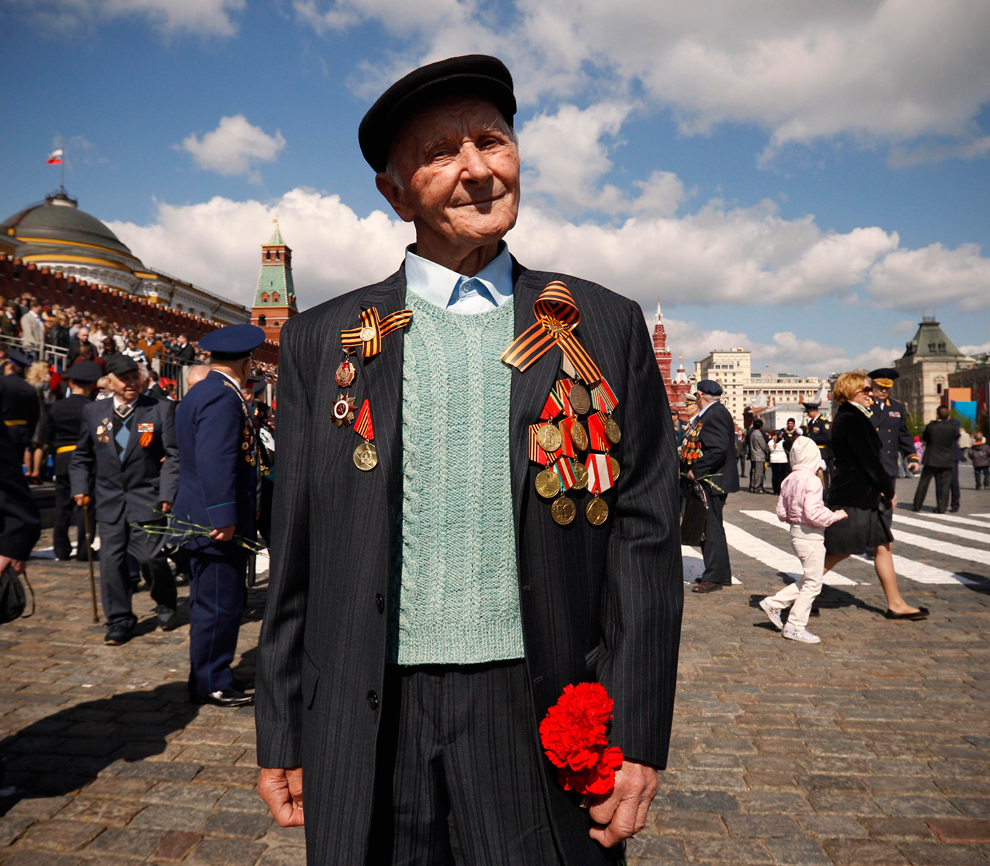 Moses Mokvin, 86, a World War II veteran stands in Red Square after the Victory Day Parade, which commemorates the 1945 defeat of Nazi Germany in Moscow, Russia. Tens of thousands of granite-faced soldiers marched in lockstep across Red Square in Russia's annual Victory Day display of military might. The parade, marking the surrender of Nazi Germany in World War II, is the centerpiece of Russia's most solemn secular holiday, both commemorating the Soviet Union's enormous sacrifices in the war and asserting the potency of its modern military, May 9, 2011. (Alexander Zemlianichenko/Associated Press)

I love this album and the girl cadets are really hot in Russia, danngg

Waited to see how long it took for an idiot to diminish the moment with a comment about the Police ladies...2nd poster I guess.

Its a bit strange, how Russia's part in the war is often overlooked in many forms of western media.

On the other hand, the western part in the war is often overlooked in many forms of the russian media, so were all even :P.

one of best albums in a long time. So lively and emotional pictures - just great!!!

Thank the Russian veterans for their sacrifices. Without them, D-Day landings would be much harder and bloodier.

!Salute from a younger generation.

#19 please arrest me!
#28 the real side of this celebration: drunk old men with costumes having fun...

Living history....Imagine what they experienced back in the 40's
Awesome pictures though.

Greetings from Germany - we never will walk alone

Sadly, an event that is not so glamorous for the citizens of the countries that got "saved". Only pain filled memories of their loved ones who got taken away from them as the takers joyfully celebrate this exact event in front of their eyes.

Sacrifice of millions of Russians turned into pro-military propaganda. Pictures are pretty but celebrations were filled with hollow chest-beating nationalism and consumption of vodka.

With all my heart, THANK YOU!
De tout mon coeur, MERCI !

Excellent images, they lost so many lives.

#47 very sad, hope he found someone

Veterans of the Iraq war, will be ever celebrated like the Russians honor their veterans !?

nice to see they celebrate the victory day...

Lovely to see an album with JOY after the last few dark subjects ! Thank you

I absolutely LOVE the look of the guy on #9. Numbers 30 et 33 are not bad either!
Napoleon said in 1802, before creating the Legion of Honor (still today France's top decoration): "It is with trinkets that manking is governed". Some people here have quite a few "trinkets"!

Why can't we have sweet military parades likes this in the USA?

It makes a country proud!

Look how smug the little toy soldiers are looking in with their uniforms and guns. And goose stepping police officers? Maybe they should do something about the corruption in their own organization.

I might be mistaken, but I'd say blue berets on #43 mean that those are VDV - Russia's Airborne Troops.

"A deomcratic, modern and self-confident state wont need all that parading and showing off weapons. Its ridiculous.
If you have nothing else, show off your big gun... alright. They just do it, because they know they are weak actually."

I just want to make a short comment to this statement - Parade is a tradition and nobody tries to show off in front of other countries...this is the way our veterans celebrated this day 66 years ago and no one will change this tradition. Don't judge a book by its cover!

Picture 11 is heavily Photoshopped (the background). The images should be held to a higher standard.

Exceptional! They look so happy and full of pride.

@Roman
Lovely words. I agree with your sentiments. Here in Australia, we celebrate Anzac Day from WW1 (amongst others), and while there are no Anzac veterans alive now, the march and what it stands for are very well supported by young people who want to keep the memories alive.

What moron put the captions on those photos?

"Kiev" on a tomb! It is a marker for "Hero City" Kiev the capital of Ukraine. Did not know it was dead...

Russian marines wear black uniforms and berets, not all green. Do not want to waste time pointing out other mistakes.

I sort of thought your publication was a news organization. Next you will report of parking space shortage on parkways.

Slaves of the machine...the frameworks changed

This is not militarism, it is pride, honor and tradition. Makes me proud to be Russian. Happy Victory Day!!!! Slava geroiam!!!

Look again, Vince (49). Or read, rather. There is an "eternal fire" burning below left, which surely accounts for the distortions you see.

I read a historical account of the Siege of Lenningrad. Chilling. What they went through in just that one city gives them the right to celebrate.

I always feel pain in my heart looking at our veterans. They are getting older and fewer every year. After so many horrors of war not many left who suffered the most, my grandfather, who was a partisan (guerilla) at that war, he was 16 at the time the war started, lived just over 50, the same with his wife, my grandmother. And i feel even more pain thinking that more soldiers are raised still and they are still being send to war, though, thankfully, less than before. It's a great day for that was a great victory of the nation that successfully defended itself at an immense cost. I hope it's real meaning will not be forgotten (for it seems it is being transformed now). (I am Russian)

I'm very proud to be the part of this country! It is the Greatest day in our history, and I feel myself very angry with idiots who posts comments like:

"If you have nothing else, show off your big gun... alright. They just do it, because they know they are weak actually."
You do not know anything about this War! Can you imagine 12 (and much more) millions of people who died in this War?
So please think before you type!!!

#47 is a sad, a strong picture.
Unfinished thanks and respect to all these people who liberate us from the nazi terror. We are proud of your bravery.
Thank you very much.

Only dude in picture No. 19 ruined an awesome depiction of Russian Hotness.

These photos made me teary and made me miss my grandparents. The last photo is just a reminder of how the generation of the people who went through the war with all their hopes, dreams and strength is dying out. What our grandparents went through during the war has not been repeated ever since-- they deserve all the honor and celebration.
Happy Victory Day!

While those few countries - Belarus (especially), Ukraine and to a much lesser degree Armenia, Bulgaria and Kyrgyzstan - may be happy to celebrate it as a way of paying tribute to their current Russian masters, it should be noted that Poland, Latvia, Lithuania, Estonia, Slovakia, the Czech Republic, Hungary, Slovenia and others that spent nearly 50 wasted years under the Soviet yoke did not celebrate and will not.

God Bless all those who gave their lives for our freedom!

@49 - "Picture 11 is heavily Photoshopped (the background)." - are you sure? It could be hot air from the fire roiling around producing that effect.

"Picture 11 is heavily Photoshopped (the background). The images should be held to a higher standard."

I have as much respect for the Russian soldiers and the soldiers from the USA and any other country that fought to rid the world of Hitler. The sad part in all of this is the world is still consumed by war.

Picture 11 is not Photoshopped. It is the distortion caused by the hot air coming from the Eternal Fire, which the subjects are standing next to, which you would know if you read the caption. Please understand what you are looking at before you jump to conclusions and leave a condescending comment.

It's a false Victory, Russia/USSR is still communist state until the "Putin's gangsters" are displaced. Staling & Co., killed more people than Hitler!
The Russian people are great, but the rulers are not. I'm from Lithuania,
hundreds of thousands of Lithuanian were deported to Siberia & executed.
Do Not trust them!

Pretty cool; still sad to male weapons in value more than the humans and the lost people.

I now know what the two guys in picture #20 were smiling about; they were watching the march in picture #19.

Comment 49- I don't think image 11 is photoshopped, the background distortion is most likely from the heat rising above flames not visible in the foreground.

If you go to the memorial for the Great Patriotic War (WWII) in St Petersburg you come to understand that at least 10 million died in the Soviet Union. Yes, Stalin's indifference to casualties and punishment of great portions of the population caused many deaths, but the Nazis did most of the killing, just for the sake of killing.
Russian blood saved American blood in Normandy. Russia wore the Nazis out, and we were lucky to be able to send the equipment do help do the job. US taxpayers gave money and material, Russians gave lives of innocent people and the flower of a generation.

This day can bring us all together. truly a joint victory. Glad to see big celebrations on so many nations. Hopefully. There will be more xchange programs between our nationns.

Of course corruption needs to be fixed. We all have baggage in that department, and we can. Help russia, by supporting her efforts and doing our part in our own house.

Amount of armaments of major nations is known quite precisely. Era when parades were used to scare or impress military analysts ended around late 1980s.

In a particular way of view these people are nice and deserve all admiration and respect.
But no larger than those living or dead German soldiers they have fought,
In opposite sides they gave suffer and lives firmly believing their cause and motives were fair.
ThatÂ´s the perpetual misery of the human being....to fight and die for some cause that will be fair or not fair later on.

Those guys were tough hombres. To survive The Great War, then the Soviet government, and a zillion glasses of vodka takes awesome genes.