As militiamen and mercenaries loyal to Moammar Khadafy ferociously strike back at rebels in and around the Libyan capital of Tripoli, much of the rest of the nation is embracing a bracing reality: After 41 years of ruthless and total control by Khadafy, they are suddenly free to rule themselves. In Benghazi, Libya's second-largest city and the cradle of the revolt, chants of jubilation are interspersed with quiet meetings. Neighborhood leaders are working to figure out such tasks as how to direct traffic and ensure utilities are up and running as they craft a plan for the future of the city. For guest workers and other expatriates, the future is no longer Libya. By the tens of thousands, they have been attempting to flee the violence, massing at ports as they await ships, overrunning the main airport,, and crossing by any means possible into Tunisia. Here's a look at one day -- Thursday -- in the life of those parts of Libya under rebel control. -- Paula Nelson (33 photos total) 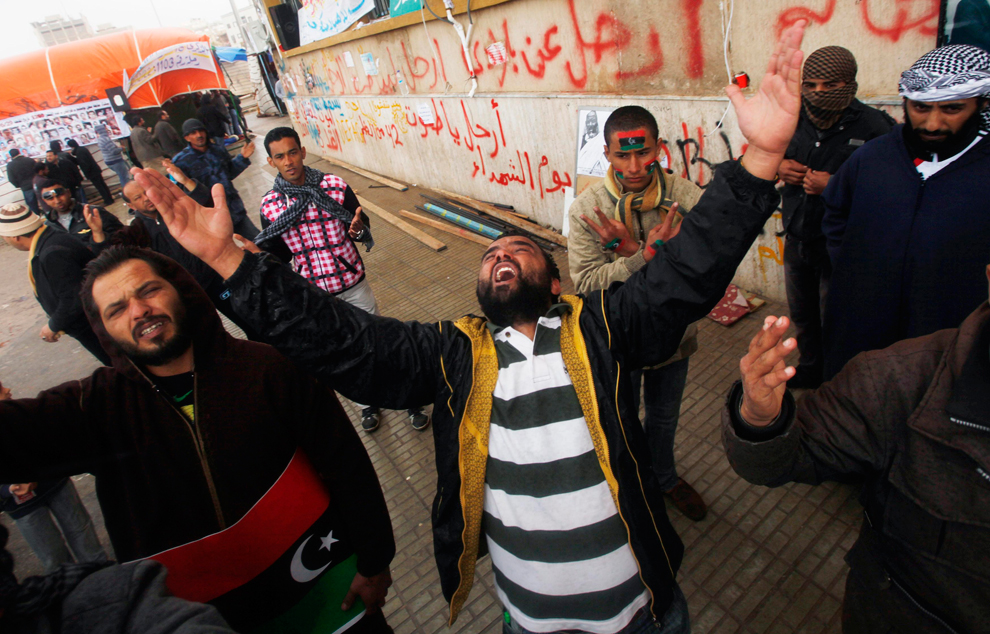 Exclamations of joy fill the air as residents of Benghazi find themselves in an unimaginable situation: Freed from Moammar Khadafy's rule for the first time in more than four decades. (Suhaib Salem/Reuters) 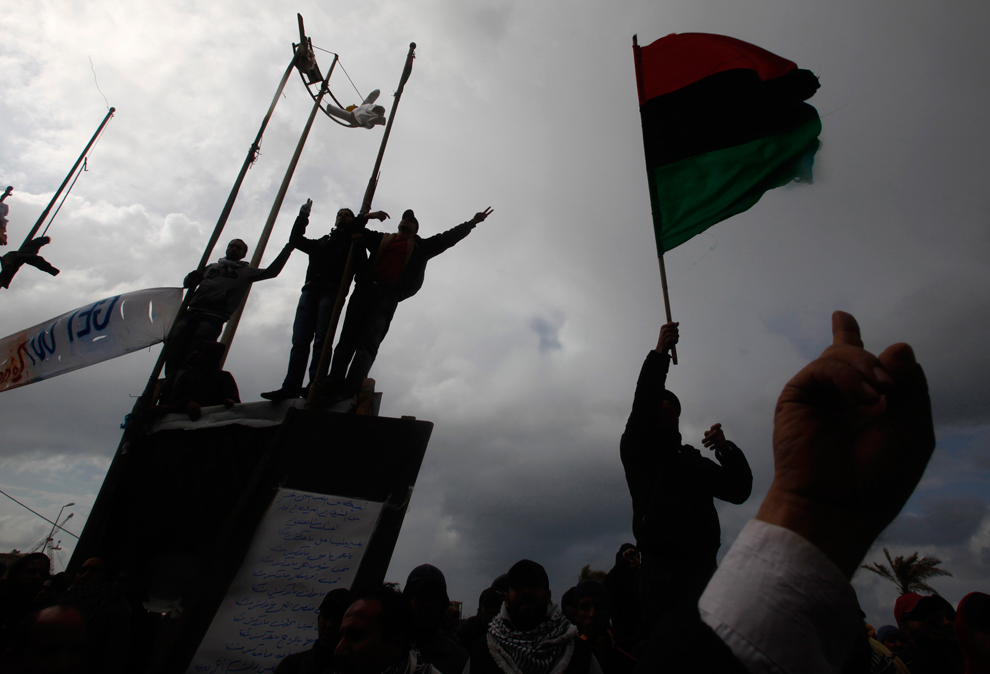 2
Protesters celebrate and shout slogans following their takeover of Benghazi. Even amid the euphoria, rumors abound that Moammar Khadafy will strike back, either through massive aerial or naval bombardments or through a string of stealth attacks from his plainclothes agents. (Suhaib Salem/Reuters) #

3
A Libyan closes a box of ammunition at Al-Katiba military base after it fell to protesters battling the splintering government of Moammar Khadafy. The base is near Benghazi, the nation's second-largest city and one also under the control of rebels. Army units and militiamen loyal to Khadafy struck back Thursday against rebels in cities closer to the capital of Tripoli, attacking a mosque where many were holding an anti-government sit-in and battling others who seized control of an airport. (Hussein Malla/Associated Press) # 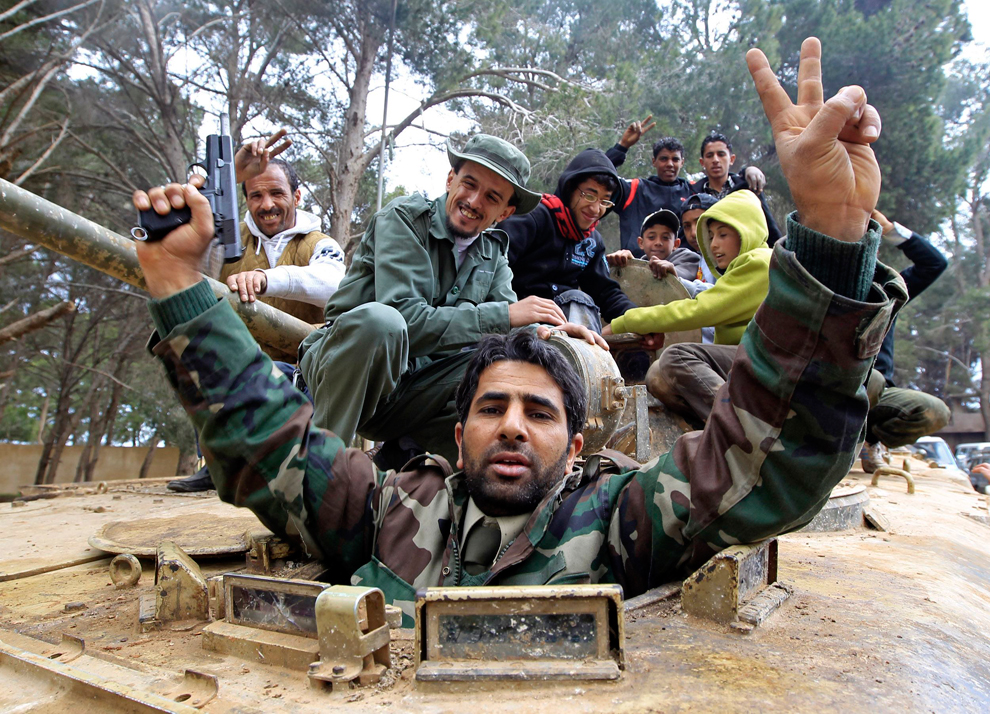 4
A man fires his pistol into the air as he celebrates with anti-government protesters Thursday on an army vehicle in the eastern Libyan town of Shahat. (Goran Tomasevic/Reuters) # 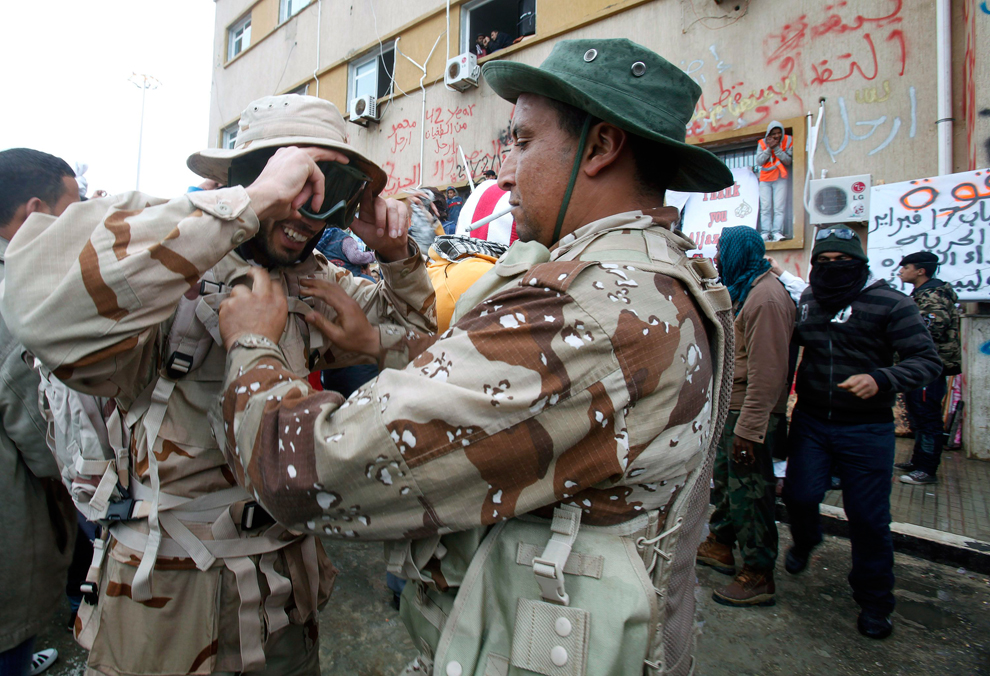 5
Anti-government demonstrators help each other put on army uniforms that they took from troops loyal to leader Moammar Khadafy in Benghazi. (Asmaa Waguih/Reuters) # 6
The runway of a military airport has been closed down Thursday in the eastern Libyan town of Al Abrak. (Goran Tomasevic/Reuters) # 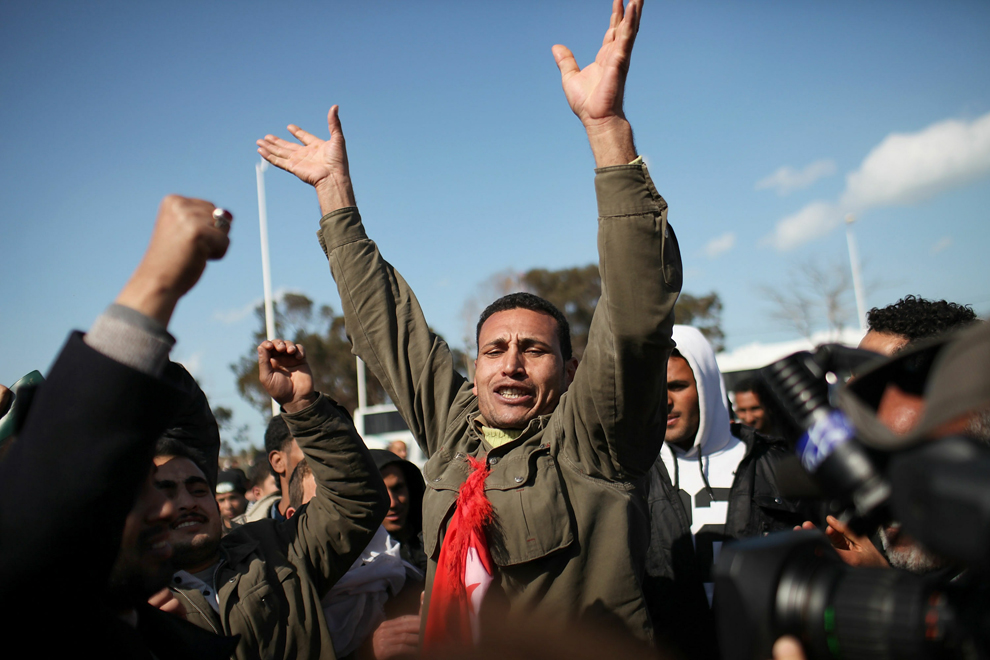 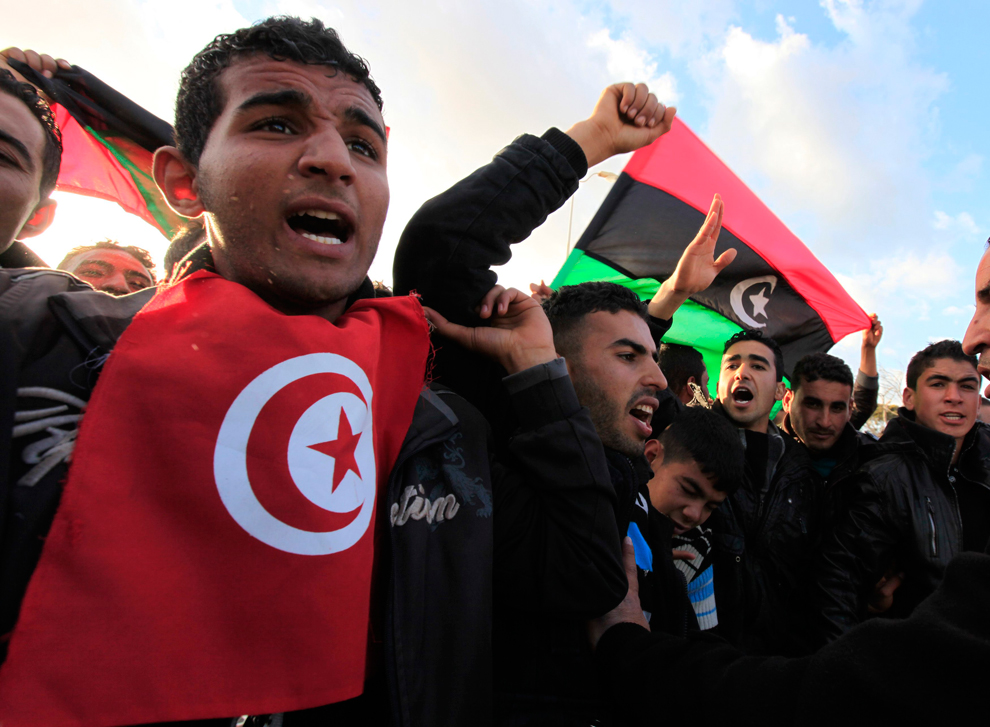 8
Tunisians chant slogans as they hold Tunisian and old Libyan flags during an anti-Khadafy protest at the Tunisian-Libyan border crossing of Ras Jdir. Weighed down with suitcases, blankets, and, for some, horrific memories, people fled into Tunisia by the thousands. (Zohra Bensemra/Reuters) # 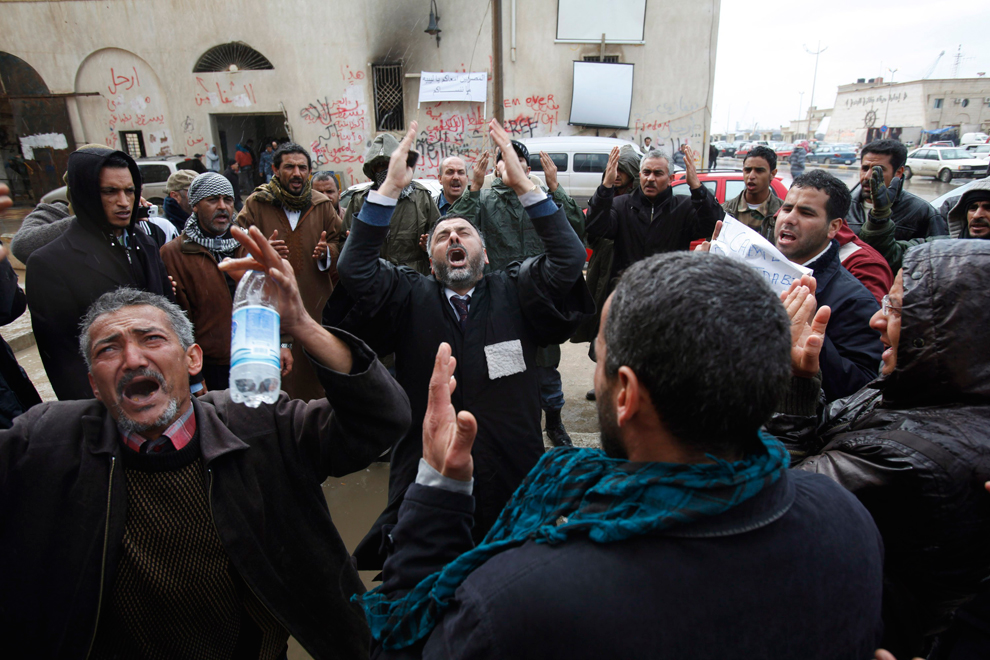 9
Anti-government demonstrators pray for the country along a Benghazi street Thursday. The uprising first gained strength in Benghazi on Feb. 16 when a group armed with gasoline bombs and rocks gathered at a government office and demanded the release of a human rights advocate. (Asmaa Waguih/Reuters) # 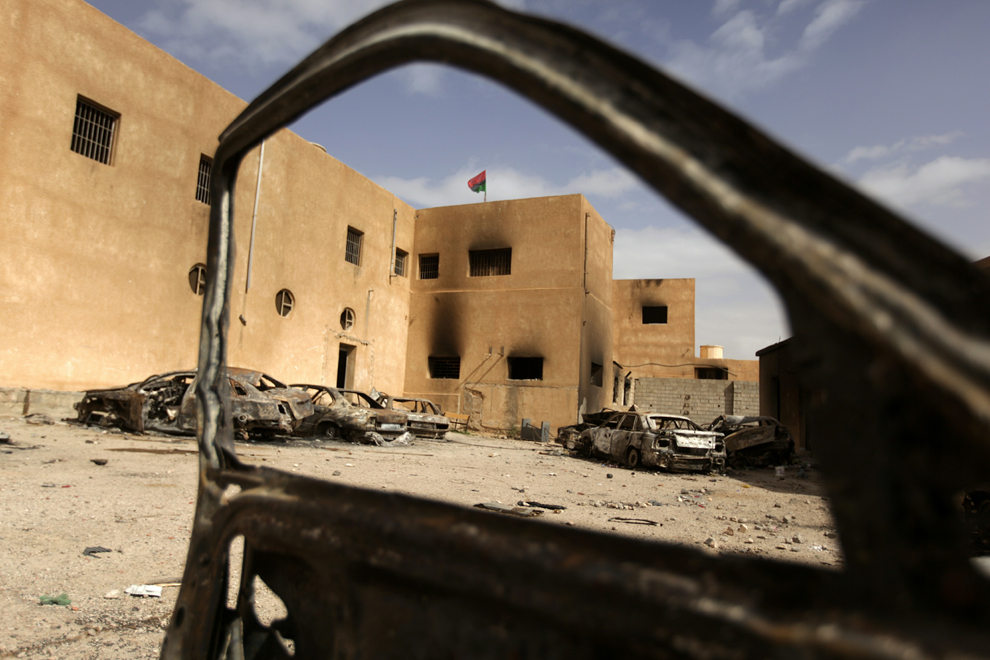 10
Rebels have gained control of the eastern city of Tobruk, where demonstrators had set fire to a police station and destroyed vehicles. Tobruk is one of a string of Libyan towns made famous during World War II, when Allied armies wrest control of them from Italian and German forces. (AFP/Getty Images) # 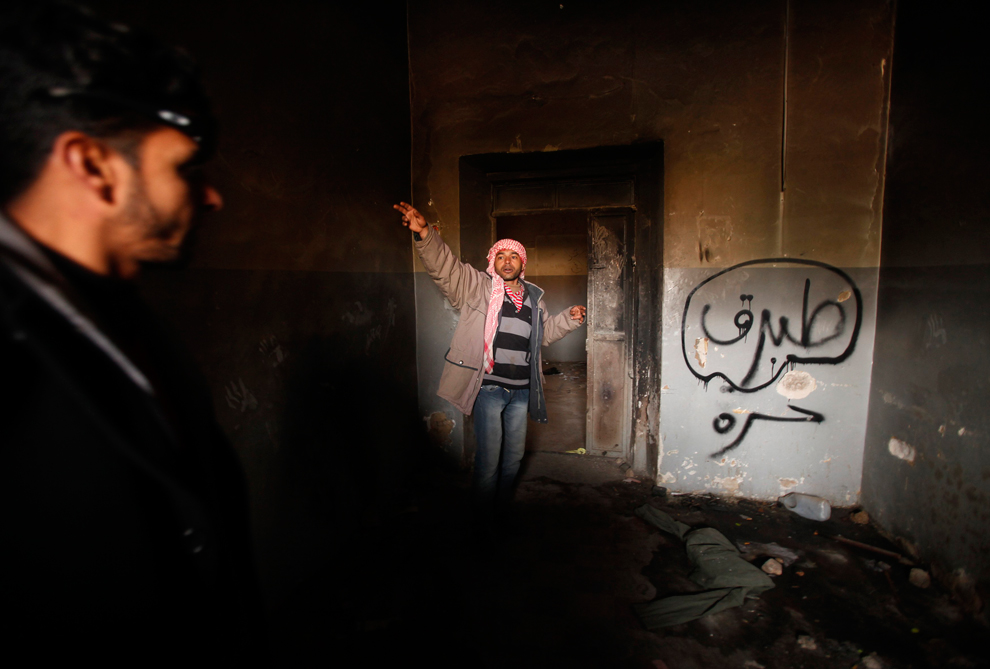 11
In Tobruk, troops and police have either withdrawn or joined with diffuse and disparate opposition groups to start providing some order and services. Several Libyans walk through a burned-out government building Thursday. (Suhaib Salem/Reuters) # 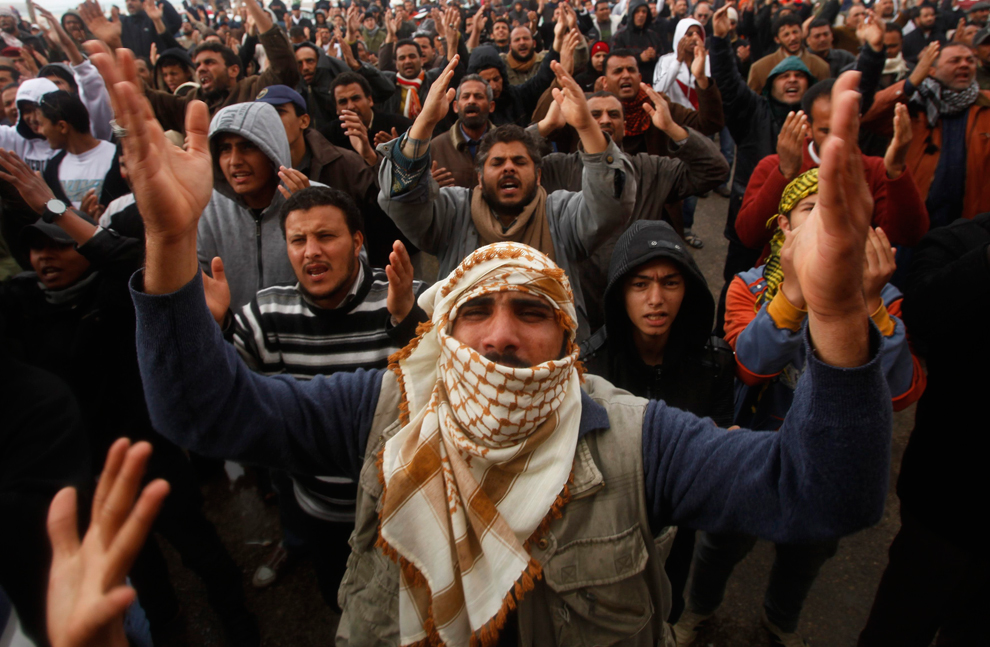 12
Anti-Khadafy protesters shout slogans in Benghazi. After a week of violence in which it threw off government control, this elegant port of about 700,000 is being run by committees of citizens as the dust of rebellion settles. (Suhaib Salem/Reuters) # 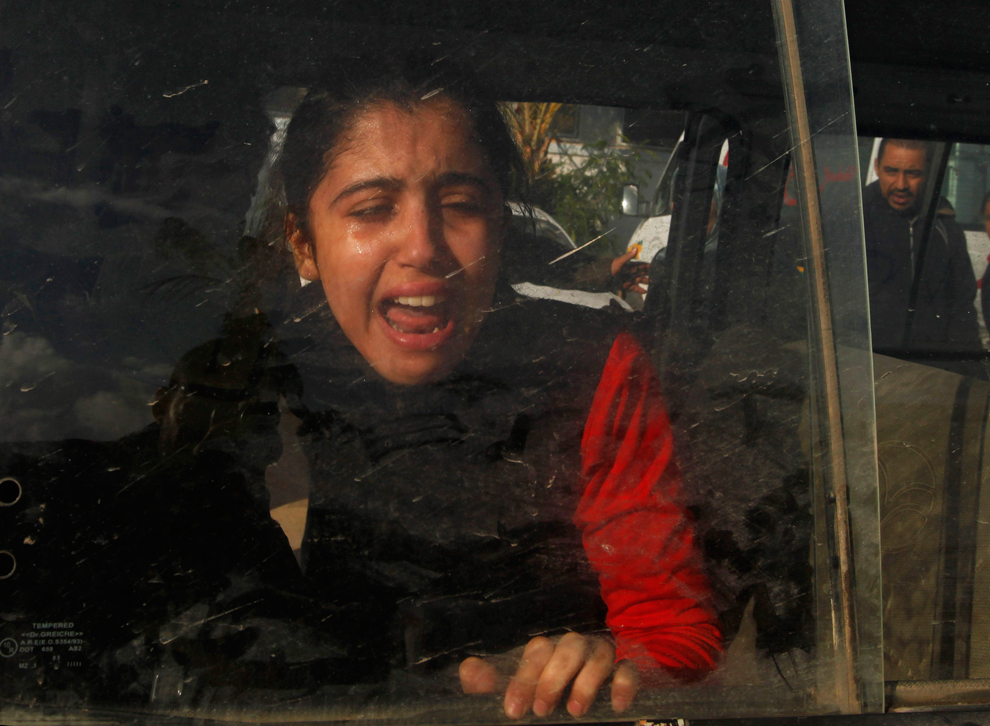 13
A relative of Ahmed Sarawi, 36, who was killed in the recent clashes, cries inside a vehicle in Benghazi. (Suhaib Salem/Reuters) # 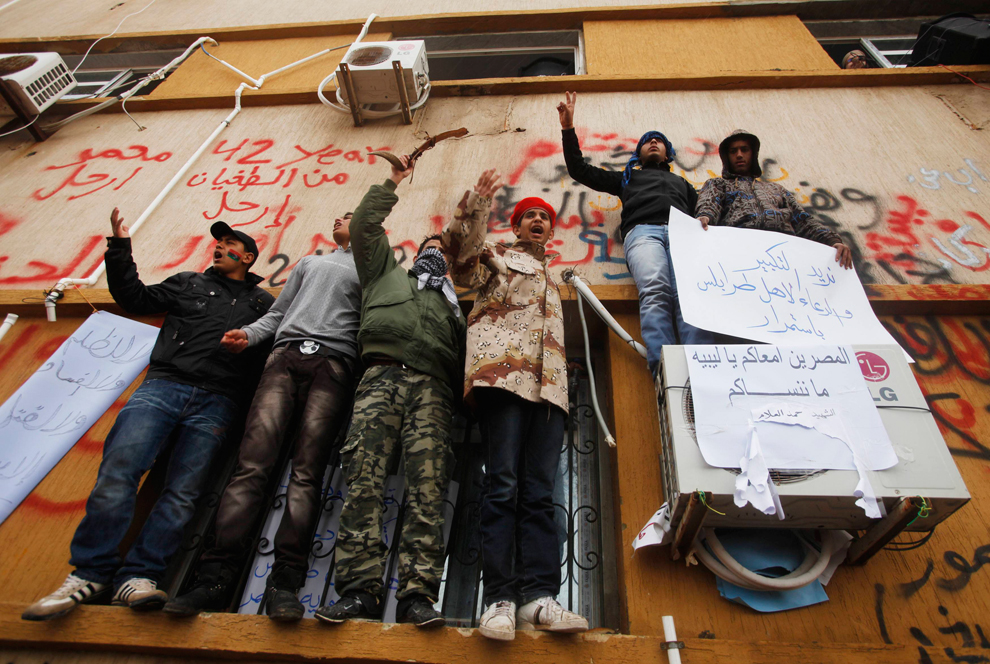 14
Anti-government protesters celebrate their victory in Benghazi. Many residents insist on still gathering daily, in what has become a ritual defiance of a 1973 law that banned four or more people from gathering. Moammar Khadafy had long squelched any attempts to organize, even if it was for a civic group. (Suhaib Salem/Reuters) # 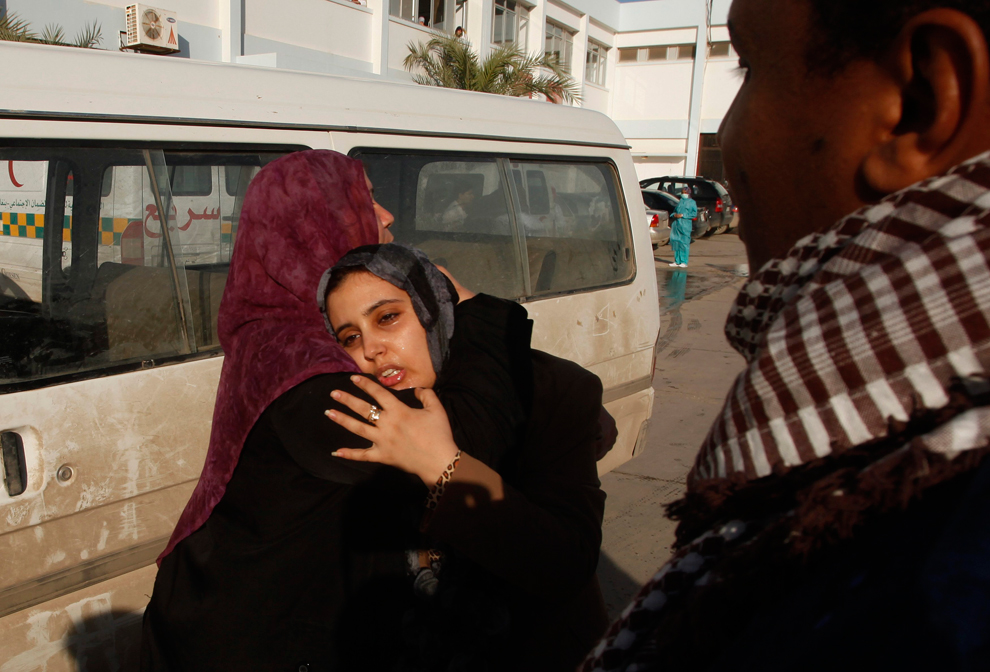 15
In Benghazi, a relative mourns the death of Ahmed Sarawi, 36, who was killed in recent clashes. (Suhaib Salem/Reuters) # 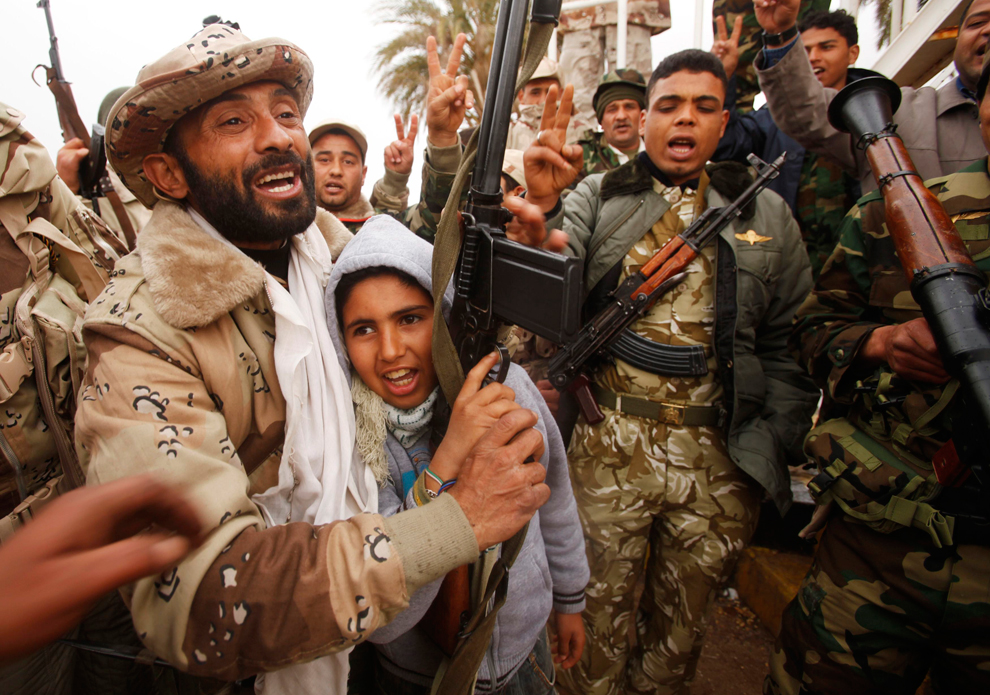 16
In Benghazi, the birthplace of the revolt against Moammar Khadafy, celebrations have replaced clashes in the street after rebels took over the city. Residents join former soldiers and jubilant rebels in setting off fireworks and condemning the Libyan leader. Thousands converge on the city center, waving red, green and black monarchy-era flags and giving out snacks and juice to passing cars, which honk their horns. (Suhaib Salem/Reuters) #

17
A former Libyan soldier who has defected to the anti-Khadafy forces looks through a broken window at a military compound in rebel-controlled Benghazi. Residents of Benghazi have jailed those they say are mercenaries and have set up defenses around the city. (Suhaib Salem/Reuters) #

18
An anti-government demonstrator, the colors of the Kingdom of Libya flag on his face, grabs a cup of tea in Benghazi Thursday. Rebels have seized control of Benghazi, the nation's second-largest city. (Asmaa Waguih/Reuters) # 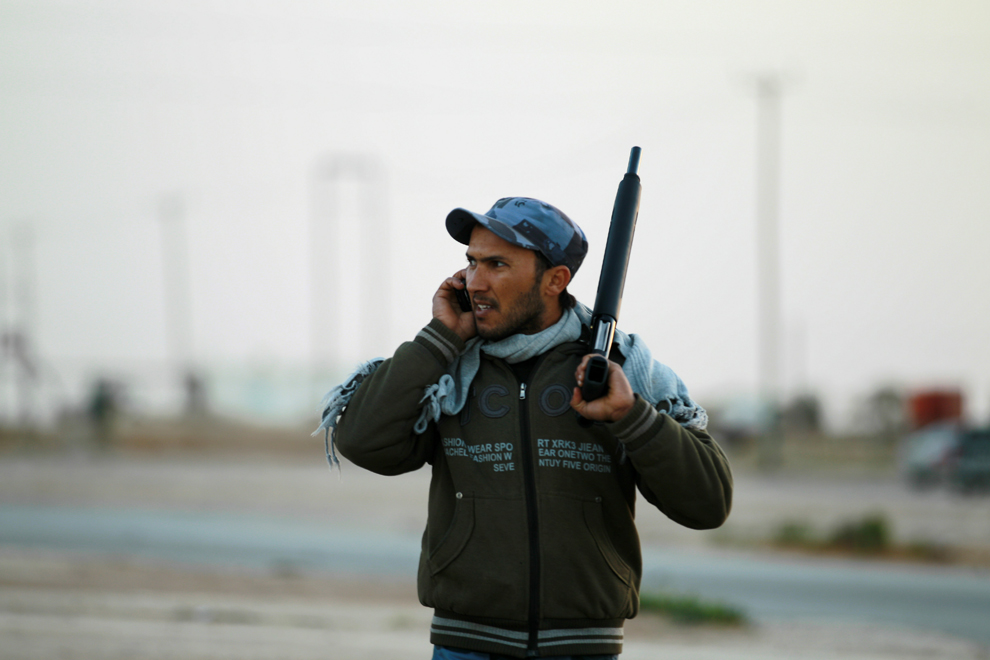 19
A Libyan policeman who defected to the rebels mans a roadblock in the city of Tobruk Thursday. (Patrick Baz/AFP/Getty Images) #

20
Anti-government demonstrators show hand grenades carried by troops loyal to Libyan leader Moammar Khadafy while fighting demonstrators in Benghazi. Residents of Benghazi have jailed those they say are mercenaries and set up committees to run this eastern city now out of the Khadafy's control. (Asmaa Waguih/Reuters) # 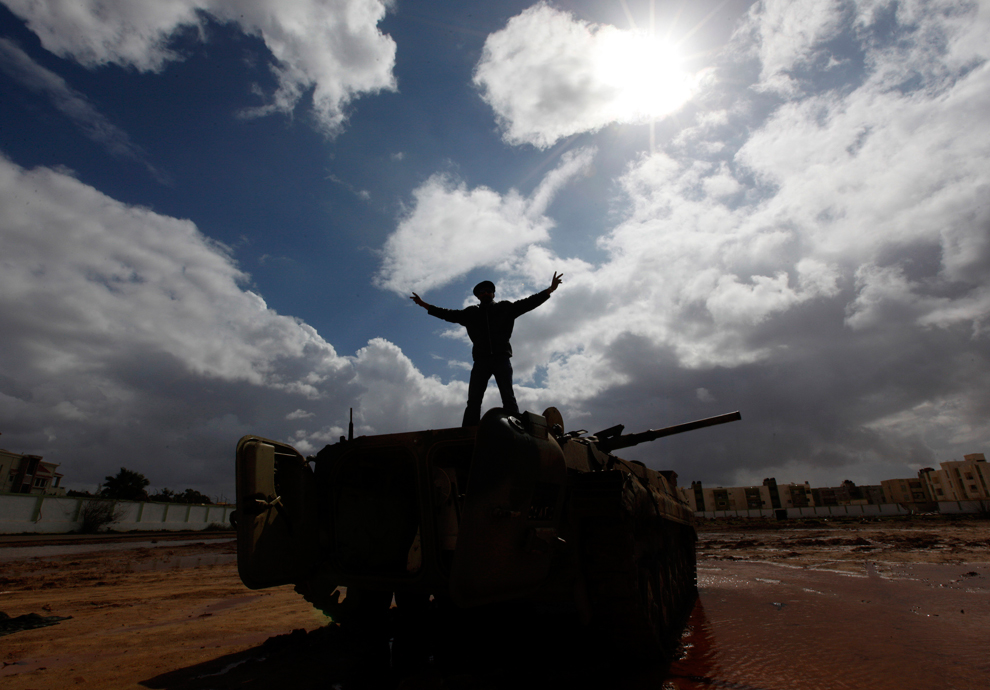 21
Flashing V for victory, a Libyan protester celebrates as he stands on a destroyed tank at Al-Katiba military base after it fell to rebels. (Hussein Malla/Associated Press) #

22
Tunisian soldiers help Egyptian workers fleeing Libya load their belongings onto a truck Thursday after crossing into Tunisia at the border crossing of Ras Jdir. The workers said they were based on a construction site in the Libyan town of Zuara, which has fallen to anti-government forces. The workers said the town was controlled by "popular committees" armed with automatic weapons. (Yannis Behrakis/Reuters) # 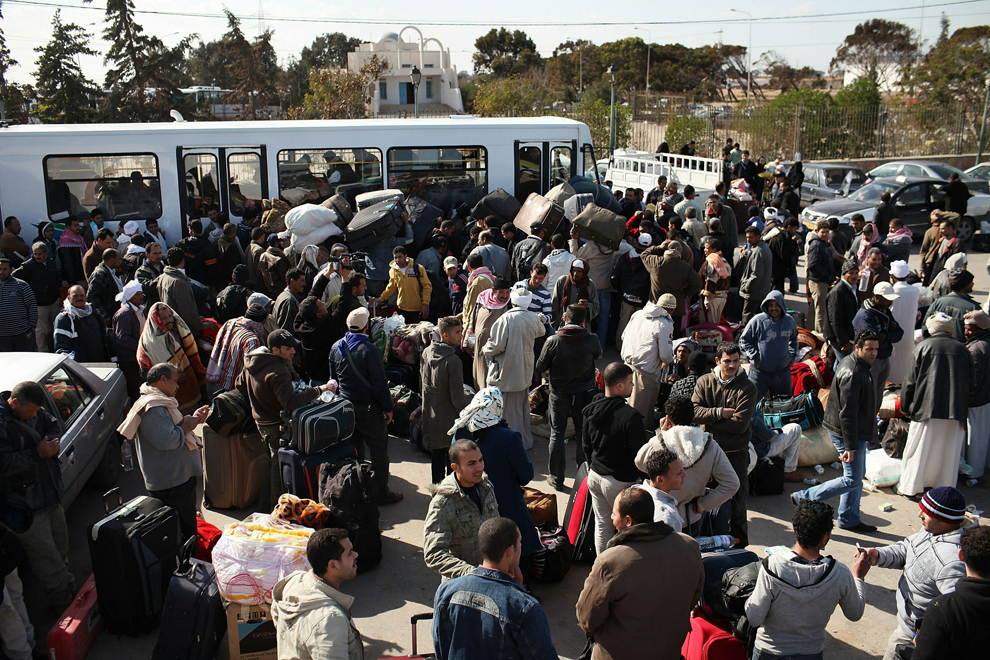 23
Libyan refugees and guest workers who have fled the country try to board buses Thursday in Ras Jdir, Tunisia. As fighting continues in and around the Libyan capital of Tripoli, thousands of guest workers and Libyans have been fleeing to Tunisia. (Spencer Platt/Getty Images) # 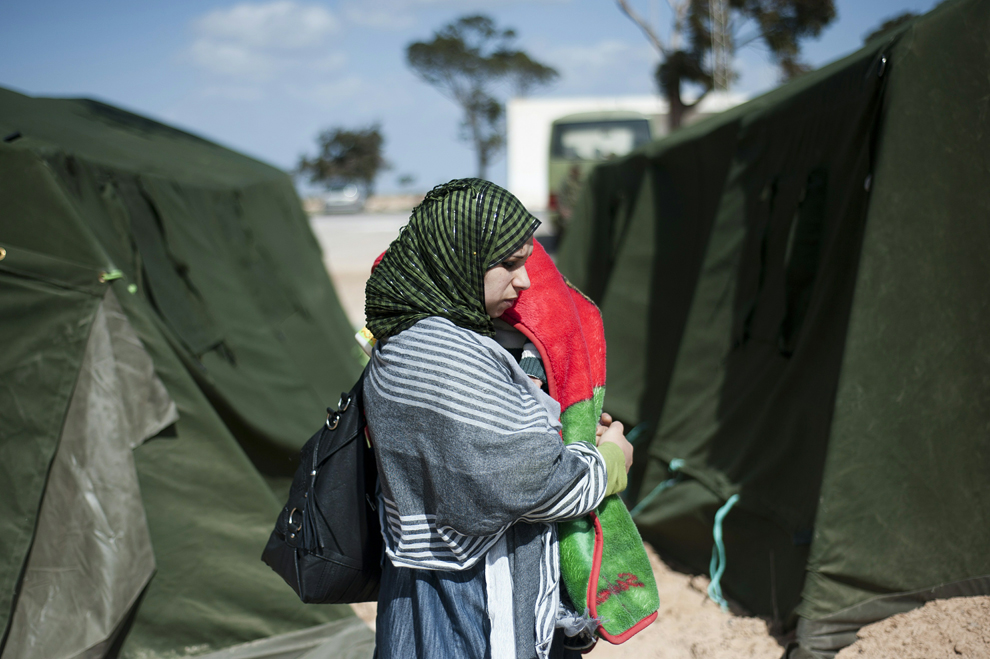 24
An Egyptian refugee carries a child at a military field hospital run by the Tunisian army at the Ras Jdir border post. More than 30,000 Tunisian and Egyptian migrants have fled to their home countries from Libya, the International Organization for Migration said Thursday, adding that it expects tens of thousands more to leave. (Fred Dufour/AFP/Getty Images) # 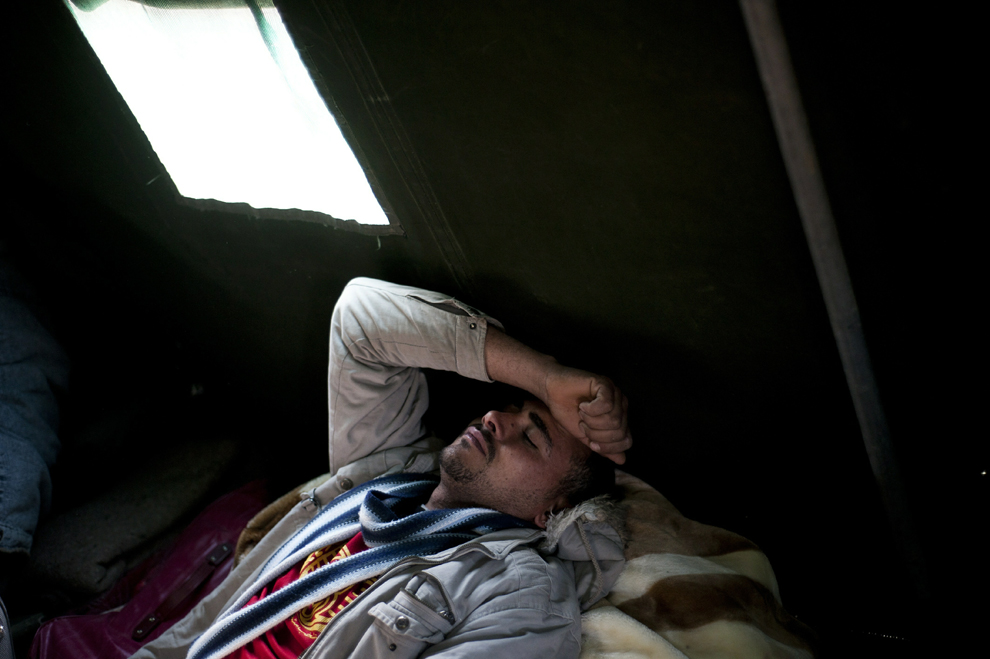 25
An Egyptian man rests in a tent Thursday at a military field hospital run by the Tunisian army, after fleeing from Libya. The unrest across North Africa began in Tunisia in what has become known as the Jasmine Revolution. Anti-government forces unleashed a fiery wave of street protests that ousted the authoritarian president, Zine el Abidine Ben Ali. (Fred Dufour/AFP/Getty Images) # 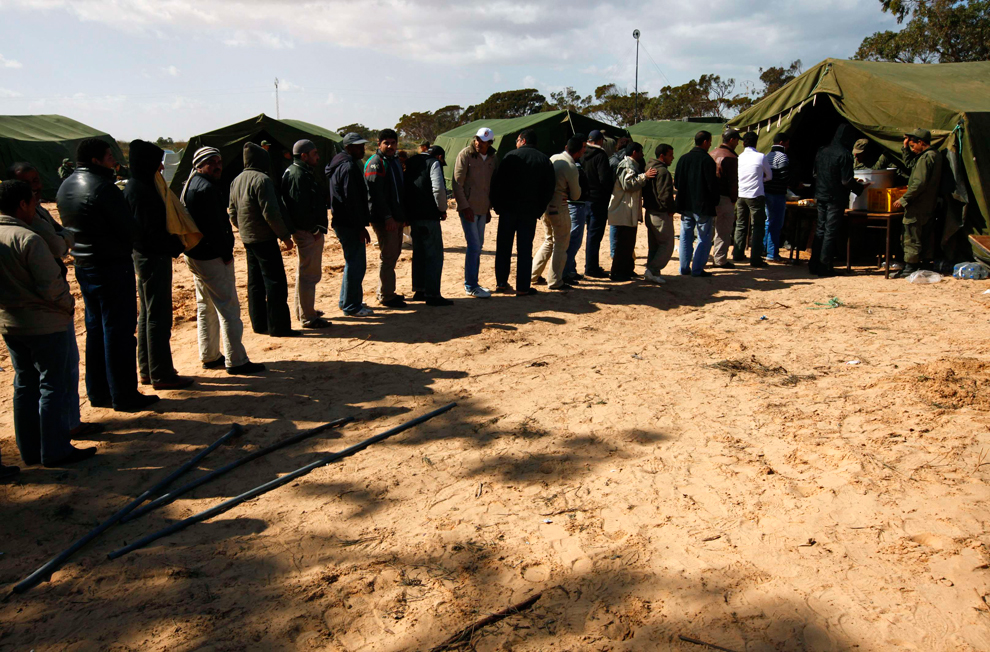 26
Egyptian workers wait for food to be distributed at a refugee camp in Tunisia. (Yannis Behrakis/Reuters) # 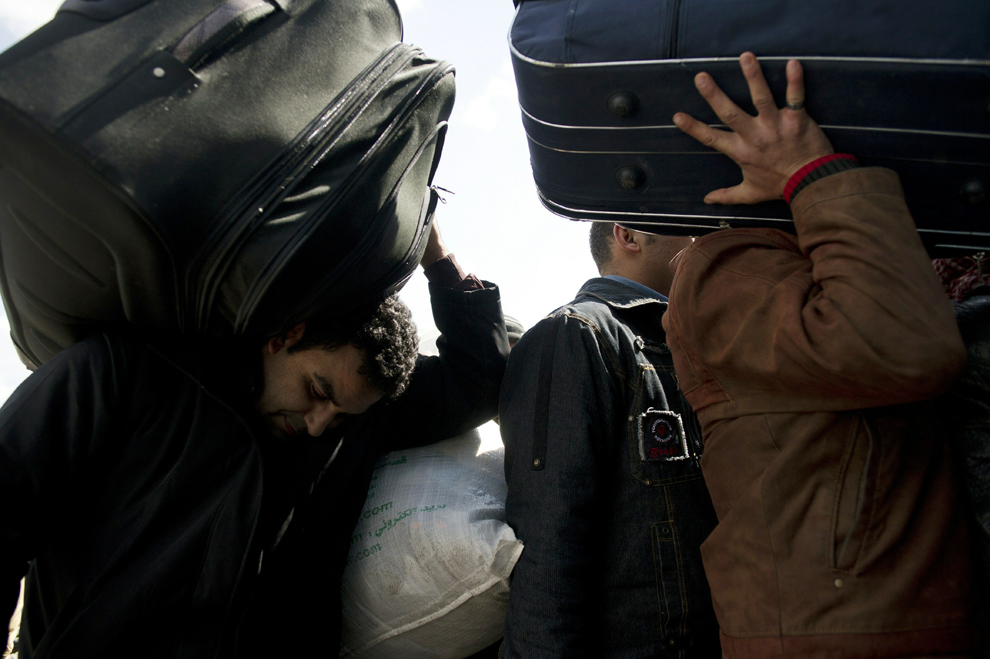 27
Carrying whatever they could gather as they fled Libya, Tunisians wait to board a bus at the Ras Jdir border post. (Fred Dufour/AFP/Getty Images) # 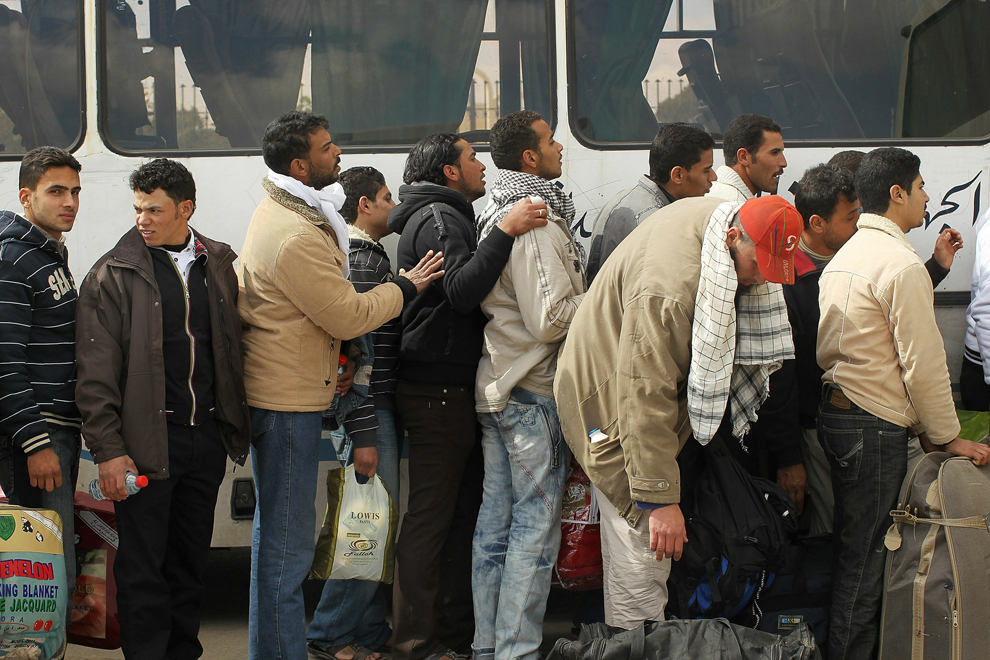 28
Men wait to board buses after crossing the border from Libya into Tunisia in Ras Jdir, Tunisia. As fighting continues in and around the Libyan capital of Tripoli, thousands of guest workers and Libyans struggle to escape the violence. (Spencer Platt/Getty Images) # 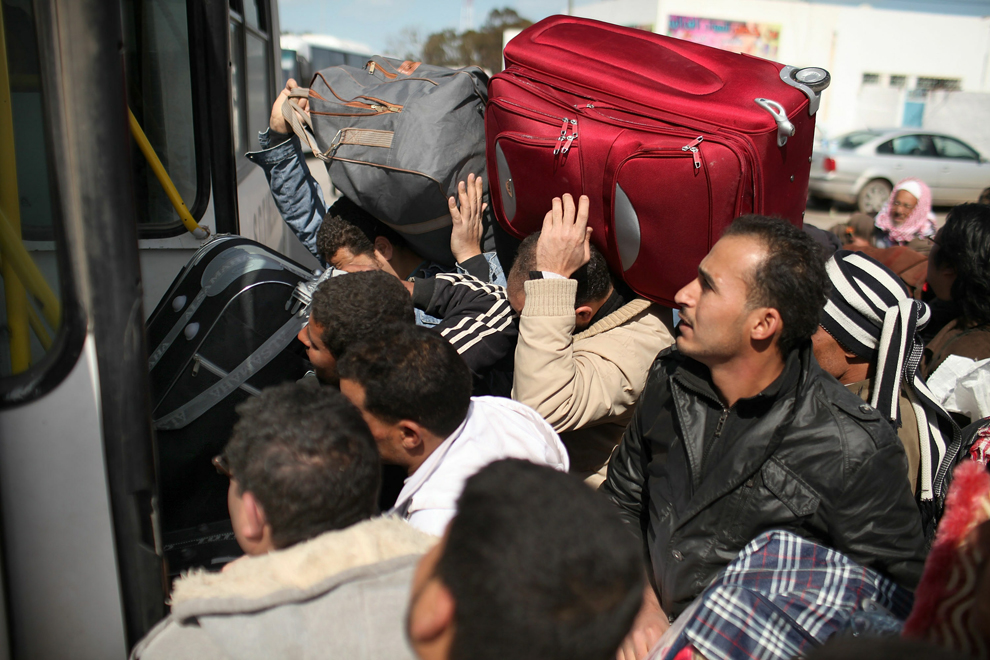 29
Men clamber aboard buses in Ras Jdir, Tunisia, after fleeing Libya. By midday Wednesday, about 2,000 people had streamed over the Ras Jdir crossing point, part of a wider exodus of tens of thousands of foreign nationals trying to escape the North African country. (Spencer Platt/Getty Images) # 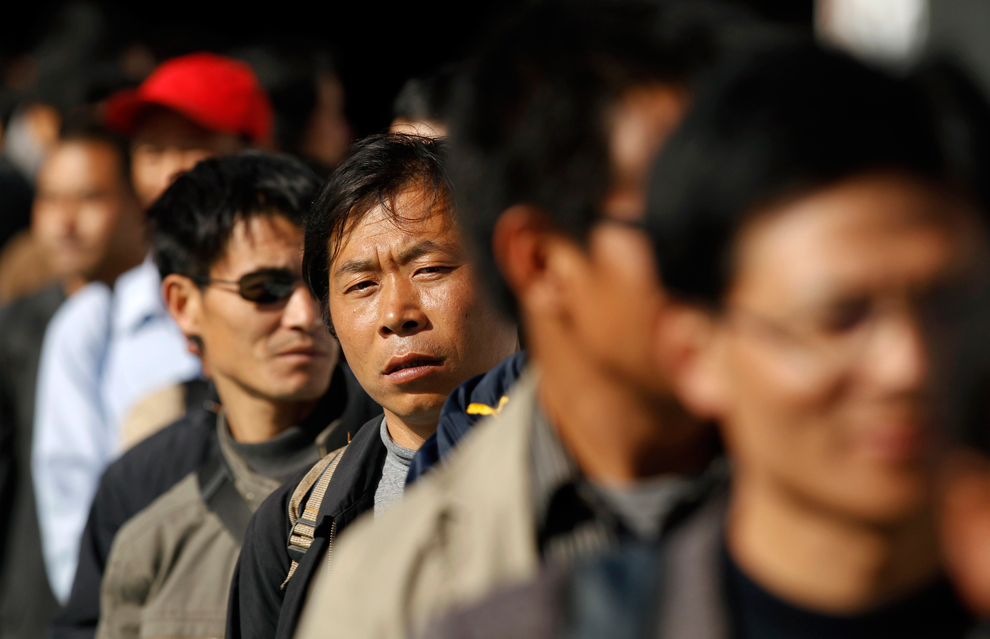 30
Chinese evacuees wait to disembark at the port of Heraklio on the island of Crete. Two Greek passenger ships sailed from Libya to the island of Crete with about 4,500 evacuees on board, including Greek and Chinese nationals. (Yiorgos Karahalis/Reuters) # 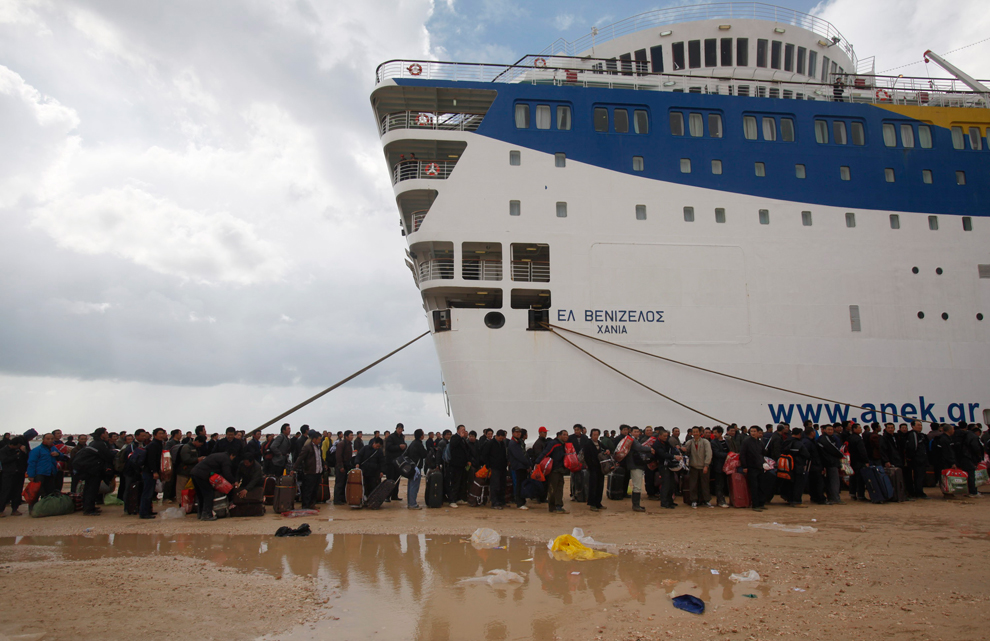 31
Migrant laborers and other expatriates prepare to board a ship going to Greece from the Libyan harbor in Benghazi. (Asmaa Waguih/Reuters) # 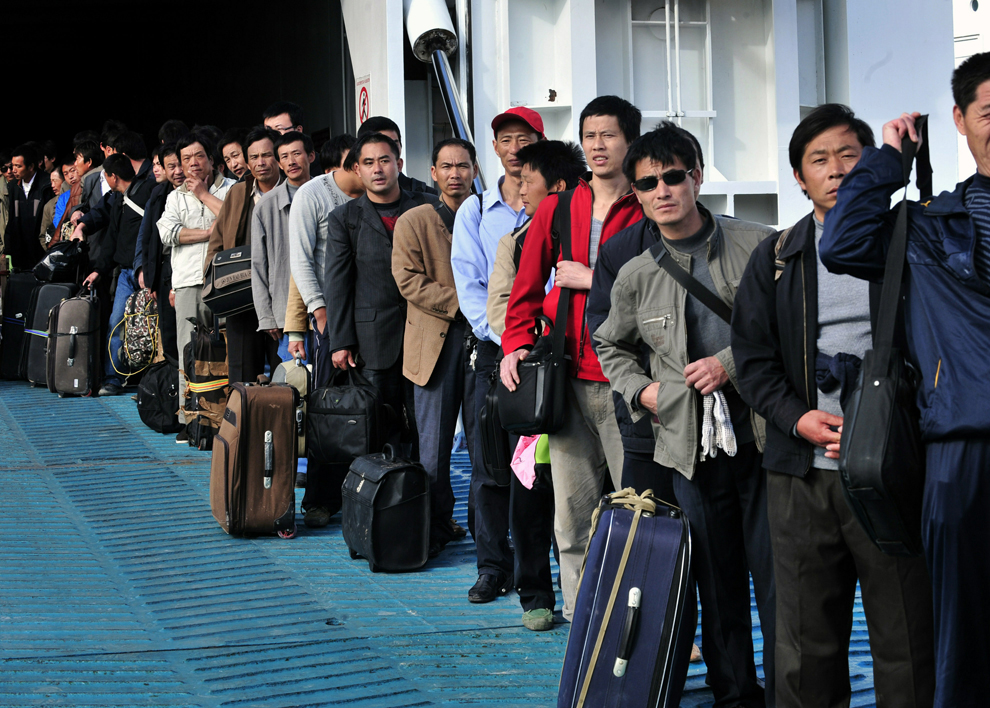 32
The Libyan uprising and brutal counterattacks by forces still loyal to Moammar Khadafy have prompted tens of thousands to flee, including these Chinese evacuees arriving on the Greek island of Crete. Many of those fleeing were able to take Greek ferries to safety; others were stuck in Libyan ports waiting for ships to arrive and seas to calm. The main airport in Libya has been overrun with people desperate to leave, witnesses say. (Aris Messinis/AFP/Getty Images) # 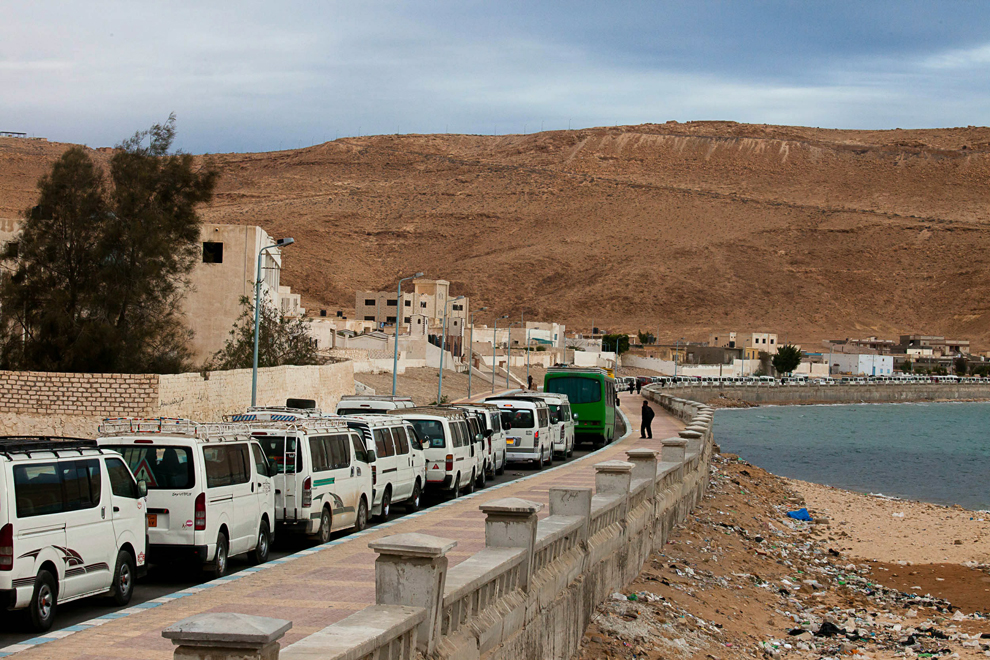 33
Taxis packed with Egyptians fleeing Libya wait to reach the Sallum border crossing Thursday. Much of the inspiration among anti-government leaders in Libya came from the success of their counterparts earlier this month in Cairo. (Trevor Snapp/AFP/Getty Images) #