A chilly solstice (and lunar eclipse)

Yesterday, December 21st, was the Winter Solstice, the shortest day of the year in the northern hemisphere, and the start of winter. Also, for the first time since 1638, a total lunar eclipse took place on the same day as the solstice, observable by people across the Americas and parts of Asia. During a lunar eclipse, the Moon travels briefly through the shadow of the Earth, and appears to dim and become a dark reddish color. The coloration is due to sunlight filtering through the Earth's atmosphere - the same conditions that create red sunsets - so an observer standing on the Moon during a lunar eclipse would look up and see the dark Earth surrounded by a red ring, a sunset around the globe. Collected here are images of the eclipse, the solstice, and some of the icy weather as winter officially begins. [Editor's note: An invitation is now open for you to submit your own Christmas 2010 photos for an upcoming entry in January. Next regular posting on 12/27.] (25 photos total) 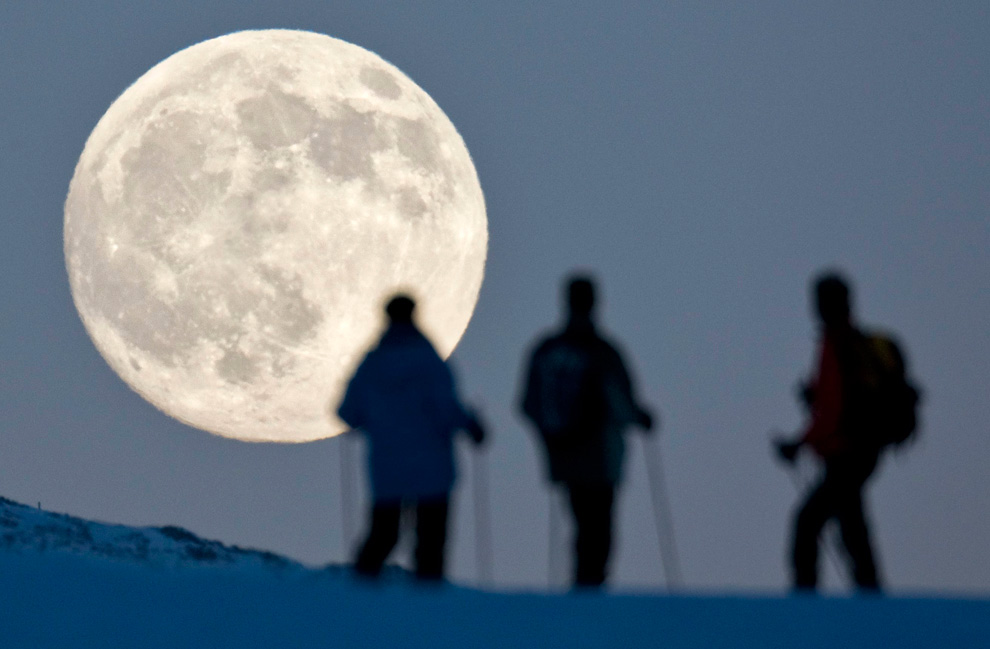 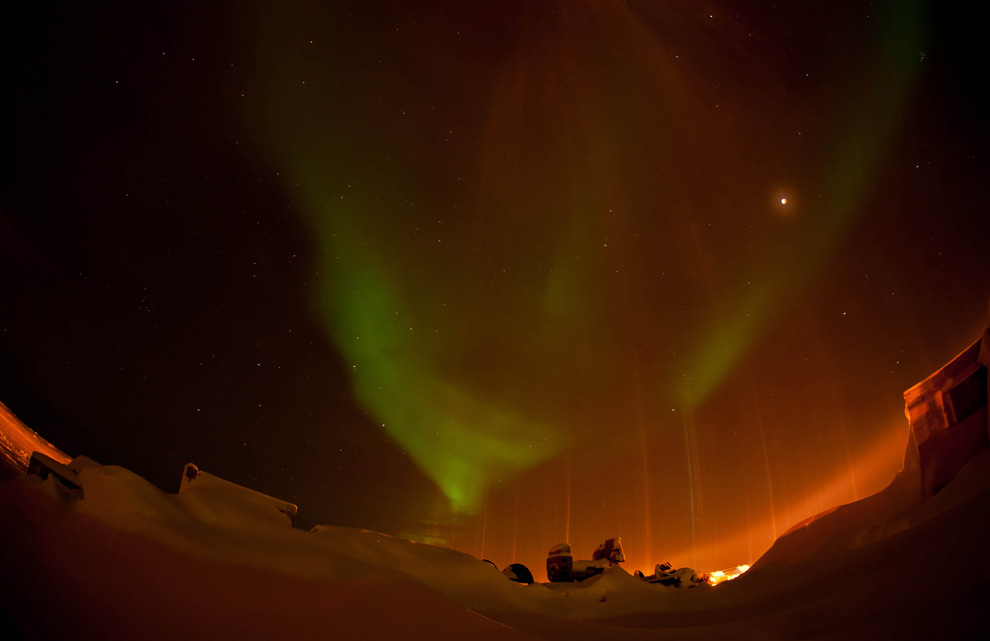 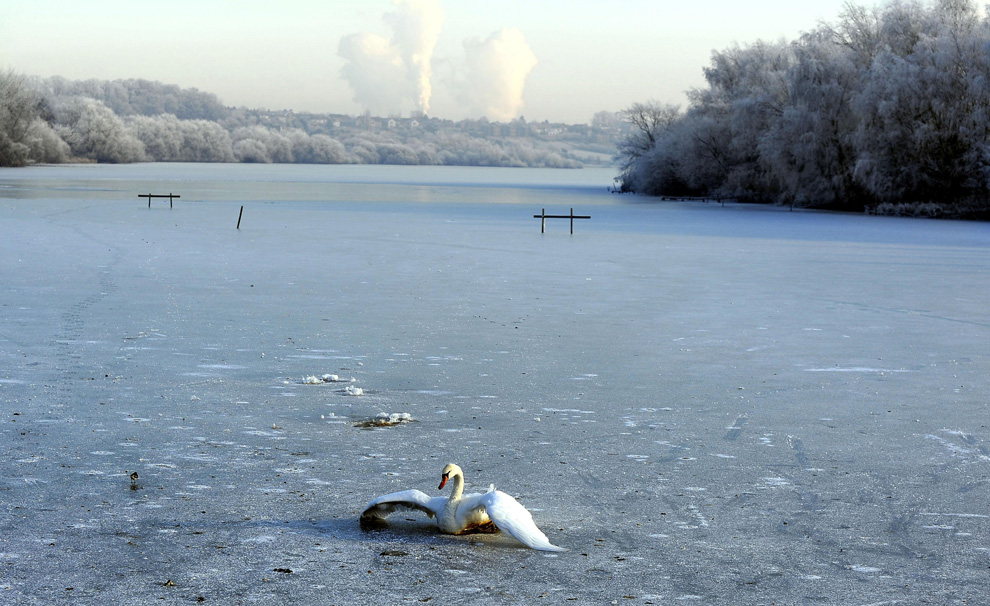 3
A swan tries to break free of the ice on the frozen lake at the Fairburn Ings Bird Sanctuary near Castleford, England on Tuesday Dec. 21, 2010, as the deep freeze in the Britain continues. (AP Photo/John Giles-pa) # 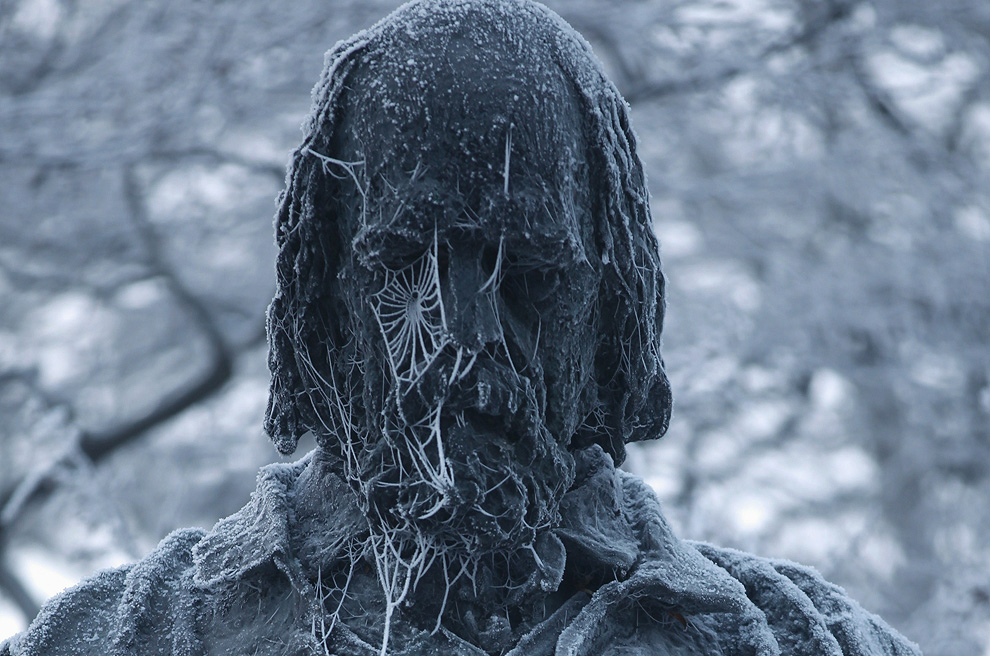 4
Frost clings to spiderwebs and the statue of Lord Alfred Tennyson as freezing fog surrounds the tower of Lincoln Cathedral as plummeting temperatures continue to grip the UK on December 20, 2010 in Lincoln, United Kingdom. (Christopher Furlong/Getty Images) # 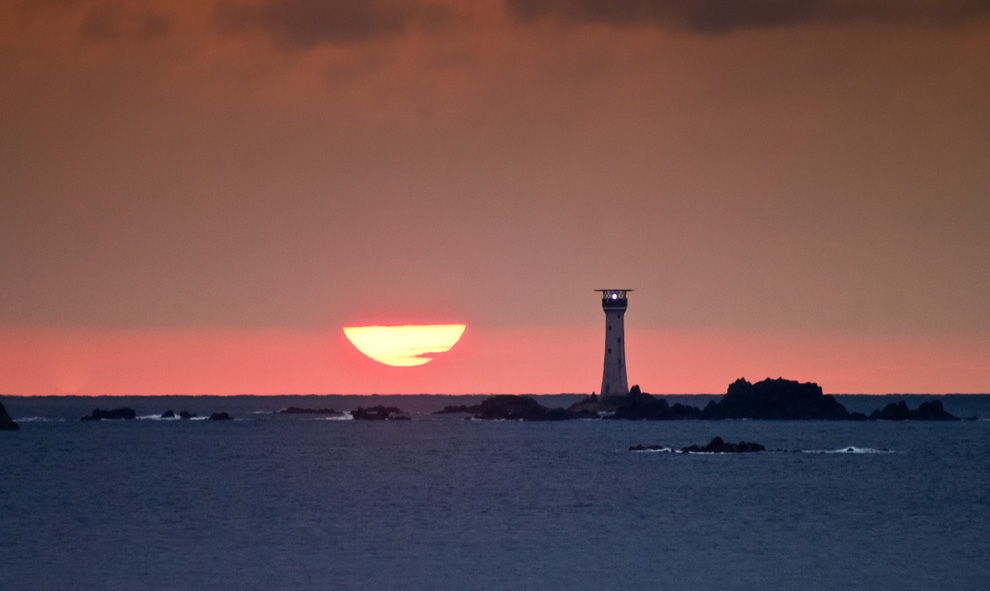 5
The sun sets behind the Hanois Lighthouse near the Island of Guernsey off the coast of Normandy, France on the winter solstice, 2010. Original here. (Angus MacRae / CC BY) # 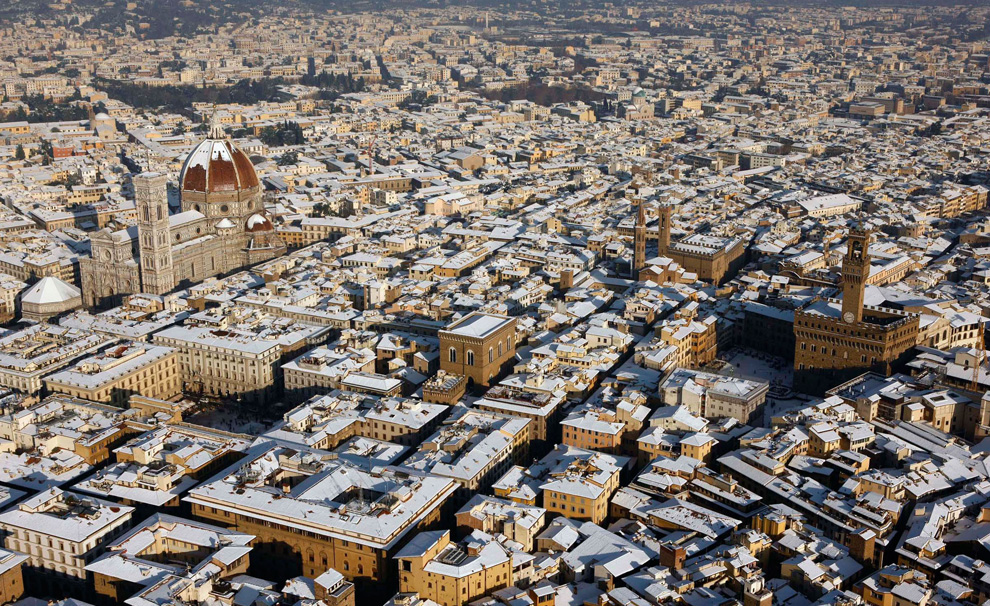 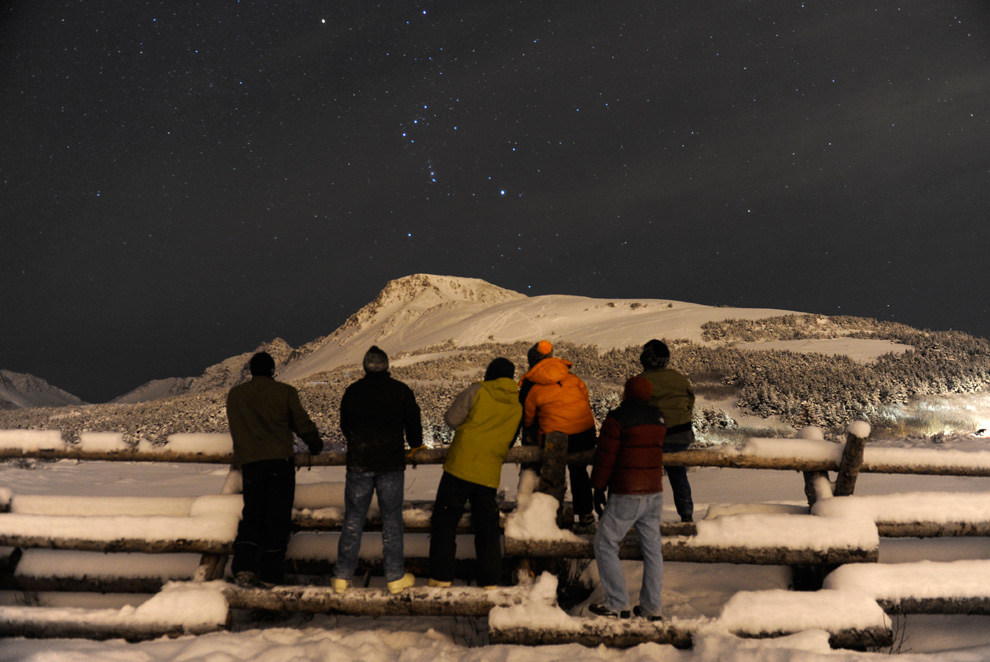 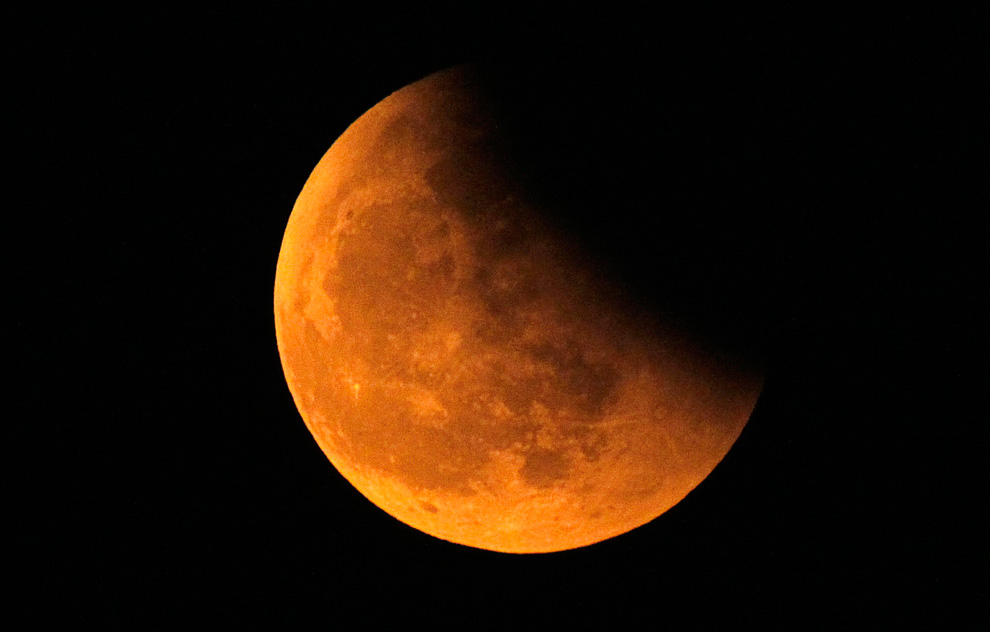 8
The shadow of the Earth is seen on the Moon during a total lunar eclipse seen from Shanghai, China on December 21, 2010. (REUTERS/Aly Song) # 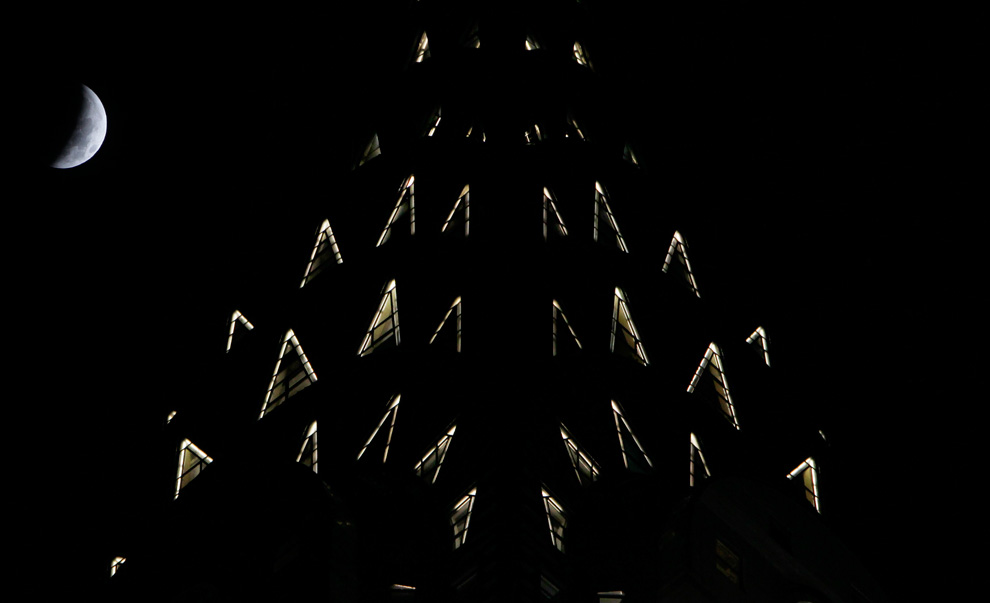 9
The moon on its way to being totally eclipsed is seen with the Chrysler Building in the foreground in New York City on Tuesday, Dec. 21, 2010. (AP Photo/Seth Wenig) # 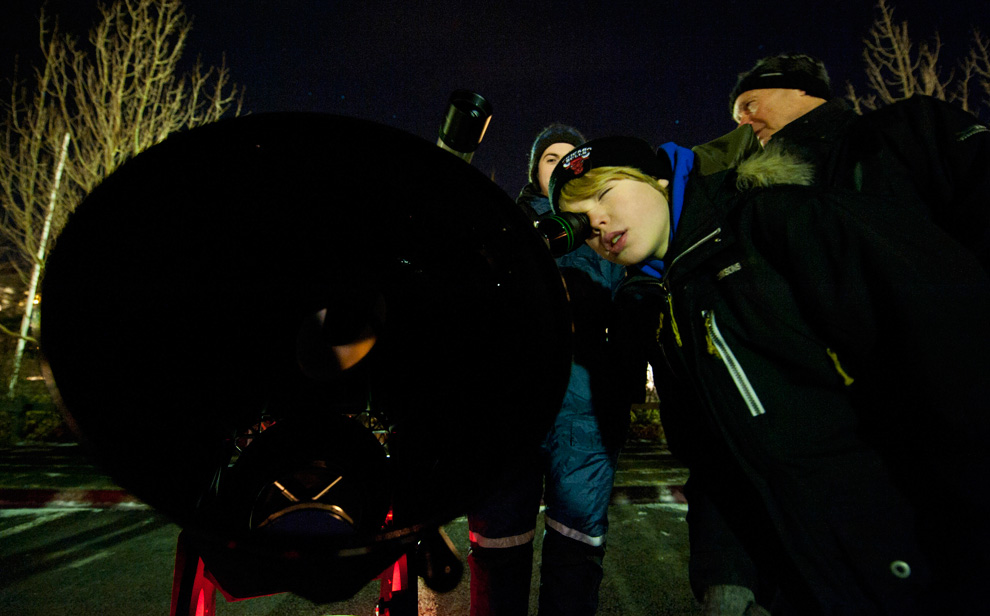 10
On a Reykjavik parking lot, a crowd of people brave the bitter cold to gather around a telescope set up by the Amateur Astronomical Society to observe the Moon and stars on December 21, 2010. (HALLDOR KOLBEINS/AFP/Getty Images) # 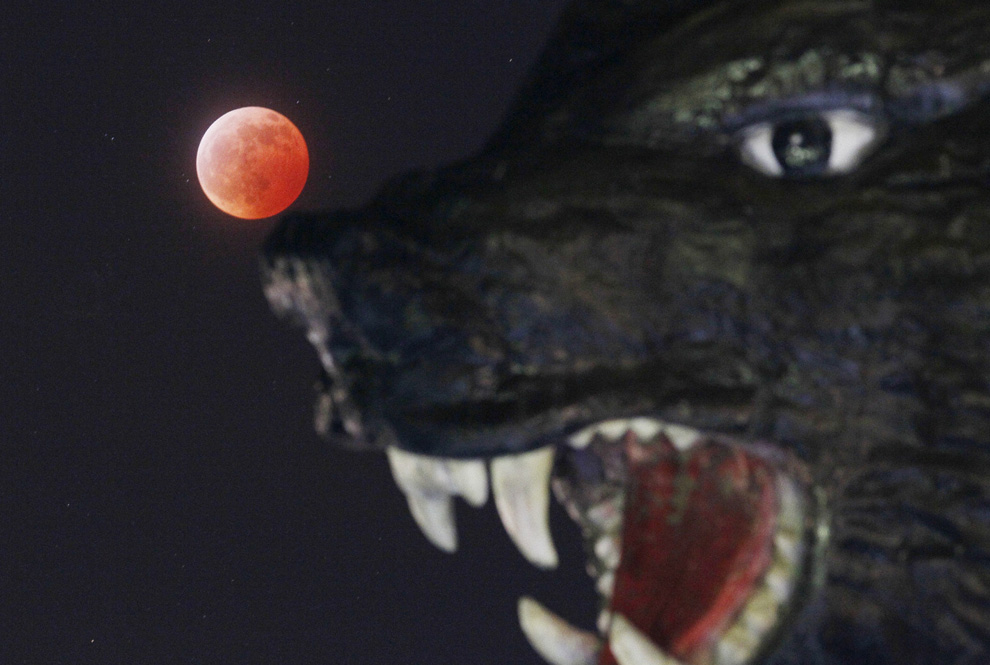 11
The eclipse of moon is seen behind a carving of a bear at a souvenir shop in Shiraoi, on Japan's northern island of Hokkaido on December 21, 2010. (REUTERS/Kyodo) # 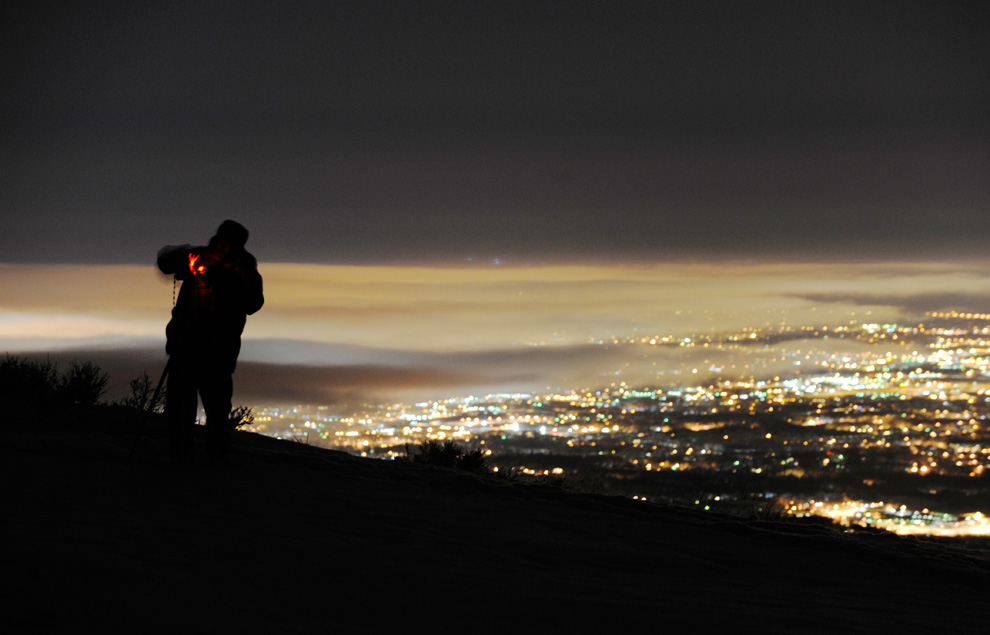 12
With the city lights of Anchorage, Alaska behind him, Drew Morris tries to photograph the lunar eclipse from the Glen Alps trailhead area of Chugach State Park on Monday, Dec. 20, 2010. (AP Photo/Anchorage Daily News, Marc Lester) # 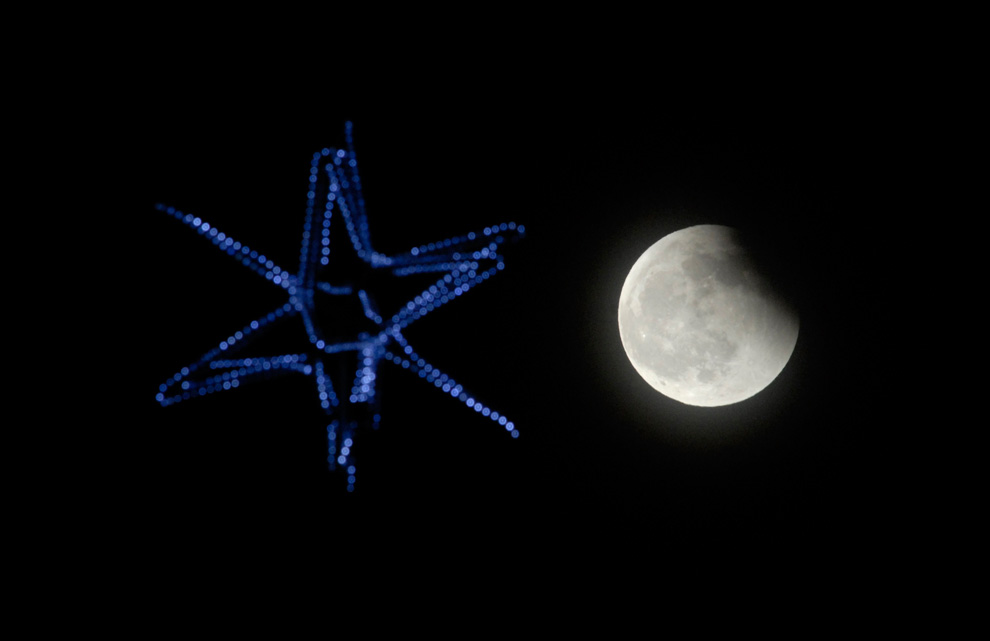 13
The shadow of the Earth falls across the face of the Moon, with a six-pointed decorative star on a Christmas tree in the foreground, above Russia's far eastern city of Vladivostok during a full lunar eclipse December 21, 2010. (REUTERS/Yuri Maltsev) # 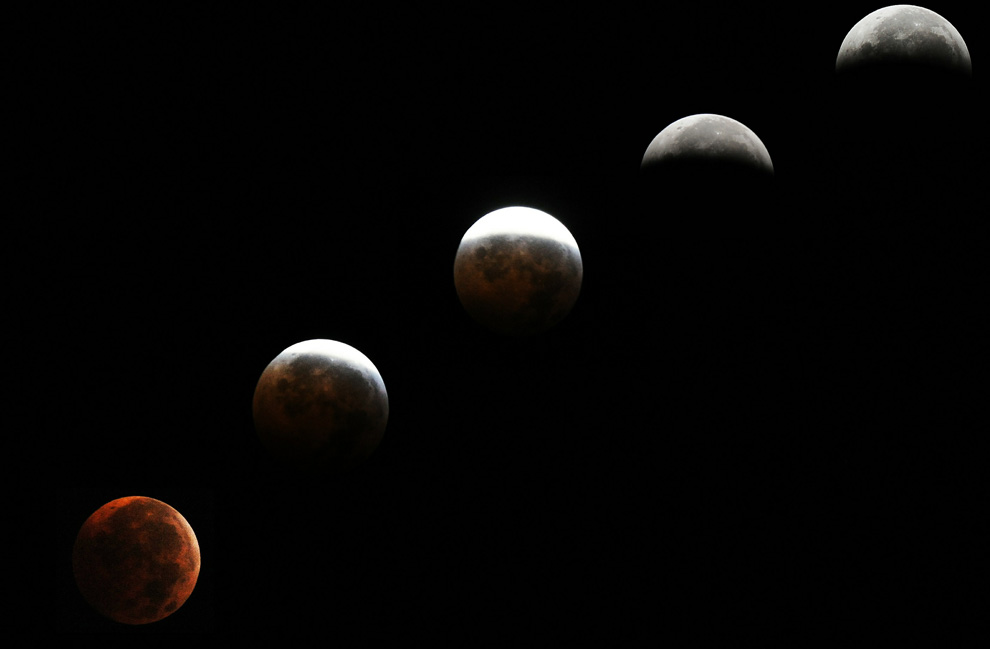 14
This combination of pictures shows the moon during a cycle of a total eclipse as seen from Silver Spring, Maryland, on December 21, 2010. (JEWEL SAMAD/AFP/Getty Images) # 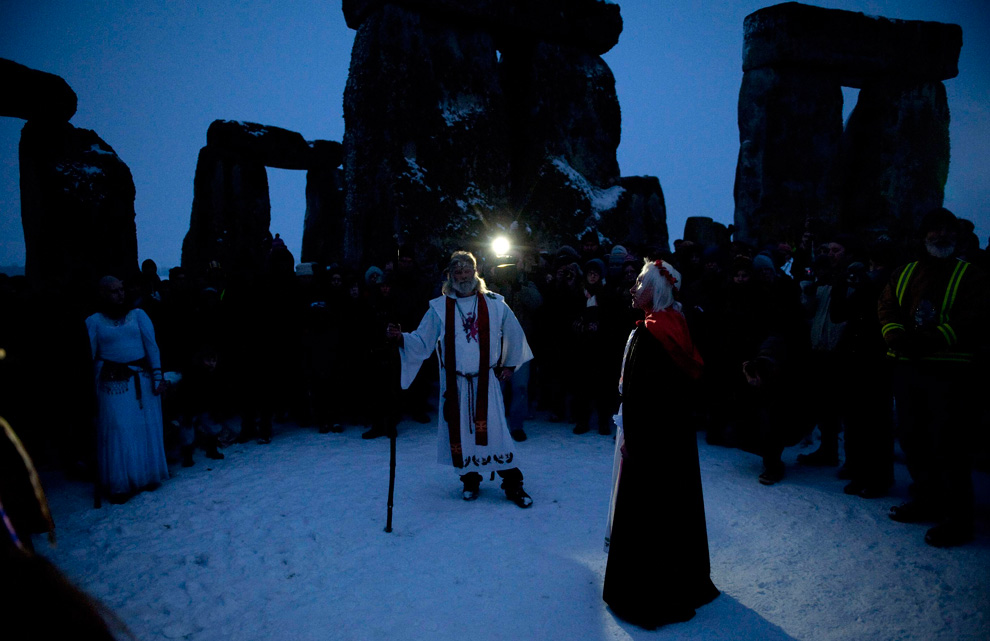 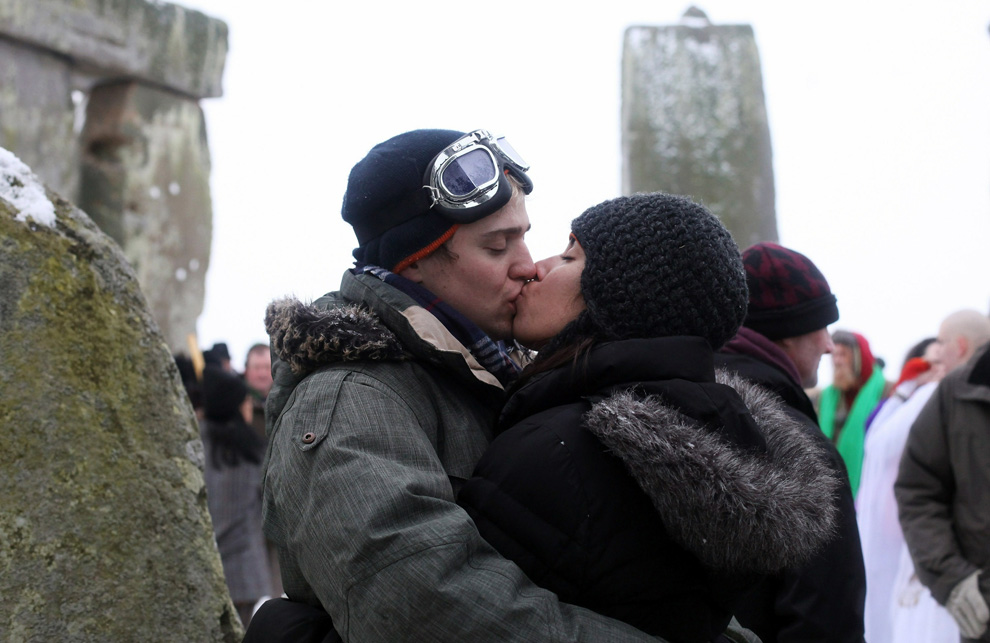 16
A couple kiss and embrace at a sunrise service at Stonehenge on December 22, 2010 in Wiltshire, England. Hundreds of people gathered at the famous historic stone circle to celebrate the sunrise closest to the Winter Solstice, the shortest day of the year. (Matt Cardy/Getty Images) # 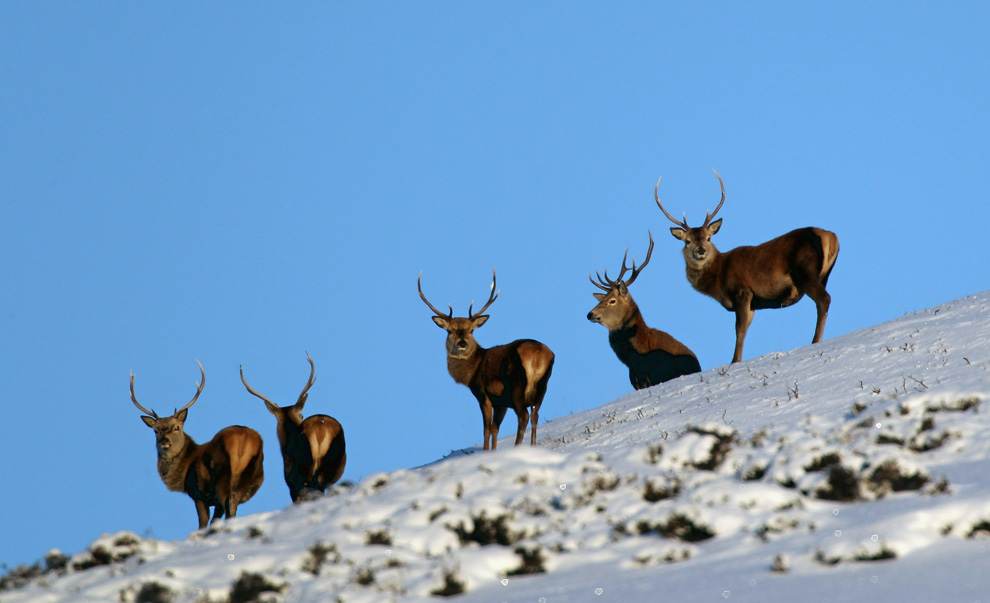 17
Deer forage for food in Glen Clunie on December 21, 2010 in Braemar, Scotland. Many parts of the UK are still experiencing severe disruption in what is becoming widely predicted as one of the coldest winters on record (Jeff J Mitchell/Getty Images) # 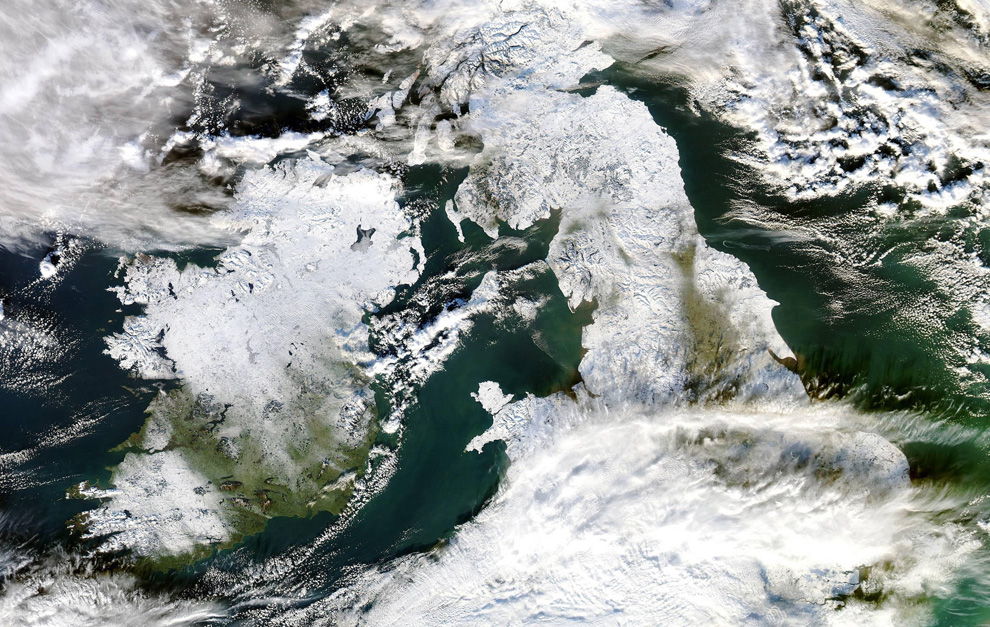 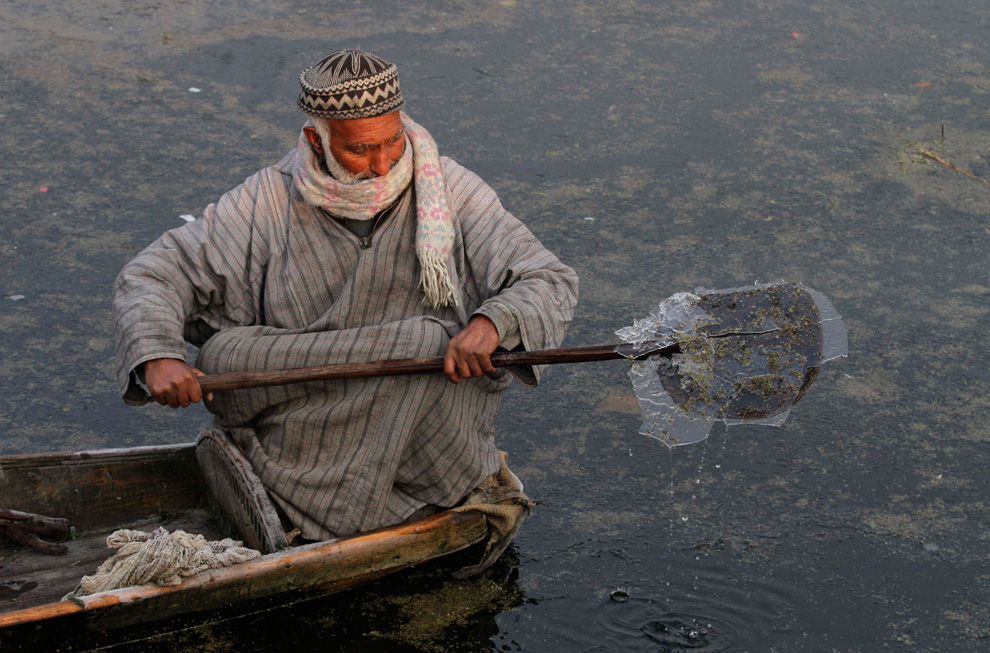 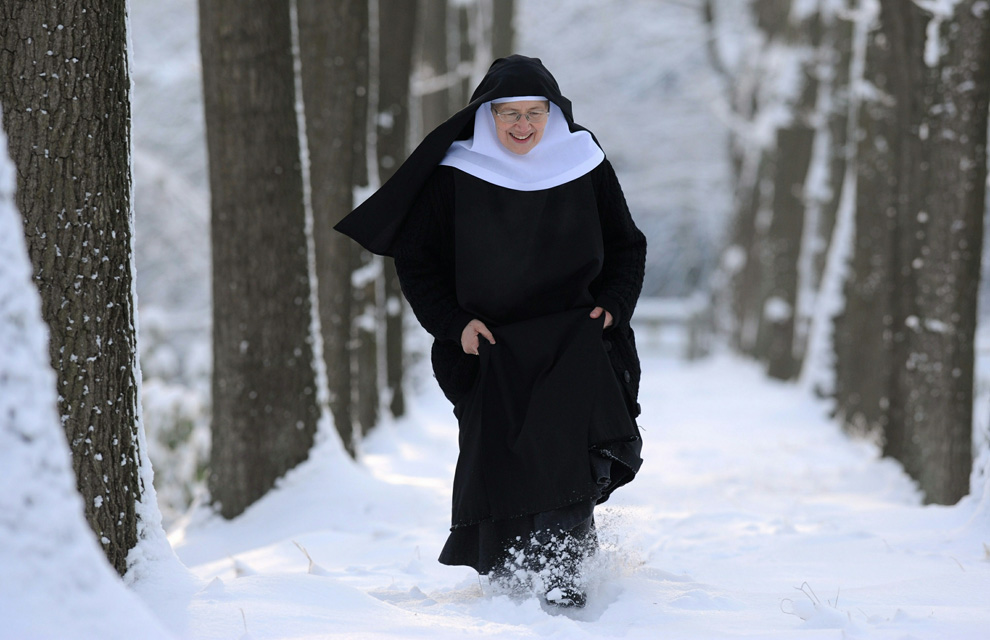 20
Sister Monica of the Benedictine abbey of the castle Dinklage, northwestern Germany walks through the snow on December 21, 2010. (INGO WAGNER/AFP/Getty Images) # 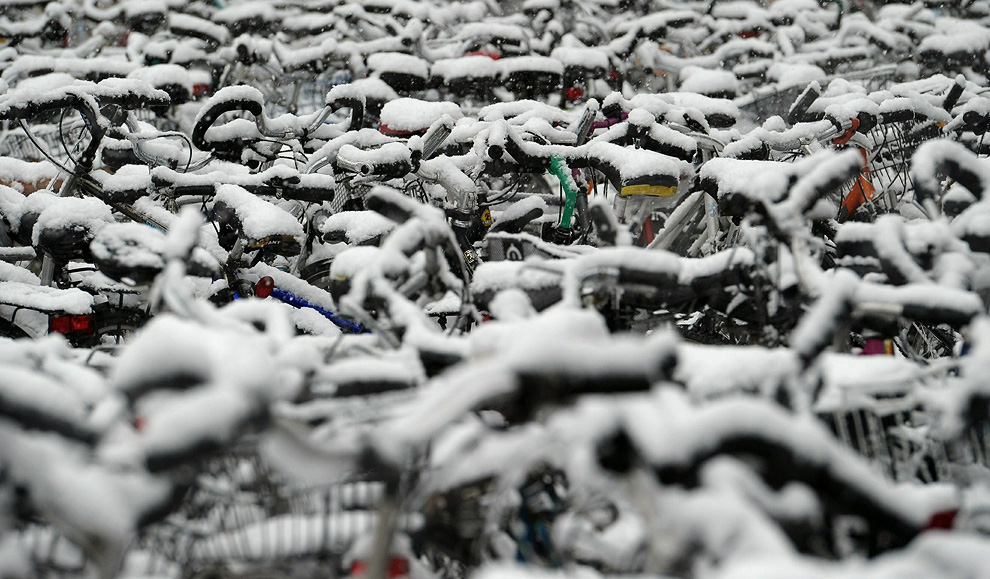 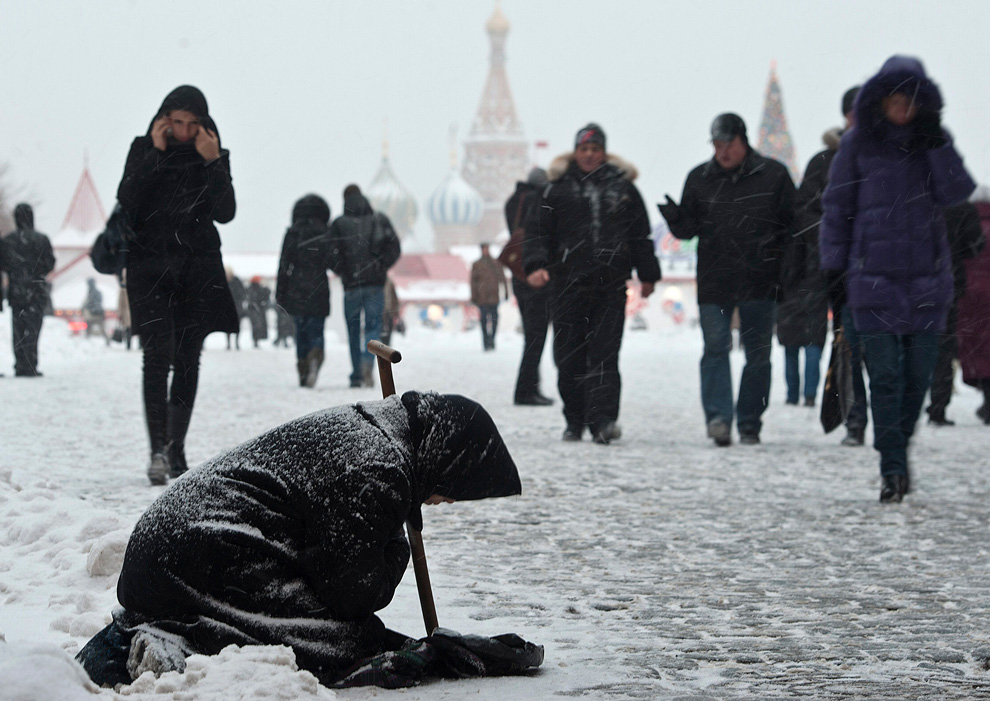 22
A woman begs for money during heavy snowfall in central Moscow, Russia on December 21, 2010. (REUTERS/Nikolay Korchekov) # 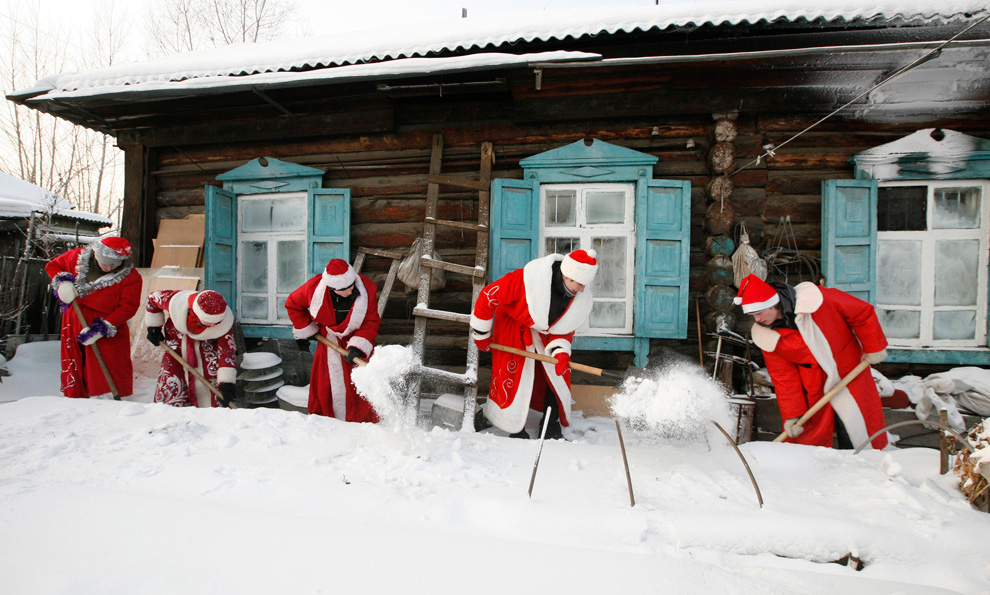 23
On the outskirts of Russia's Siberian city of Krasnoyarsk, schoolboys dressed as Father Frost remove snow in a courtyard owned by veteran of World War Two Nikolay Klipachev, 87, while the air temperature dipped to about -35 degrees Celsius (-31 degrees Fahrenheit) on December 21, 2010. The youngsters took part in the action to draw attention to the problems of elderly people. (REUTERS/Ilya Naymushin) # 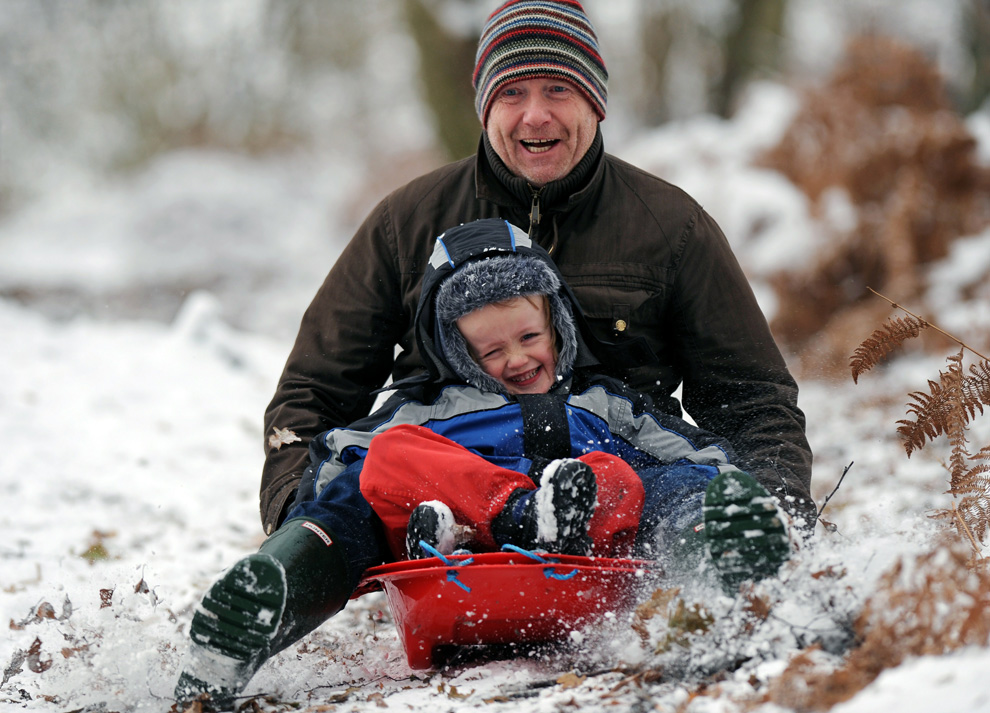 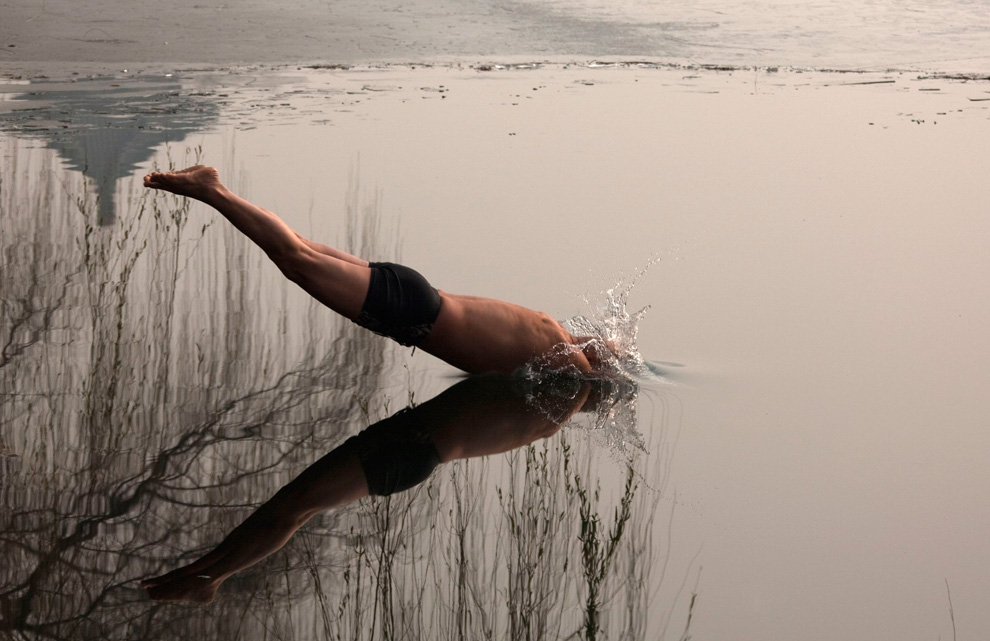 25
A swimmer dives into the icy water as the roof of a tower is reflected in the Houhai Lake during winter in central Beijing, China on December 21, 2010. (REUTERS/Petar Kujundzic) #