Dogsleds are in the news lately, as several races have recently taken place around the Northern Hemisphere, and as transportation choices for both a meeting of the G-7 and the start of the 2010 U.S. census. Mushers brought representatives to Iqaluit, a small village in Nunavut Territory, chosen to host a recent G-7 meeting, in part so Canada could assert sovereignty over its part of the Arctic. The 2010 U.S. Census, as per tradition, kicked off its count on January 25th in a rural part of Alaska in the small village of Noorvik, as census takers arrived by dogsled. And recent dogsled races include Le Grand Odyssee, the Sedivackuv Long, Pirena, the Aviemore Husky Sled Dog Rally and many more smaller regional competitions. Collected here are a handful of recent photos of sleds, dogs, and their humans. (30 photos total) 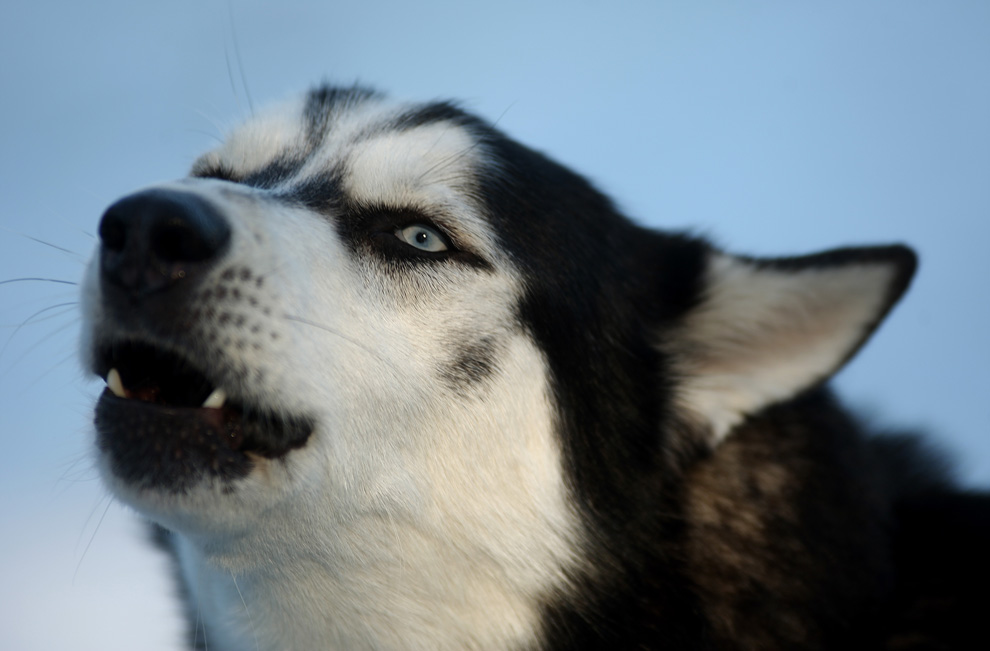 Three-year-old J-Sun Inti howls to the tunes of his owner's harmonica. He is part of the Boston Snowdogs dog slead team out of Dorchester as they awaited to take part in the Myopia dog sled competition on Saturday January 16, 2010 in Hamilton, Massachusetts. J-Sun Inti was a rescue dog and was adopted in Peru, his name means "son of the sun" in the Tarahumara language. (Essdras M Suarez/ Globe Staff) 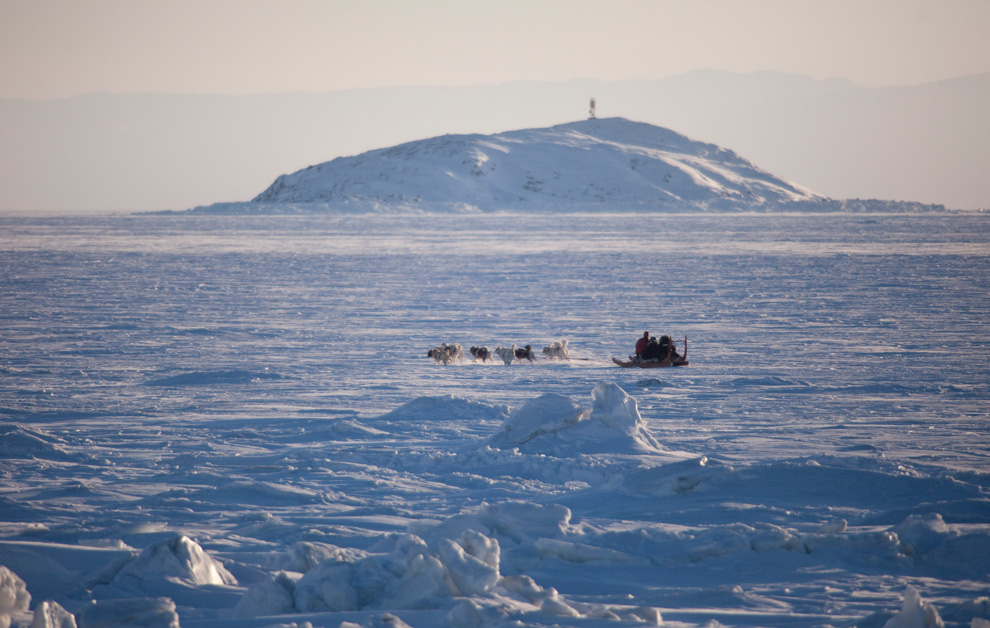 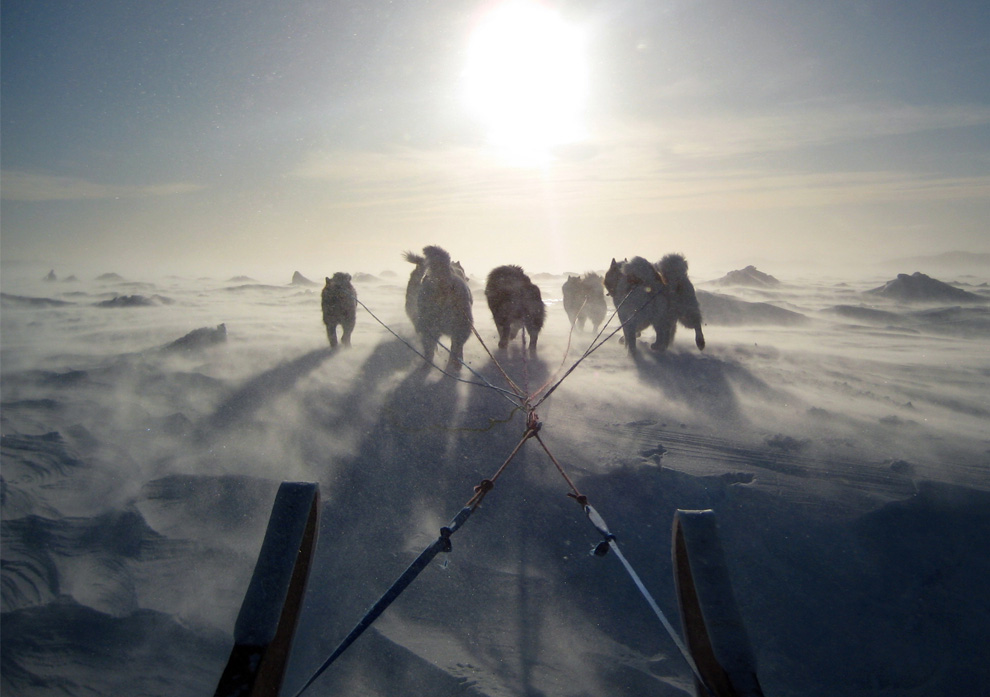 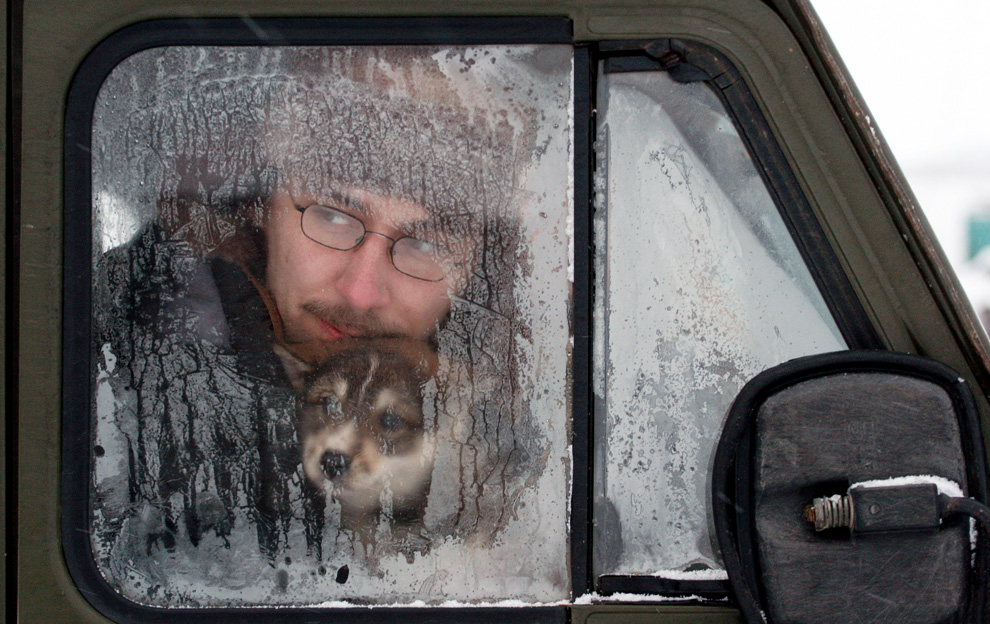 4
A man looks through the window with his dog at a kennel for breeding and training hunting and sled dogs outside Orsha, 240 km from the Belarus capital Minsk, on February 5, 2010. (ALEXEY GROMOV/AFP/Getty Images) # 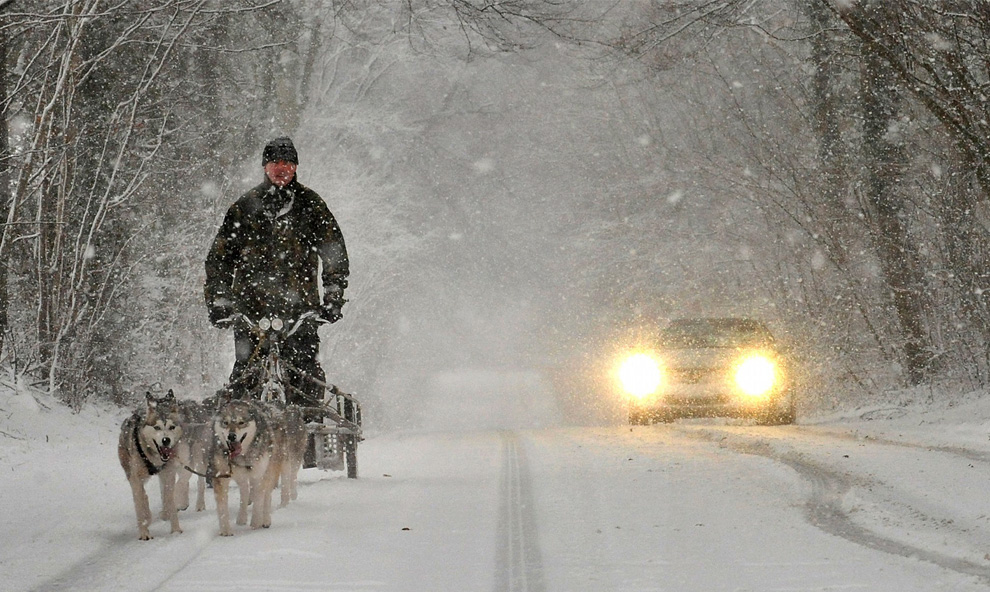 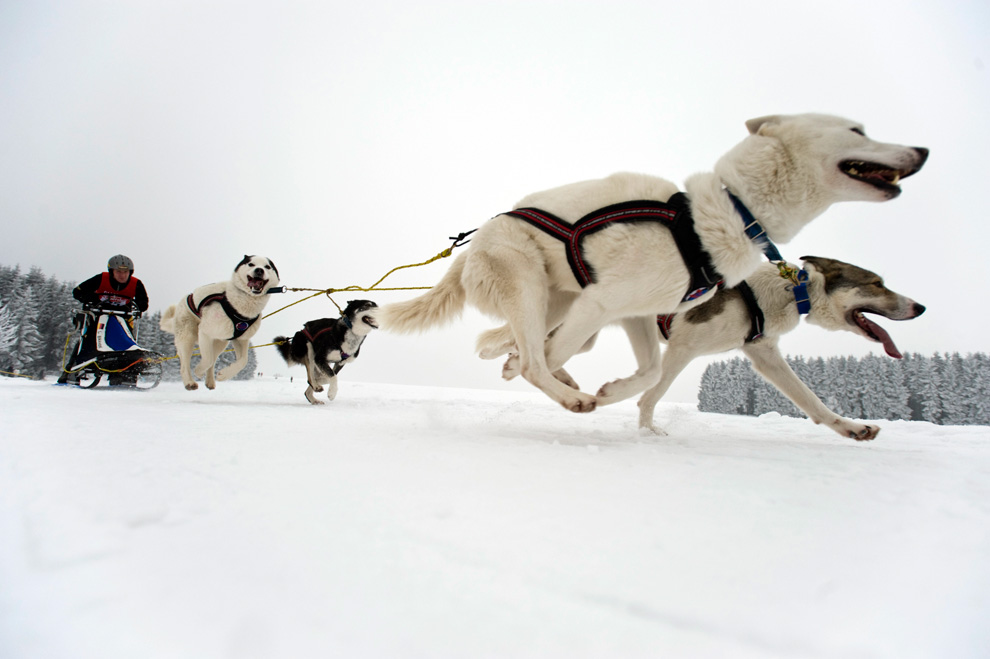 6
A musher competes with four Siberian huskies during the 18th dog sledding in Benneckenstein, central Germany on January 24, 2010. Some 54 mushers with over 200 sled dogs took part in the event. (JENS SCHLUETER/AFP/Getty Images) # 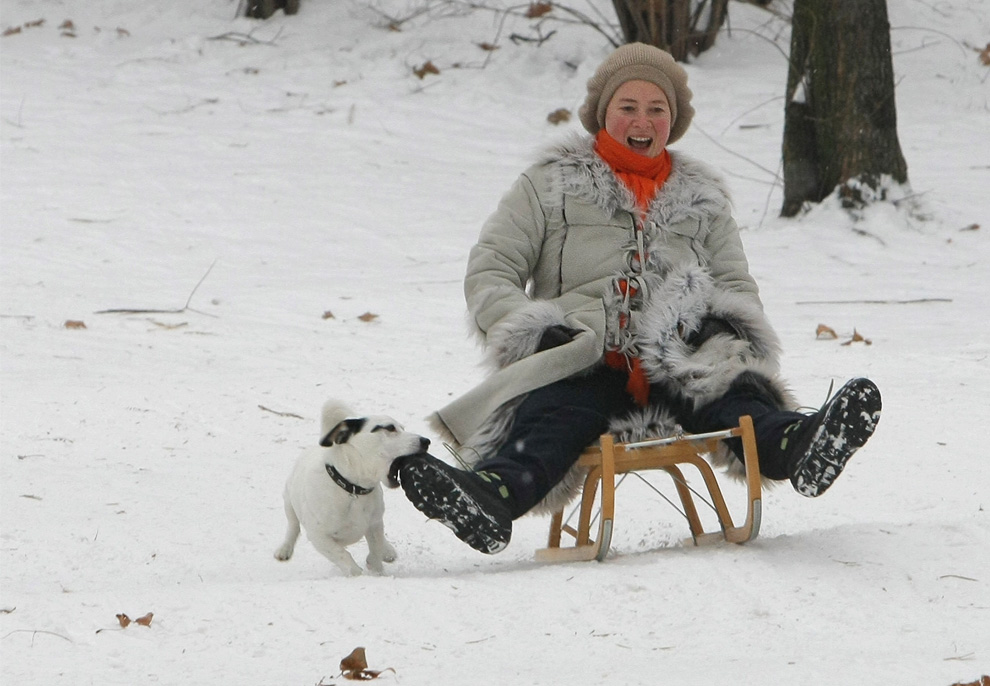 7
A woman enjoys a sled ride with her dog at Lietzensee park on January 6, 2010 in Berlin, Germany. (Andreas Rentz/Getty Images) # 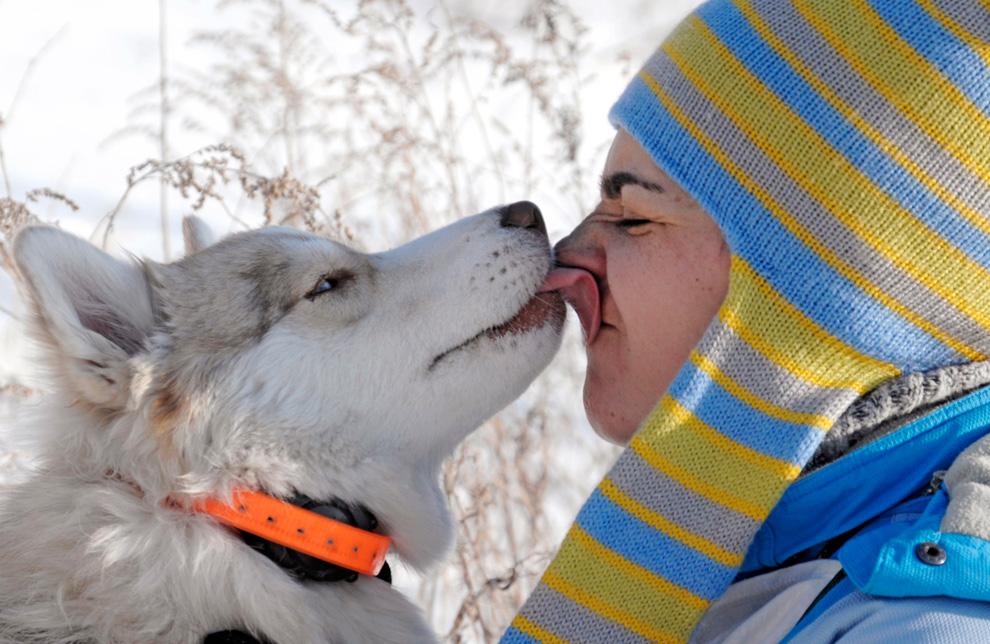 8
A Siberian Husky licks its owner after finishing in a Sled Dog competition in Russia's far eastern city of Vladivostok, January 9, 2010. (REUTERS/Yuri Maltsev) # 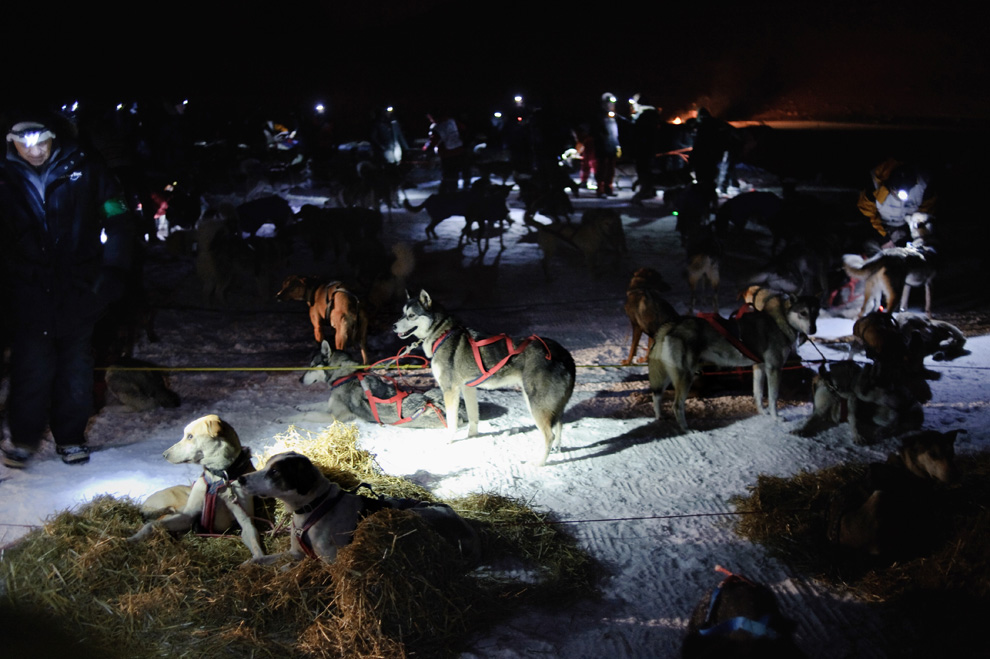 9
Sled dogs and their mushers prepare to bivouac at the Mount Cenis (Mont Cenis) polar base after the first leg of the "Grand Odyssee" sixth edition, from Lanslebourg to Haute Maurienne Vanoise, early on January 17, 2009. Twenty of the world best teams and 350 dogs compete along a 1,000 km course held over three days in French Alps. (JEAN-PHILIPPE KSIAZEK/AFP/Getty Images) # 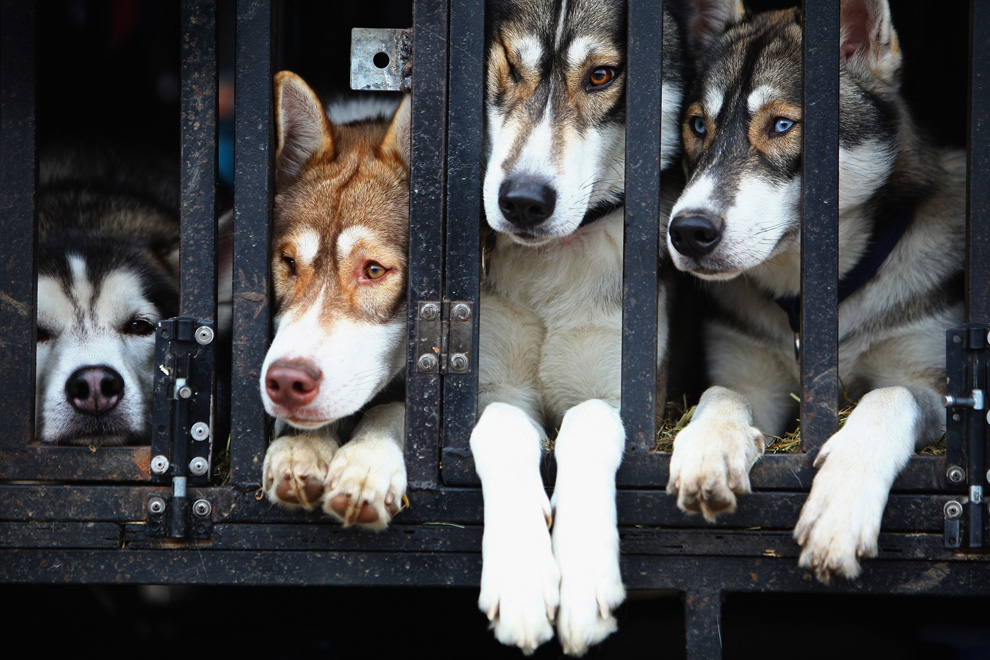 10
Huskies look out from their pen as competitors prepare for the 27th annual Aviemore Husky Sled Dog Rally beside Loch Morlich on January 21, 2010 in Aviemore, Scotland. (Jeff J Mitchell/Getty Images) # 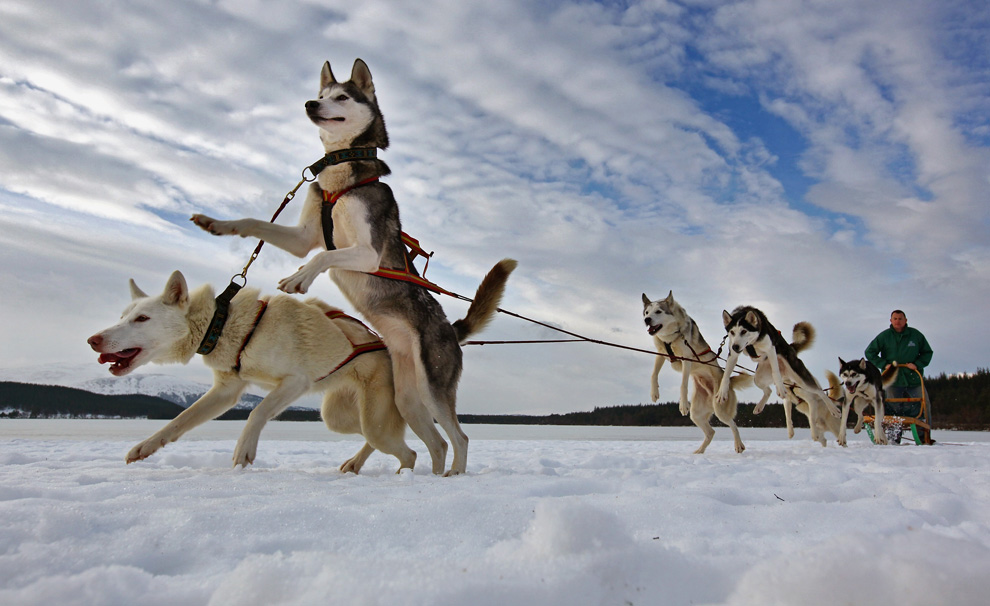 11
Pete Jones and his team prepare for the 27th annual Aviemore Husky Sled Dog Rally beside Loch Morlich on January 21, 2010 in Aviemore, Scotland. Over 1,000 dogs will take part in the biggest event in the Husky dog calendar this year which will be raced on snow for the first time in 15 years. (Jeff J Mitchell/Getty Images) # 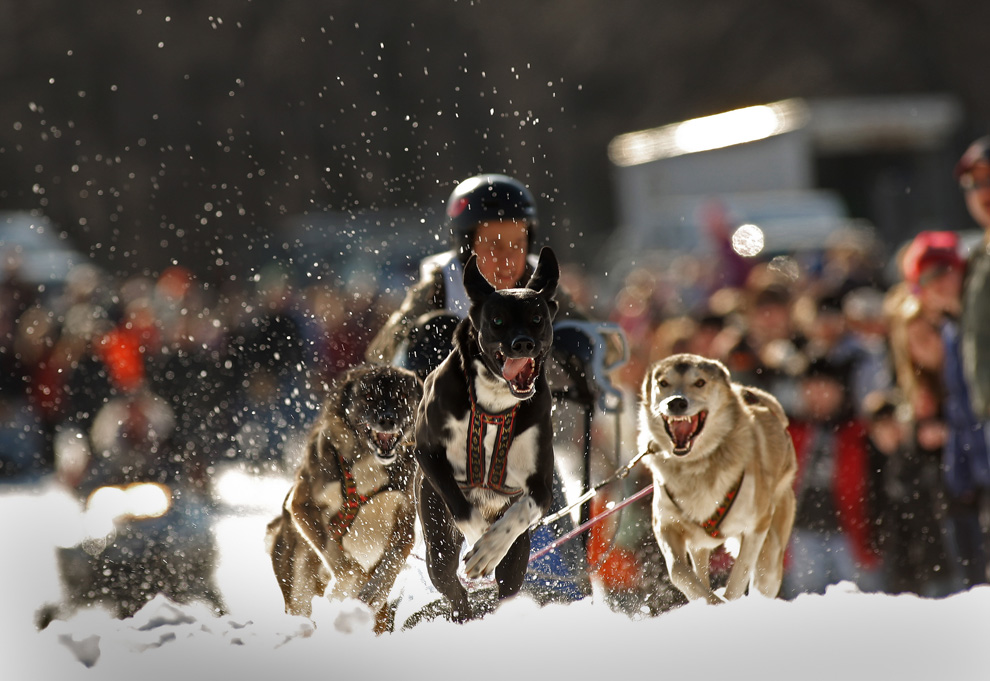 12
Twelve-year-old Bailey Cross Vitello of Brookfield, Massachusetts and his team churn up the snow at the beginning of the Myopia dog sled competition on Saturday, January 16, 2010 in Hamilton, Massachusetts. (Essdras M Suarez/Globe Staff) # 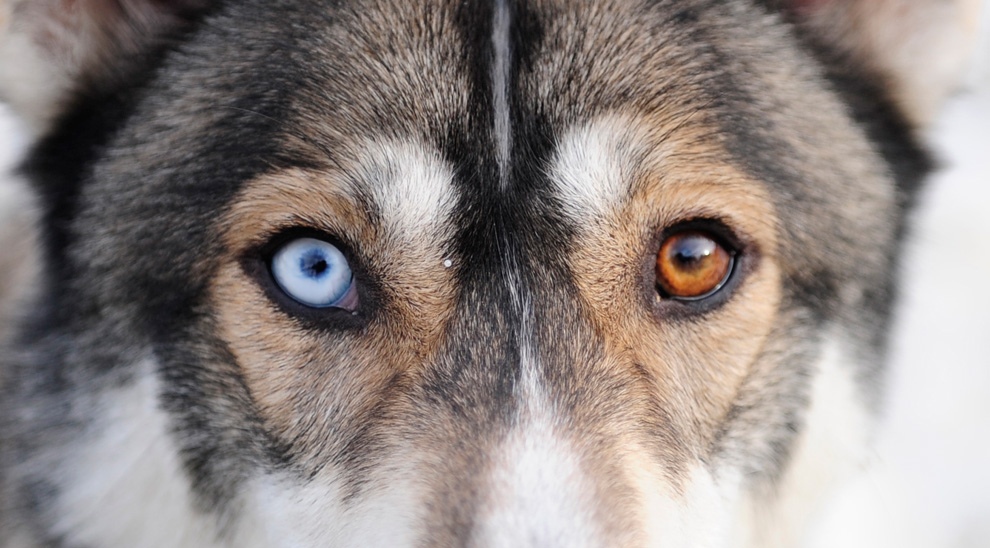 13
A sled dog waits in the snow before this weekend's sled dog Rally in Aviemore, Scotland January 21, 2010. (REUTERS/Russell Cheyne) # 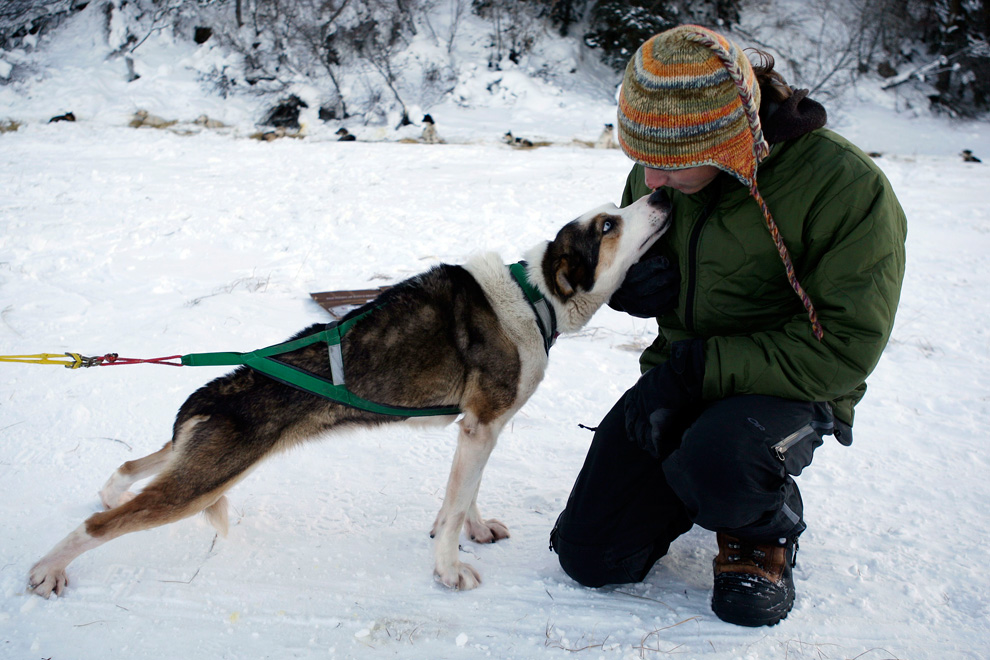 14
Musher Quin Iten, son of Iditarod sled dog race veteran Ed Iten, smooches lead sled dog Inga as they prepare to run a trail in the remote Inupiat Eskimo village of Noorvik, Alaska, Sunday, Jan. 24, 2010. Mushers were practicing for the arrival of the U.S. Census Bureau Director Robert Groves to formally launch the nation's 2010 count in Noorvik, Alaska, where residents are planning a huge reception of traditional dancing and a feast of caribou, moose and other foods. (AP Photo/Carolyn Kaster) # 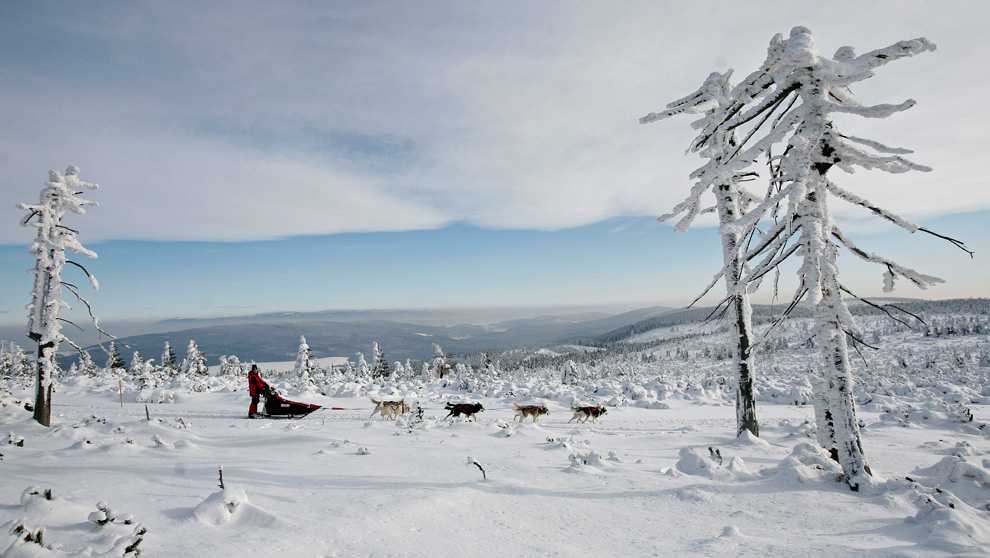 15
A musher rides his dog sled during the Sedivackuv Long dog sled race in Destne v Orlickych Horach, Czech Republic on January 27, 2010. Each year, racers from all over Europe arrive to the village of Destne in the Orlicke mountains in the Czech Republic to take part in this race series. (REUTERS/David W Cerny) # 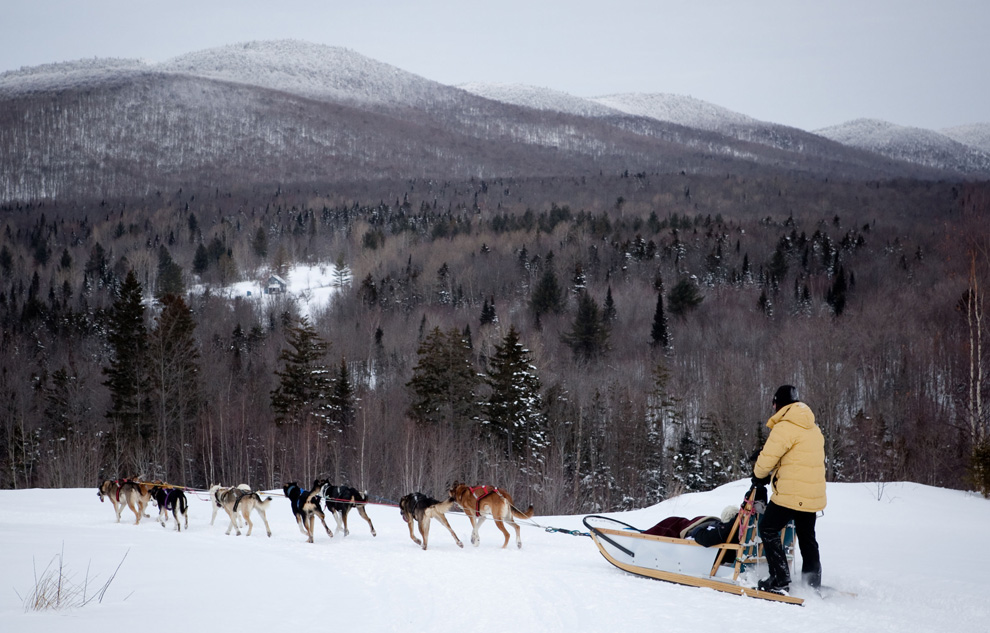 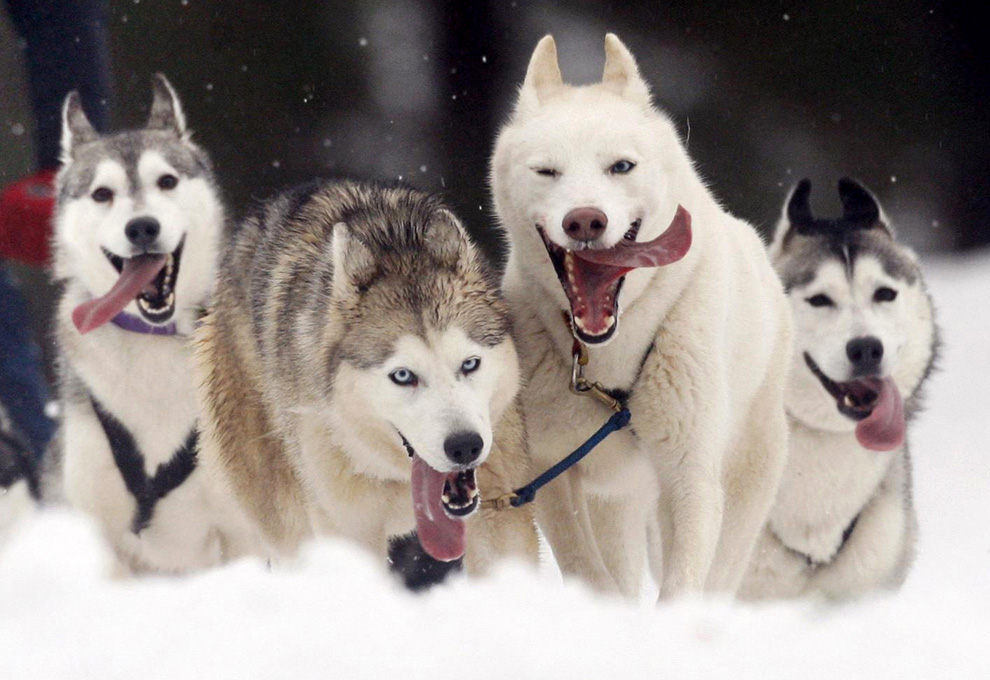 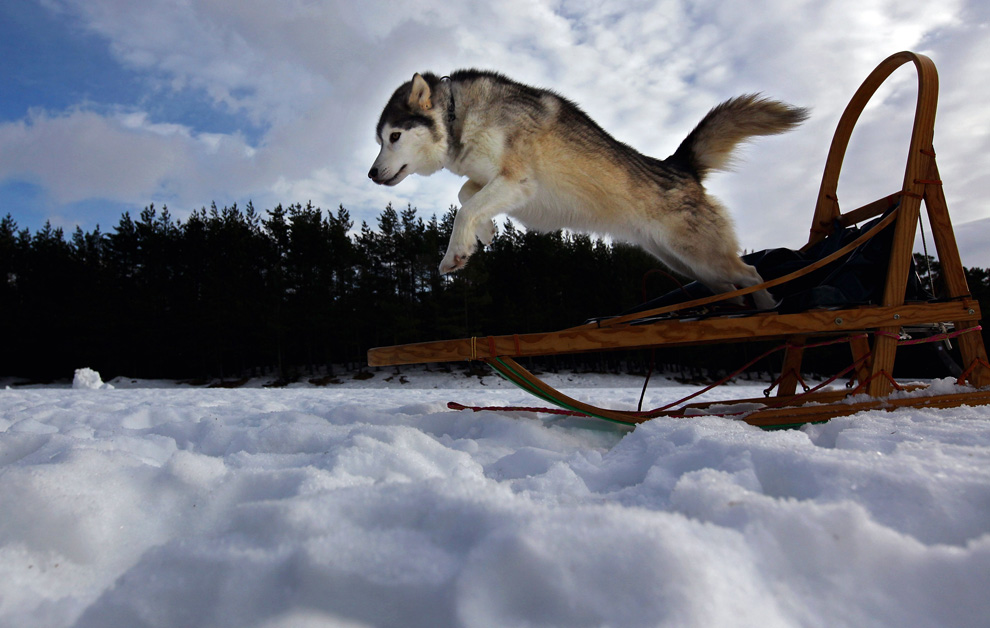 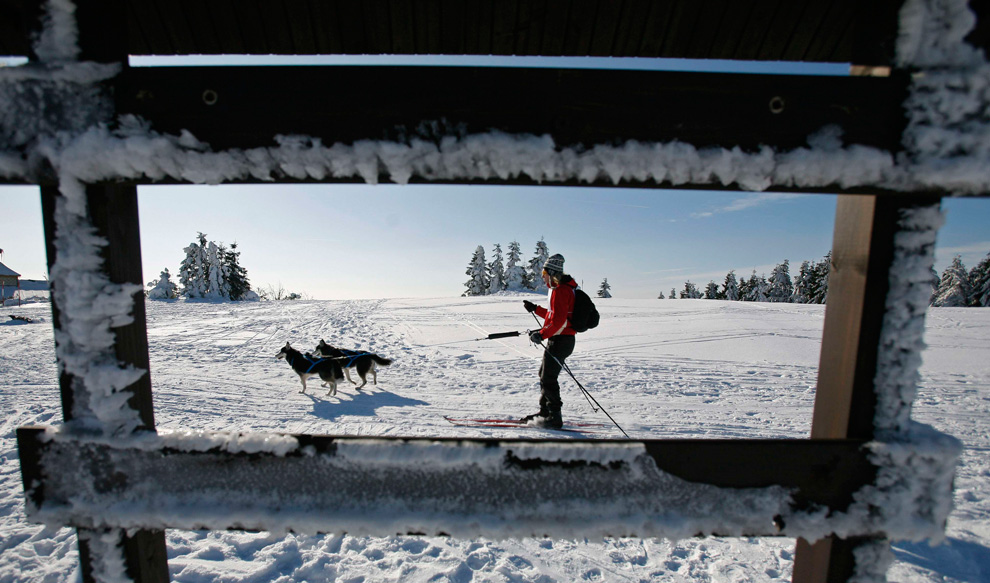 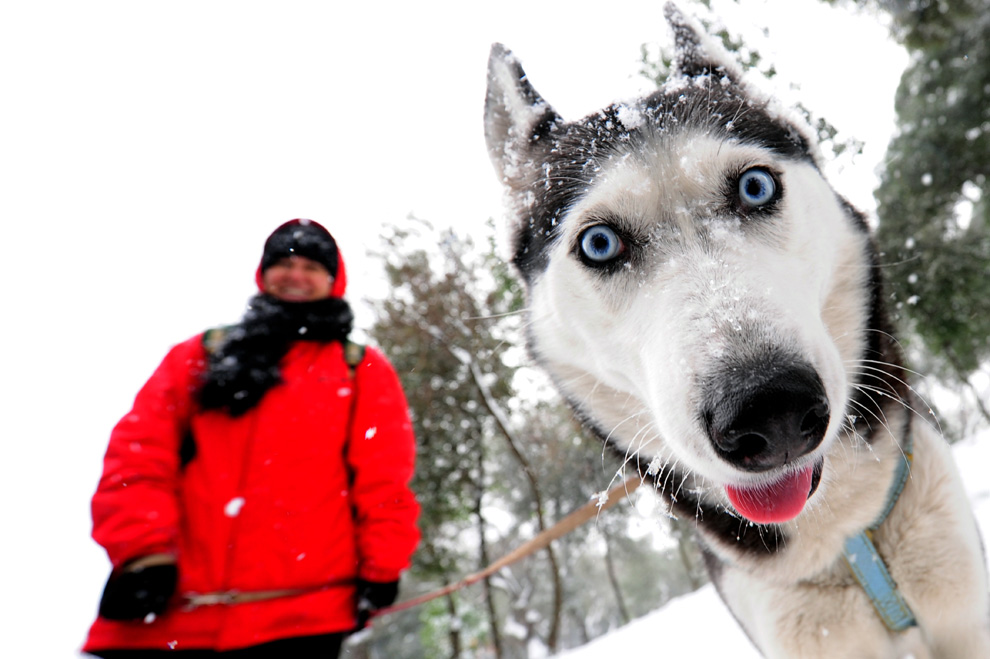 21
A woman walks her husky in Yildiz park in the center of Istanbul, Turkey, during a snowy day on January 25, 2010. (MUSTAFA OZER/AFP/Getty Images) #

22
A dog looks out of his cage before the start of Sedivackuv Long dog sled race in Destne v Orlickych Horach, Czech Republic on January 27, 2010. (REUTERS/David W Cerny) # 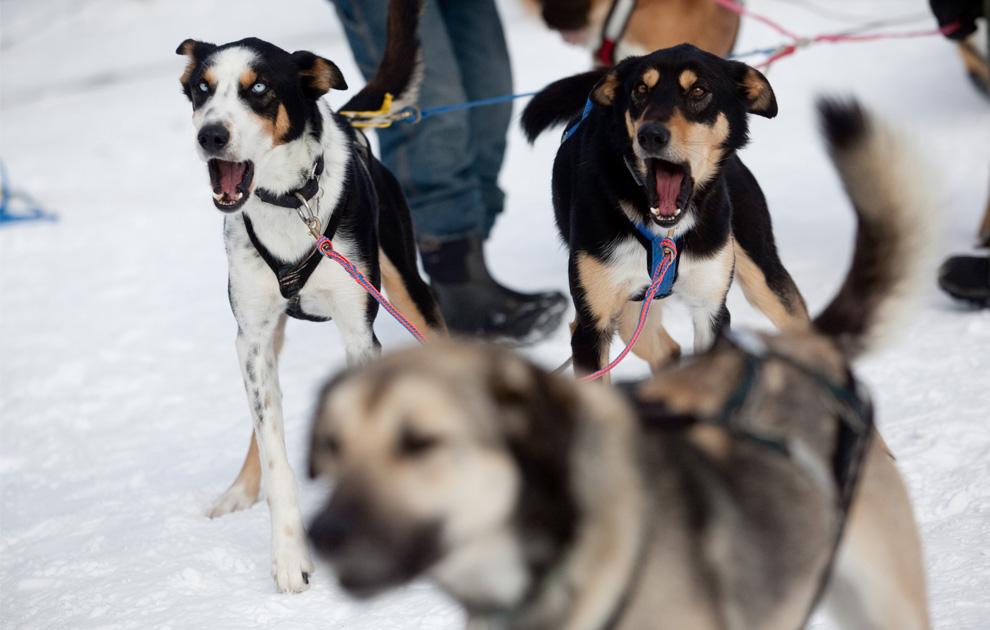 23
Eager sled dogs signal they are more than ready to pull their sled by barking in Eden Mills, Vermont on January 10th, 2010. (David Kamerman/Globe Photo) # 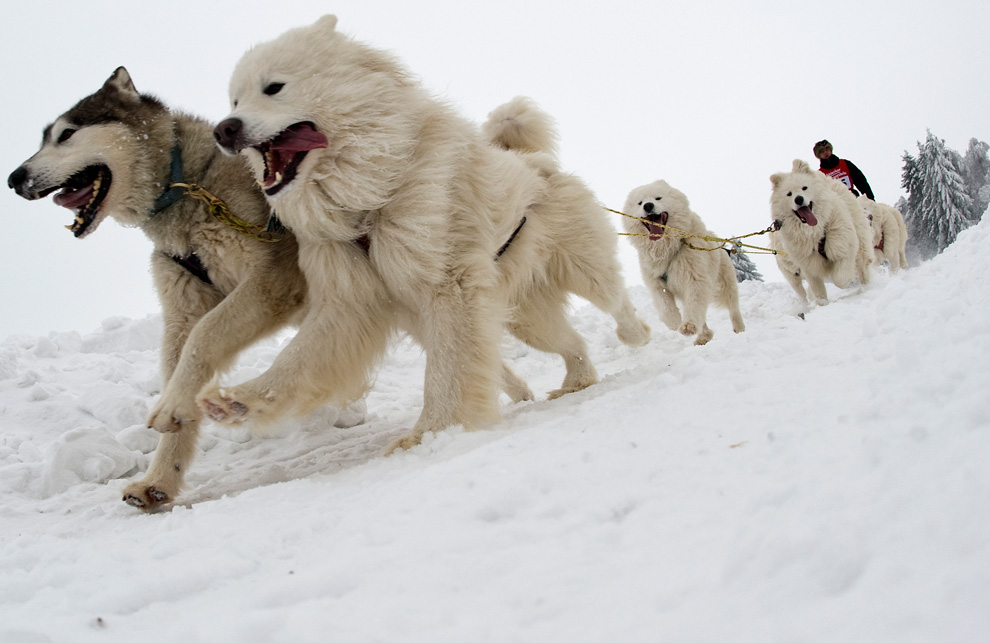 24
Hartwig Rackwitz and his dogs race in a sled dog competition near the eastern German town of Hasselfelde on January 10, 2010. (JENS SCHLUETER/AFP/Getty Images) # 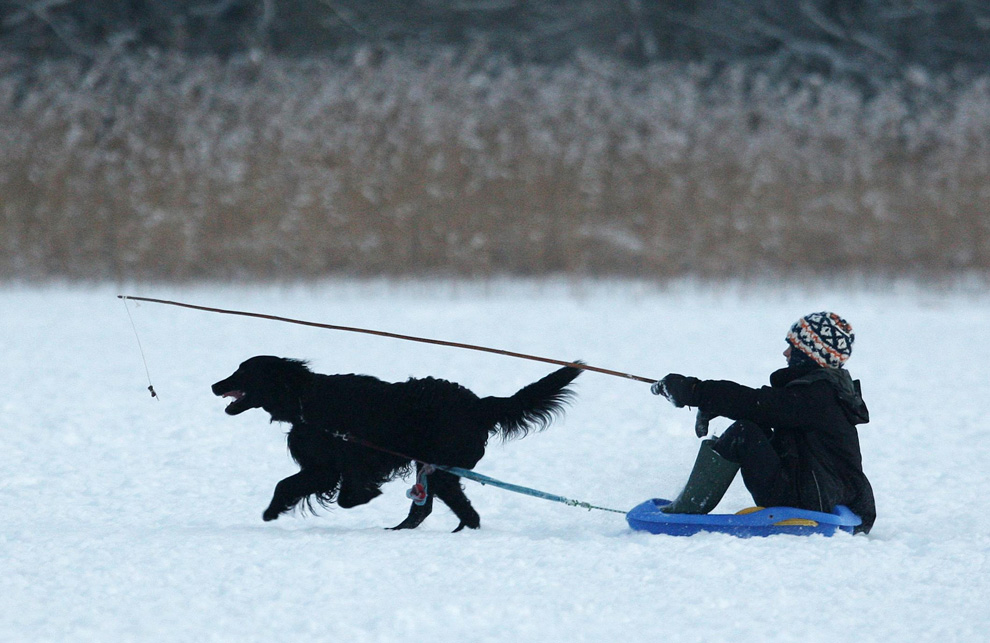 25
A treat is dangled in front of a dog as it pulls a sled across the frozen Lake of Menteith, in Scotland, Saturday Jan. 9, 2010. (AP Photo / Andrew Milligan) # 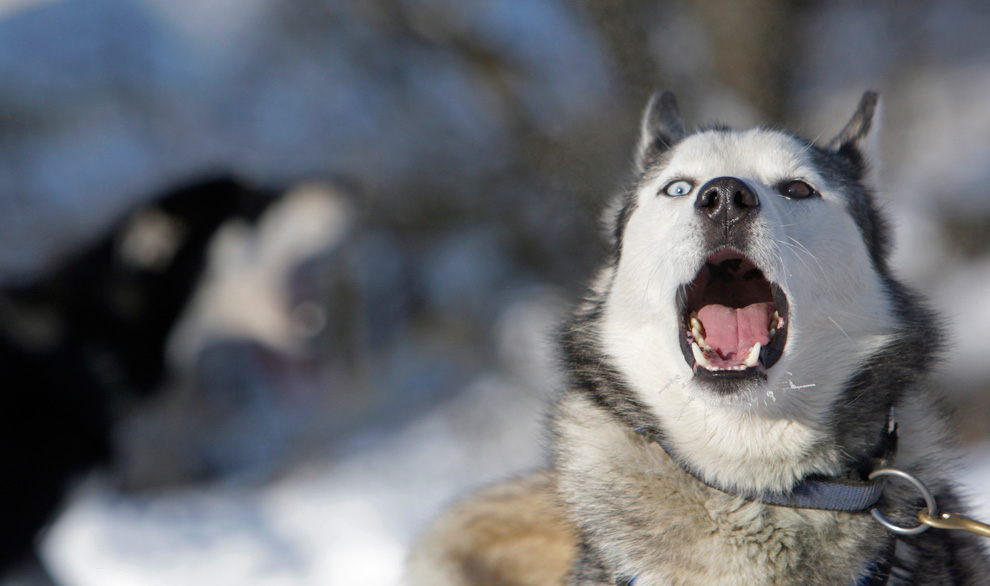 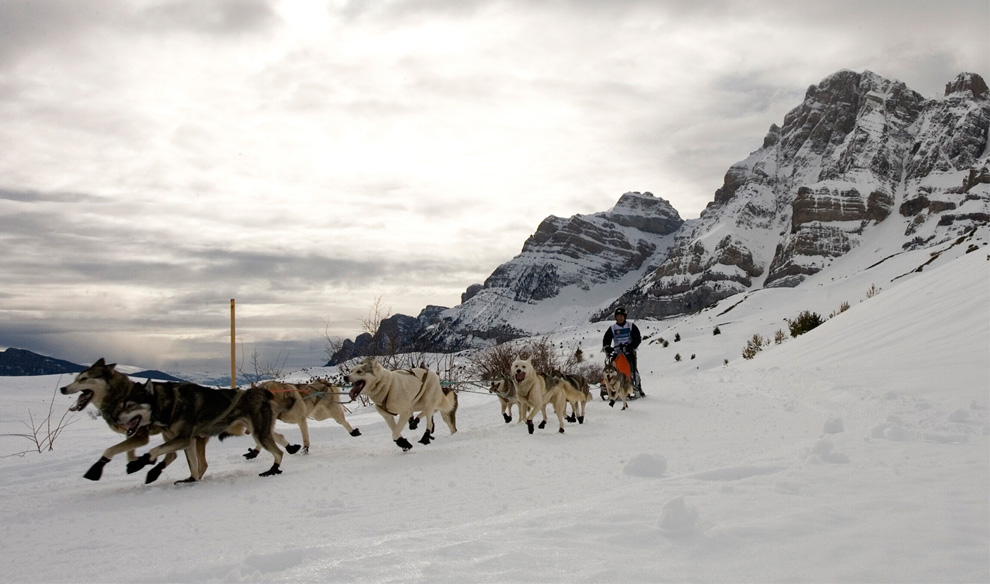 27
A musher guides his dog sled during the first stage of the Pirena 2010 sled dog race in La Partacua, in the Pyrenees mountains, northern Spain, January 24, 2010. (REUTERS/Joseba Etxaburu) # 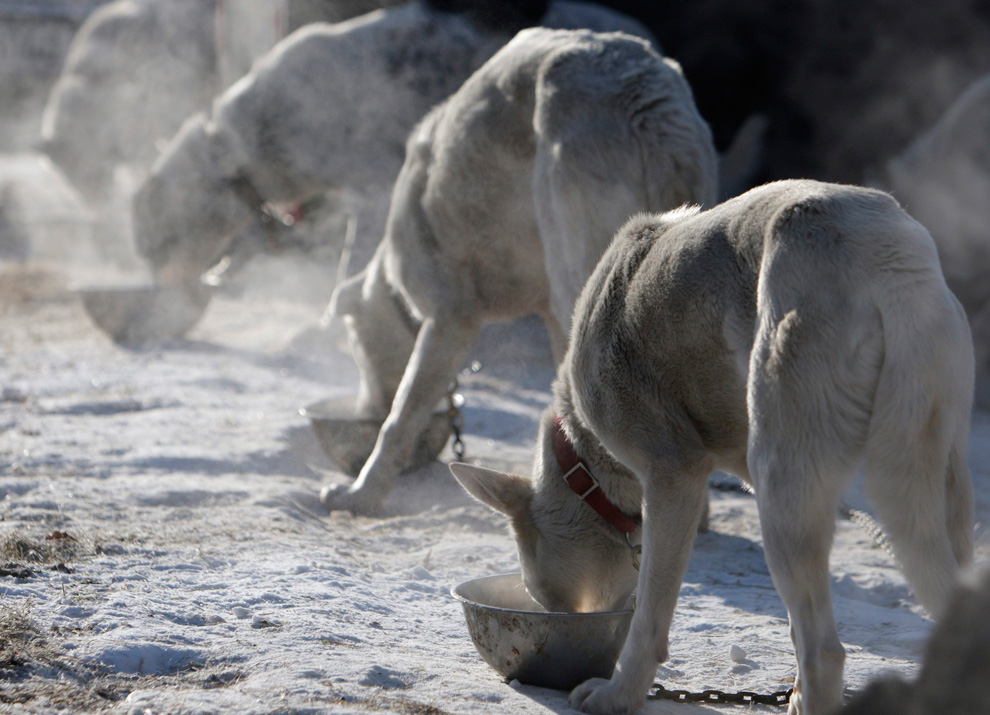 28
Dogs eat before the start of the Sedivackuv Long dog sled race in the Czech Republic on January 27, 2010. (REUTERS/David W Cerny) # 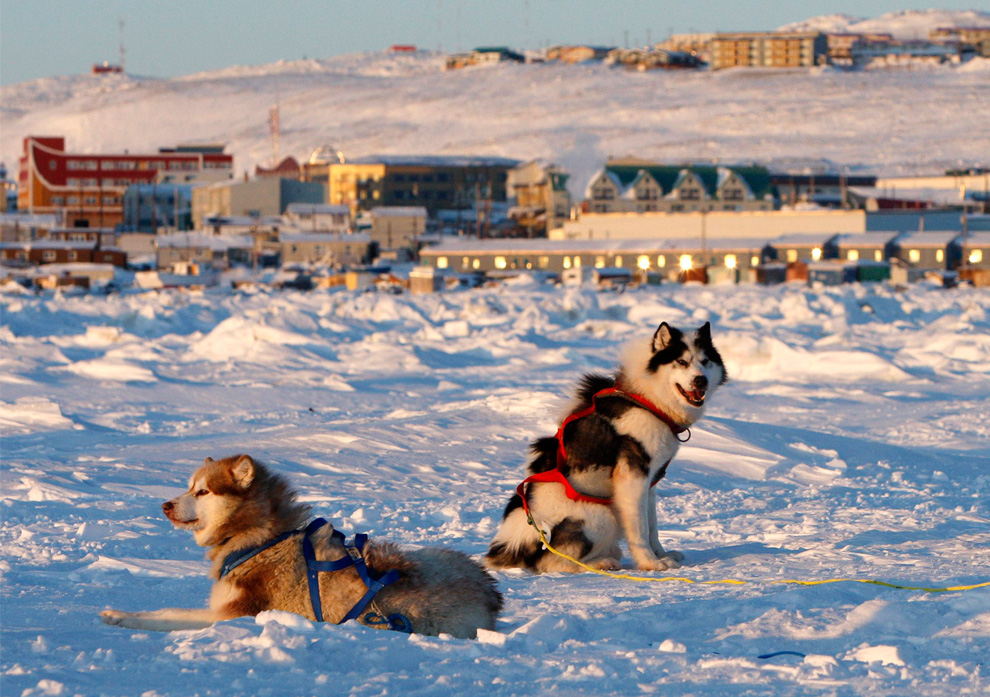 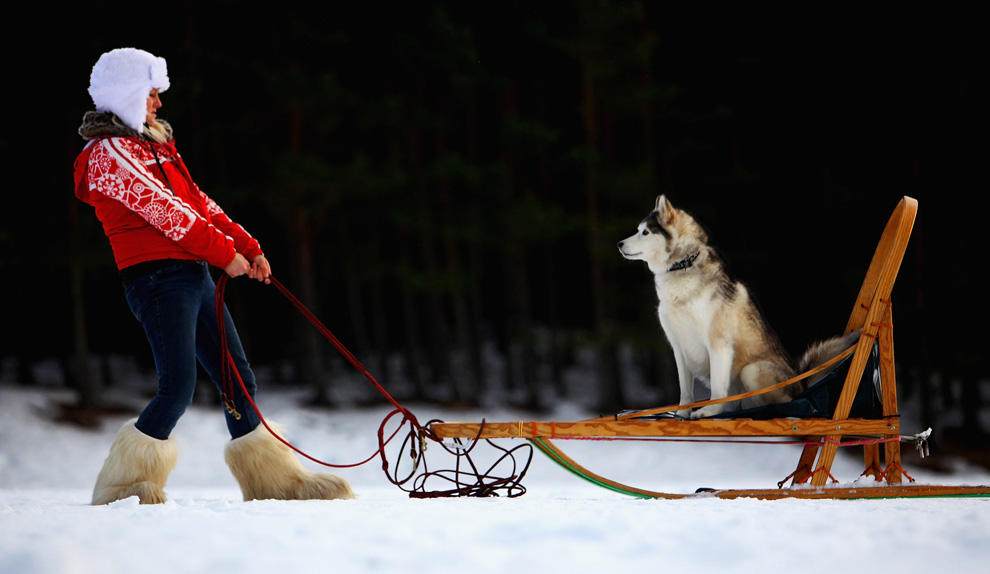