Supporters of the opposition to Iran's current ruling regime continue to gather, speak out, and protest - despite the risks of imprisonment, injury or death, and the continued official restrictions on foreign media coverage. On December 21st, 2009, thousands of Iranians attended a funeral ceremony for Grand Ayatollah Hossein Ali Montazeri, the spiritual father of Iran's reform movement, who had passed away at the age of 87. In the days following the funeral, mourners and protesters took to the streets defying an official ban on such memorial services. On the Muslim holy day of Ashoura, December 27th, protesters and riot police clashed in multiple locations in Tehran, leaving many injured and between 8 and 37 protesters killed, including the nephew of opposition leader Mir Hossein Mousavi. Days later, on December 30th, the Iranian government organized its own protest - against the opposition - giving all civil servants the day off to attend, providing dozens of buses and free chocolate milk for demonstrators. Collected here are photos from the three days, most taken by anonymous photographers, acquired outside the country by press agencies who are restricted by the government ban. (33 photos total) 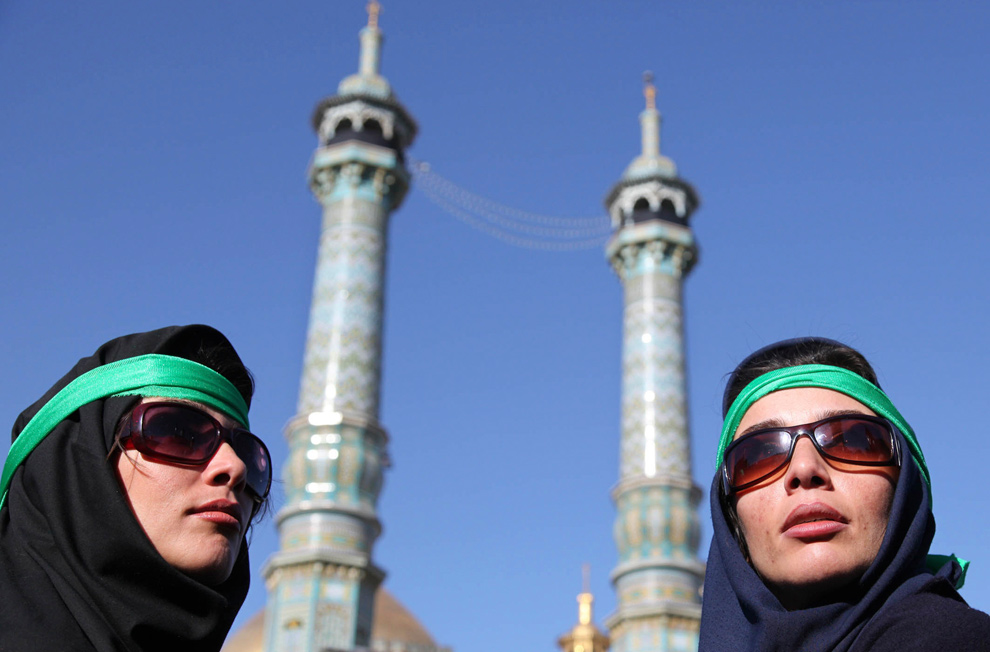 Two pro-reform Iranian women attend the funeral ceremony of Grand Ayatollah Hossein Ali Montazeri, the spiritual father of Iran's reform movement, as they wear green headbands, the symbolic color of Iranian opposition, in the holy city of Qom, 125 km (78 mi) south of the capital Tehran, Iran on Monday, Dec. 21, 2009. Montazeri, who died Sunday at the age of 87, was a key figure in the 1979 Islamic Revolution who later accused his fellow clerical leaders of imposing dictatorship in the name of Islam. (AP Photo) 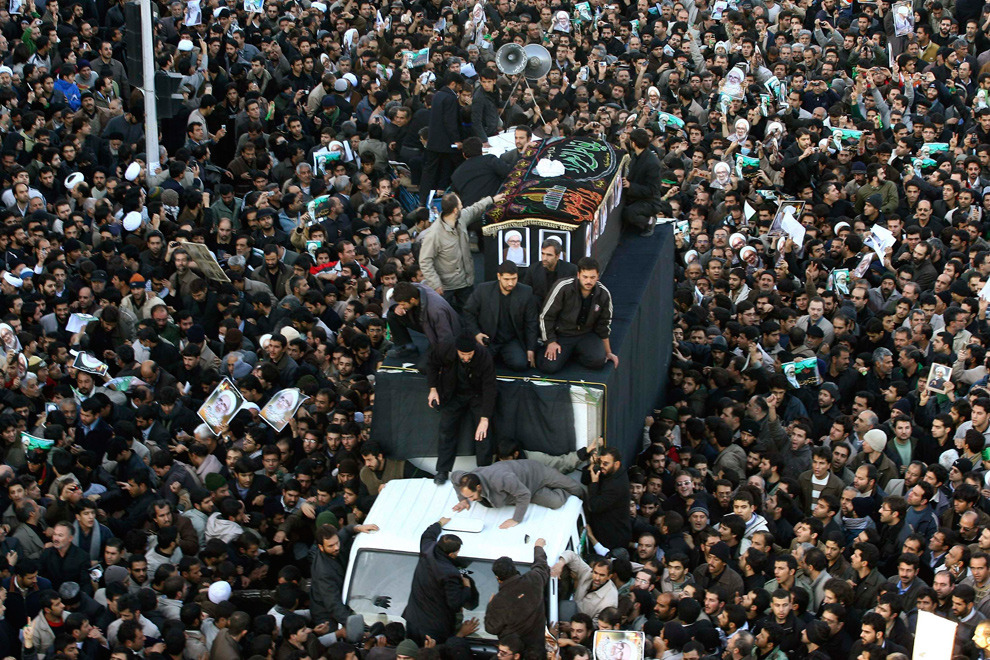 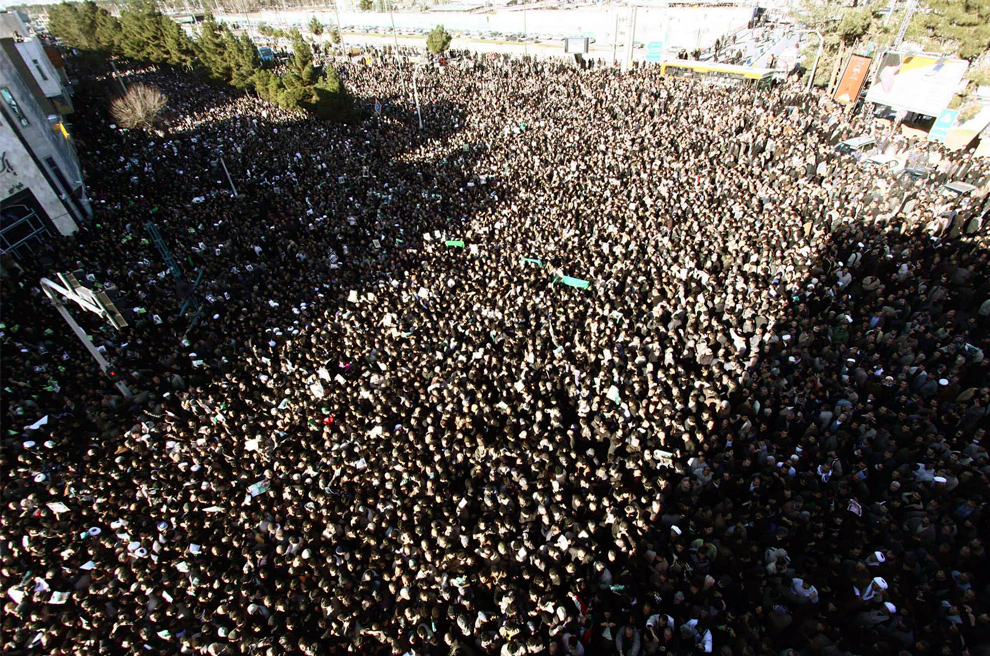 4
Pro-reform Iranians hold up photographs and green banners as they attend the funeral ceremony of Grand Ayatollah Hossein Ali Montazeri, in the city of Qom, Iran, Monday, Dec. 21, 2009. (AP Photo) # 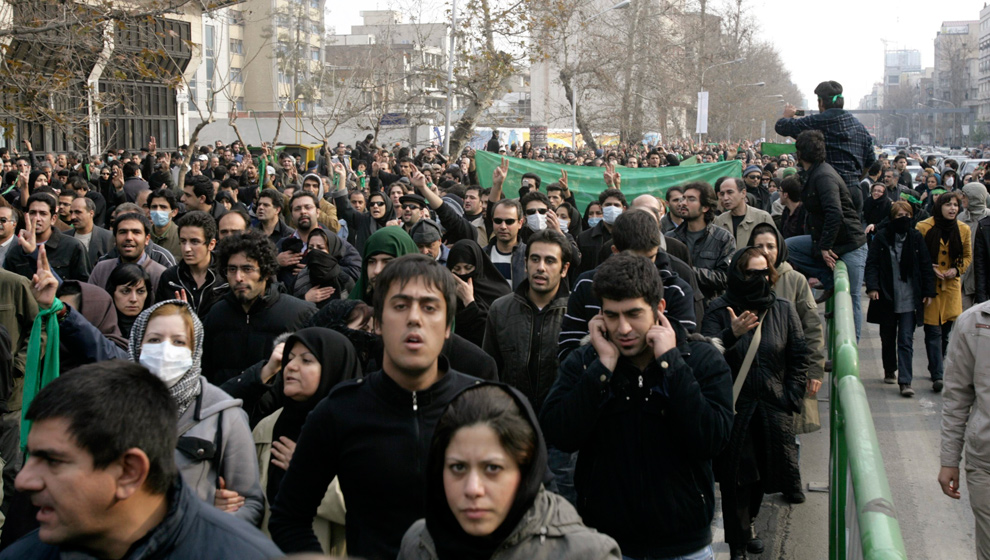 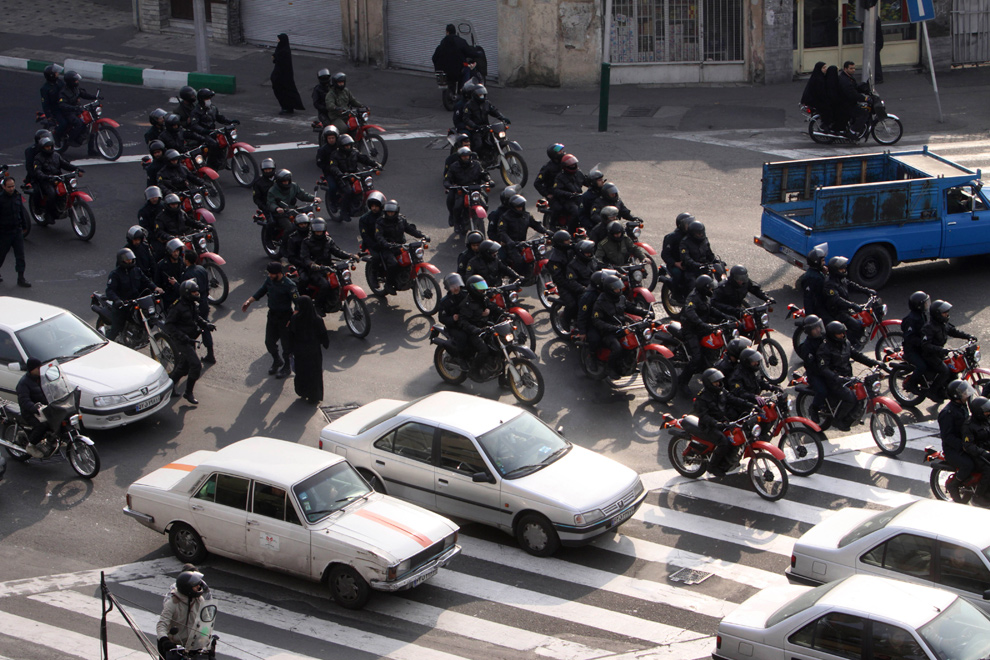 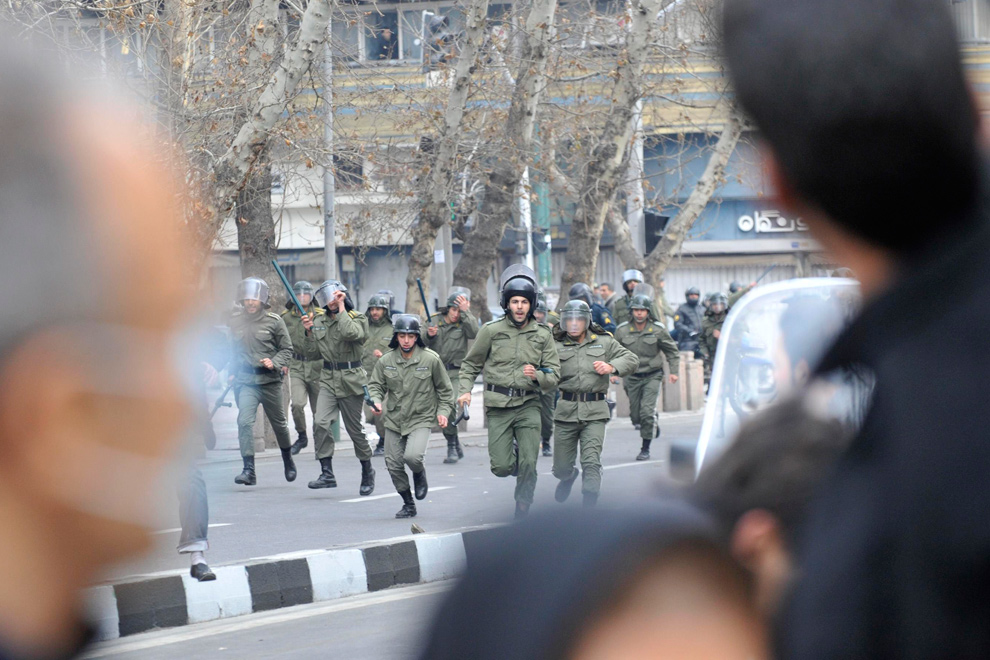 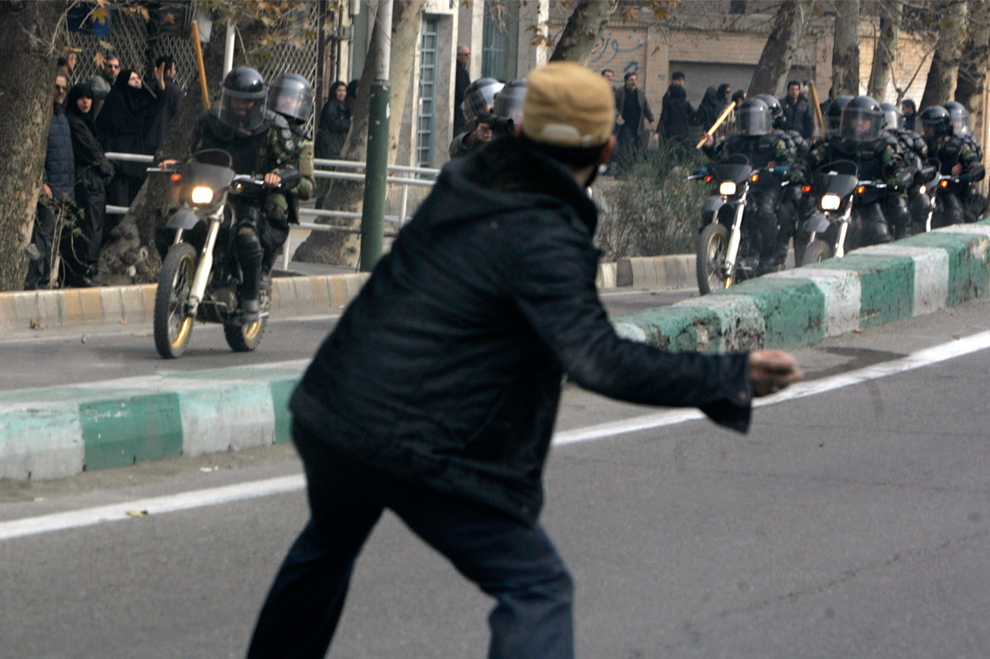 9
A protester throws a stone at riot police during fierce clashes in central Tehran on December 27, 2009. (REUTERS/Stringer) # 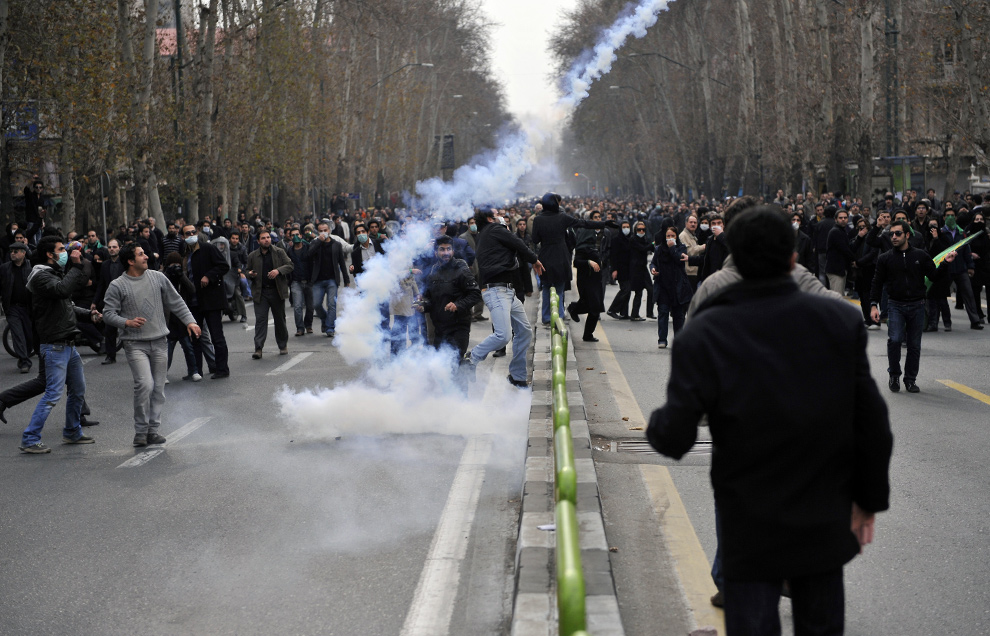 10
A teargas canister, fired towards Iranian opposition supporters, is thrown back during clashes with security forces in Tehran on December 27, 2009. (AFP/Getty Images) # 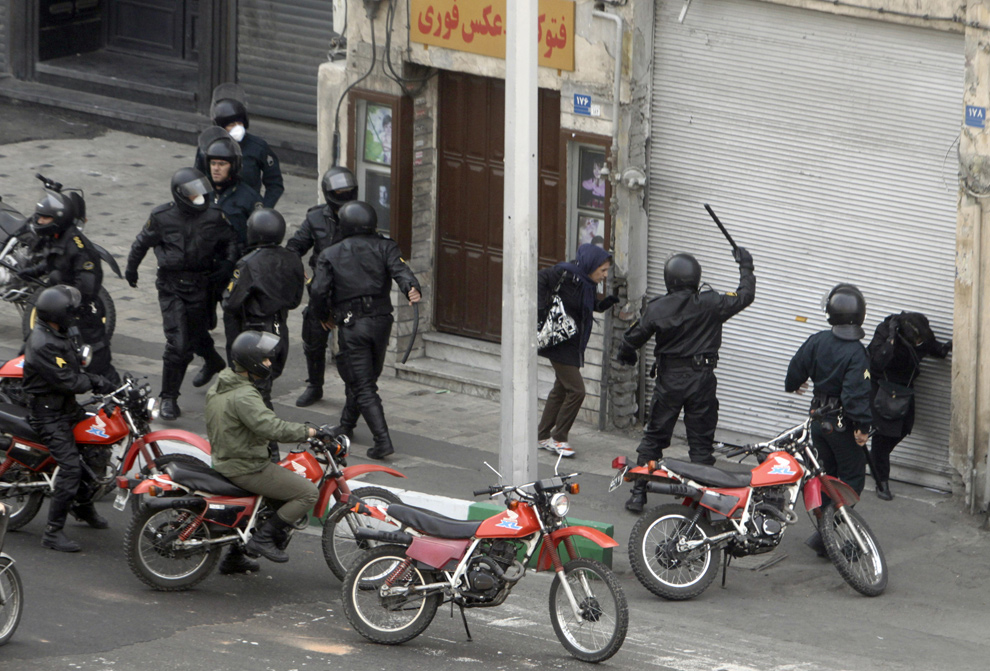 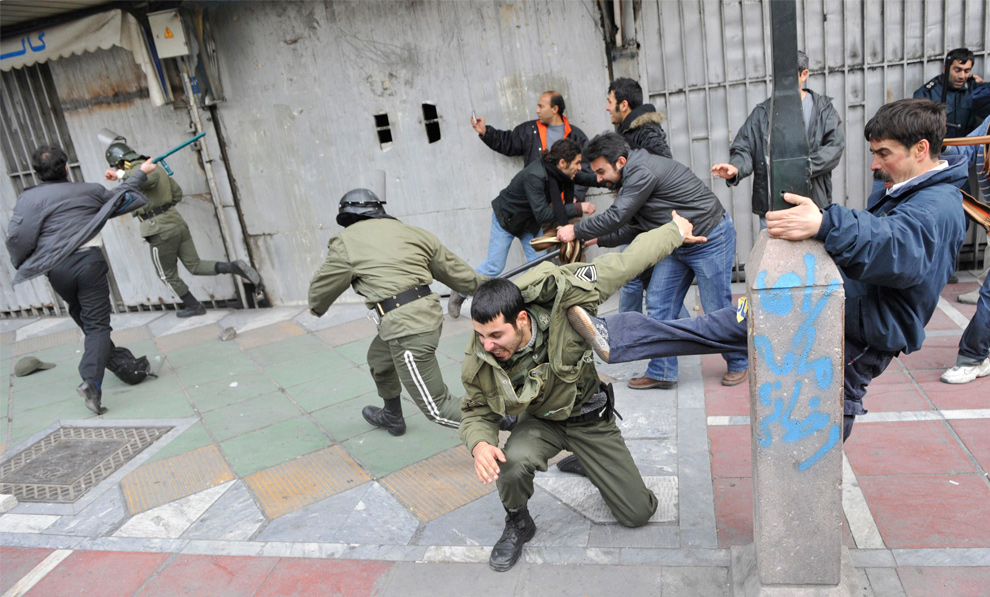 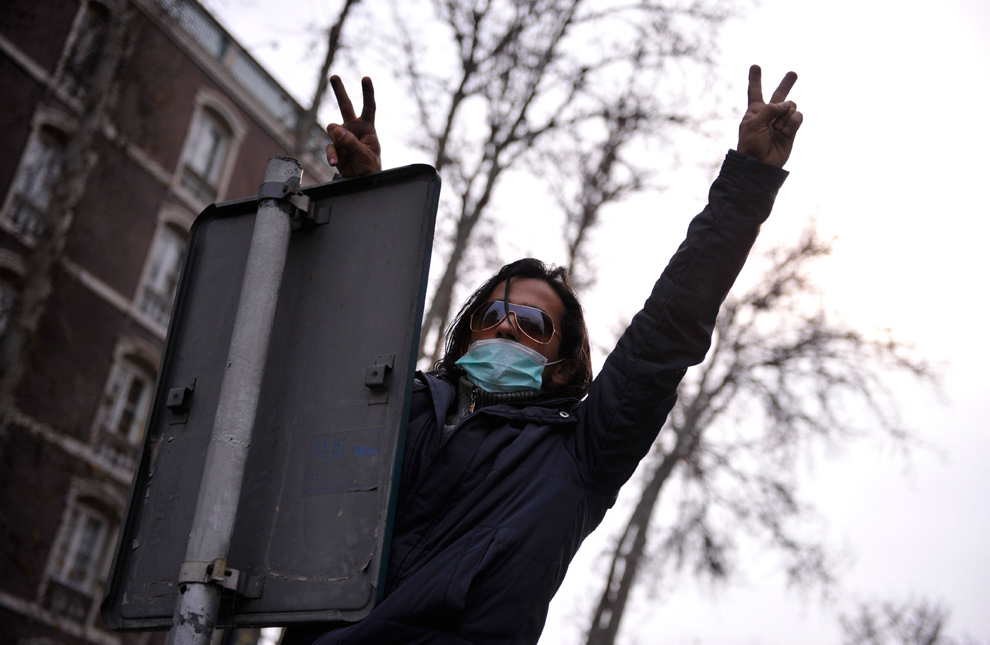 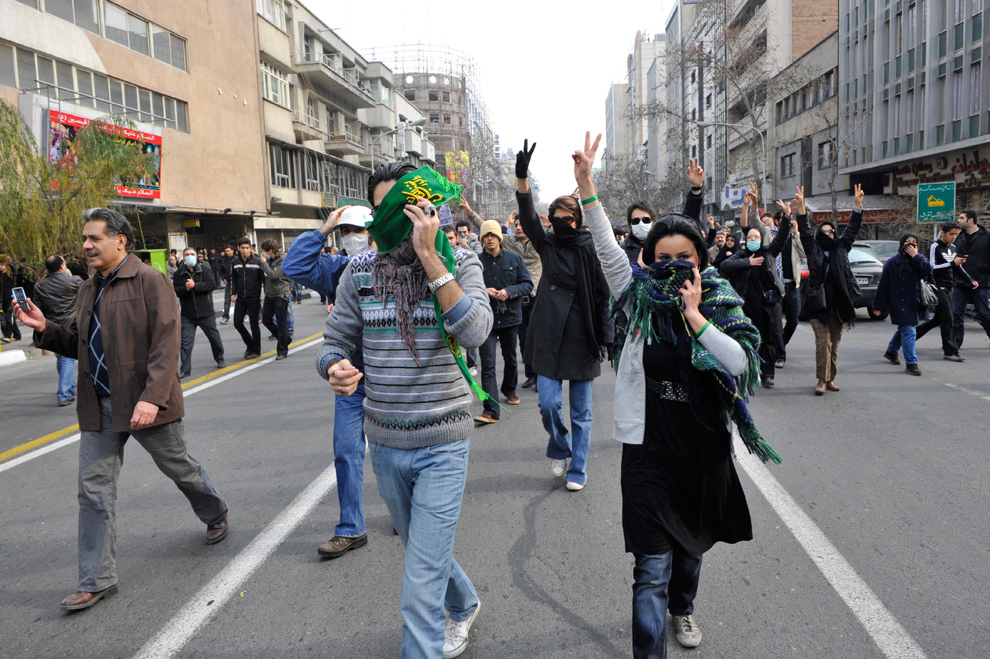 14
Iranian protesters flash the victory sign, as they cover their faces to avoid to be identified by security during anti-government protest in Tehran, Iran, Sunday, Dec. 27, 2009. (AP Photo) # 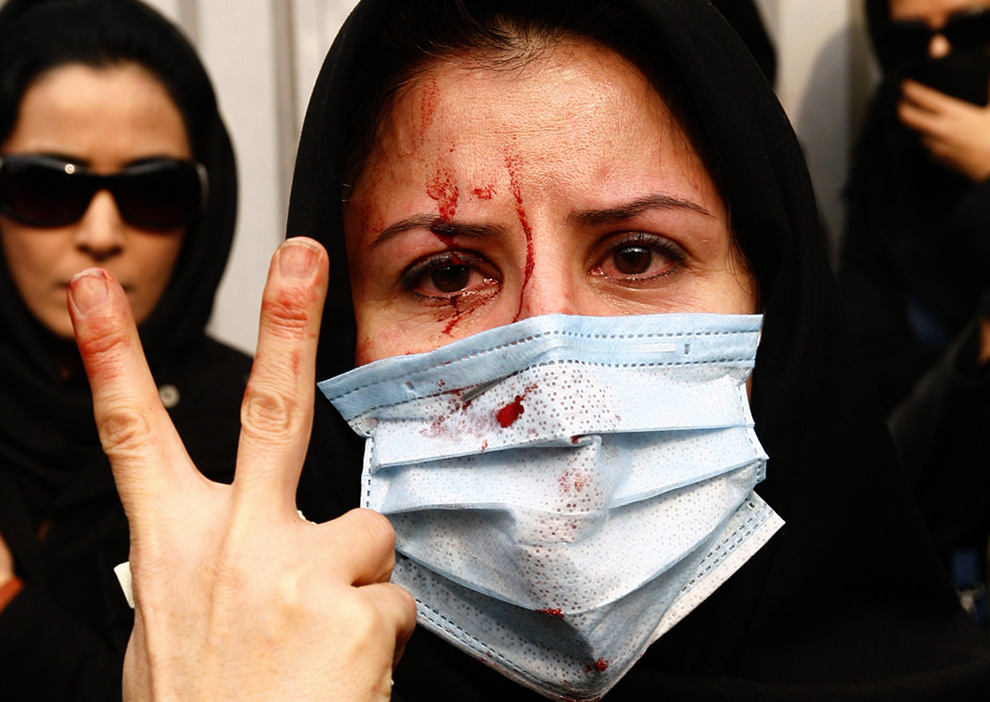 15
An injured Iranian opposition supporter gives a V-sign during clashes with security forces in Tehran on December 27, 2009. (AMIR SADEGHI/AFP/Getty Images) #

16
Police motorcycles burn as an Iranian opposition protester aims a stone at security forces trapped against storefronts by a crowd during clashes in Tehran on December 27, 2009. (AFP/Getty Images) # 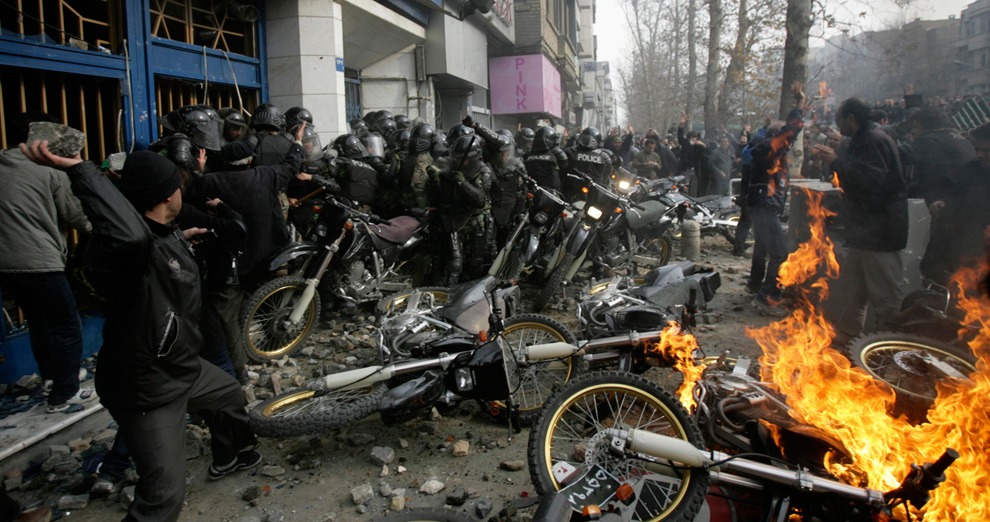 17
A protester throws a stone at riot police as protesters set their motorbikes on fire during fierce clashes in central Tehran, Iran on December 27, 2009. (REUTERS/Stringer) # 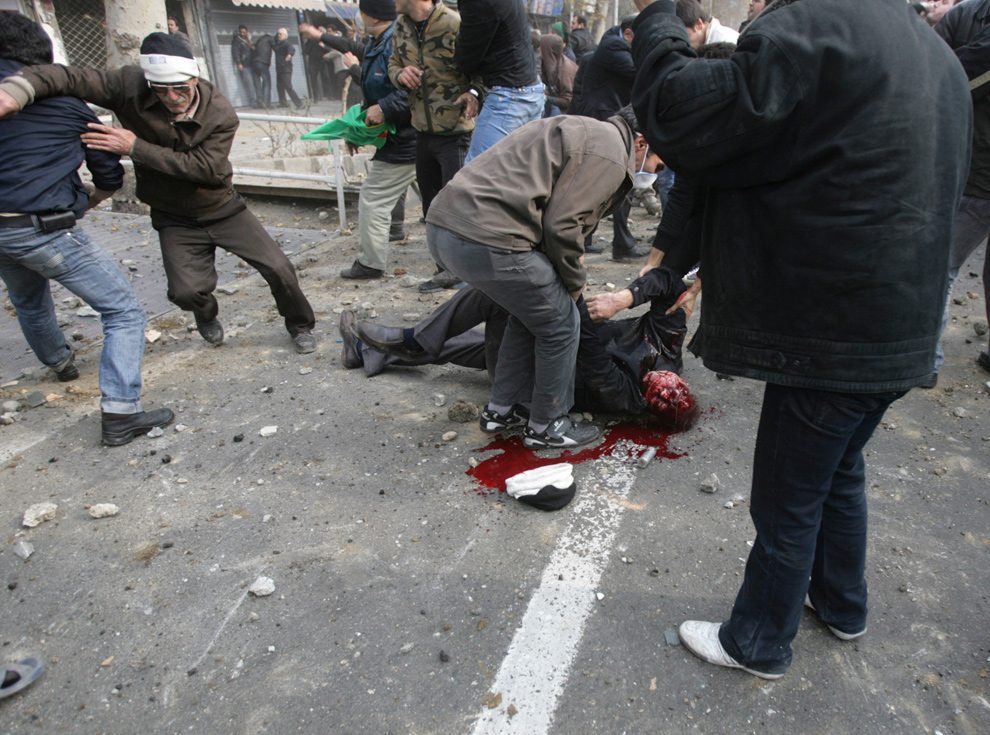 19
Iranian protesters take a policeman away to a safe place after he was beaten by angry protesters during fierce clashes in central Tehran December 27, 2009. (REUTERS/Stringer) # 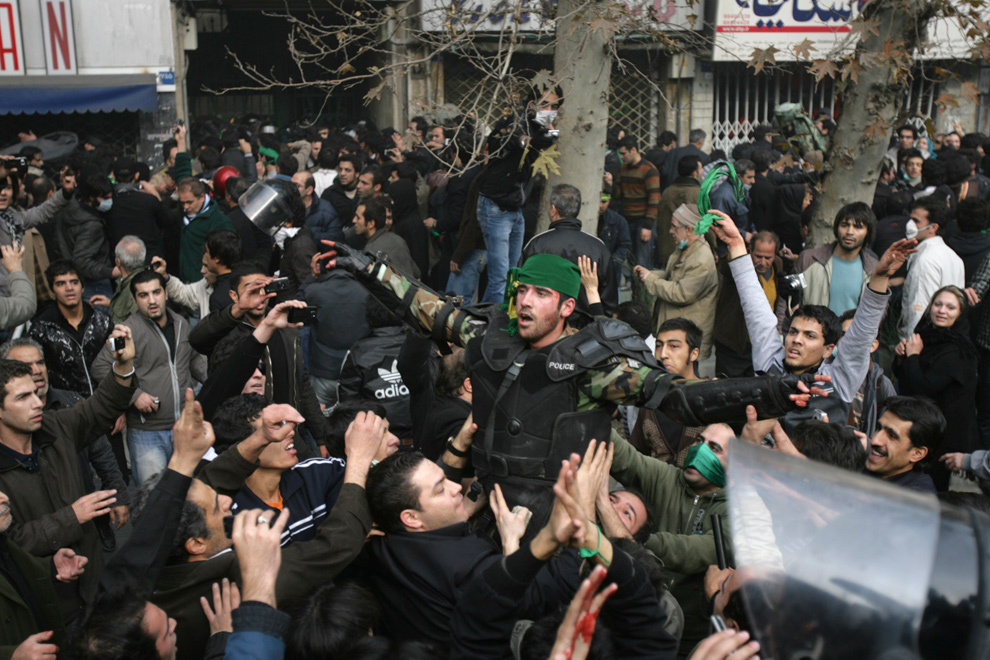 21
An Iranian riot police officer, center, is held aloft by protesters as they put a green scarf, a symbolic color of the opposition, on his head after their clash during anti-government protest at the Enqelab (Revolution) St. in Tehran, Iran, Sunday, Dec. 27, 2009. (AP Photo) # 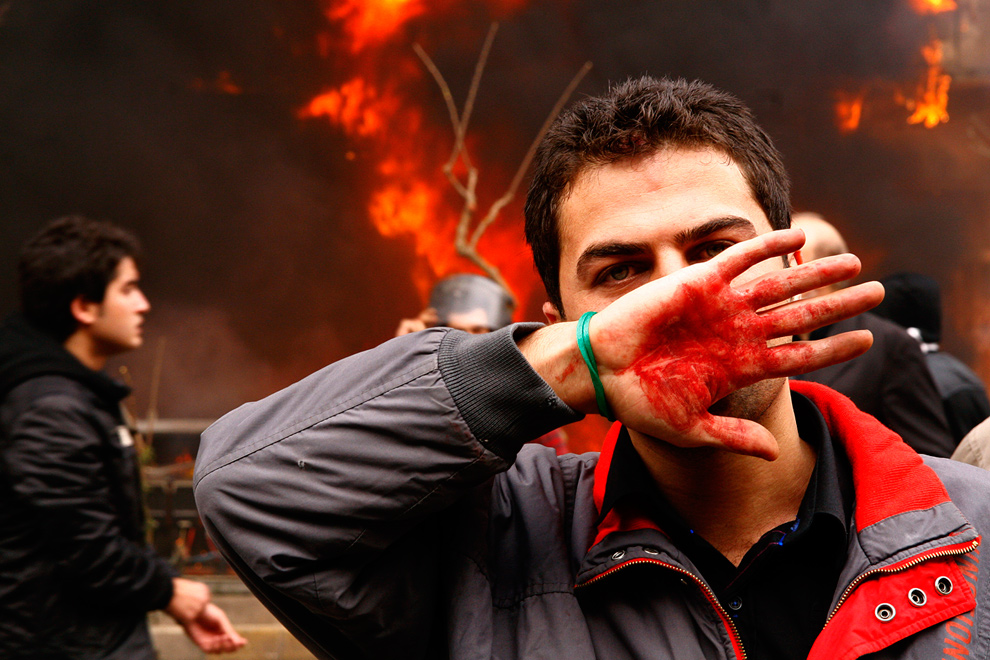 22
An opposition supporter covers his face with his bloodstained hand during clashes with security forces in Tehran on December 27, 2009. (AMIR SADEGHI/AFP/Getty Images) # 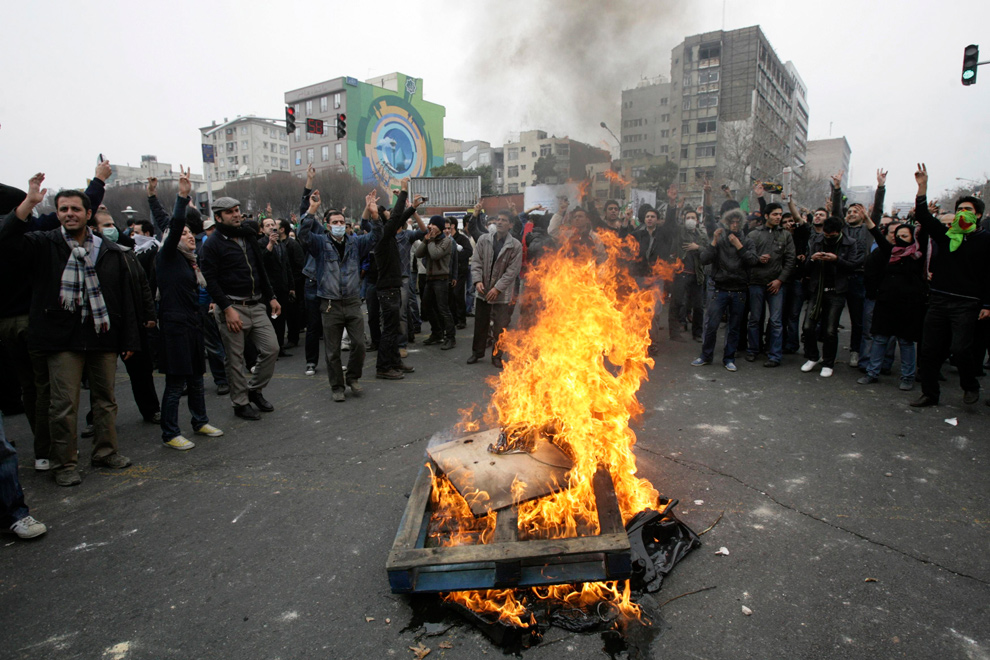 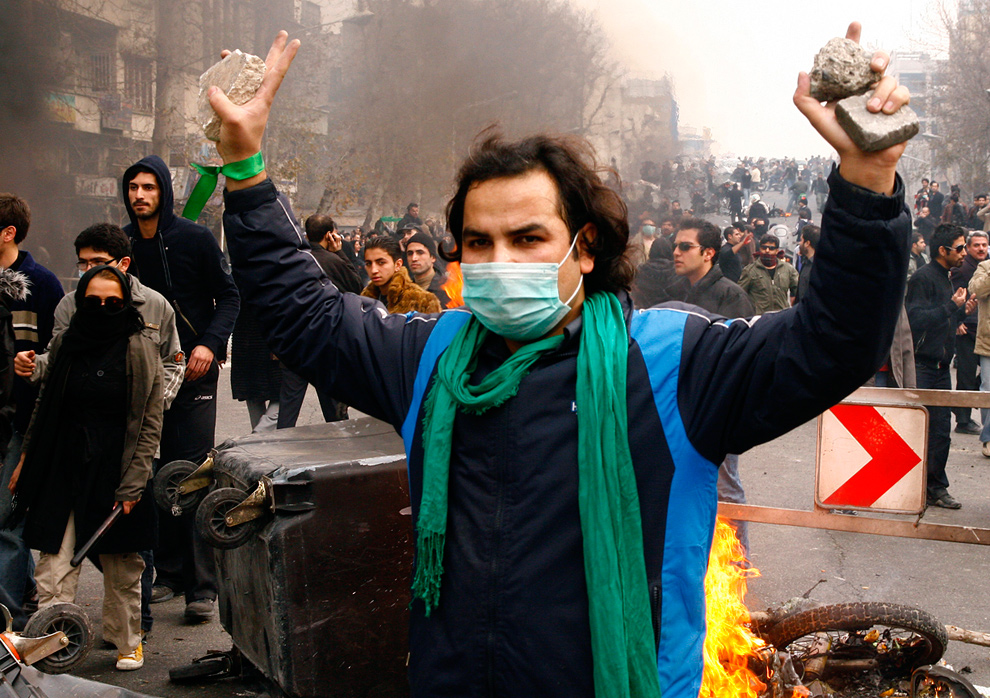 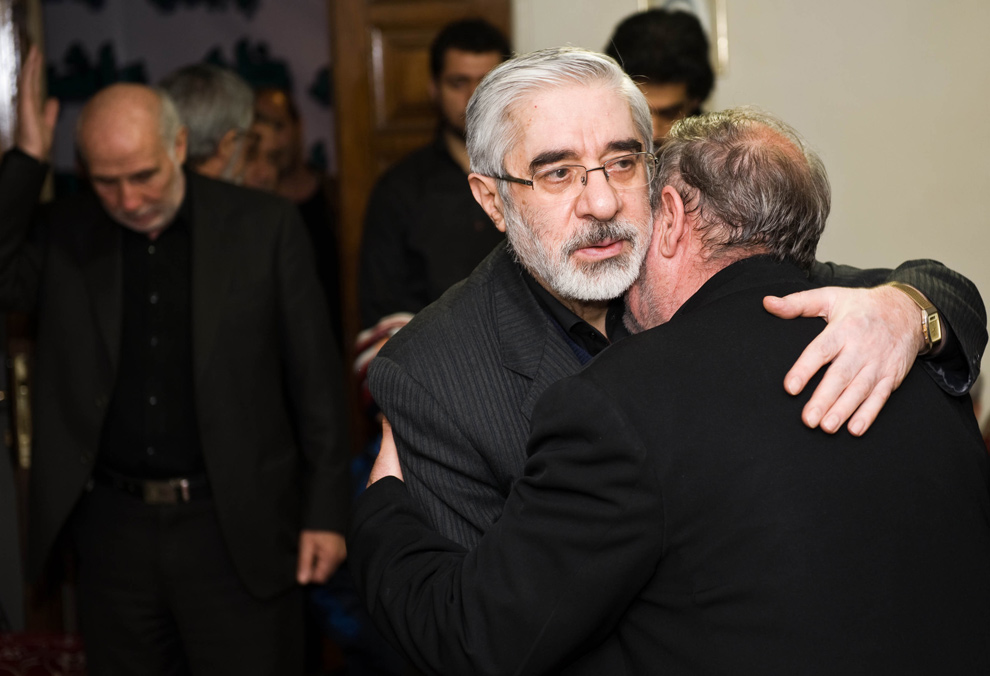 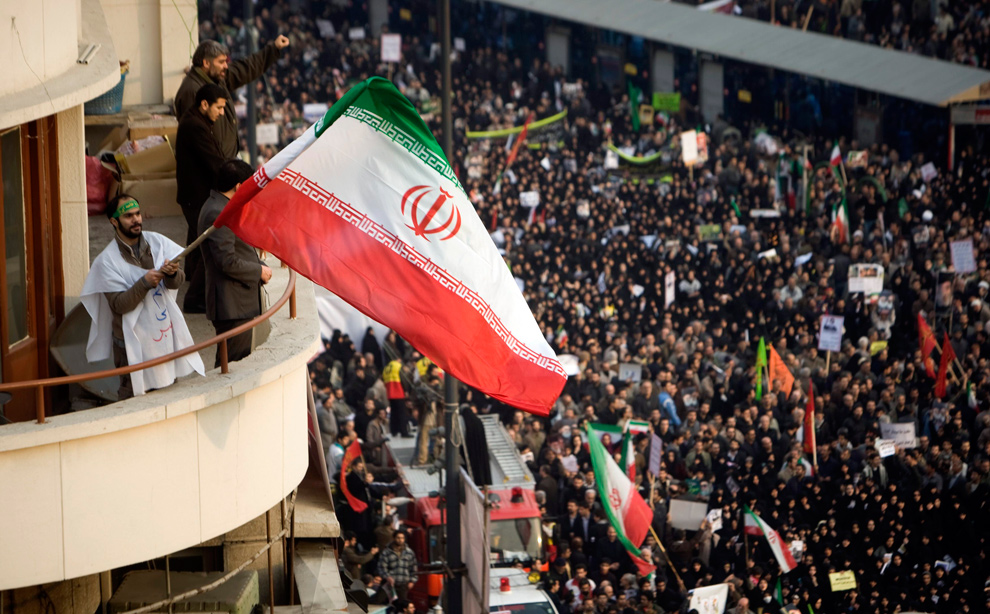 26
A supporter of the Iranian government waves the flag of Iran as he takes part in a protest against the opposition demonstration during holy day of Ashoura in Tehran December, 30 2009. The demonstration in Tehran's Enghelab square was one of several massive rallies in major Iranian cities, called for by clerics, seminary schools and the armed forces in response to a string of opposition protests against President Mahmoud Ahmadinejad's disputed June re-election. (REUTERS/Morteza Nikoubazl) # 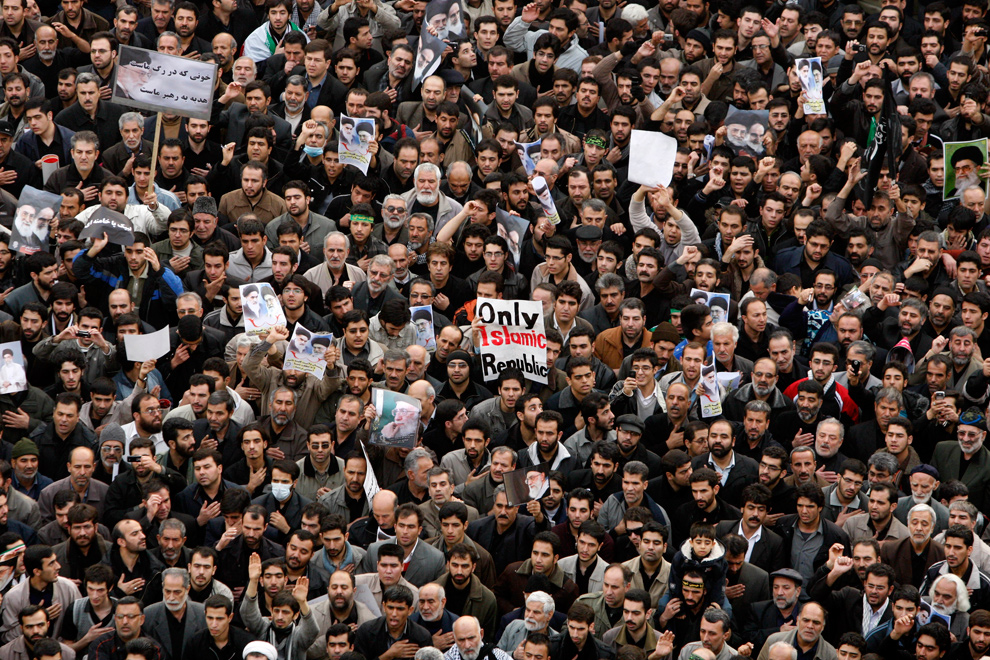 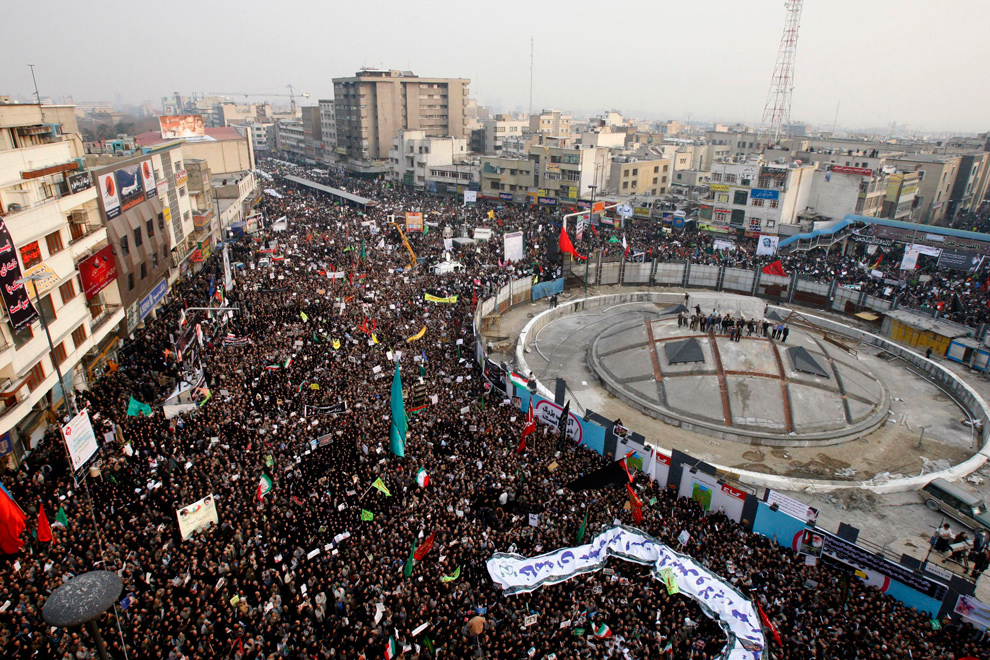 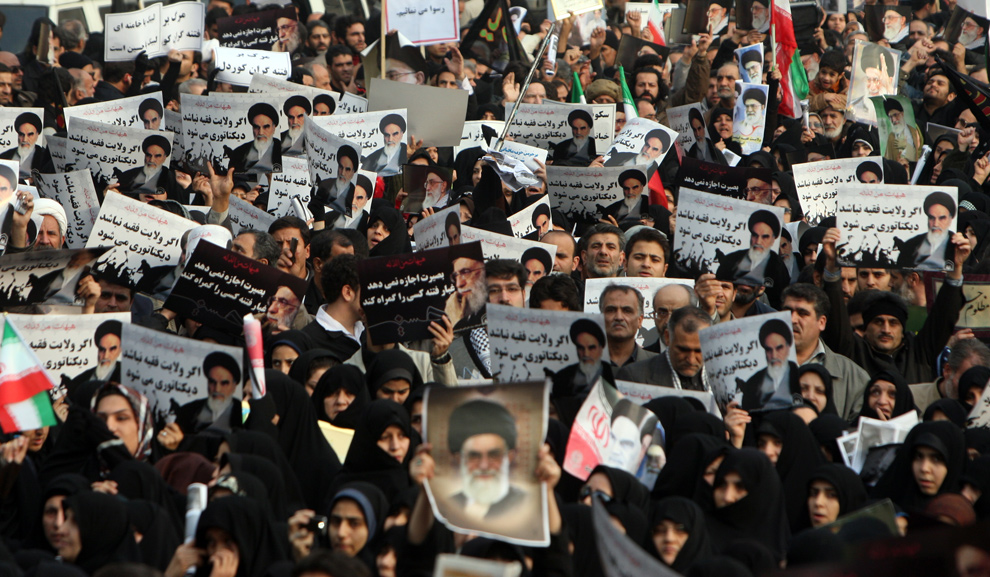 29
A large crowd of supporters of Iran's regime take to the streets in Tehran on December 30, 2009, in a show of force against the opposition which it accuses of being "pawns of the enemies." (ATTA KENARE/AFP/Getty Images) # 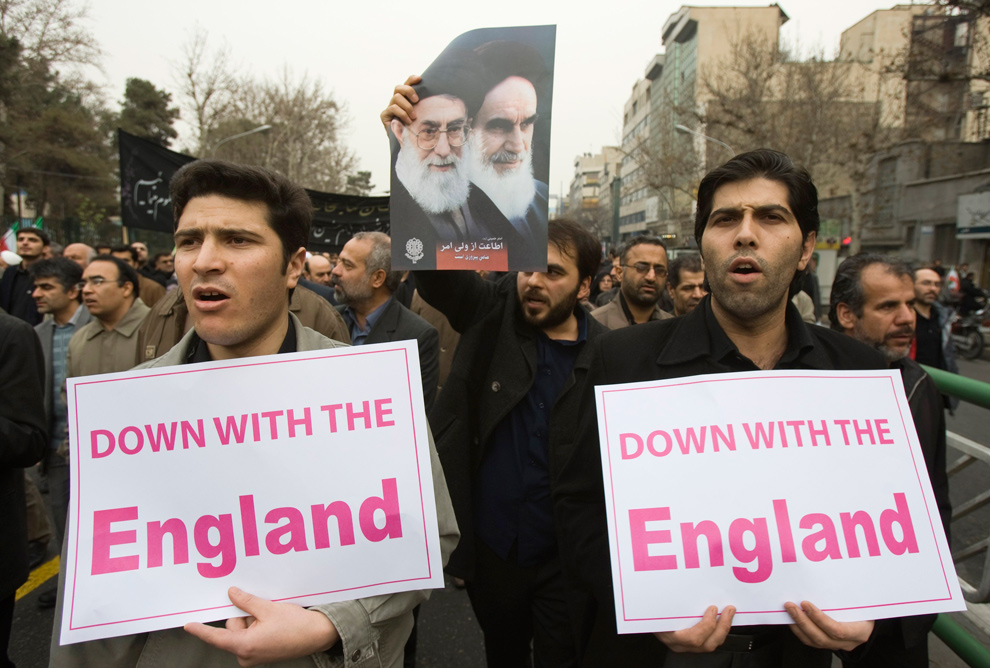 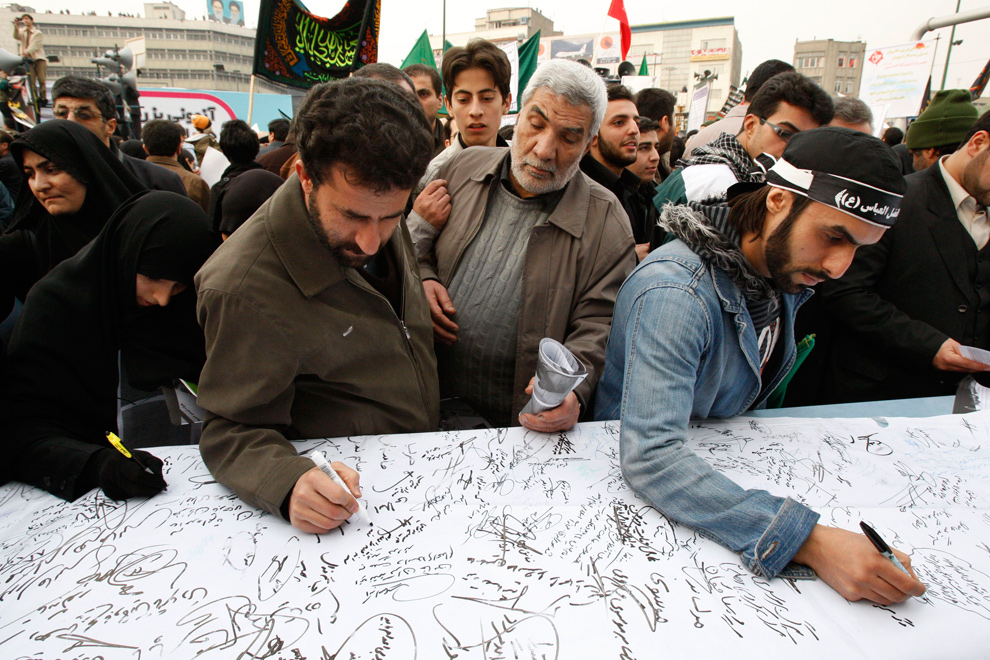 31
Iranian demonstrators sign a scroll to deliver to the judiciary chief, condemning the opposition leaders, in a pro-government rally at the Enqelab (Revolution) Sq. in Tehran, Iran, Wednesday, Dec. 30, 2009. (AP Photo/Vahid Salemi) # 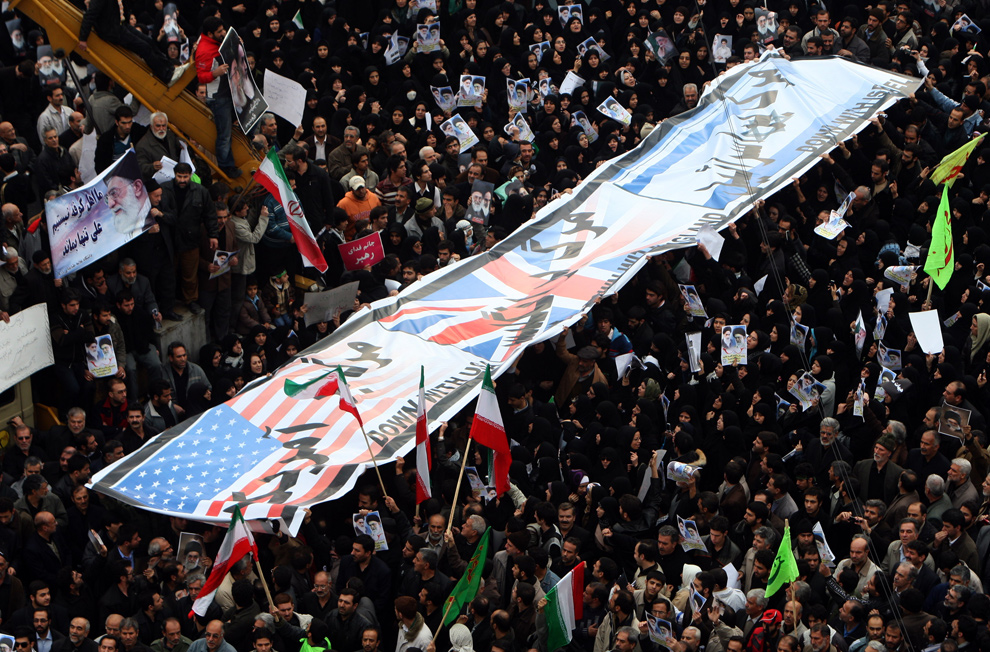 32
Supporters of Iran's regime carry a banner of the US, UK and Israeli flags as they take to the streets in Tehran on December 30, 2009. (ATTA KENARE/AFP/Getty Images) # 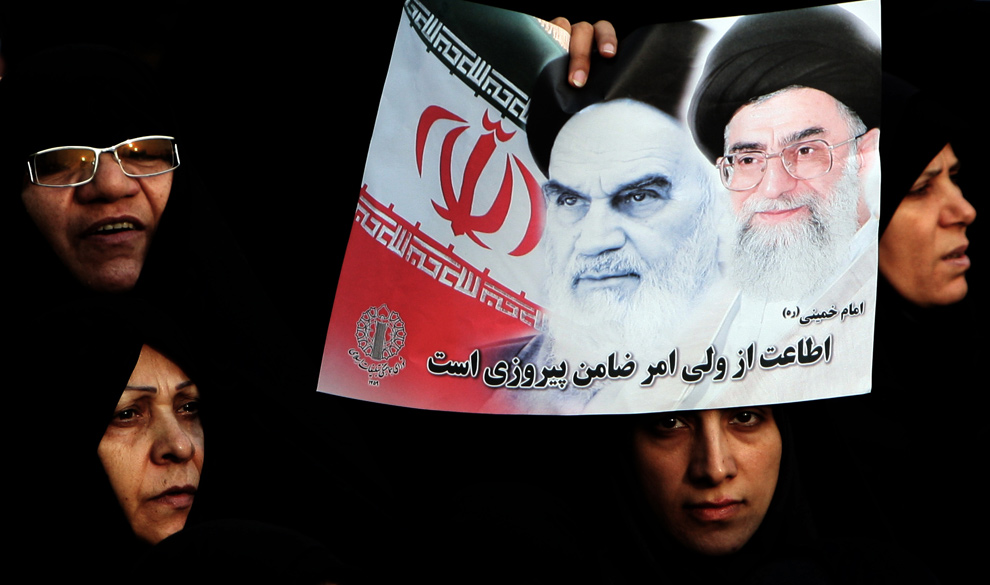 33
Female supporters of Iran's regime hold up a portrait of Iranian Supreme Leader Ali Khamenei (right) and founder of the Islamic Republic Ayatollah Ruhollah Khomenei, as they take to the streets in Tehran on December 30, 2009. (ATTA KENARE/AFP/Getty Images) #