Last month, during two weeks in May, 2008, a series of attacks took place all over South Africa. In a clash between the poorest of the poor, gangs of local black South Africans descended on informal settlements and shanty towns, armed with clubs, machetes and torches, and attacked immigrants from Mozambique, Malawi and Zimbabawe. Locals accused these immigrants of taking jobs away from them, among other grievances. Over the course of those two weeks, over 60 foreigners were killed, several hundred injured, and many thousands of immigrants are now displaced, or are returning to their home countries. Dealing with the aftermath of the attacks has become a large problem for South Africa - prosecuting attackers, accommodating refugees, dealing with a labor shortage, political damage control, seeking to address root causes, and some soul-searching are all taking place. (15 photos total) 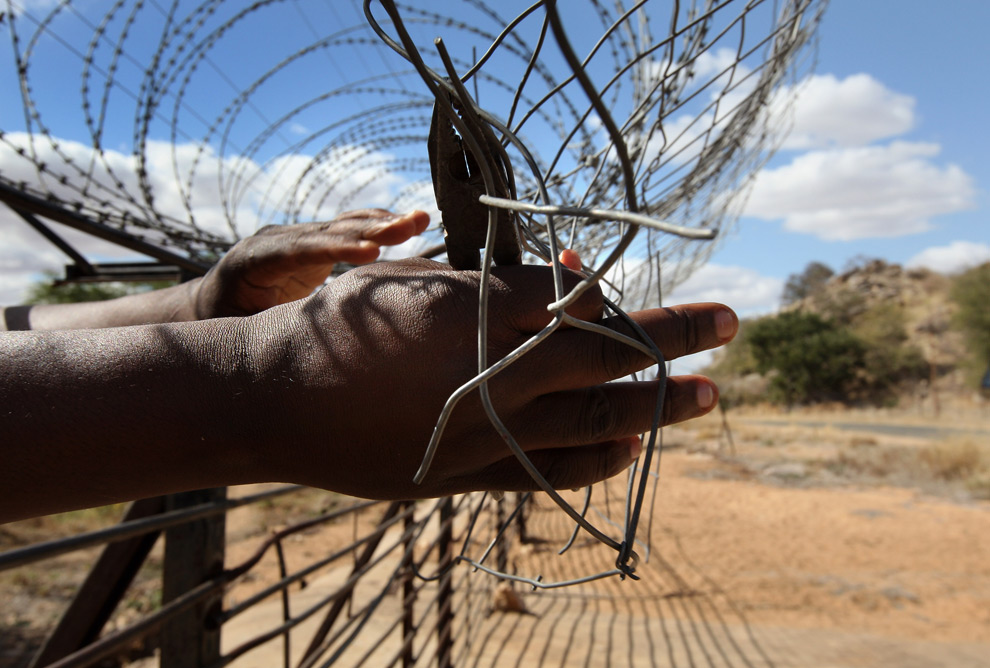 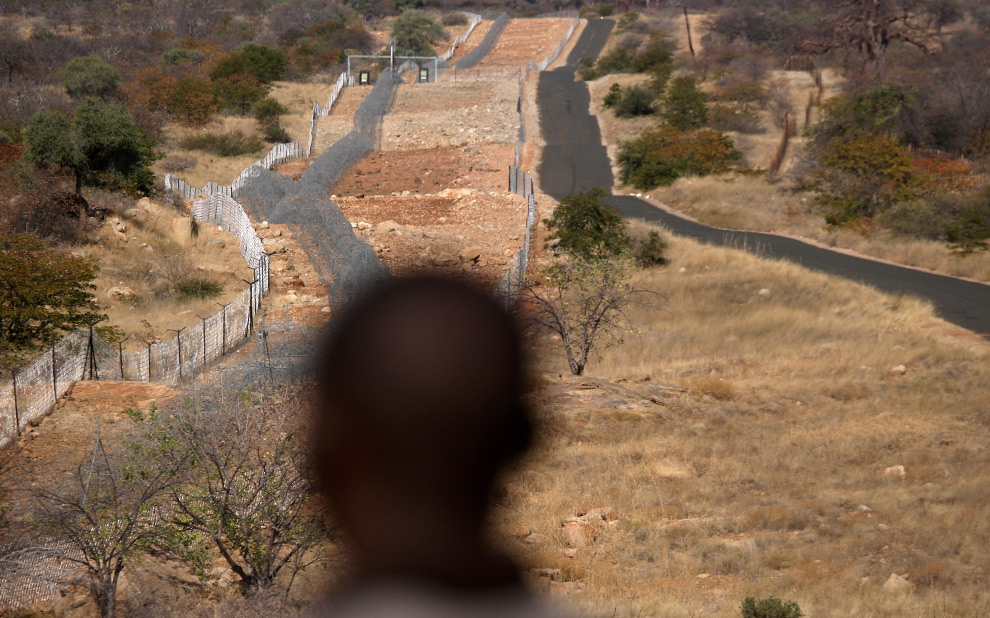 A Zimbabwaen refugee looks over the border fence from the South African side May 27, 2008 near Musina, South Africa. (Photo by John Moore/Getty Images) 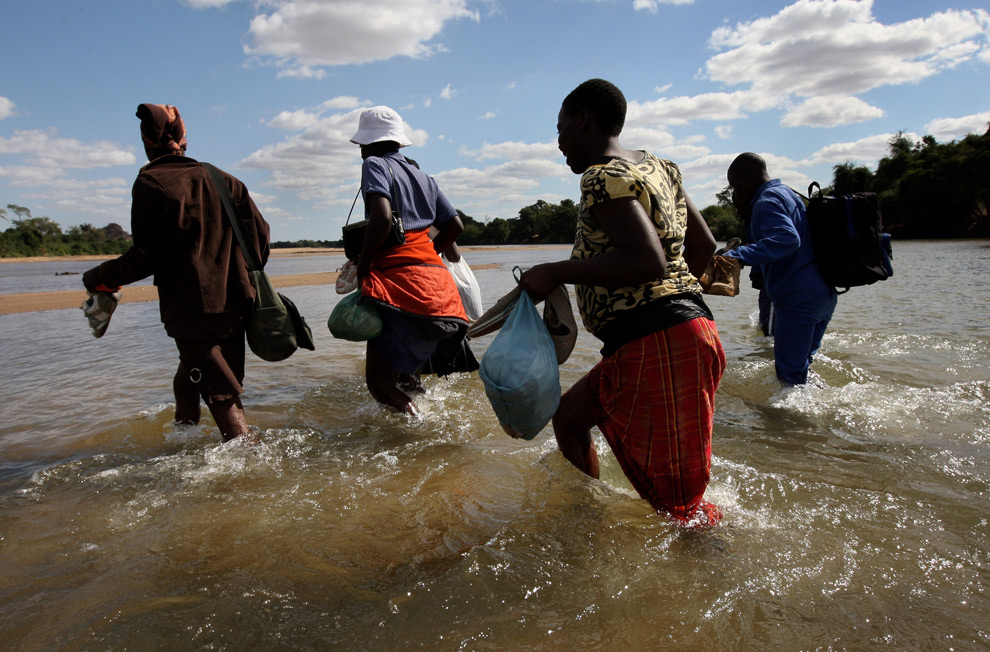 Zimbabwaen immigrants cross the border from Zimbabwe into South Africa May 27, 2008 over the Limpopo River near Musina. (Photo by John Moore/Getty Images)

A general view of a Reiger Park informal settlement outside Johannesburg, South Africa, Friday May 23, 2008. Thousands forced from their homes by anti-foreigner violence in South Africa are now threatened by disease in makeshift camps, aid workers said Friday, and some immigrants said they felt safer hiding in open fields. (AP Photo/Themba Hadebe) 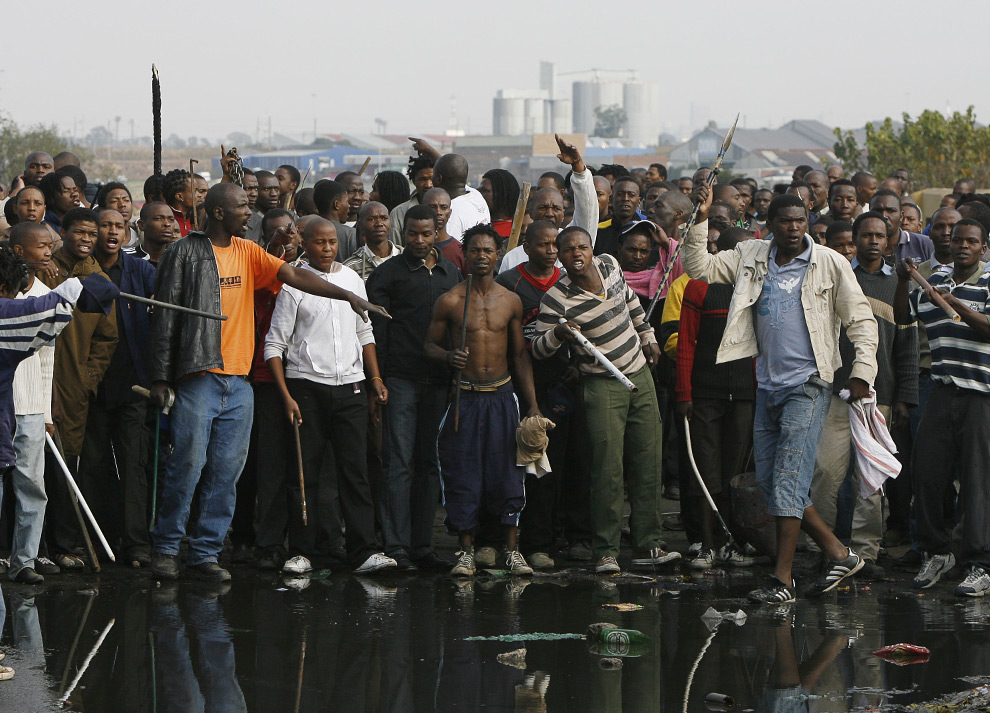 A crowd, armed with clubs, machetes and axes goes on a rampage on May 20, 2008 during violent xenophobic clashes at Reiger park informal settlement on the outskirt of Johannesburg. (GIANLUIGI GUERCIA/AFP/Getty Images) 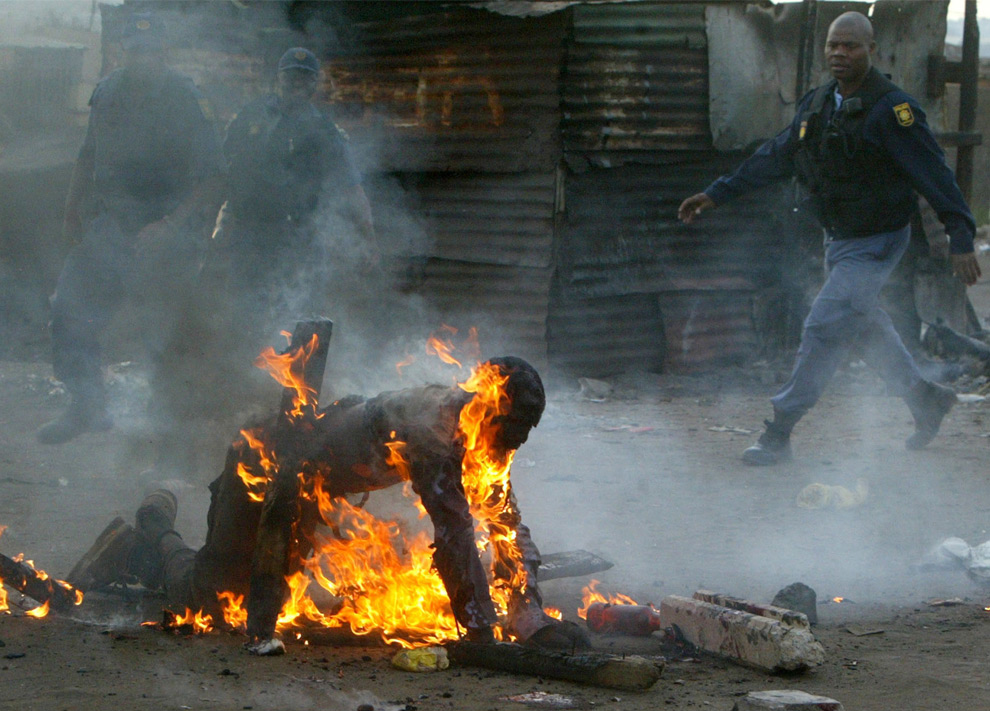 South African policemen attend to Mozambican immigrant Ernesto Alfabeto Nhamuave who was set on fire in Reiger Park during xenophobic clashes that shook the whole of Johannesburg on May 18, 2008. Nhamuave, a 35-year-old father of three, later died of his injuries, his body returned to Mozambique to be buried. (STRINGER/AFP/Getty Images) 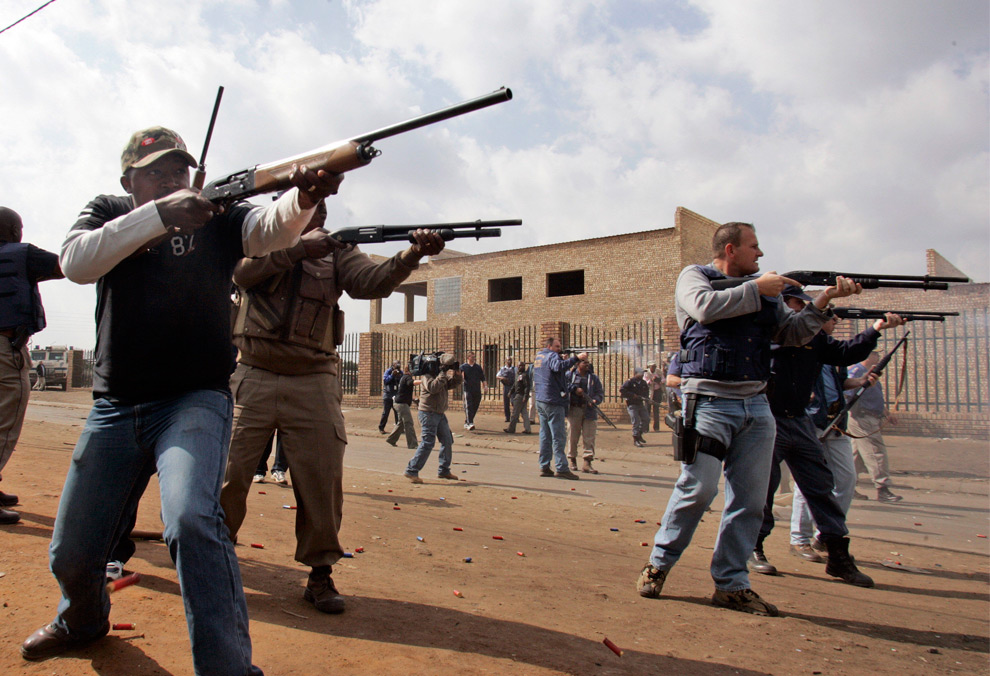 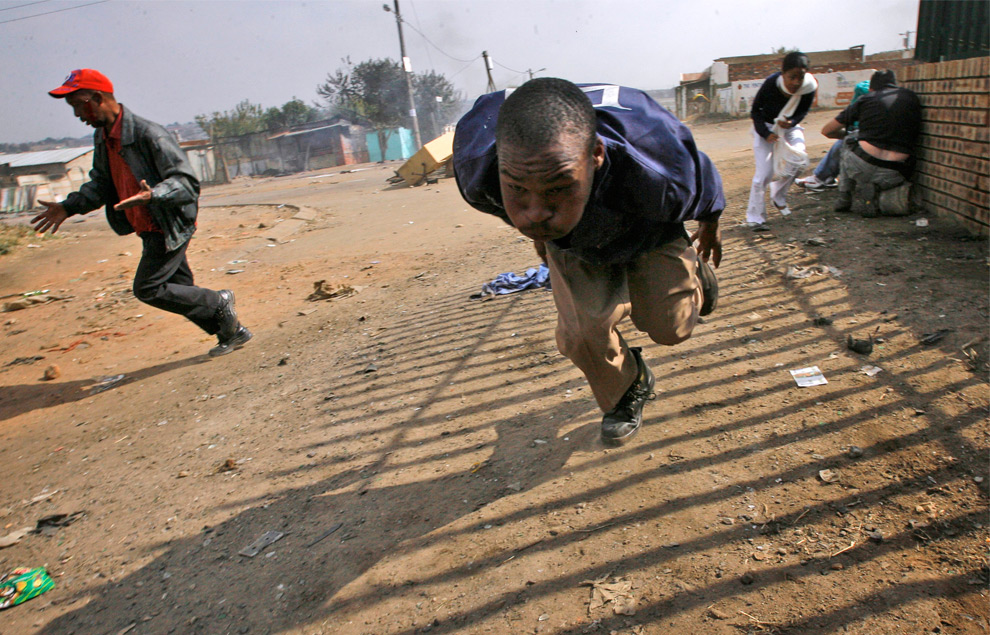 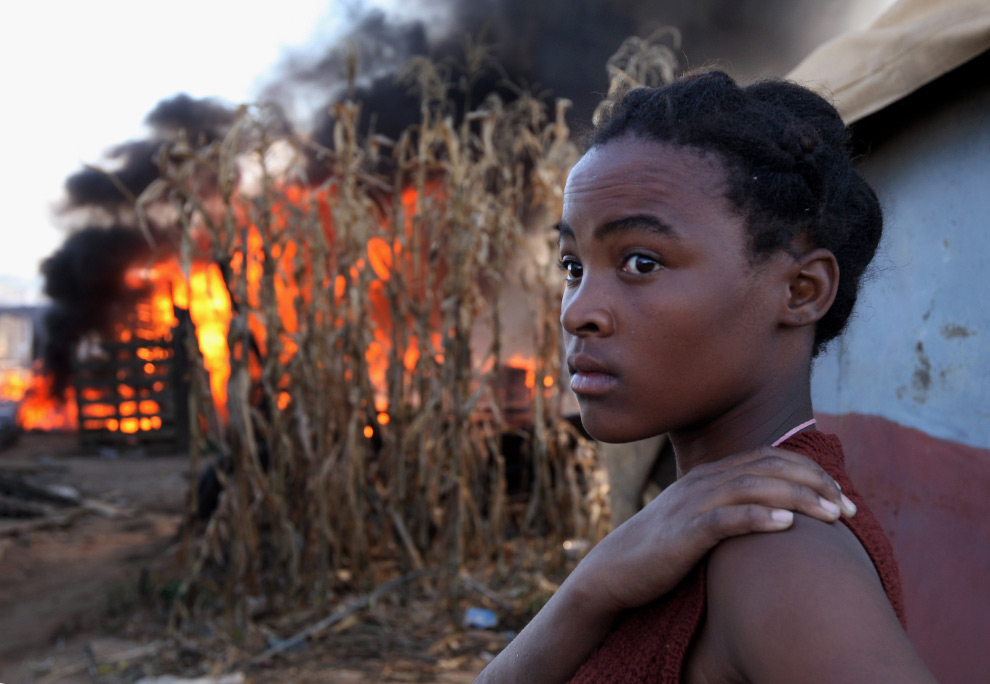 A Reiger Park neighbor stands near burning homes May 22, 2008 in the shantytown of Reiger Park, South Africa. (Photo by John Moore/Getty Images) 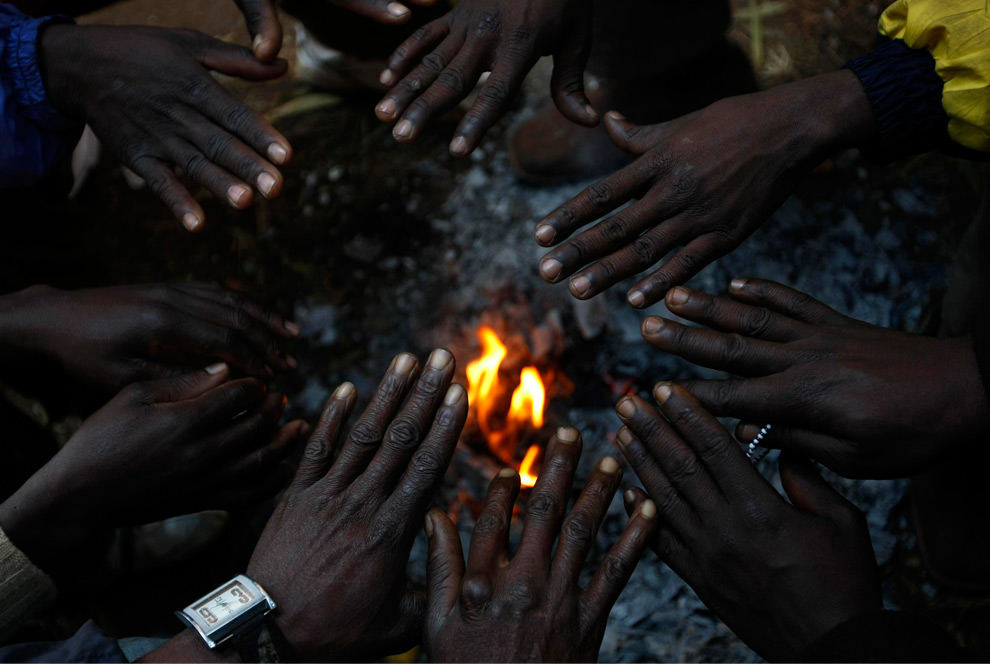 African immigrants, displaced by anti-foreigner violence in Johannesburg, warm their hands around a small fire outside the Jeppe police station in the city, May 27, 2008. (REUTERS/Mike Hutchings) 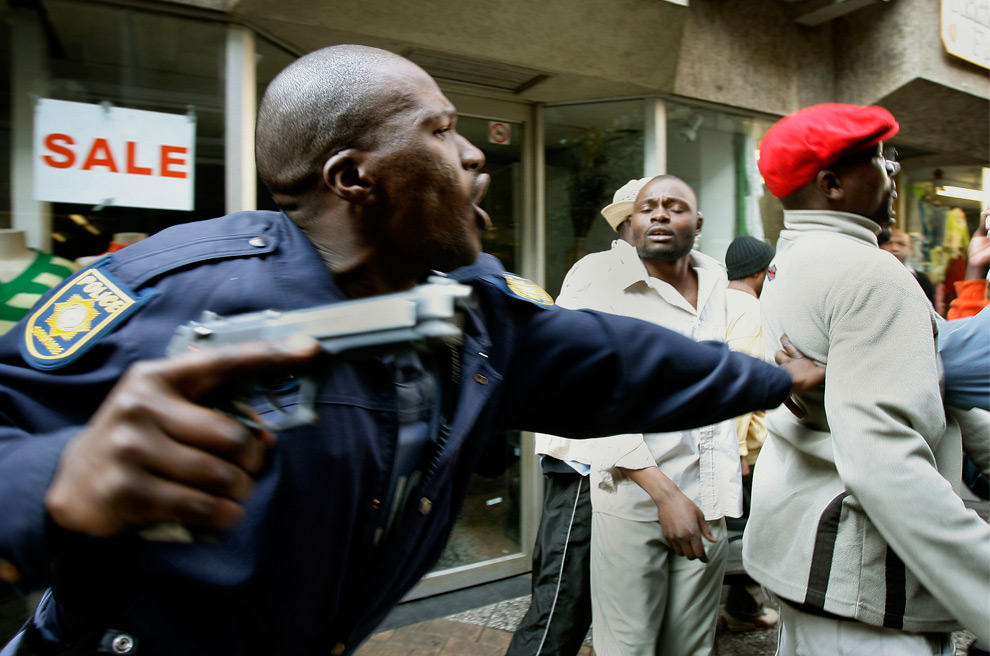 A South African police officer tells foreign refugees to return to the Central Methodist Church where hundreds of immigrants are staying, after South Africans attempted to attack them in Johannesburg, South Africa, Saturday May 24, 2008. Thousands of protesters marched in downtown Johannesburg to protest the recent wave of attacks against foreigners that left over 40 dead and scores homeless.(AP Photo/Jerome Delay) 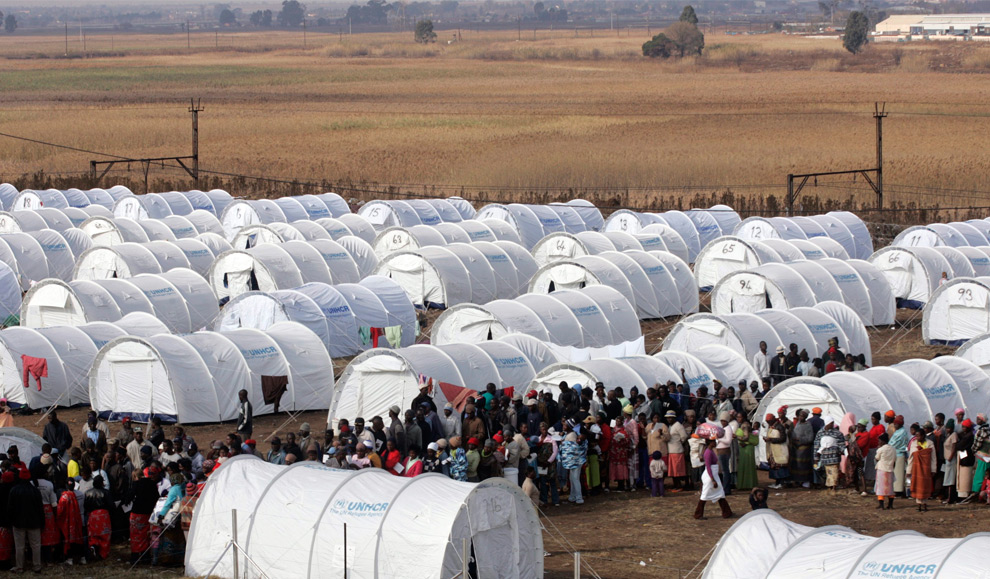 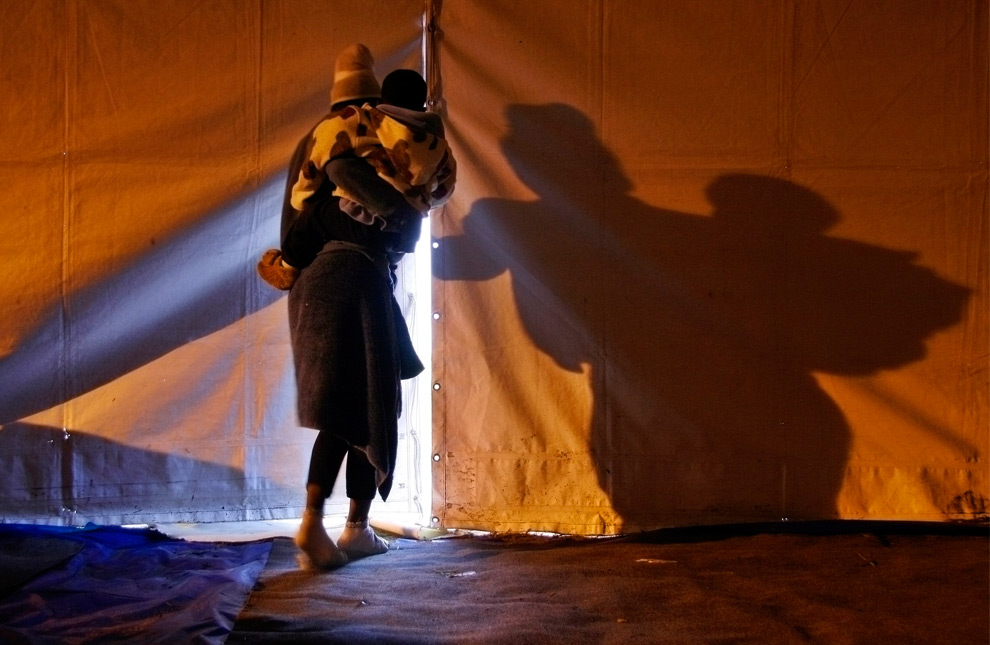 A mother and child, displaced by anti-foreigner violence in Cape Town, leave the shelter of a tent at a makeshift camp close to the city, May 29, 2008. (REUTERS/Mark Wessels) 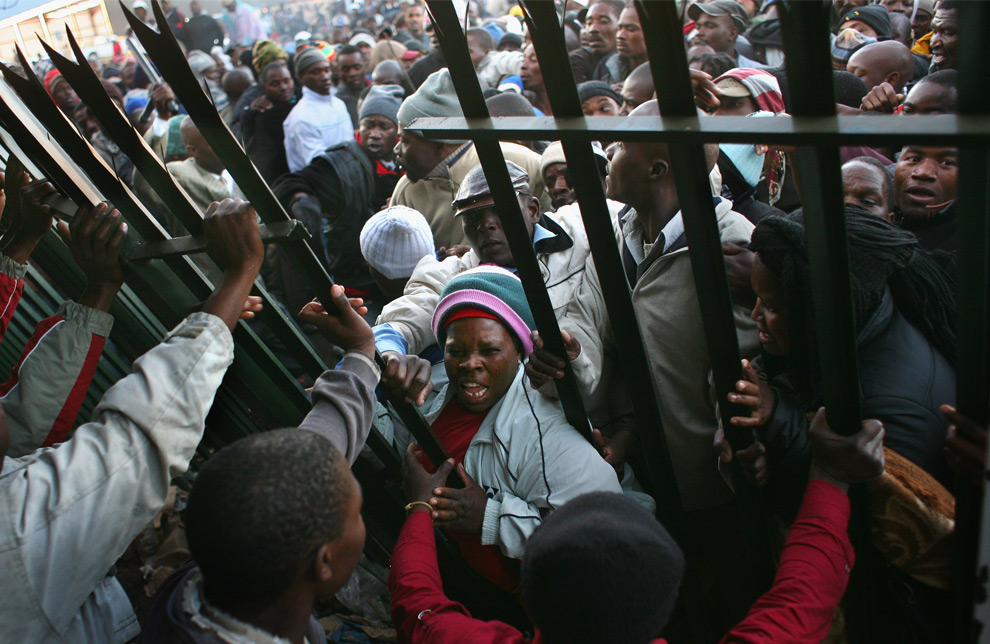 Immigrants, most from Zimbabwe, rush the gate to apply for refugee asylum permits at a government refugee center June 17, 2008 in Johannesburg, South Africa. Officials were overwhelmed by the crowd of thousands that appeared Tuesday morning, after a three day weekend in South Africa. The wave of immigrants crossing illegally from Zimbabwe continues, despite the xenophobic violence against immigrants last month. (Photo by John Moore/Getty Images) 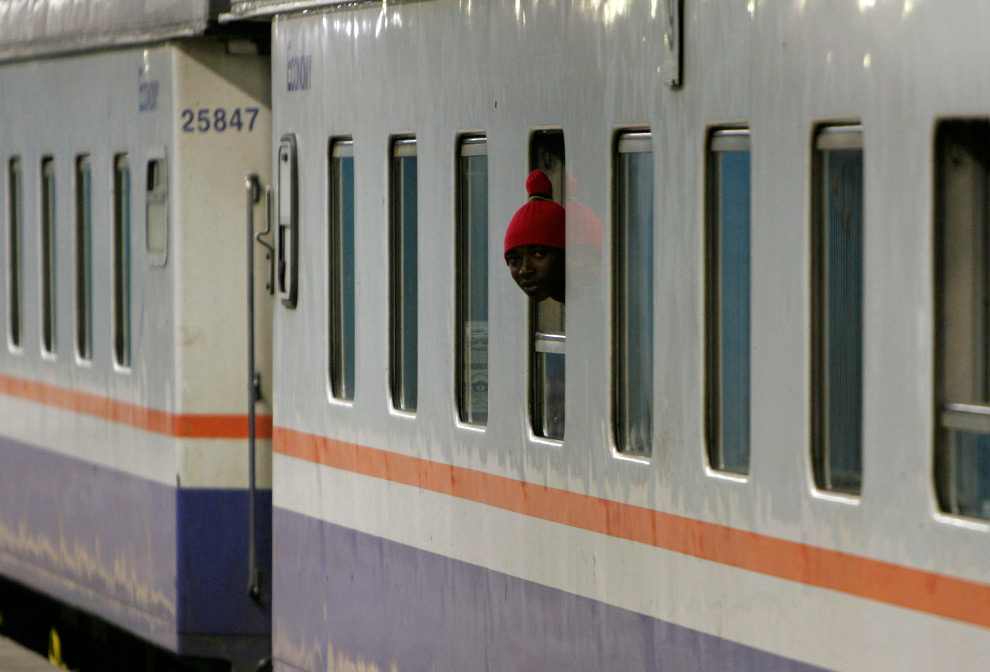 A man peers through the window as a train carrying displaced immigrants leaves from Johannesburg to neighboring Mozambique Tuesday, May 27, 2008. While the violence was dying down, thousands of displaced people remained in camps and foreigners were streaming back home. (AP Photo/Denis Farrell)