Cheadle makes ‘House of Lies’ worth believing in 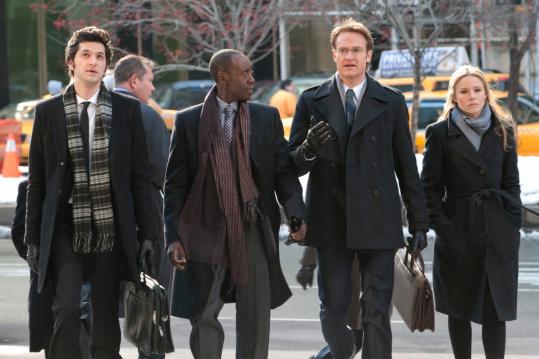 Marty Kaan should feel right at home on Showtime.

As played by the ever-agile Don Cheadle, the hot-blooded spin doctor at the cold heart of the new dark comedy “House of Lies,’’ Kaan handily takes a place in pay cable’s expanding pantheon of emotionally scarred souls adhering to their own warped codes of honor including, but not limited to, Dexter Morgan (“Dexter’’), Hank Moody (“Californication’’), Frank Gallagher (“Shameless’’), and Jackie Peyton (“Nurse Jackie’’).

Kaan is a top tier, LA-based management consultant/B.S. artist pulling in seven figures. He and the members of his four-person team - including Kristen Bell (“Veronica Mars’’) and Ben Schwartz (“Parks and Recreation’’) - travel from town to town with brisk, Clooney-in-“Up in the Air’’-efficiency doing damage control for the 1% even as they exercise precious little of the same in what personal lives their demanding hours allow them.

As Bell’s Jeannie van der Hooven explains early on in the pilot, airing tomorrow night at 10, Kaan presents as an attractive, highly educated man “and then you open your mouth and the damage spills right out.’’

He may solve multi-billion dollar problems for big businesses with savvy tactics, but Kaan has big problems of his own that he is ill-equipped to handle with his indecipherable business jargon and computer models.

His mother committed suicide. He seethes with resentment at the unsolicited advice doled out by his retired psychotherapist dad Jeremiah (Glynn Turman). Yet at the same time he is grateful for the live-in care Jeremiah provides for his son Roscoe (Donis Leonard, Jr.), who in turn confuses Marty with his fluid sense of gender identification. (Roscoe likes to cross-dress and is trying out for the role of Sandy in the middle-school production of “Grease,’’ but also enjoys violent shoot-’em-up video games and admits to liking a girl as well as a boy.)

And then there is the small matter of Marty’s ex-wife and chief business rival Monica (Dawn Olivieri). The pair are engaged in a toxic waltz that includes business treachery and combative sexual escapades that neither seems to actually want but are somehow unable to prevent.

Based on the book “House of Lies: How Management Consultants Steal Your Watch and Then Tell You the Time’’ by Martin Kihn, creator-writer-producer Matthew Carnahan (“Dirt’’) seems to be aiming at showing the effects of moral bankruptcy and human disconnect on scales both epic and intimate.

(And there is plenty of intimacy - we first meet Marty and Monica in the buff - not to mention the language that goes along with pay cable freedoms.)

This “House’’ is mostly built on Cheadle’s shoulders and, in the first few episodes at least, the actor, who has ably toggled between comedy and drama and was nominated for an Academy Award for his work in “Hotel Rwanda,’’ appears sturdy and engaged. He might overplay the smarmier side of Kaan - pronounced “con,’’ as in “the long con’’ - but he also parcels out precise emotional moments as well, in interactions with his son and an emotional dream about his mother.

He also handles the show’s one potentially irritating gimmick with aplomb. Occasionally, the action will freeze and Cheadle will address the camera directly to pontificate about his life or to explain business terms like “boil the ocean’’ (i.e. attempt the impossible) or “afterwork’’ (the extension of job beyond the immediate need, thus resulting in more billable hours).

It helps that Cheadle is surrounded by characters, and actors, who seem like they will go interesting places, including Bell’s smart-but-still-learning Jeannie, and Schwartz, who is as offhandedly funny here as schemer Clyde as he is on “Parks and Recreation’’ as the absurdly delusional Jean-Ralphio.