‘A Gifted Man’ needs to rise above ghost story 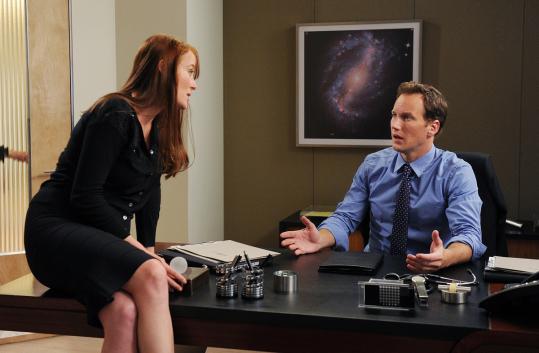 Patrick Wilson stars as a neurosurgeon who gets visits from his deceased ex-wife, played by Jennifer Ehle, in the CBS drama “A Gifted Man.’’ (Heather Wines/CBS)
By Matthew Gilbert Globe Staff / September 23, 2011

Patrick Wilson, so good in “Little Children’’ and HBO’s “Angels in America,’’ is the gifted star. On the looks spectrum between Kevin Costner and Paul Newman, he’s got a strongly sympathetic but flawed leading man vibe. The elegant Jennifer Ehle will forever be one of the best Elizabeth Bennetts, after the 1995 “Pride and Prejudice’’ on PBS. She’s both steely and silky, fragile and fierce. And Margo Martindale, who won an Emmy last Sunday for her rich work on “Justified,’’ is always a great kick. She deserved an Oscar nod as Hilary Swank’s awful mother in “Million Dollar Baby,’’ and she was unforgettable in “The Riches’’ and “Dexter.’’ Add to that lineup the explosive Pablo Schreiber and a well-cast Julie Benz, put them in a pilot directed by Jonathan Demme, and you’re ready to rock the small screen, right?

Maybe. Can you embrace a show based on the enormous potential of the actors? I want to recommend “A Gifted Man’’ on faith, because the cast is so fantastic. But, as with NBC’s “Up All Night,’’ starring Maya Rudolph, Will Arnett, and Christina Applegate, the performers are so much better than the premise. They’re like a bunch of expert scientists trying to make the best of a child’s chemistry kit. With a hokey paranormal spin, and a black-and-white approach to our country’s health care problems, “A Gifted Man’’ gives its actors little to work with.

The show, which premieres tonight at 8 on Channel 4, is about how Wilson’s arrogant but brilliant neurosurgeon, Dr. Michael Holt, begins to have a relationship with his ex-wife, Ehle’s Anna - or rather, with Anna’s ghost. A concierge-style doctor to the rich and famous in New York, he is morally lost, and the noble Anna’s ghost has arrived to point him in the right direction, namely helping poor people at her old free clinic. Michael is thrown by Anna’s appearances, and wonders if he’s having a brain event; but his flaky sister (Benz) and her shaman friend (Schreiber) know that Anna’s is a spiritual blessing.

“A Gifted Man’’ is in the “Ghost Whisperer’’ and “Joan of Arcadia’’ timeslot, which has apparently deemed a mystical TV space of some kind. The show does have a trenchant “House’’-like element, as Holt grumpily solves complex medical puzzles, but then it’s also steeped in the gauzy supernatural material required by its Friday night placement on the CBS lineup. Of course, Anna may not really be a ghost; she could just be a manifestation of Michael’s conscience, an internal guide to a more giving, selfless life. Either way, it still feels like a feeble and obvious setup by the end of the first hour. Michael’s a Scrooge who needs to be led by a ghost to the side of good. We get it.

“ER’’ did a lot of interesting storytelling around national health care issues. But with all its ghost whispering, “A Gifted Man’’ runs a lot closer to the Dead Denny category of medical-drama narratives. “Grey’s Anatomy’’ viewers will flinchingly recall the exhausting and absurd Dead Denny plot, which had Katherine Heigl’s Izzie undergoing hallucinations of - and sex with - her late fiance. “A Gifted Man’’ needs to transcend that limited and overused construct, and set the characters free from endless debate over whether Anna is real or not. Let the actors find drama in more earthly concerns. I think they’re up to it.