Tune in, drop out with ‘Workaholics’ 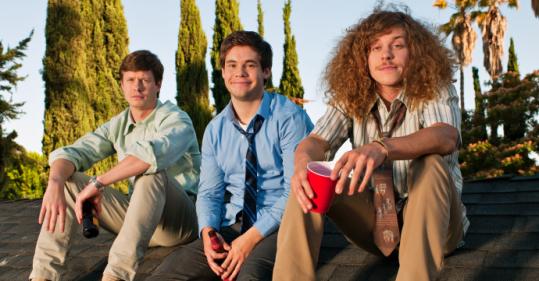 The new Comedy Central sitcom “Workaholics’’ is not for everyone. It’s about three stoner telemarketer roommates fresh out of college who are taking psychedelic mushrooms by the third episode. They’re part Jay and Silent Bob, part Three Stooges, and part the gang from “It’s Always Sunny in Philadelphia.’’

No, the show, which premieres tonight at 10:30, is not for everyone. But those it’s for, it’s for in an original, outrageous way. From Mail Order Comedy, a Web-based sketch group, “Workaholics’’ is a freewheeling portrait of the last gasps of 20-something irresponsibility, when being a slacker man is still fun and not entirely pathetic. The single-camera show is perfect for Comedy Central, as it speaks to viewers who love the kind of scurrilous, boundary-pushing satire of “South Park.’’

The Mail Order guys, Anders Holm, Blake Anderson, and Adam DeVine, play versions of themselves, three fickle friends who don’t want to grow up. By day, they hang at the office, inevitably recovering from the night before and planning for that night’s festivities. In the premiere, they find out, after a night of heavy partying (and, for Anders, a sexting disaster) that they’re about to get drug tested. The rest of the half-hour is a farce, involving niacin pills, Gatorade, and an attempt to get clean urine from kids in a schoolyard. The second episode finds Adam, the loudmouthed one who’s always working a scam, angling for a second chance with a high school crush. Ipecac, a bear suit, and inadvertent peeping ensue.

Bromance is in the air on “Workaholics,’’ I suppose. You are aware that the roots of these three old friends are all twisted up together, as they banter in code and anticipate one another’s actions. Certainly there are glimmers of the Judd Apatow school of dude comedy here and there, although I didn’t find “Workaholics’’ to be a forced effort in that direction. The Mail Order guys have clearly ironed out their own style on the Web, as sympathetic fools who party too hard but still have some semblance of their brains.

The third episode is a little gem about taking hallucinogenic drugs overnight at the telemarketing office and going from one-love euphoria to evil paranoia and back again. It’s like an episode of “The Office’’ turned inside-out, as events unfold like a TV crime drama with a “Mission: Impossible’’ sequence in there for good measure. It’s witty, irreverent, and joyously juvenile.

Definitely not for everyone, but, possibly, for you.