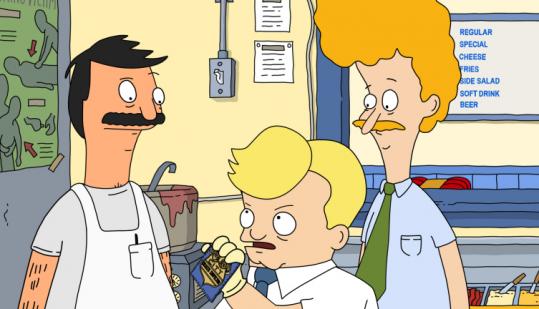 Anyone who has known the particular joys and aggravations of working in a family business will likely get a few chuckles out of “Bob’s Burgers,’’ Fox’s latest attempt to add a keeper to it’s animated Sunday night lineup.

In the hit-and-miss opener, the greasy spoon, set in a seaside East Coast town, is poised for a re-re-re-opening. But instead of focusing on the task at hand, Bob must simultaneously deal with the fury of his wife Linda (John Roberts) for forgetting their anniversary, the “itchy’’ crotch of his grill cook — who happens to be his teenage daughter Tina (Dan Mintz) — the annoying comedy stylings of his son Gene (Eugene Mirman), and a visit from a health inspector who suspects Bob is flipping human meat patties in a deal struck with the It’s Your Funeral mortuary/crematorium next door. The health inspector suspects this because Bob’s precocious youngest daughter Louise (Kristen Schaal, “Flight of the Conchords’’) decided to add a little spice to show and tell. (Understandable, her classmate was bragging about her Spanish matador uncle.)

The best bits end up concerning the potential “Sweeney Bob’’ story line as Bob fights with the health inspector — also Linda’s ex-boyfriend — and confronts the media and an outraged mob. (Pausing the DVR to check out the signs in the mob is worth it. My favorites: “Don’t taste me bro!’’ and “Keep ‘Me’ out of Meat’’). At one point he does such a good job speechifying about the different ways in which people treat the living and the dead it starts to sound like an eloquent, if comically twisted defense of cannibalism.

The cast is uniformly good with Roberts giving great Noo Yawk honk as Linda, and Schaal keeping Louise almost always on the right side of shrill. Benjamin, also a Massachusetts native, and so terrific as Ben on “Dr. Katz,’’ in particular brings his deadpan best to the long-suffering patriarch who bemoans his kin as employees (“I’d fire all of you if I could’’), but clearly loves them.

“Bob’s Burgers’’ has a more sharply offbeat sensibility than its more pop-culture rooted Sunday night neighbors, veering between absurd, endearing, and crude — which fits with the avant stand-up stylings of folks like Schaal and Mirman. Some folks may feel the edges are a bit too sharp, including jokes about autism, child molesters, and, of course, the aforementioned potential cannibalism. The general gross-out factor — often a staple of adult-aimed animation — looks like it will be moderate. (Some may balk at the itchy crotch, but it was a gooey salival kissing bit that did me in.)

And even though the potential for irritation feels high — everyone but Gene is a smidge too sad-sacky and whiny — there’s something about “Bob’s’’ that feels fresh, sweet even. As the dysfunctional family that works together tries to make it work, it all starts to seem worth at least a few trips to the counter.