A clever satire about the travails of adaptation 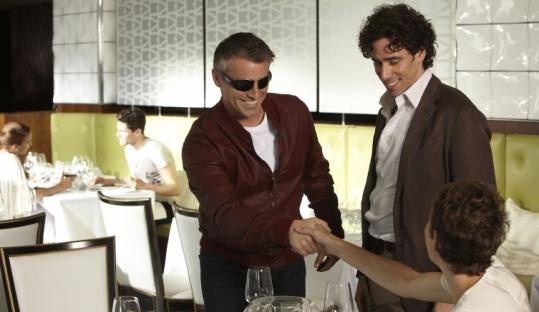 American TV has been remaking British shows for years, most notably “The Office.’’ Even “All in the Family’’ originated across the pond, as the BBC’s “Till Death Us Do Part.’’ And this month, three new Americanized British series are premiering — Showtime’s “Shameless,’’ MTV’s “Skins,’’ and Syfy’s “Being Human.’’

Occasionally the translation works beautifully, “Shameless’’ being a case in point. But often, as Showtime’s clever new comedy “Episodes’’ describes, the remake is a mess. A bloody mess.

“Episodes’’ is a breezy, knowing satire about one of those messes, when married British TV writers Sean and Beverly Lincoln (Stephen Mangan and Tamsin Greig) move to Hollywood to adapt their BAFTA-winning sitcom for a network president. Presto chango, the classy “Lyman’s Boys,’’ about a “verbally dexterous’’ headmaster at a boarding school, turns into “Pucks!’’ starring Matt LeBlanc as a hockey coach. And the lesbian character turns into a straight blond librarian who’s lusting after the coach. The Lincolns have to shut up and dumb down.

In short, they get Californicated.

“Episodes,’’ which premieres Sunday at 9:30 p.m., is a familiar goof on the vulgar side of Hollywood, as the Lincolns compromise their values for the network’s soulless staff, including the self-absorbed Carol (Kathleen Rose Perkins) and Myra (Daisy Haggard), the head of comedy who always has a sour expression on her face. Created by American sitcom writers David Crane (“Friends’’) and Jeffrey Klarik (“Mad About You’’), the show covers a lot of the same territory we’ve seen on other cynical show-biz send-ups, including “30 Rock,’’ “Entourage,’’ “Action,’’ and “The Comeback’’ from LeBlanc’s fellow “Friends’’ alum Lisa Kudrow.

But “Episodes’’ is none the less excellent for being familiar. It offers a great cast, and some very tight, tart scripting. Each of the season’s seven half-hours is a little sliver of pleasure. LeBlanc is perfect as he plays a version of himself, in the manner of Larry David on “Curb Your Enthusiasm.’’ He’s likable one minute and manipulative the next, talking about how he’ll win a custody hearing with the help of his “Friends’’ celebrity: “I’ll just give the judge a couple of ‘How you doin’s,’’ he brags. And he is consistently willing to mock his own history as a catchphrase-slinging, one-dimensional sitcom character, saying about “Pucks!,’’ “I need this to be a hit or at least something you can’t make fun of on a talk show.’’

LeBlanc plays the Lincolns off each other to his own advantage, seducing Sean with his slick car and his access to beautiful women, and provoking Beverly by pushing her politically correct buttons. Brits Mangan and Greig are remarkable as their characters fall into LeBlanc’s traps despite their intelligence. They expertly and happily bat their lines back and forth to each other — yup, like hockey pucks.