Chiklis and Benz a dynamic duo in ‘Family’ 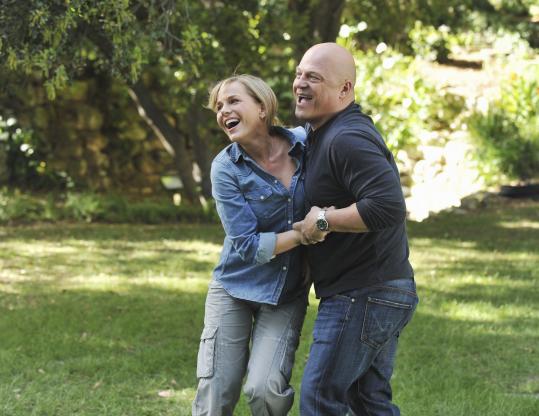 Julie Benz and Michael Chiklis as a couple with superpowers in the new ABC series “No Ordinary Family.’’ (Eric Mccandless/ABC)
By Matthew Gilbert Globe Staff / September 28, 2010

On “True Blood’’ over the summer, as on gone-by supernatural series such as “Heroes’’ and “Buffy the Vampire Slayer,’’ almost every character ultimately found a being within — a wolf, a panther, a fairy, a witch, a you-name-it. Usually, these creatures serve as metaphors of their hidden selves, the appetites and urges beneath their fleshly manifestations.

On ABC’s pleasant new dramedy “No Ordinary Family,’’ the four main characters have supernatural powers that are a whole lot happier. Their newly found abilities represent the emergence of their ideal selves and their ideal family dynamic. Frazzled working mom Stephanie (Julie Benz) can suddenly run faster than a speeding bullet, so convenient when chores are at hand. Dad Jim (Michael Chiklis), a police sketch artist, now has Hulk-like strength, helpful for a guy in the crime-solving business. Daughter Daphne doesn’t need to text anymore; she can read minds. And son JJ, a lousy student, finally has a brain — a crazy smart brain.

That’s right. After surviving a plane crash in the Amazon, the Powell family has developed talents that they’re delighted to have. While so many shows focus on the pain of the secret gifts, “No Ordinary Family’’ promises to forgo much the angst in favor of infectious celebration. They now have cool tools that help them cope with the fractures of modern life, that bond them as a family. “I think I liked us better when we were just dysfunctional,’’ Daphne says, but it’s a passing teen moment. Rather than pining to be just ordinary people again, the Powells mostly appear to find joy in their strangeness.

Naturally, that could change after tonight’s pilot, at 8 on Channel 5. It’s hard to know where the executive producers, including Greg Berlanti of “Everwood’’ and “Brothers & Sisters,’’ plan to take this show, both tonally and in terms of plot development. The pilot is entertainingly lighthearted, but in a twist that I won’t spoil here, a serialized back story begins to surface that could push the show down a more convoluted path. I’m thinking of the ugly specter of “Heroes,’’ and the way its writers strained to create a Big Mythology and wound up with a meandering jumble. “No Ordinary Family’’ is best when it keeps its sense of humor in the forefront — that always helped enormously on “Buffy the Vampire Slayer.’’ A bit of a superhero-origins arc might give “No Ordinary Family’’ forward momentum, but let’s hope the writers keep it relatively simple.

It’s great to see both Chiklis and Benz away from the intensity of their previous shows. Chiklis laughs without contempt nipping away at his smile, as it did on “The Shield.’’ As Jim feels more and more powerful, he begins to take on crime-fighting beyond his professional work, and Chiklis conveys a nice sense of giddy anticipation. Benz, sometimes cloyingly sweet as the ever-victimized Rita on “Dexter,’’ is much more appealing here as a research scientist with a solid sense of selfhood. With believable chemistry together, Chiklis and Benz help create a solid TV couple and, let’s hope, no ordinary series.