The devils next door are more boring than weird 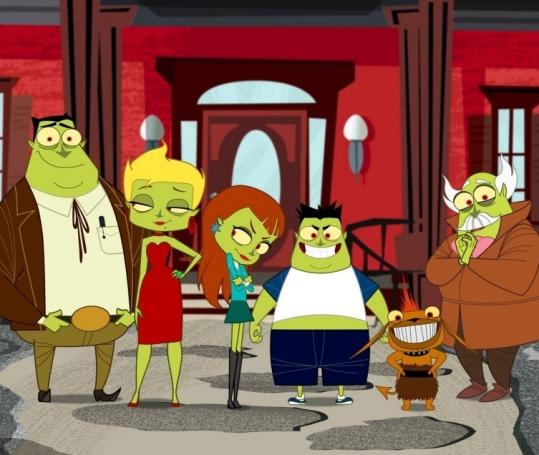 Molly Shannon and Will Sasso voice the parents of a slightly odd family in a suburban town in “Neighbors From Hell.’’ (Tnt)
By Matthew Gilbert Globe Staff / June 7, 2010

TBS’s new animated comedy “Neighbors From Hell’’ is about suburban neighbors who hail from hell, literally. The demonic Hellman family are living among humans in order to secretly prevent a greedy American oil conglomerate from drilling into their hot underworld home. Balthazor Hellman, voiced by Will Sasso, has at job at Petromundo, where he is undermining the construction of a drill capable of digging through to the center of the Earth.

That’s right, the theme of “Neighbors From Hell,’’ which premieres tonight at 10, is don’t drill, baby, don’t drill. Satan’s spawn are the ones trying to protect the planet for their own good. And the show just happens to arrive, with a few jokes about the carelessness of big oil, on the heels of BP’s monumental errors.

Too bad the bulk of the material is stubbornly humdrum, given its satirical potential. “Neighbors From Hell’’ is little more than another a fish-out-of-water comedy, with the Hellmans filling the role of the Munsters, the Addams Family, or the Beverly Hillbillies. Green-skinned, they shock their neighbors with their freaky behavior, which includes magic spells by terminally bored teen daughter Mandy and Uncle Vlaartark’s taste for cats. Unhappy mom Tina, voiced by Molly Shannon, likes to drink a bit, forever rolling her eyes at the horrifyingly tacky woman who lives next door. But — aww — Balthazor kind of likes these creatures known as human beings.

The pop cultural jokes are particularly stale. Mandy is repulsed by Ugg boots, son Josh plays the video game Torture Hero instead of Guitar Hero, and Balthazor tortures a soul in hell by forcing him to listen to Britney Spears’s “Oops!. . . I Did It Again’’ blasting through headphones. I’m not saying “Neighbors From Hell’’ needs to be as timely and spiky as “South Park,’’ but a little freshness sure wouldn’t hurt. The racial and scatological jokes are also flat and familiar. The writers are too willing to go for conventional laughs and plots again and again.

Watching the show isn’t like going through hell — it’s a lot more boring.