‘24’ ends bloodied but not beaten 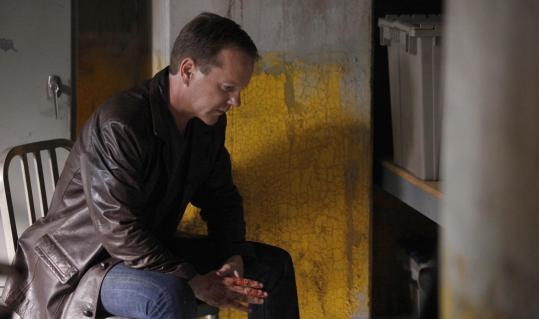 And so, not coincidentally, does the likelihood of a big-screen version of “24.’’ Indeed, last night’s two-hour series finale may be remembered as the longest movie trailer in history.

But it was on television that Fox’s espionage drama broke substantial ground over the past eight seasons, and thus it was fitting that the final TV image was one that distilled “24’’ to its existential essence: Jack alone and apart, betrayed and abandoned, bloodied but far from beaten.

While a tearful Chloe O’Brian (Mary Lynn Rajskub) watched on surveillance video, Jack — having narrowly escaped death once again — prepared to flee the country. “Shut it down,’’ Chloe finally said to an underling in the Counter-Terrorism Unit (CTU), and the screen went fuzzy, then blank. The final few seconds flashed on the show’s trademark digital clock, and it was over.

As time went by during the tumultuous life of “24,’’ there were oh-so-many reasons to shut it down and stop watching.

The leaden, exposition-heavy dialogue that seemed to have been written by a committee of earnestly patriotic robots. The ludicrous plots that violated the laws of physics and the tenets of common sense (how, exactly, was it possible for Jack to be everywhere at once?). The torture scenes in which “24’’ took an unseemly relish. The monochromatic performances (even that superb stage actress Cherry Jones, who played President Allison Taylor, seemed entombed by the house style).

Yet somehow I never could quite bring myself to tune out “24,’’ and Kiefer Sutherland was a big part of the reason. Yes, Sutherland gasped rather than spoke his lines, and one looked in vain for a flash of wit or ironic detachment in special agent Jack Bauer, or any evidence that he changed or grew along the way.

But Sutherland remained compulsively watchable because of the air of self-exile he brought to his portrayal, a bleak awareness that Jack was a man without a country even as he absorbed (and inflicted) a huge amount of punishment for that country.

Last night’s finale brought closure to a suspenseful, albeit implausible, story arc. The Russian government had arranged for the murder of President Omar Hassan (Anil Kapoor) of the (fictional) Islamic Republic of Kamistan, who had been willing to abandon his country’s nuclear-weapons program and sign a peace agreement with President Taylor. President Taylor learned of the Russians’ complicity from sleazeball former president Charles Logan (Gregory Itzin), but remained silent in order to achieve what she viewed as a once-in-a-generation chance for peace. Jack spent the final few episodes of “24’’’ fighting to expose this all-the-way-to-the-top coverup.

Sound familiar? It’s true that “24’’ was running on fumes the past few seasons, imprisoned within the formula it created. Each season seemed to bring another set of bad guys with thick accents, another mole inside CTU or the White House, another demand that Jack single-handedly stave off apocalypse.

But “24,’’ which premiered in November 2001, is a significant cultural artifact because of the way it reflected (and sometimes exploited) post 9/11 anxieties, and for the energy and innovation it brought to the serialized drama format, with events unfolding in real time and a four-screen structure that connected multiple narrative threads.

It’s worth remembering that a black president, David Palmer, occupied the Oval Office on “24’’ years before the election of Barack Obama. (After Palmer’s assassination, his brother Wayne was elected president.)

This season saw a female president and the ascension of Chloe, once just an uber-nerd with a perpetual pout and a crush on Jack, to the very top at CTU.

But it was Sutherland’s Jack who compelled our attention, partly because he battled dark forces within as well as without. Years before Daniel Craig stripped away the suavity and foppery from James Bond and restored 007’s cruel edge in “Casino Royale,’’ Sutherland created a character who was a walking volcano, indeed, a borderline sociopath. In the final few episodes, unhinged by the murder of his lover, ex-FBI agent Renee Walker (Annie Wersching), Jack crossed that borderline entirely. As he shot traitor Dana Walsh (Katee Sackhoff) dead in cold blood and disemboweled the Russian sniper who had killed Renee, he seemed driven by a zeal for vengeance more than justice.

Last night, ex-president Logan’s villainous henchman was indelicate enough to bring up that issue, remonstrating thus with Jack: “You spent your entire career outside the system, but you’ve always had good reason. This, this is just bloodlust.’’ Jack’s reply: “I would have accepted justice by law. But that was taken away from me by people like you. So you’re right, I am judge and jury.’’

And now, fugitive. A writer named David Schuman once observed: “The hero has the freedom to go anywhere but to stay nowhere.’’ That was Jack Bauer. At the end of last night’s series finale, he was on the run again, not just from the Russian government, which wants him dead, but from his own government as well.

My money is on Jack. See you in the movie theater.