The man who died trying to save the world 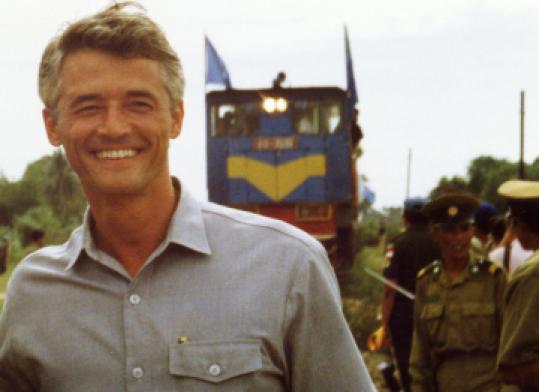 His name is unknown to most of us, but Sergio Vieira de Mello was for a time the United Nation’s rock star problem-solver who did his work in harm’s way across the globe. Before his death, in Baghdad in 2003, he was widely recognized as the go-to guy for diplomatic missions impossible.

Veteran filmmaker Greg Barker (“Ghosts of Rwanda’’) has given us a love letter to de Mello. Human rights luminary Samantha Power first wrote of his remarkable life in her biography, “Sergio,’’ and Barker based his program on her book.

If this documentary veers into hagiography — and it does — de Mello’s professional life, if not his personal one, warrants serious attention. “Sergio,’’ which airs tonight on HBO at 8, is staggering television, powerful and heartbreaking.

We hear about him from a first-rate group of talking heads — figures like veteran US diplomats Richard Holbrooke and Peter Galbraith, Condoleezza Rice, Tony Blair. We hear, too, from the two American soldiers who tried to rescue him and his fiancee, UN official Carolina Larriera, from the rubble after being targeted by a truck bomb.

You must consider de Mello’s good looks to grasp his legend, however silly that might sound. His appearance was part of his famous charisma. His smile was devastating. He kept in great shape and dressed beautifully. He was the picture of robust, on-the-ground diplomacy.

Barker anchors the program with those terrible events of Aug. 19, 2003, when de Mello was killed by the bomb detonated under his office at the UN Mission in Baghdad. Throughout the coverage of that incident, Barker cuts repeatedly back to the story of de Mello’s life. We glimpse de Mello’s childhood as the son of a Brazilian diplomat. We switch from his own diplomatic successes back to those two US soldiers, struggling without tools to pull him from the devastation of the explosion.

Their reenactment for Barker’s camera is shattering paired with video footage of the actual bombing, which is graphic and horrifying. The screen goes black as the explosion occurs in real time, and we hear sounds of suffering and chaos.

As a youth, de Mello lived the vagabond life of diplomatic offspring and spent years in Europe. He graduated from the Sorbonne and was in the Paris streets in 1968, when students fought the police. He joined the UN, which promptly sent him to Bangladesh. There he found appalling poverty and his mission in life — the fight for human rights.

His assignments would take him through an archipelago of human cruelty: Sudan, Bosnia, Kosovo, Mozambique, Lebanon, among others. His greatest triumph was shepherding East Timor, formerly part of Indonesia, into statehood. The UN made him, in effect, its viceroy, and his handling of the assignment drew plaudits from around the world. He would eventually become the UN High Commissioner for Human Rights.

De Mello’s private behavior, in contrast, was hardly commendable. He had affairs, numerous and sometimes public, and was an absentee father to two sons. “Sergio’’ doesn’t probe deeply into that side of his life, choosing instead to dwell on de Mello’s plans to marry Larriera and retire.

The program also avoids discussion of his shortcomings as a diplomat. De Mello was at times controversial. Accused by some of being too soft on the Bosnian Serbs in negotiations with them, he was chastised by others for dealing directly with the mass murderers of the Khmer Rouge. But his efforts helped pave the way for the repatriation of 400,000 Cambodians, and, whatever his lapses, his record stands.

Sam Allis can be reached at allis@globe.com