A grittier take on making it in America 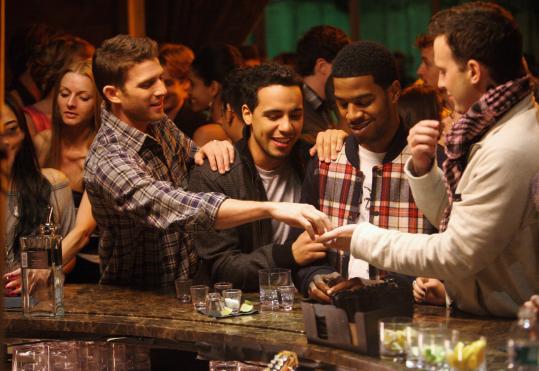 ‘How to Make It in America,’’ HBO’s new comedy, and “Entourage,’’ HBO’s much older comedy, are both about money. They’re also both about young men in the throes of the American Dream, which includes professional success and sex.

But “How to Make It in America’’ and “Entourage’’ are nonetheless extremely different shows. They’re a virtual study in opposites. “How to Make It in America,’’ which premieres tomorrow at 10, is set in the hip backwash of New York, rather than the sleek mansions of LA. It’s as street-textured a show - with shots of graffiti-strewn subway stations and tattooed skateboarders - as “Entourage’’ is limousine-bound. And the two leads - Bryan Greenberg’s Ben and Victor Rasuk’s Cam - are constantly trying to scrape together a fraction of the money that the “Entourage’’ guys drop in one night at the clubs. They’re eating street dogs, not sushi.

Which is to say, “How to Make It in America’’ does not offer the same pornographic allure of “Entourage.’’ But it has other charms, as it draws viewers into a little slice of crowded Manhattan life. Ben and Cam are hoping to make it in the fashion world, but not in the “Ugly Betty’’ elite world of Vogue and Fashion Week. They want to create their own line of jeans, which takes them to the back alleys and the docks to buy fabric and to the gruff manager of a clothing factory, who might help them put together a prototype. They’re good boys, but they’re walking close to the fringe.

By night, they’re the random guys hanging out at art openings and late parties; by morning, they’re hung over and still broke. As they try to piece together financing for their jeans project, they deal with Cam’s ex-convict cousin, Rene, an explosive guy who loans money to them with many strings attached. Rene, played by Luis Guzman with a hint of Joe Pesci from “GoodFellas’’ about him, is a comic figure, but menacing, too. Ben and Cam are clearly mixing with the wrong guy, despite the fact that he’s part of Cam’s family.

I was skeptical about seeing Greenberg - from “October Road’’ - play a guy who might wear scruffy clothes and have a little B.O.; but he pulls it off nicely. He’s a dreamer always on the verge of giving up. He’s still in love with his ex-girlfriend, Rachel (Lake Bell), but she has clearly tired of his inveterate struggle to make it on his own, his way, and she has a new boyfriend. As his former Fashion Institute professor, played by Griffin Dunne, tells him, Ben is a talented guy who’s just not very good on the follow-through. He desperately wants to reverse his luck, and he desperately wants to give up, too.

I think “How to Make It in America’’ has a lot going for it, if show creator Ian Edelman can keep from indulging in New York hipster cliches. The characters - including Rachel’s self-conscious boss, beautifully played by Martha Plimpton - have some depth, and the milieu has plenty of gritty urban poetry. It’s not as flashy as “Entourage,’’ which is appealing - but which may ultimately have an impact on whether it will make it on HBO or not.