Trio’s take on midlife is no laughing matter 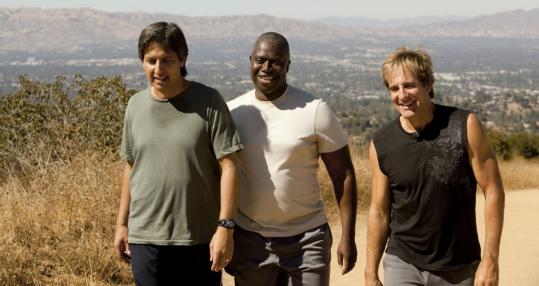 ‘Of a certain age’’ is a phrase generally attached to a woman, a delicate way of dodging specifics to imply she is middle-aged but well-preserved. “Certain,’’ of course, signifies “uncertain.’’ But when we refer to the age of older men, we are invited to be quite specific, even permitted to use digits. Men aren’t so obviously stamped with cultural freshness dates, after which they’re expendable.

By using “of a certain age’’ to refer to men, the promising new TNT series “Men of a Certain Age’’ defuses the phrase’s sexist history. The show, which premieres tonight at 10 after “The Closer,’’ is built on the truth that men, too, reach a vague point in midlife when their dreams and “marketability’’ fade while their humanity flourishes. Starring Ray Romano, Andre Braugher, and Scott Bakula, the show reframes “of a certain age’’ to mean a universal state of mind - a psychological zone of aging - rather than a somewhat cold euphemism for “too old.’’

“Men of a Certain Age’’ is written and executive produced by Romano and Mike Royce from “Everybody Loves Raymond,’’ so you are forgiven if you’re expecting their show to be a more punch line-driven, brashly male take on “Sex and the City.’’ While it includes some predictable guy banter, especially in tonight’s uneven pilot, “Men of a Certain Age’’ is a probing, occasionally bleak drama that evokes indie director John Cassavetes more than “Sex and the City’’ creator Darren Star. The writers and actors steadfastly avoid TV-bred coziness, as they push further into the difficult trade-offs that make getting older so liberating and so demoralizing. The actors are especially willing to forgo leading-man vanity in favor of emotional vulnerability, with Braugher and Romano looking particularly wasted at times.

Indeed, Romano goes far out on a limb to appear naturalistic, and it works. He is so identified with his character on “Everybody Loves Raymond,’’ it’s almost disconcerting to watch him play drama with such commitment, rarely breaking out of his melancholy to smile. I kept waiting for him to finish scenes with a wink or a cute hangdog look, and they never arrived. In the second episode, his character, Joe, is so pent-up that his playful punches at an inflatable Incredible Hulk toy turn into a rage-filled attack. It’s the kind of scene I never expected Romano to pull off successfully, the kind most TV comics - think Jerry Seinfeld - wouldn’t dare try. Romano also plays Joe’s gambling addiction with effective restraint.

Joe owns a party goods store, but his early dream of becoming a professional golfer still haunts him. Recently separated, largely due to his gambling issues, Joe is also haunted by his longing for his wife. You can see all the baggage on his shoulders, as he drags himself out of his hotel bed and stares at himself blankly in the bathroom mirror. That may sound like just more clichéd masculine midlife angst, another baby boomer thinking he’s the first person ever to face mortality; but Romano manages to make it feel honest and fresh.

Joe’s most conflict-free time is spent with his two college buddies, Owen (Braugher) and Terry (Bakula). Owen is happily married, but deeply dissatisfied with his job as a car salesman. For one thing, his father owns the dealership where he works, and he’s locked in a doomed struggle to earn his father’s approval. And then he hates being in the position of wringing out money from customers who are in financial straits. Braugher does a nice job of making the embattled Owen sympathetic - he’s softer than he was in “Homicide,’’ softer even than he was as the compassionate psychiatrist on “House.’’

Terry is the Peter Pan - every midlife story has one - who is involved with a 20-something barista. He’s the most stereotypically LA character in this LA-set show. He’s a happy-go-lucky yoga teacher and unsuccessful actor who may be heading toward a “how did I get here’’ crisis regarding his unmoored lifestyle. The anxiety is leaking through his calm, as he impulsively goes ballistic on sloppy drivers. Bakula fits the role perfectly, though initially, Terry is the most undeveloped character of the three.

Actually, there is a fourth central character: the camera. “Men of a Certain Age’’ is filmed with a hand-held camera that, as in “Friday Night Lights,’’ finds the emotional action in the scene. The choreography and pacing are loose, so the camera can explore. The atmosphere in tonight’s episode is awkward, as the untethered filming style saps much of the hour’s energy and undermines the humorous flourishes. Clearly, the creative team did not find the right chemistry until the second episode. But “Men of a Certain Age’’ does settle into a groove, and it’s a good one.