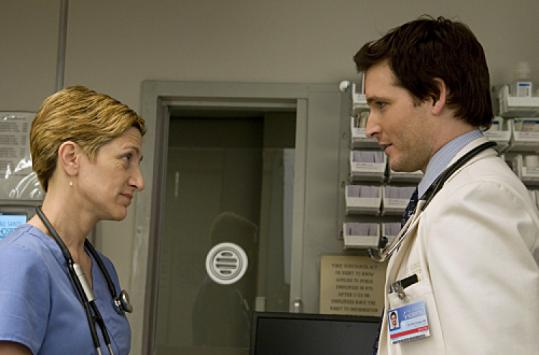 HOLLYWOOD - Peter Facinelli strolled into a Los Angeles television studio on a recent Saturday morning for another “Twilight’’-related appearance. But you wouldn’t know he was part of a worldwide phenomenon. He wasn’t flanked by brawny Hollywood-standard security guards. And there were no screaming “Twi-hards’’ lurking nearby. Just Peter and his backpack. He prefers it that way.

As “New Moon,’’ the latest installment in the massively successful “Twilight’’ saga, continues its reign in theaters, Facinelli, who plays Dr. Carlisle Cullen, the patriarch of the Cullen clan, still finds the frenzy daunting.

“There’s not many movies - I can’t even think of five - that people would camp out for,’’ Facinelli, 36, said before going in front of the camera. “It can be overwhelming. I feel very fortunate to be a part of something like that. Not many actors can say that.’’

Facinelli - who has three daughters and is married to “Beverly Hills, 90210’’ alum Jennie Garth - grew up in New York City. He began his acting career 15 years ago, with bit parts in TV shows, then burst onto the scene in the film “Can’t Hardly Wait.’’ The 1998 teen flick, which starred ’90s darling Jennifer Love Hewitt, didn’t rake in “Twilight’’ numbers, but it helped launch the careers of such stars as Seth Green, Jason Segel, and Selma Blair.

“Things were different then,’’ Facinelli said. “We were young, and in this movie teens were watching but there wasn’t paparazzi out taking all of our pictures. . . . Now, 30 seconds after a picture is taken, it’s on the Internet; and 45 seconds later, hundreds of people have commented on it.’’

He went on to star in Fox’s short-lived series “Fastlane’’ and appeared in the HBO series “Six Feet Under’’ and FX’s “Damages.’’ When his agents approached him about taking a role in a “vampire movie,’’ Facinelli was hesitant.

“I was like, ‘Um, no,’ ’’ Facinelli recalled. “I was proud of my roles up to that point. I was thinking a gory, B slasher movie. You know, vampires in caves who turn into bats. It just wasn’t my cup of tea. But I read the first book and I couldn’t put it down.’’

Two films into the saga, Facinelli has seen his life - and career - go into overdrive.

In between his “medical’’ commitments - aside from playing bloodsucking Dr. Cullen in the “Twilight’’ saga, he plays a doctor on Showtime’s “Nurse Jackie’’ - Facinelli is communicating with fans. He can usually be spotted using his iPhone, blasting tweets to his million-plus followers on a daily - if not hourly - basis.

“It’s my way of having control over what people know about me,’’ Facinelli said.

It’s a savvy attempt to combat the hysteria. While his young “Twilight’’ costars grapple with the media whirlwind attached to the vampire saga’s success, a slightly older Facinelli has a different outlook.