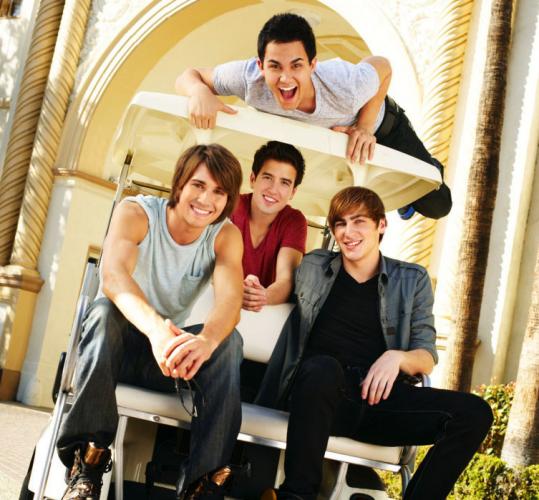 HOLLYWOOD - In the middle of everything is a pool flanked by beach chairs, palm trees, actresses, publicists, and hangers-on.

This isn’t a scene out of HBO’s “Entourage.’’

This is Nickelodeon, a kids’ channel best known for the cartoon “SpongeBob SquarePants,’’ introducing the media to the stars of its new comedy “Big Time Rush.’’

The show, which premieres Saturday, revolves around a group of Minnesota teenagers, one of whom convinces a talent scout that he and his friends have the makings of a chart-topping boy band.

Right now, the actors are answering questions on set in the fictitious Palmwoods complex of Los Angeles, a reference to the Oakwood apartments where young actors take up residence.

Kendall Schmidt, wearing a beanie, is saying the big difference between “Entourage’’ and “Big Time Rush,’’ aside from the latter’s G-rating, is that “everyone in the group is talented, not just one guy. Everyone becomes famous.’’

“Big Time Rush’’ is just one example in a growing list of kid shows selling showbiz fantasies to children. The genre is stronger than ever now and more fixated on the perks of the glamorous Hollywood lifestyle as Nickelodeon and the Disney Channel compete for the youngest audiences.

Disney airs “Hannah Montana,’’ “Jonas,’’ a comedy about rock trio the Jonas Brothers, and “Sonny With a Chance,’’ starring Demi Lovato as a budding actress and lead of her own TV series.

Now Nickelodeon is putting its spin on celebrity. After “Big Time Rush’’ debuts this week, the channel early in 2010 will launch “Victorious,’’ with 16-year-old Victoria Justice as a girl-next-door type whose hidden talents for singing and dancing are discovered, landing her in a performing arts school where the students get parts in films and are courted by music producers.

Before that, Nickelodeon had some success with “The Naked Brothers Band,’’ a tongue-in-cheek mockumentary about a young rock band.

These shows teach that fame can be a double-edged sword, of course - Hannah and the Jonas Brothers have regular run-ins with overzealous fans and try their best to lead “normal lives’’ - but they’re also wish fulfillment at a time when tabloid dreams are ubiquitous.

Part of the phenomenon stems from the kids’ networks discovering big ancillary bucks to be made in the music business. “Hannah’’ star Miley Cyrus and the Jonas Brothers are successful pop acts with No. 1 albums and huge touring business (both are signed to Disney’s Hollywood Records), while Lovato has released two solo albums. Nickelodeon’s “Big Time Rush’’ and “Victorious’’ were developed after the network struck a partnership with Columbia/Epic Label Group to produce shows that would revolve around original music.

Marjorie Cohn, Nickelodeon executive vice president of original programming and development, sees no problem in tapping into a trend that’s “timely and juicy and delicious.’’

“Every kid thinks they’re five minutes away and one lucky circumstance from being famous,’’ she said. “We’ve always responded to what’s out there in the cultural zeitgeist and spin it Nickelodeon style.’’

But Deborah Linebarger, director of the Children’s Media Lab at the University of Pennsylvania, said the issue is not so much about wanting to be splashed on the cover of Us Weekly as it is about “the unrealistic pressure wanting to be famous puts on such a young age group.’’

“Of course, there is a sense of escapism in these shows, which can be charming and magical, and that’s fine. But there’s also this sense that such achievements are possible, especially if you’re good-looking, when statistically they really aren’t,’’ Linebarger said.

Seated inside the boys’ fictitious apartment, “Big Time Rush’’ executive producer Scott Fellows said his inspiration for the series was more the Monkees than “Entourage.’’

He and Nickelodeon put together “Big Time Rush’’ (also the name of the band) through a nationwide audition. The two-year casting process yielded actors who had been paying their dues.

Schmidt, 19, began acting when he was 6 and played a young Frasier Crane on an episode of “Frasier.’’ James Maslow, 19, trained with San Diego Opera and appeared on “iCarly.’’ Carlos Pena, 20, attended the Boston Conservatory and starred in “Making Menudo,’’ MTV’s failed attempt to revive the once-popular Latin boy band via reality TV.

Logan Henderson, 20, the only member of the group without a major credit, said that even with the flashy trappings, the show isn’t about being a star so much as “seeing what it takes to get to that point.’’

“You can apply it to going to college or being an astronaut,’’ he added. “It’s about accomplishing something you want to do.’’