Young and bilingual and firing up viewers

Networks aim for US Latinos born here and there 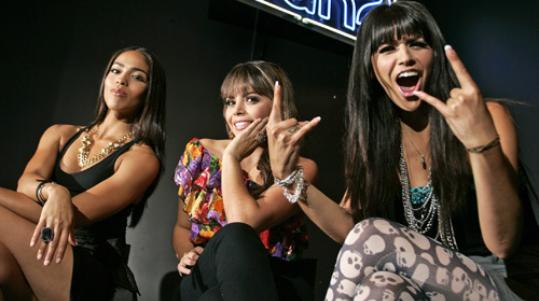 HOLLYWOOD - They say things like “Antes de la break’’ and “Mira que cute.’’ One is a clownish, Puerto Rican-born who ditched engineering studies to pursue a career in entertainment, another is an outspoken Southern California native who once had a penchant for crashing cars. The Spanglish? It just comes naturally.

They’re a new generation of Latino television personalities: young, attractive, plugged in, and conversant not only in Spanglish argot but also in a complex, shifting culture.

Their employers believe they are offering young viewers a cool, and marketable, connection to this culture. With US-born Latinos accounting for more than 60 percent of all Latinos in the country, according to recent census data, a group of bilingual networks has arisen in the last few years to tap into an audience interested in bicultural programming.

In a fragmented media environment in which young viewers can watch mainstream and Spanish-language media, channels MTV Tr3s, mun2, SiTV, and LATV aim to bridge the gap between American culture and the roots of their youthful (and sometimes out-of-touch) viewers.

In August, mun2 achieved its best numbers since it was launched eight years ago with the broadcast of the United States versus Mexico qualifying soccer match for the World Cup; the game averaged 322,000 viewers, according to Nielsen.

With the help of teen telenovela “Isa TKM,’’ MTV Tr3s (Tr3s is for tres, the number 3 in Spanish) ranked second among Hispanic females ages 12-17 for a week in August, second only to Disney Channel in the 5-6 p.m. time slot.

From telenovelas and investigative documentaries to sports programming and shows highlighting the latest in American and Latin music, the networks offer programming to compete with any network, says Jose Tillan, general manager of New York-based MTV Tr3s.

“Our audience is a hybrid of all markets,’’ agrees Alex Pels, general manager of mun2 in Los Angeles. “They’re people who live in both worlds and are comfortable in both worlds. They can tune in to a telenovela one hour and ‘Family Guy’ the next.’’

The style of these young, upwardly mobile entertainers, from their wardrobe to the shows they watch, reflects the juggling that millions face every day in an effort to maintain their Latin roots while living in the States. Born here or elsewhere, they each add a different flavor to the audience.

She may have flowing blond locks, but don’t call Pili Montilla a “gringa.’’ Just ask Akwid. The Los Angeles-based Chicano urban rap duo made the mistake - on camera - of insinuating her golden mane was an attempt to be more American.

But Montilla didn’t stay mum on-air. “I was so glad it happened that way,’’ she says. “I called them out. They’re actually digging a hole for Latinos by sticking to the stereotypes.’’

Before she was interviewing Latin music artists for LATV, Montilla was a Jane-of-all-trades in her homeland of Puerto Rico: soap opera ingenue, theater actress, radio show host, and MTV Puerto Rico personality. “I had basically done everything I could within that market,’’ Montilla says.

Carlos Santos, 28, salsa dances with Beyoncé. He does skits with Paulina Rubio. Daddy Yankee? Yup. He knows him too.

The daffy MTV Tr3s personality has interviewed them and dozens of other celebrities as host of the now-defunct “MiTRL,’’ a Latino spinoff of MTV’s music video countdown program. The first on-air talent for MTV Tr3s, he is host of “Entertainment As a Second Language With Carlos Santos,’’ which just wrapped its first season.

And you don’t have to be Latino to tune in.

“I think what we’re working toward is a situation where we don’t think in terms of color or ethnicity,’’ Santos says. “There’s a flavor that MTV Tr3s and other bilingual networks can provide to the rest of the world. We are in millions of homes; not all of them are Latino.’’

Melissa “Crash’’ Barrera, 24, adjusts her leggings so the striped sides will be captured on camera. Beside her is Yasmin Deliz, 22, who croons bits of Keri Hilson’s hit single “Knock You Down’’ as she takes a last glimpse at the show’s rundown before shoving the pages behind a pillow in the chic living room-styled set of “Crash & Yasmin Uncensored.’’

Today’s topic? Cosmetic surgery. And as the name of the show suggests, these “chicas’’ have no filters. They talk about “fake boobies.’’ Ashlee Simpson’s nose job, Crash (who got her nickname after wrecking six cars by the time she was 15) says, was an aesthetic achievement: “It did you good, girl.’’

When the duo aren’t mouthing off on bone shaving and calf implants, they’re offering their thoughts on breakups and homosexuality or taking an etiquette class and belting out “rancheras’’ on their other show, “The Chicas Project,’’ which just wrapped its fourth season.

Their outspokenness is available in English and Spanish on mun2, NBC Universal’s bilingual network. But they don’t ration their ranting to meet any language quotas.

“I’ve worked in Latin television before and they’ve said, ‘You don’t speak enough Spanish,’ ‘You sound funny when you speak Spanish,’ ’’ says Crash. “I am Latina, and there are tons of kids that are like me. Being fluent in Spanish doesn’t make you more Latina than me.’’