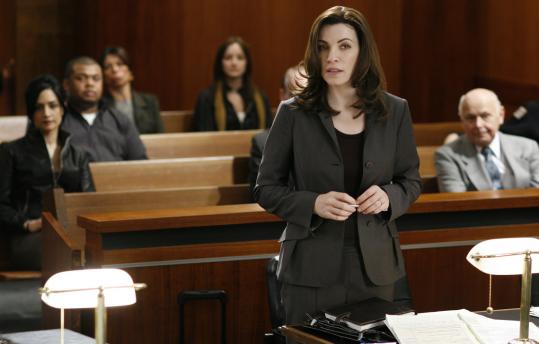 In “The Good Wife,’’ Julianna Margulies picks up the pieces after her husband goes to jail. (Eike Schroter/Cbs)
By Matthew Gilbert Globe Staff / September 22, 2009

CBS’s “The Good Wife’’ opens with what has become a common enough scene in real life to inspire a weekly TV series. Klieg lights beating on her, Julianna Margulies’s Alicia Florrick stands by her state’s attorney husband at a podium as he resigns over a call-girl scandal. While he delivers stock apologies, the cameras capture the hurt and humiliation tensing up Alicia’s blank face. Within minutes, her pain will feed the 24-hour news cycle, and the world will wonder why she didn’t just stay home.

“The Good Wife’’ is the answer to that question, to some extent. The Chicago-set drama, which premieres tonight at 10 on Channel 4, follows the struggles of a “good wife’’ and mother of two who gets figuratively punched in the gut by her politician husband (played by Chris Noth). The episode jumps ahead six months, and we see Alicia returning to work as a lawyer while her husband serves a jail sentence for misusing government funds. Will she forgive him? Should she? Can she help her teen kids cope with online clips satirizing her husband’s lusty exploits? Will her friends and colleagues ever see her as anyone other than That Betrayed Woman?

Margulies is just perfect for this role. She gets to play a mixture of qualities, rather than either tough-skinned (“The Sopranos,’’ the failed “Canterbury’s Law’’) or vulnerable (“ER’’). Her Alicia has a range of emotional reactions to what has happened to her life - shame, relief, anger, empowerment - and Margulies does justice to all of them. She adds facets to a character who isn’t necessarily complex on the page, and she avoids melodramatic excess in the process. You don’t feel her straining to seem heroic. Also, Margulies and Noth - both of whom have a similarly dark appeal - are well-matched onscreen.

Alas, if you feel a “but’’ or two coming, you would be correct. The problem I have with “The Good Wife’’ is something that mars too much TV: telegraphing. The obviousness that winds through tonight’s premiere is irritating and lazy. The script, by show creators Robert and Michelle King, practically screams its workplace issues at us, as Alicia encounters gender discrimination and ageism at her law firm. Whispering would be far more effective. Whenever Alicia deals with an arrogant younger male hotshot (Matt Czuchry), or when one of her female bosses (Christine Baranski) self-servingly urges “women helping women,’’ the writers’ points get all up in your face. That works in an op-ed cartoon, not on a TV drama.

If the inequality for professional women is subtle, you’d never know it from “The Good Wife.’’

Maybe that flaw is just a case of pilot-itis, when eager writers seem compelled to spell out what the themes of an entire series are going to be. But the other flaw in “The Good Wife’’ may be more endemic. The show wants to be a legal procedural on top of all of its other story lines, which include a possible love interest for Alicia in her co-worker (Josh Charles). There will be cases of the week, and Alicia will inevitably get too caught up in them as she strives to climb the ladder at her law firm. Tonight’s case, about a young mother accused of killing her ex-husband, is not clever or twisty, and it takes a few legally absurd leaps along the way. It doesn’t bode well. When cases-of-the-week on a TV procedural are poorly constructed, the rest of the show becomes shaky.

Still, I plan to keep my eye on “The Good Wife,’’ hoping it will calm down and realize its potential as a relevant human drama. Where do these people go when the press conference is over? Tell us that story.